October 9 2013
44
The last of the American heavy transport helicopters, the CH-46E Sea Knight (Sea Knight) from the 262 Squadron of the Marine Corps (USMC) USA, departed from the KMP Futenma airbase at Camp Kinser. Both bases are located in Japan in Okinawa Prefecture. At Camp Kinser, a helicopter will be awaiting a decision on withdrawal from service. Currently, these transport helicopters in the proportion of 1 to 1 are being replaced with the latest MV-22 Osprey converters. The complete replacement of the CH-46 Sea Knight helicopters with convertible planes should be completed in the 2014 year, at the same time the “Sea Knights” will be completely decommissioned.


Convertiplanes replacing helicopters have 2 times more speed, are able to carry 2 times more cargo and fly 4 times longer than SN-46E. The deployment of Osprey convertiplanes in Okinawa will significantly strengthen the US’s ability to defend Japan, as well as humanitarian missions for man-made or natural disasters. “Today you see here the last CH-46 helicopter in Okinawa, as well as in the entire Pacific region. The historical the flight is completing the rearmament of the 262nd squadron from helicopters to convertiplanes. This is a rather bitter day for pilots who flew these machines, which served them faithfully for many decades. However, we are pleased that MV-22 convertiplanes are replacing them in the Pacific region, ”said General Stephen R. Radder, who is the commander of the 1st air wing of the 3rd expeditionary group of the United States Marine Corps. The last helicopter SN-3 left the islands on October 46, which, of course, is a very exciting day for all those who flew the Sea Knights in Vietnam and Iraq, as well as other regions of the planet. These helicopters saved a huge number of lives, and the memory of this machine will remain for many years to come, emphasized the American general.

Helicopters will replace much more sophisticated machines - convertible planes MV-22 Osprey, which combine the functions of a helicopter and an airplane. This is achieved by the fact that they are equipped with a swivel wing, which is equipped with a propeller. At the same time, such a solution creates its own difficulties in controlling the aircraft; there have already been cases when even small mistakes in management led to the downfall of the convertoplane. And not all the residents of Okinawa, who live in the area of ​​US military bases, are pleased with this decision. A year ago, they opposed the deployment of American convertiplanes on Okinawa. However, neither the residents nor the government of Okinawa Prefecture, nor the government of the country could not impede the plans of the American marines. The only thing that Japan could do in this situation was to achieve a promise that the MV-22 flights would be limited above populated areas, and the tiltrotor pilots would try to maneuver as little as possible while the car was in an unstable position. 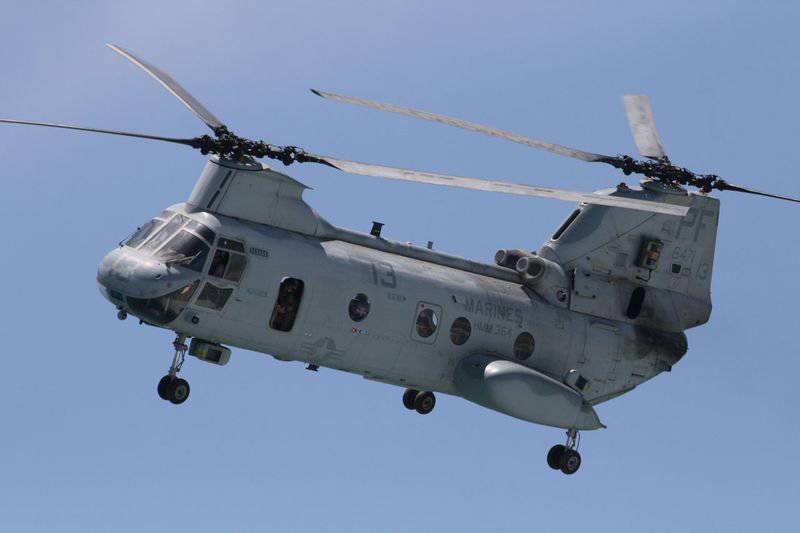 The CH-46 helicopters first distinguished themselves during the Vietnam War, especially in the hard battles at Khechani. Taking off from coastal bases in adverse meteorological conditions, helicopters flew throughout the vast field of hostilities. They constantly delivered resupply and cargoes to the base, took out the wounded, often making instrument flights, blindly, under strong enemy fire. Protracted military operations in the Kheshan military base area became a very serious test for the crews of helicopters and ground support personnel. As a result, the Vietnamese still lifted the siege of the base and retreated. Considerable merit in this victory was also with the CH-46 helicopters, as well as the resilience of their crews.

CH-46E Sea Knight helicopters have been in service with the American army since the 1962 year. Since then, more than 600 machines have been built. By the middle of the 90-s of the last century, the CH-46E helicopters were in service with the US Marine Corps 17 squadrons. During their very long combat service, these machines were able to win the love and trust of their passengers and crews, as evidenced by one of the helicopter's nicknames - “frog”, as well as the saying “never trust a helicopter that is not 30 years old”. The US Navy finally removed these helicopters from service in the 2004 year, replacing them with the SH-60 helicopters. KMP USA is engaged in their replacement gradually, it is planned that the MV-22 Osprey converters will completely replace the “Sea Knights” not earlier than 2014 of the year.

The Boeing Vertol CH-46 Sea Knight military transport helicopter was designed to be based on aircraft carriers and the US Marine Corps, equipped with a system of folding the blades of two rotors and special equipment for flying in difficult meteorological conditions. As part of the design work on the study of a commercial transport helicopter with 2-turbine engines, a longitudinal scheme with 2-rotors was selected. The development of this scheme was fully owned by Vertol. For their new helicopter, American engineers chose twin turbine engines, which were constantly improved and provided the machine with very good power density. 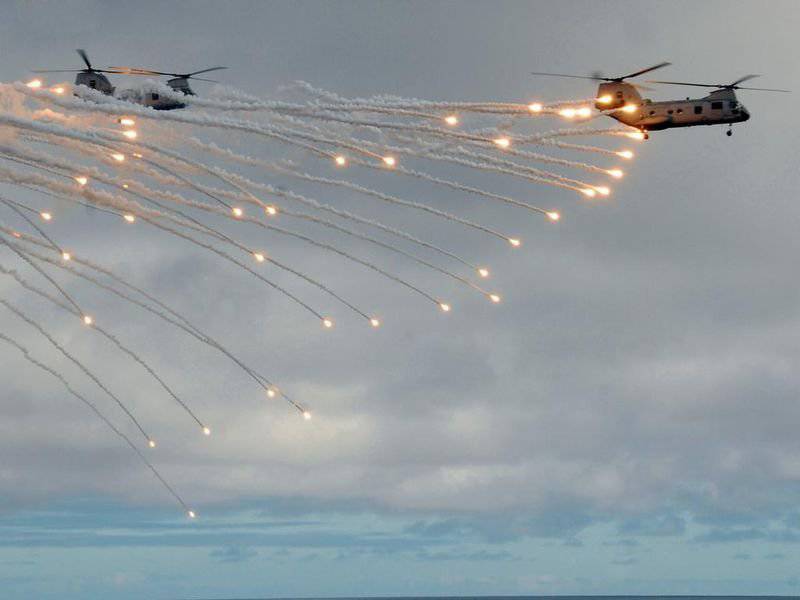 The engines were located above the fuselage at the rear end of the cabin to ensure maximum internal space and reduce noise. In order to speed up loading and unloading operations, the CH-46 helicopter's oblique tail section of the fuselage was a ramp that was quite strong for direct loading of bulky goods and / or vehicles. The hermetic fuselage of the helicopter was divided into compartments, it allowed to take off and land both from the earth and from the water surface.

Externally, the CH-46 helicopter very much resembles the CH-47, however, it has a smaller size and a three-point, non-retractable landing gear instead of a four-bearing chassis. The fuselage of the helicopter is made waterproof, which allows, if necessary, to land on water. The rotors of the helicopter are three-bladed. Two engines are located next to each other in the rear rotor pylon.

Protected fuel tanks are installed in the side fairings and provide the car with stability during landing. The helicopter also has a loading / unloading ramp at the rear of the fuselage. A hook mounted in the floor of its cabin makes it possible to carry loads of up to 4,5 tons on an external load.

The CH-46 is a twin-screw longitudinal helicopter with a three-bearing chassis, two engines and a semi-monocoque all-metal fuselage. The helicopter fuselage is made of aluminum alloys. In versions of the helicopter: transport, multipurpose and military has a retractable loading and unloading ramp, which forms the bottom surface of the rear fuselage. On the passenger version of the CH-46, a ramp replaces a retractable luggage container, in which you can easily place luggage up to a total weight of 680 kg. 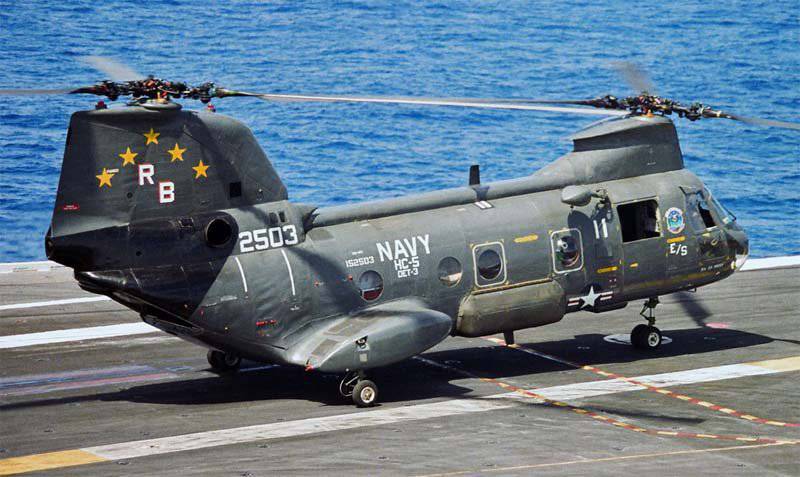 Depending on the version, a combined door is installed in the passenger or cargo cabin: the lower part is tilting, the upper part is sliding. On the floor of the cargo compartment is 2 of a number of rollers for the movement of heavy loads, as well as a winch for their lifting, the estimated effort of the winch is 276 kg. A special hook is mounted in the cab floor for the carriage of goods on the external sling; with its help, the helicopter can transport more than 4,5 tons of cargo. In the airborne version of the CH-46, the Sea Knight is able to take on 25 soldiers, and in the 15 sanitary version, the wounded soldiers on stretchers and 2 paramedics.

The cabin of the helicopter is equipped with a standard heating system. To ensure buoyancy when landing on the water, the helicopter fuselage was made waterproof, the transverse stability of the CH-46 is ensured by the use of side skirts, in which fuel tanks are located. The helicopter's landing gear is non-retractable, three-axle, the wheels on it can be replaced with skis.

Both rotors are three-bladed, metal blades with hinged fastening. The blades are folded using the hydraulic system. Helicopter engines, located close to the rear rotor pylon, have air intakes with an annular inlet duct and anti-icing system. The fuel system of the vehicle consists of 2-X retrofit tanks in side fairings with a total capacity of 1325 l. The total fuel capacity of helicopters with increased flight range can reach 3785 l. Additional fuel tanks in this case are mounted on the sides of the fuselage. 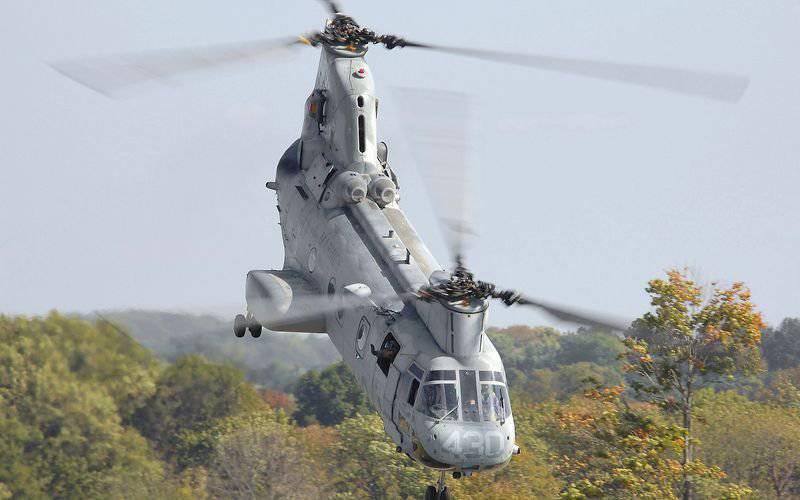 The control system is duplicated hydraulic, the control of the rotors is provided with the help of 3-x hydraulic boosters (for each screw). The additional equipment of the helicopter includes automatic flight control, stabilization, balancing systems, the TACAN navigation system and a duplicated system for improving stability. The electronic equipment of the machine consists of Doppler radar and standard navigation equipment for instrument flight.