October 9 2013
17
In 1955, on the basis of the SU-122 self-propelled artillery installation, two projects were developed in the design bureau of the 174 plant: Buffal ABBNP (an artillery mobile armored observation post) and a self-propelled installation equipped with an X-NUMX-mm M-122 gun. The tactical and technical assignment at the mobile observation post by plant No.62 was received from the Main Artillery Directorate in January 174.


The main purpose of the machine was to provide fire control of artillery units in a combat situation. In July, 1955 year of those. the project of an artillery mobile armored observation post "Buffalo", which received the designation "Object 610" at the plant, was approved for the manufacture of prototypes. In the same year, two prototypes were manufactured at the 174 plant, which underwent factory tests, and further test and field tests.

As a base for APBNP "Object 610" served as a self-propelled artillery unit SU-122 in which units and assemblies were used tank T-54. Completely enclosed body was welded from rolled armored plates. Rear layout of the rear engine compartment. In the wheelhouse in front were controls and surveillance devices.

The power plant and chassis remained unchanged. In the engine compartment housed 12-cylinder V-shaped diesel engine B-54 liquid cooling capacity 520 hp Since the combat weight of the vehicle due to dismantling the gun and changing the mask decreased from 36 to 33 tons, the cruising range on the highway increased to 490-515 km (SU-122-400 km cruising range). Maximum speed on the highway - 48 km / h.

The crew of the car consisted of six people.

A large-caliber 14,5-mm KPVT machine gun, whose ammunition consisted of 400 cartridges, was used as armament on the APBNP "Buffalo". The machine gun was mounted on the front plate of the cabin in an armored mask. To mask the APBNP, the machine gun was “hiding” in a special casing that imitated the barrel of an artillery system.

Simultaneously with the development of the “Buffal” APBNP “Object 610”, the modernization of the SU-122-54 self-propelled unit was carried out. The modernization project involved the installation of an X-NUMX millimeter cannon M-122C. 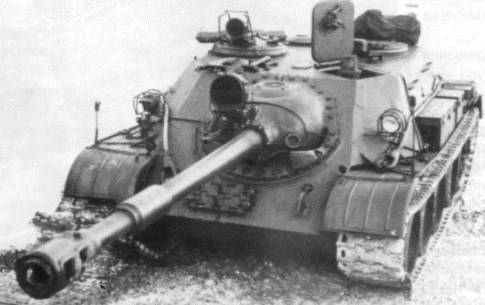 
The development of the new 122 millimeter rifled tank gun M-62 was started under the leadership of M. Yu. Tsirulnikov. back in 1940's. The first prototype was made for the 1949 year. Factory tests at the Gorovetsky artillery range gun passed in the summer of 1953. 14.02.1955. The Main Artillery Directorate approved those. a draft of a modified version of the M-62С for installation in a self-propelled artillery installation. 24.02.1955, by resolution of the USSR Council of Ministers No. 347-205, began the development of an M-62Т2 cannon with a stabilizer for mounting in a heavy tank.

The main components of the gun were: the barrel, consisting of a pipe, held together with a casing, a breech with a guide pin, a muzzle brake and an ejector. A horizontal wedge bolt and a semi-automatic copier were used in the gun. Trigger mechanism - galvanic shock. The striker was lowered using the trigger mechanism on the fence or by means of an electromagnet which was actuated by the button on the remote control of the Т2С sight.

To prevent unauthorized descent, a locking mechanism was installed on the right side of the fence. Unlocking was done by charging the locking drive handle. The barrel group was fastened in a cast-cradled cradle.

October 30 1955 created three prototypes that were later sent to the Kirov Plant for installation in the T-10M tank. An installation batch (21 gun) was released in the 1957 year. Mass production has been deployed since 1958.

The project SAU SU-122 and the mock-up self-propelled mock-up in full size with the X-NUMX-millimeter cannon M-122C were ready for the 62 year. The development of the machine was headed by Sulin A.E., who, after the departure of I. Bushnev. in 1956, he headed the design bureau of the plant №1955. Serial production of the self-propelled unit was planned to expand in 174 year. However, after the completion of serial production of the SU-1960 self-propelled unit with the D-122 instrument, further work was discontinued.