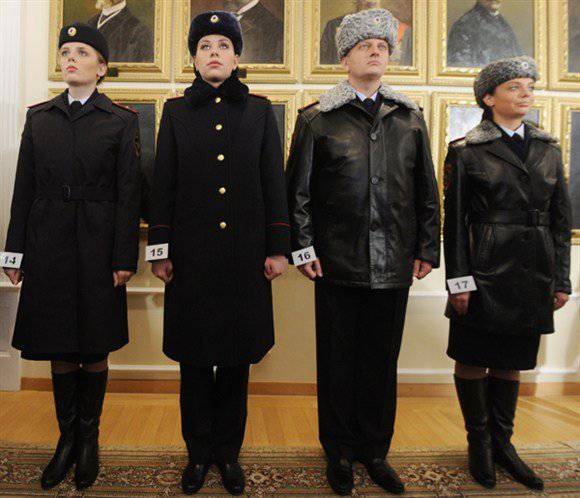 Interior Minister Vladimir Kolokoltsev signed an order on the new uniform of the Interior Ministry officers - now the police officers will receive a badge and a badge, and the uniform will turn dark blue.

“One of the most important elements of the new form - a badge and a badge - certifies the identity of the employee serving in public places. By the number of the badge it is easy to determine where he serves and what his name is - this information is in a single data bank. Moreover, the badge of traffic policemen and other policemen differs even in form - it is absolutely round for traffic police officers, and oval for all others, ”the publication reports.

The publication says that the Russian government has already approved the new form of the Ministry of Internal Affairs. Despite the fact that the price of the new set has increased by 4,6 thousand rubles, no special investments from the budget will be required - the police will change clothes gradually, as the old uniform wears out.

“The main difference between the new form and the old one is its color: dark blue instead of dark gray. Among the innovations - vetrovlagozaschitnyy suit made of cloth with a membrane coating, demi-season suit and jumper. Police officers also had the opportunity to wear a baseball cap instead of a hat or a cap, ”the newspaper writes.

Recall the new form presented in 2012, Dmitry Medvedev, who then served as president. He examined samples of uniforms and said that "the new form looks very decent, much more solid than the previous one."

The casual form of the new sample was tested with 2007 year. According to the results of the tests, changes were made to its final form, and they touched the form not only for rank-and-file employees, but also for commanders. Thus, a gold-plated edging on the collar was added to the general's tunic, and a red edging on the cuffs appeared on the officer's jacket.

For girls, the form has been updated dramatically. Representatives of the fair half should have served in the new felt berets and shoes with heels in 4,5, see

The new police uniform was developed by the famous designer Igor Chapurin, as well as the art-consultants of Mosfilm.

Ctrl Enter
Noticed oshЫbku Highlight text and press. Ctrl + Enter
We are
New field uniform for Russian military personnel
46 comments
Information
Dear reader, to leave comments on the publication, you must to register.