October 9 2013
59
A characteristic feature of local conflicts in recent years have become the so-called. technicals - cars with weapons installed on them. In view of artisanal origin, any suitable vehicle on which any existing vehicle is mounted can be used as a base for such a combat vehicle. weapon. Various armed formations build “technicals” with machine-gun, cannon, and sometimes rocket weapons with their own forces. As practice shows, such equipment, if properly used, can have a noticeable effect on the course of military operations. Seeing certain successes of “technicals”, the Russian Scientific and Production Enterprise “Start” (Yekaterinburg) decided to create its own version of such equipment based on more serious components, originally intended for the conduct of hostilities. 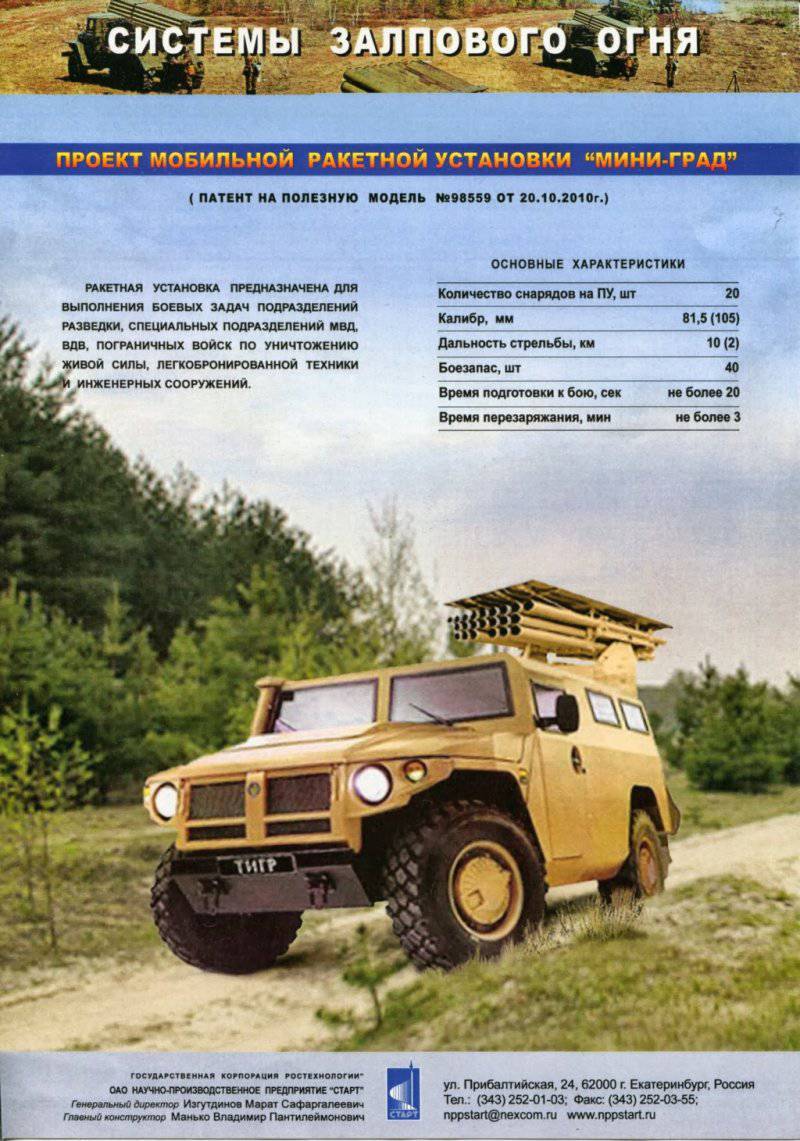 At the exhibition Russian Arms Expo-2013, SPE “Start” distributed advertising materials on its new development. The project "Mini-Grad" involves the creation of a multiple rocket launcher system based on an affordable car chassis. For example, in the promotional materials there is a combat vehicle based on the domestic production of the Tiger armored car. Probably, at the request of the customer, any other vehicle with suitable characteristics can become a base for a combat vehicle.

Unfortunately, very little is currently known about the Mini-Grad project. In fact, only the image of a hypothetical combat vehicle and some characteristics of its weapons were shared. Nevertheless, such scant information allows us to present an approximate image of a combat vehicle, as well as to make some assumptions about its prospects.

On the single image of the small-sized MLRS, it is clear that a relatively small launcher with guides for unguided missiles is proposed to be mounted on the base car. In the dimensions of the car "Tiger" you can enter a combat module with 20 guides. Caliber unguided rockets - 81,5 or 105 millimeters. Thus, the release of two variants of multiple rocket launcher systems using different ammunition is possible. The claimed range is equal to 10 kilometers. The prospective combat vehicle will spend about 20 seconds to prepare for shooting. Ammunition "Mini-City" is 40 missiles. On a full reload launcher, it is claimed, should take no more than three minutes.

According to advertising materials, the MLRS Mini-Grad is designed for reconnaissance units, units of the Ministry of Internal Affairs, airborne and border troops. The mission of a combat vehicle is the destruction of manpower, lightly armored vehicles and enemy installations. Thus, the new combat vehicle should significantly increase the combat capabilities of the relevant units. However, the appearance of the Mini-Grad system is significantly different from other MLRS, which can cause a lot of questions.

From the available information we can draw some conclusions. Obviously, the Mini-Grad multiple launch rocket system has both positive and negative sides. This ambiguity of the project may be the reason for the mass of disputes.

The advantages of a combat vehicle include its firepower. A volley from 20 unguided missiles will allow Mini-Grad to carry out tasks of the types that were previously assigned to "full-fledged" multiple launch rocket systems. In this new MLRS, with small dimensions and relatively good mobility, is able to quickly approach the target at a distance of shooting and open fire. Thus, the main task of the Mini-Grad complex can be attacks of small targets with relatively weak defense.

Features of the armament of the MLRS "Mini-Grad" can cause some doubts about the feasibility of the existence of such combat vehicles. An armored car with a launcher for unguided missiles is in itself a rather strange thing with mixed perspectives. For example, the role of such equipment in the structure of the armed forces or security forces raises great doubts. Due to its characteristics, the new Mini-Grad will not be able to replace multiple launch rocket systems of existing models and perform their tasks. Thus, for the new MLRS, there are only tasks whose solution is connected with the hit-and-run method.

A separate issue in the context of the potential and prospects of the new MLRS "Mini-Grad" is the choice of goals and operations in which it can be applied. Probably, a considerable number of targets, the destruction of which can be entrusted to the calculation of such equipment, can be attacked by other means, including barreled artillery and Aviation.

In general, the Mini-Grad project, as well as its prospects, currently raises a lot of questions and does not provide the desired number of answers. At the same time, in a number of cases, the operation and application of such equipment looks unreasonable and useless. Thus, such "mini-MLRS" are unlikely to take any place in the Russian armed forces. At the same time, this class of equipment, due to the combination of size and firepower, may be of interest to the airborne troops, who need compact and light combat vehicles.

In addition, RZSO of this type may be of interest to third countries. In the course of local conflicts in recent years, improvised combat vehicles armed not only with receiver systems were actively used. On the battlefields from Transnistria to Syria, civilian vehicles were sometimes encountered, with guides mounted on them for unguided rockets. For all its specifics, such a technique can significantly increase the combat capabilities of the formation, equipped with "technicals" with machine-gun armament. Thus, the Mini-Grad project may be of interest to small, poor countries that need the cheapest possible upgrade of the armed forces.

It is difficult to say which countries will be interested in the Mini-Grad multiple launch rocket system. Judging by the available data, the new project has several characteristic advantages, but it is not without flaws. Because of this, the potential customer will have to evaluate the cumulative characteristics of the combat vehicle and draw conclusions about the need for equipment with such capabilities. It is possible that the first proposals for the purchase of the MLRS "Mini-Grad" will appear in the very near future. However, the specific appearance of this combat vehicle does not allow us to speak of this as the most likely scenario. Hopefully, the near future will allow us to find out how correct and necessary the Mini-Grad project is.