Gai Borisov: “The Crusade is the opposite”: the expansion of the “jihadists” cannot be stopped by police methods 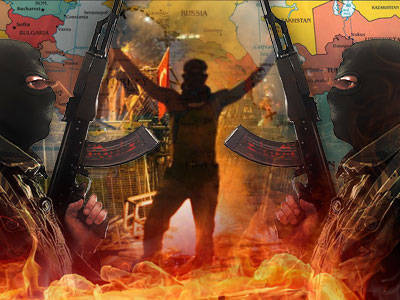 The global financial and economic crisis that has been going on for five years has aggravated, as usually happens in such cases, the geopolitical confrontation of the main centers of power and the struggle for the expansion of spheres of influence. This, in particular, affects the situation around the EU Eastern Partnership program, the ultimate goal of which is the absorption of a number of former Soviet republics into the zone of influence of the West. The situation in the countries of the Near and Middle East takes even more acute forms. And this raises questions about the need to revise the traditional, customary forms of coexistence of powers in the permanent competition mode.


The fact is that the so-called The "Arab spring" was only a kind of "trigger", giving rise to very ambiguous and potentially extremely dangerous trends. In this regard, it begs historical analogy. When at the end of the XI century, Pope Urban II at the Clermont Cathedral called for a Crusade against the "infidels", he did not even hide that, in addition to ideological (the liberation of the Holy Sepulcher), there are also quite pressing economic reasons for expansion to the East. The situation in Western Europe was deplorable, the available productive forces and industrial relations have exhausted their potential, and this is against the backdrop of increasing demographic pressure. And the Pope spoke quite frankly in the sense that Europe is no longer able to feed its growing Christian population, therefore, it is required to conquer new, rich lands in the East.

It seems that something similar is happening in our days, only expansion has a reverse vector. And this is quite understandable, since in the Near and Middle East there are exactly the same circumstances that once caused the Crusades and other colonial, regional and world wars. Many countries in the region have dropped out of the mainstream of the development of a post-industrial society; traditional methods of farming do not allow for a decent life for a significant part of the rapidly growing population, half of which, moreover, is young people.

This, in turn, explains why, in the course of the “Arab Spring”, instead of the expected democratic forces, religious fundamentalists began to replace the authoritarian regimes. Any totalitarianism offers easy (and therefore impracticable) solutions for solving complex problems, but it is precisely the seeming ease that attracts numerous followers to the teachings and movements of this kind. What is happening now in Syria is a clear confirmation of this.

The "democratic opposition" raised by the West in the face of the "National Coalition of Syrian Revolutionary Forces" is losing popularity before our very eyes. Its combat units are massively declaring the transfer to the side of the radicals directly associated with al-Qaeda. The other day, this quite obvious circumstance was recognized by the Russian Foreign Ministry. Deputy Director of the Information and Press Department, Maria Zakharova, in particular, stated that the balance of power in the ranks of the opposition in Syria is resolutely in favor of the Islamists. In this regard, the Foreign Ministry calls for "a more realistic look at what is happening on the Syrian land."

It seems, however, that this call was late: there is already evidence that al-Qaeda is going to oust all its opponents - both government troops and “secular opposition” units from a number of areas at the junction of Syria’s borders with Iraq and Turkey where he plans to create his own state - a prototype of the future of the Caliphate. Undoubtedly, the danger felt in Washington - and also too late. CIA instructors began training militants for "secular opposition" units in Jordan. But, firstly, according to the American media, the scale of this program is small, for the current year no more than a thousand fighters were trained, and they were trained, as it turns out. the most elementary things - what we call the "young fighter's course", i.e. - the basics of military affairs. Secondly, there is no guarantee that, once in Syria, these people do not immediately go over to the side of the radicals.

A significant part of the fighters of radical groups are, as you know, foreign mercenaries. President Bashar Assad believes that there are currently thousands of mercenaries fighting in 10 in Syria and does not rule out that at one point, the “moderate” Syrian rebels will ask official Damascus to help them resist the advancing Islamists.

Such a development is unlikely, but not completely excluded. The problem, however, is that even this will be a belated step. Another very dangerous abscess is brewing in parallel in Afghanistan, where the existing government will sit on the bayonets of the soldiers of the international peacekeeping corps as much as they will remain in this country. Meanwhile, as is known, the withdrawal of coalition forces from Afghanistan has already begun. In April next year, the country will hold presidential elections. And it is more than likely that the well-known and influential religious fundamentalist Abdul Rasul Sayyaf will be elected head of state, and the main field commander, Ismail Khan, will become the first vice-president. Imam Sayaf is a very conservative figure, and there is no doubt that with his help Afghanistan will instantly turn into a Sharia state. By the way, IA REGNUM has already reported that at least the fact that the leading Islamist terrorist group operating in the Philippines speaks of its views speaks about the views of this confessor. He once helped Osama bin Laden to move from Sudan to Afghanistan, and the organizers of the September 11 attacks of September 2001 were his students.

Essentially, all this means that al-Qaeda (as a collective concept) will extend its influence from the shores of the Eastern Mediterranean to the spurs of the Hindu Kush. And this is only for the beginning, because there is no doubt that the expansion of the “jihadists” (that is, a kind of “Crusade on the contrary”) will expand and gain strength.

However, it seems that the true meaning and consequences of such a development are assessed superficially. For example, the other day in Yerevan, where the Canal-Caucasus anti-drug exercises, Director of the Federal Drug Control Service of the Russian Federation Viktor Ivanov, were held in the framework of the CSTO, said, in particular: "We understand that this was once there ( in Syria - ed.) will end, and therefore, the army of legionnaire mercenaries, losing their jobs there, may rush into the Caucasus, especially since there are "gold-bearing" streams of hashish and heroin. By riding these streams, they will receive even greater income, what they get for participating in the hostilities in Syria. " This is an erroneous approach - just as it is mistaken to assume that after completing military training in the ranks of the Syrian radicals, their Russian counterparts "just" return to their homeland and join the Wahhabis of the North Caucasus and Volga region.

It is time, finally, to understand that "there" will not end by itself. It is time to understand that this is not about the "return" of several hundred mercenaries and / or a quantitative increase in drug trafficking. The real prospect is much darker. The times when the “struggle against the wrong” was conducted by scattered radical groups led by semi-literate field commanders are passing (if they have not left) into the past. In place of them come the structure of the state level. And, by the way, the success of fundamentalists in the Middle East is largely due to the fact that they are provided with effective support by some states of the region - for example, the Wahhabi Saudi kingdom. The number of such centers of state ideological expansion, as we see, may soon increase substantially. And this means that it is no longer necessary to resist such prospects with traditional police methods. Combating the ideology and practice of state terrorism requires an action of an appropriate scale.

It seems that the great powers and secular regimes of the region are obliged in this situation at least temporarily to unite their efforts, despite all the existing differences and the usual geopolitical competition, since the times are approaching very unusual. After all, the concept of a zone of geopolitical influence is by no means exhausted today by the levers of a military-political and economic character that a country possesses. No less important is the ideological, spiritual aspect, because it is the spiritual component, as already mentioned, that plays a very large role in the spreading offensive of the radicals. And the sooner this is understood by the main actors and performers on the world stage, the sooner the appropriate conclusions are drawn and the necessary measures are taken, the more hopes that the imminent danger can be overcome.

Ctrl Enter
Noticed oshЫbku Highlight text and press. Ctrl + Enter
We are
The world we leave, the world we enter, and the world between themFinancial and political secrets of Oleg Pyagnibok and Vitaly Klitschko
Military Reviewin Yandex News
Military Reviewin Google News
71 comment
Information
Dear reader, to leave comments on the publication, you must sign in.