October 9 2013
233
October 27 2013 will hold presidential elections in Georgia. According to the Georgian constitution, the current president, Mikhail Saakashvili, does not have the right to take part in them. The same Mikhail Saakashvili, who considered Georgia’s entry into NATO and the European Union as one of the main goals of his presidency. As is known, the current Georgian president failed to achieve either one or the other, which hurts Saakashvili’s pride. Quite recently, Saakashvili, standing behind the podium of the UN General Assembly, tried to write off all of his political and economic failures in the spirit of individual psychosis to the machinations of the Russian authorities and FSB agents. Now that the time for the political maneuvers of the “lame duck” is getting shorter and smaller, she (the “duck”) is apparently switching to the last attack on the Russian Federation.


This offensive looks like a call for Georgian athletes and the Georgian Olympic Committee to boycott the Sochi Olympics. Saakashvili, you see, preoccupied by the fact that one of the torchbearers (a person participating in the Olympic torch relay) in Russia was selected pilot Ivan Nechaev, who at one time participated in an operation in the skies over South Ossetia and Georgia. The Georgian president, once again demonstrating the painful suspiciousness towards Russia, declared that Moscow had chosen a military pilot - Hero of Russia as a torchbearer - deliberately chosen - to annoy Georgia.

President of Georgia:
I am sure that all this was done intentionally, just as the fact that the delegations of Abkhazia and the so-called will bring to the Olympiad. South Ossetia. They will lead the guests of the Olympiad on excursions to Abkhazia, use the infrastructure of Abkhazia without our permission.

Based on the Russian imperial inferiority complex, he (Putin - approx. Author) will do everything to trample Georgia into the mud.

He uses the Winter Olympic Games to popularize the idea of ​​Abkhazia and the Tskhinvali region. I urge everyone to make their decision. I do not exert pressure on the Olympic Committee - it is up to them to decide. But they are Georgians, in addition to representing the Olympic Committee, and they must have the right reaction.

What Mr. Saakashvili means by the “right reaction” is understandable. By the way, the phrases used by the current Georgian president are another assessment material by professional psychiatrists. Just “using the infrastructure of Abkhazia without our permission” is worth it!

It’s not the same military aircraft that was driven by Ivan Nechaev, during the roar of the engines of which Mikhail Saakashvili became ill and he, covered by body armor and bodyguards, crashed to the ground in August of 2008. If this is the same pilot, then the position of Saakashvili on torchbearer looks even funnier ... 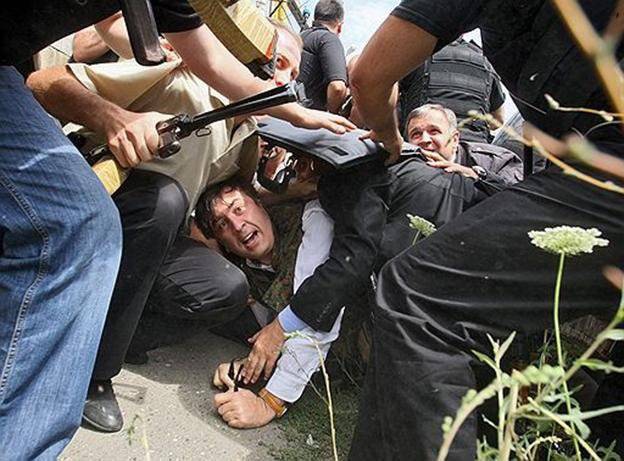 And the fact that the president calls athletes and sports officials to the "right reaction" (in fact, to boycott the Olympics), in our time does not even look like another Cold War syndrome, but a manifestation of complete political impotence of Saakashvili. Instead of sending a rational policy in Georgia, its president is studying the lists of participants in the Russian Olympic torch relay and abundantly reflexes about it ... Find yourself a business, Mikhail Nikolozovich.

In the meantime, Saakashvili, who, by the way, declared that his country will be admitted to NATO no later than 2014, is practicing new marasmic rhetoric, an inspection team of the North Atlantic Alliance arrived in Georgia. This is a team of NATO officials who should receive documents from the Georgian authorities, which reflect how clearly the “instructions” of Brussels and Washington are being carried out in Georgia. An important component is the focus of the commission’s work not only on checking the military sphere, but also on assessing the activities of several branches of the Georgian government. This, in particular, said the chairman of the committee on defense and national security of the Georgian parliament Irakli Sesiashvili. Quote:

We will go with representatives of NATO practically all topics related to the activities of the executive and legislative authorities ... we are doing this primarily to strengthen and democratize the country.

It turns out that in order to strengthen the democratization of the country, official Tbilisi needs and needs that certain people from the military bloc arrive in the country and lift their thumb (or not) up. NATO officers arrived - already a balm for the soul of the main Georgian democrats - it means that everything goes according to plan ...

An interesting fact is that all the materials collected in Georgia will be presented by the NATO commission directly to General Secretary Rasmussen, and he will read the documents and quote: he will forward the recommendations to the Georgian leadership.

To descend to the level at which the military alliance officials hand out “recommendations” to the leaders of a country, you should be able to. Apparently, the Georgian leadership mastered this letter “perfectly”, and reached the level mentioned ... By the way, not only the NATO Secretary General, but also representatives of the countries that are in the alliance will give recommendations to the Georgian authorities. This was stated by the representative of the NATO delegation in Georgia, Christian Mesarosh. Only here the phrases “hold on, Misha, you and I” will not be exactly in these recommendations ... The 27 number is not far off at all ... In this regard, NATO will definitely be thinking about what, and to whom, actually, to give our recommendations ...

Ctrl Enter
Noticed oshЫbku Highlight text and press. Ctrl + Enter
We are
The last exhalation of Mr. PZH: Saakashvili behind the UN UN tribune brands RussiaParadoxes of Georgia, or the Red Card to Mikhail Saakashvili from the Georgian people
Military Reviewin Yandex News
Military Reviewin Google News
233 comments
Information
Dear reader, to leave comments on the publication, you must to register.