What issues is the Russian delegation discussing in Kyrgyzstan?

October 9 2013
20
October 8 - literally the next day after a visit to Tajikistan - the Russian delegation led by State Duma Speaker Sergei Naryshkin arrived in Kyrgyzstan. 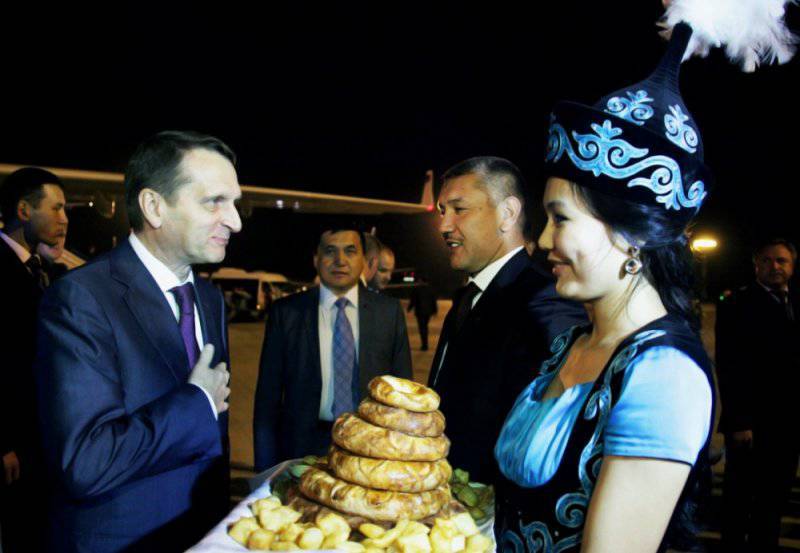 A visit to this country ends with a Central Asian tour, in which, besides Naryshkin and his advisers, take part Leonid Slutsky (chairman of the Duma committee on CIS affairs and relations with compatriots), Konstantin Kosachev (head of the Federal Agency for CIS Affairs), Konstantin Romodanovsky (head of the FMS of Russia), Vladimir Kalanda (First Deputy Director of Federal Drug Control Service), Viktor Zavarzin (First Deputy Chairman of the State Duma Committee on Defense), Vladimir Pekhtin (Deputy Chairman of the Management Board of JSC RusHydro, the very one who since February 2013 first mixed success trying to prove that undeclared property in Florida belongs not to him but to his son, then resigned the deputy, but, apparently, did not stay without work). In Kyrgyzstan, the Russian delegation was joined by the Russian ambassador to Kyrgyzstan, Andrei Krutko.

The composition of the Russian delegation, in principle, speaks for itself, in fact revealing the range of issues that will be discussed in Kyrgyzstan: the development of relations between Russia and Kyrgyzstan, the problems of the spread of drugs, the construction of hydraulic structures in Kyrgyzstan, and migration policy. Certain informational additions were made by the head of the delegation Sergey Naryshkin, who announced that he was going to visit the Russian military aviation base "Kant", as well as take part in one of the events held as part of the CSTO - a meeting of the Council of the Parliamentary Assembly.
One of the first meetings of Naryshkin and other members of the delegation took place with the "tor-aga" (speaker) of the Kyrgyz parliament Asylbek Zheelbekov, who literally crumbled in flattering statements about how far the Kyrgyz-Russian relations could be developed:

Naryshkin supported the message of the Kyrgyz colleague, noting:

We value the relations that develop between our countries. In recent years, interstate relations have been developing dynamically in all areas, in particular in the economic, humanitarian, social spheres, in the field of military-technical cooperation. Trust and friendly relations between the leaders of the two countries serve the interests of our peoples.

At the same time, Sergey Naryshkin noted the positive role of the desire of Kyrgyzstan to integrate in the Eurasian space, and even put the relations between Russia and Kyrgyzstan in this direction as an example.

If we talk about the economic plane of development of cooperation, there are, indeed, quite a few positive manifestations. The growth of trade between the two countries, as well as the growth of trade between the Republic of Kyrgyzstan and the Customs Union, is quite substantial. For example, in 2012 a year, the growth of commodity turnover in Russia and Kyrgyzstan amounted to about 25%, but only for half a year 2013 year - more than 42%. It should be noted that the growth of trade is not associated only with raw materials projects. Joint ventures make a big contribution here (these are agro-industrial enterprises, banks and construction companies, companies with joint capital, implementing energy projects - mainly hydropower). At the same time, the absolute figures of trade turnover cannot yet be called high: according to the last year’s results, it was a little over 2-s billions of dollars.

The Russian delegation expressed the hope that the growth of trade could go a more substantial pace if official Bishkek intensifies efforts to ratify the agreement on a free trade zone within the CIS. The expected increase in turnover only in 2014 year - about 60%.

For the sake of fairness, it must be said that even such a hypothetical growth in the volume of mutual trade between our countries will still not make Russia the main trading partner of Kyrgyzstan in the near future. The fact is that the place of “trading partner No. XXUMX” for Kyrgyzstan has long been staked out by China. Recently, trade relations between the Republic of Kazakhstan and the People's Republic of China have somewhat weakened, but, nevertheless, the Kyrgyz-Chinese 1 billion dollars a year is more than twofold superiority over the trade turnover of Kyrgyzstan and Russia. In order to press China out of its present place in Kyrgyzstan, Russia will have to try hard. And how successful these efforts will be, they will show, among other things, the results of the Russian-Kyrgyz contacts that are currently taking place.

A hot topic regarding Russia with the Central Asian republics (Kyrgyzstan is no exception) is the topic of migrants. According to official statistics, the number of Kyrgyz guest workers in the Russian Federation today is about 350 thousand people. According to the so-called independent statistical centers and foundations, the number of Kyrgyz migrants in Russia is over 650 thousand people (more than half are illegal immigrants). Remittances from Russia to Kyrgyzstan amount to at least 20% of the country's GDP. By the way, seeing what concessions Russia has made towards Tajik migrant workers, official Bishkek may want from Moscow similar concessions regarding Kyrgyz labor migrants. Indeed, it is often for the Central Asian leaders that the integration process mainly consists in this issue ...

Another question: whether Russia itself will draw closer economic integration with Kyrgyzstan (and Tajikistan, by the way, too)? After all, for the time being, the level of interaction between countries is approximately the following: we give you permission to stay military bases on our territories, you - we have projects, funds, migration and customs exemptions.

Perhaps, if it had not been for the withdrawal of the US military contingent from Afghanistan in 2014 announced by Barack Obama, then the conversations between Russia and the same Kirgizia would have been somewhat different. Today, the Russian authorities seem to focus on the security of the southern, as they say, underbelly, and therefore try to behave extremely compliant in dealing with Central Asian political leaders - both with Rakhmon and Atambayev. From the point of view of increasing security, such a move is fully justified, but it is necessary to take advantage of the situation also to obtain an economic return from rapprochement. True, here one must still be able to take advantage, because the Central Asian leaders will try to do everything so that economic preferences go only in one direction.

Meanwhile, Kyrgyz nationalists also prepared for the meeting of the Russian delegation. One of the local nationalist leaders Nurlan Motuev in one of his speeches suggested taking everything from Russia, and then quote:

"throw out, as in my time with the USSR. Let the Russians pay for everything ..."

By the way, the number of Russians in Kyrgyzstan over the past 25 years has more than tripled (from 22% to 7%). At the same time, the number of Kyrgyz in Russia continues to grow from year to year. Comparing the features of national policy ...