Central Asia, armed to the teeth

October 10 2013
99
Talk about arming Russia on 1,3 billion dollars in Kyrgyzstan and Tajikistan has been going on for almost a year. Recently, the supply nomenclature was finally agreed. The amount of military assistance to Kyrgyzstan - 1,1 billion dollars, Tajikistan - 0,2 billion dollars. In fact, Kyrgyzstan, which wants to become a member of the Customs Union, needs even more money: the republic wants to receive 170 million dollars for additional arrangement of borders. As for Tajikistan, he does not like gossip in Russian society on the topic of migrant workers. 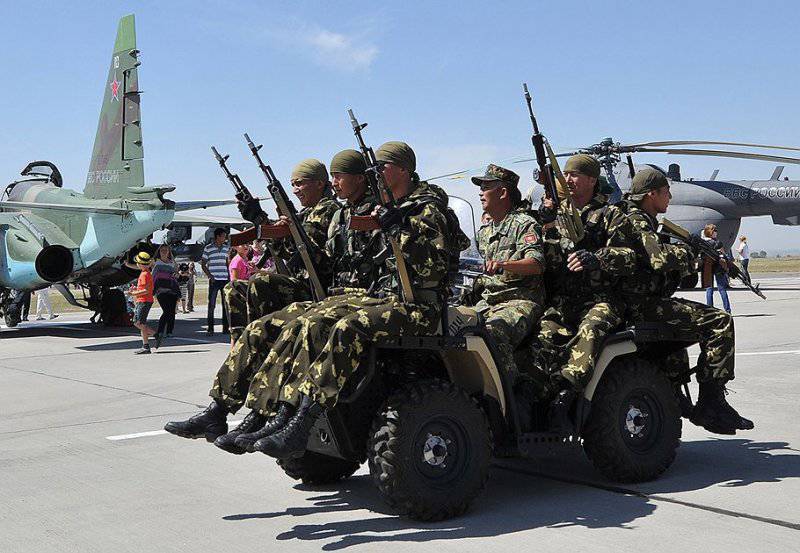 How to write Ivan Safronov, Elena Chernenko and Kabai Karabekov (Kommersant), the head of the General Staff of the Russian Federation, Valery Gerasimov, said that Russia had fully agreed with Tajikistan and Kyrgyzstan on the range of weapons that it would supply them as military technical assistance. Especially a lot will be received by the army of Kyrgyzstan: helicopters, multiple launch rocket systems, armored personnel carriers, etc. - for the sum of $ 1,1 billion.

According to the unnamed Kommersant interlocutors from the Russian side who are familiar with the negotiations, the delay is partly due to the fact that Bishkek and Dushanbe were delaying the implementation of agreements indirectly related to the military support program. Kyrgyzstan only officially issued a decision in the summer of expelling the US military from the country by closing the US Air Force Transit Center in Manas (will be valid until July 2014). And the deputies of the lower chamber of the Tajik parliament only recently ratified the agreement on the stay of the 201 Russian base in the country.

When the agreement was ratified, the head of the Ministry of Defense of Tajikistan Sherali Khairulloyev said:

According to him, the program of free training for Tajik citizens in Russian military schools can also be expanded. In addition, Russia promised to introduce preferential conditions for the stay of Tajik migrants and to cancel export duties on fuel supplies. These agreements will be finalized soon.

According to the Kommersant source in the General Staff of the Russian Federation, Kyrgyzstan will receive helicopters, armored personnel carriers and armored cars, multiple launch rocket systems 9КХNUMX Uragan, artillery, small arms, communications and reconnaissance. Moreover, the source of "Kommersant" in the Ministry of Defense of Kyrgyzstan clarified that the list is not final and there, most likely, will include property for logistic support of the army.

“Now the question is who will form the security structure in Central Asia after 2014 of the year,” PIR Center expert Vadim Kozyulin explained to Kommersant. “The US has not yet outlined its plans, but it is possible that they will want to place part of their military facilities in Tajikistan and Kyrgyzstan.” However, now, when Russia “promptly, or rather, even in fire order,” announced assistance, she, the expert believes, has managed to “seize the initiative from the United States and remain the center of gravity of the Central Asian republics, at least in the area of ​​security.”

1,3 billion dollars should be considered only the starting price for an attempt to restore Russia's influence in the post-Soviet space of Central Asia. The following amounts are already indicated.

Mukai Kadyrkulov, deputy chairman of the State Border Service of the Kyrgyz Republic, said that when Kyrgyzstan joined the Customs Union, the country would need $ 170 million for additional border management. Kyrgyzstan is going to receive this money from Russia, it reports Rosbalt.

The balance of money is as follows. He was clarified by the First Deputy Prime Minister of Kyrgyzstan Joomart Otorbayev, whose words are quoted by Tengrinews.kz:

“Joining the Customs Union obliges our country to strengthen the border with neighboring states that are not members of the organization. We do not have our own funds to strengthen the entire border. Therefore, we have requested money from Russia. $ 115 million will be needed for the arrangement of the customs infrastructure. Another $ 55 million. We will ask for border infrastructure. "

Otorbayev said that after Kyrgyzstan joined the CU, the country would have to strengthen the border with China, Tajikistan, and Uzbekistan.

The agreement between Russia and Kyrgyzstan was commented on by Sergey Naryshkin, Chairman of the State Duma of the Russian Federation. His words at the talks with Kyrgyz President Almazbek Atambayev lead "Voice of Russia" With reference to Interfax:

“We value relations between Kyrgyzstan and Russia, we positively assess how our relations have been developing in the past two or two and a half years, and a great step forward has been made in this historically short period of cooperation.”

Naryshkin also said that "during this time, several truly strategic agreements have been prepared, signed and ratified, which determine the future dynamics of our political partnership relations."

In turn, Atambayev said that he was "glad that relations between Kyrgyzstan and Russia are becoming truly full-blooded." “They are becoming as they are supposed to be between fraternal and strategic allies,” the president added.

The idea of ​​fraternity also applies to Tajikistan, which, in addition to significant military assistance, will receive, as mentioned above, benefits for the stay of migrants in Russia and the abolition of export duties on fuel.

As reported on October 7 RIA "FederalPress" with reference to ER.Ru, Tajik labor migrants will be granted the right to work in Russia for three years. This was stated by Sergey Naryshkin, speaking at the Russian-Tajik (Slavic) University. During his visit to Tajikistan, the State Duma Speaker met with the heads of both houses of the Parliament of Tajikistan and discussed the issue of migration.

Naryshkin clarified that full equality of labor rights - regardless of citizenship - is possible “only within the framework of the Eurasian Economic Union”.

As reminded by FederalPress, during the congress of the United Russia party, Vladimir Putin said that the law on migration should be tightened. The president noted that Russia has an economic need for visitors: they work there where the locals do not want to get.

In Tajikistan, they are seriously concerned that migrants are about to start being oppressed.

According to Vladimir Lisovsky (Avesta.Tj), the results of S. Naryshkin’s visit and the subsequent news reports from Moscow indicate Russia's intention to intensify diplomatic efforts to consolidate and strengthen its military presence in Tajikistan.

“The issue of transferring the Aini airfield to the 201 of the Russian military base appeared on the agenda of bilateral negotiations. In addition, a slightly forgotten question of the return of Russian border guards to the Tajik-Afghan border appeared on the horizon. The desire of Russians is understandable and understandable. But in politics, as in life, nothing happens for nothing, especially when it comes to regional security. That is why the Tajik side linked the lease conditions of the 201 base, including with the solution of the very acute problem of labor migration of its citizens to Russia. Unfortunately, the existing agreements on this topic are generally symbolic. ”

As the analyst notes, in Dushanbe they hoped that the head of the Federal Migration Service, K. Romodanovsky, would bring with him fresh ideas on how to improve the conditions of stay of Tajik migrants in Russia. But that did not happen.

“Recently, Russian media reports have been filled with loud headlines:“ Unlimited migration is a threat to Russia's national security. ” Maybe. But I would like to ask, gentlemen of politics, if the problem is posed at such an interesting angle, where have you been before, when this very threat to national security “crawled” to the approaches of the white-stone? Or a multi-million armada of Uzbek, Tajik and Kyrgyz migrants overnight landed in Moscow and other Russian cities? ”

According to the author, Russian statistics is not able to take into account migration flows. Different sources call from 6 to 16 millions of migrant workers. The author asks a clear question: how can one solve the problem of migration if its scale is not known?

And then there's the Russian nationalists. These people are ready to patrol the streets of million-plus cities. Here, the analyst adds the FMS plans to build prison-sanitary tent camps for illegal immigrants.

“Let's be honest. What kind of integration in the post-Soviet space is in principle possible if Russian President Vladimir Putin has repeatedly stated the need to tighten migration policies. In modern Russia, any tightening or restriction is a new round of corruption and nothing more ... "

Now, if we talk about the military presence of Russia in Tajikistan and the lease of the 201 th RSB, then, according to the author, the Tajik side is “quite rightly” counting on reciprocal steps, including in the area of ​​migration policy.

“Regarding the prospects of bilateral cooperation with Russia, I would like to say the following: if you want to be a partner, you are welcome, but be it to the end, and not in those areas where it’s profitable, convenient or necessary for you.”

The last, we add, is a clear exaggeration. After all, it may give the impression that it is beneficial for Russia to distribute millions and billions to the countries of Central Asia, which can simply ask for money out of habit. Perhaps Tajikistan would like Moscow to stop controlling huge flows of migrants. But some kind of a very fantastic benefit is obtained ... The issue of labor migration is painful for Tajiks precisely because they pump their GDP, including money transferred from Russia.

As for partnership, it is not based on fraternity, which has sunk into oblivion with the USSR. It is about profit, and Russia is doing a lot to ensure that this benefit is mutual. Russia seems to be doing too much in this direction. She is too generous ...

As for the analyst mentioned corruption, then in Tajikistan or Kyrgyzstan, of course, there is not and never has been.

Observed and commented on Oleg Chuvakin
- especially for topwar.ru
Ctrl Enter
Noticed oshЫbku Highlight text and press. Ctrl + Enter
We are
Artillery of the Korean People’s Army. Part of 3. Reactive systemsResults of the week. "Enter the ambassador citizen!"
Military Reviewin Yandex News
Military Reviewin Google News
99 comments
Information
Dear reader, to leave comments on the publication, you must sign in.