October 8 2013
30
In the last week of September, South Korea made a decision about non-compliance with the necessary requirements of the Boeing F-15SE multi-role fighter. Because of this decision, an issue was raised again that just recently seemed finally resolved.


South Korea is armed with 460 fighters, of which 48% are the front-line fighters F-15K and F-16, and 30% are the outdated F-4 and F-5, which need to be replaced in the coming years. If this replacement is not made, the number of fighters in the country's Air Force can be reduced by about 140 machines in 2019, when all F-4 and F-5 will be removed from service.

The Air Force needs forced Seoul on 2012 to announce a tender for 60 fighters, the first deliveries of which should have started in 2016 (later this date was shifted to 2017). It was assumed that this would be the first contract for fighters that would form the basis The country's Air Force for the period from 2020 to 2060. For this tender, South Korea was ready to allocate 7,7 billion. Initially, three applicants were considered: 1) Boeing with the F-15SE fighter; 2) Lockheed Martin with F-35A; 3) EADS with Eurofighter Typhoon. However, the last two corporations did not fit into the budget proposed by Seoul.

The third applicant also did not meet a number of technical requirements. In addition, being a European corporation EADS had less chance than the American Boeing and Lockheed Martin, because, as one Korean expert said, “it is hardly politically acceptable to purchase our next military aircraft fleet from anyone other than the United States.” Obviously, Seoul cannot help but give preferences to a country that holds troops on its territory with a population of 28,5 thousand. and an air force grouping of 90 fighters.

When in July 2013, it was announced that the contract budget would not be revised, Boeing remained the sole bidder, whose offer did not extend beyond that budget. Therefore, the corporation expected that at the extended meeting of the 24 September Committee for Defense its actual victory would be confirmed and F-15SE approved. However, the hopes of Boeing, who won the two previous tenders in South Korea, were confounded this time.

The decision of the Defense Committee to revise the budget and technical requirements of the tender was commented by the official representative of the Korean Ministry of Defense as follows: “Most of the committee members agreed to abandon F-15 and restart the project (on acquiring new fighters - PT), which should take into account North Korean threats including nuclear weapon, as well as the latest developments in the field of aerospace technology. They agreed that, in accordance with the latest trends and in order to combat the provocations of North Korea, the air force needs a fifth-generation strike fighter. ” 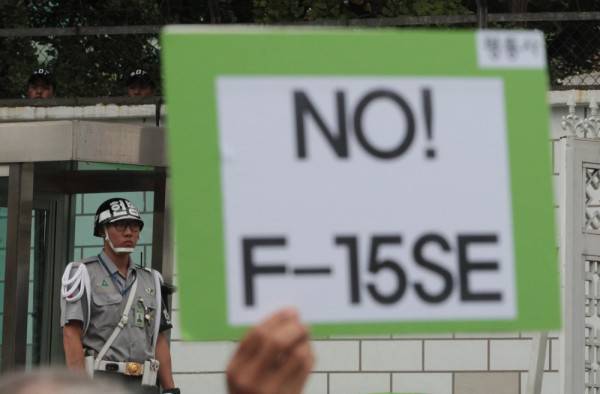 A certain influence on the outcome of the expanded meeting of the Committee on Defense was made by the appeal of former Generals of the Air Force, which was sent to government departments a month before. It argued that the country needed fighters, really built on technology Stealth, in order to "quietly penetrate North Korea and get rid of the nuclear threat from its side."

The revision of the tender opens up opportunities for Lockheed Martin and its F-35A, which is described in government documents in South Korea as a "fifth-generation fighter." In Seoul, they hope that the growth in sales of this vehicle, orders for which have already been made by Australia, Great Britain, Holland, Israel, Italy, Norway and Japan, will make it possible to somewhat reduce its cost, which is now about $ 120 million for one fighter.

An alternative option is currently under discussion, involving a batch of split planes in 60 aircraft between F-15SE (33%) and F-35A (67%). It is unlikely that this option will be implemented by Seoul, because, firstly, it will still not allow the tender budget to remain at the previously announced level, and, secondly, will force Seoul to spend part of this budget on F-15SE, based on 70-s of the last century.

According to representatives of the Korean Defense Procurement Agency, a new tender will be held within a year. Obviously, this time the favorite will be the F-35A. If Seoul decides in his favor, the contract with Lockheed Martin may imply a supply of fewer 60 machines at a later date. What prospects in the new tender are seen by the Boeing and EADS managers can be seen from the participation of these corporations in the Seoul Aerospace Exhibition, which will be held on October 29 - November 3 2013.