October 9 2013
94
of the latter, News it is known that the Kurds will send their representatives to the Geneva-2 peace conference. At least the leader of the Democratic Union Party Salih Muslim intends to go there. It is also clear that Syrian President Bashar al-Assad successfully played the Kurdish card in his country: he supports the fighters of the national Kurdish militia fighting against the Islamists, and will not mind if Iraqi Kurds join them if they need to help their brothers in Syria. Mr. Erdogan, the Turkish prime minister, was in the position of the one who was about to lose. The media write that he is balancing on the blade of a “Kurdish knife”. There is also an opinion that the Kurds, who can profitably use the war in Syria, plan to fragment all those states in which they live - that is, Iraq, Iran, Turkey, Syria and Azerbaijan. 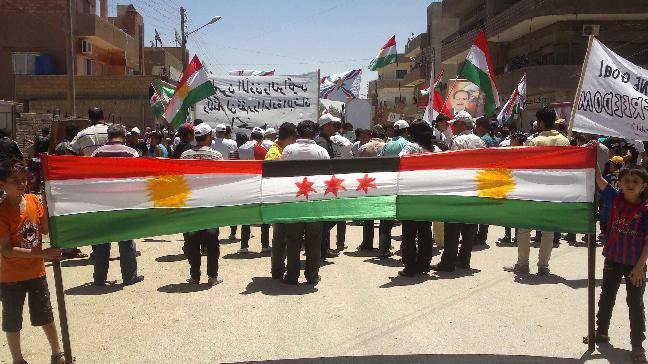 The head of the largest political structure of the Syrian Kurds - PYD ("Party of Democratic Union") Salih Muslim confirmed that the movement will take part in the "Geneva-2", reports IA "REGNUM" with reference to "Firat".

Muslim stressed that the party will go to Geneva with its proposals.

Meanwhile, in Turkey, due to the Kurdish problem, they began to build a wall on the border.

As Anna Fedyakina writes ("Russian newspaper"), the wall on the border with the Syrian city of Kameshli is erected by the Turkish military. Ankara thus expects to prevent illegal intrusions into Turkish territory. The height of the wall will be two meters, and barbed wire will be fastened on it. The length of the wall is not specified.

It is noted that in that place (the Nusaybin neighborhood) illegal border crossings rarely occur. However, clashes between Kurds, Syrian opposition militants and Arab tribes occur regularly.

Earlier, in August, Ankara announced that it would not object to the emergence of an autonomous Kurdish region in northern Syria. He writes about it "Lenta.ru" with reference to "Hurriyet".

Representatives of the Ministry of Foreign Affairs and Intelligence of Turkey held talks with Salih Muslim on August 14. The Turks designated the conditions under which they are ready to accept the appearance of the Kurdish autonomy in the neighborhood: the decision should be made by the Syrian parliament after the establishment of a democratic regime there.

At present, recalls Lenta, Ankara strongly opposes the creation within Syria of a self-governing region with a predominantly Kurdish population.

Not surprisingly, let us add from ourselves that the government of Erdogan raised the question “edge”: in fact, in this way it is possible in one fell swoop of two birds with one stone. The first hare is the fall of Assad (the establishment of a “democratic regime” implies this). The second hare is the splitting of Syria along ethnic lines; a weak and fragmented Syria would completely suit Ankara, which claims to be a regional leader.

Comrade Muslim knew the answer: he explained to Erdogan’s envoys that the Kurds in northern Syria are not going to seek autonomy or independence: after all, they “see their future only as part of Syria.” Muslim and his party are well aware of where Ankara is headed and what will remain of Syria after the creation of a “democratic regime” there, headed by radical Islamist thugs, now leading the “opposition”.

In the article Karine Tes-Sahakyan (PanARMENIAN.Net), entitled “Erdogan is balancing on the blade of the Kurdish knife, it is emphasized that it will be very difficult for Turkey to find an acceptable solution to the Kurdish problem in the run-up to the 2014 elections of the year. In the confrontation of the Arab tribes, the Kurds may be the winners, which will be the embodiment of the most terrible dream of R. T. Erdogan.

The analyst points out that the return of battles with the Kurdish Workers Party is also possible in Turkey. If the situation worsens, Erdogan will lose his chances of being elected president. In Syria, the author notes, the Kurds were the only beneficiaries of the civil war. Assad gave way to Syrian Kurds to complicate the security problems of Ankara, and today Turkey’s southern border is mainly controlled by Kurdish forces. Erdogan’s policy in the Middle East, the analyst believes, failed. Rushing to do away with Assad and relying on US President Obama, he eventually received half a million Kurdish refugees from Syria, who could later form the “fifth column”.

An article by Azerbaijani analyst Rasim Agayev, published by the Hakkin.az portal, states that the Kurds are targeting the fragmentation of Turkey, Syria, Iraq, Iran and Azerbaijan. An overview of the material is given in the resource. Panorama.am.

According to Agayev, along the entire perimeter of Greater Kurdistan, a state that is not on the political map of the world, but which is in the US political projects, the Kurdish national movement is becoming more active.

The author cites the words of the Chairman of the International Union of Kurdish Public Organizations Merab Shamoev:

"The Kurds intend to seek from the world community the status of a subject of the federation in all 4 countries of compact residence - Turkey, Iraq, Iran and Syria."

The analyst refers to experts who believe that the rebel experience has established itself in the minds of the Kurdish massif as the most effective way of implementing autonomist projects. The author concludes:

“It is not difficult to imagine where the process of disintegration of the states of the region will turn after the final autonomization of the Kurds in Turkey, which seems inevitable for many. Like a mountain stream, it will rush into Azerbaijan, where they prefer not to notice streams, the muddy waters of which have already made their way into the very heart of the republic - Baku. ”

Love Lyulko (Pravda.ru) recalls that under the Kurdish political conflict lies the economic base - the oil of the Kurdish areas and control over the oil pipelines laid from Iran, Iraq and Jordan to the Mediterranean ports.

Omar Ose, envoy of Bashar Assad, visited the capital of Iraqi Kurdistan a month ago, where he explained to the Kurds that it was right to be friends with Syria. Ose quotes Rudaw newspaper:

“The current Syrian government is much better for the Kurds than the opposition. It will be in the interests of the Kurds if Assad remains in power. ”

Oshe believes that Turkey supports terrorist groups in order to rob Kurds of a chance for self-determination.

“He (Asad) asked me to tell you (the Kurds) that we are not against you. We are friends, and we fight on the same side of the front. If Syria is destroyed, then the turn of Iran will come, and after Iran - the turn of Kurdistan. ”

He further assured the Kurds that the Syrian government would not hinder the movement of the Peshmerga in Syria, if Massoud Barzani ordered the Iraqi Kurds to go to the aid of the Syrian Kurds.

"It just needs to be done on a coordinated basis."

As for the position of Russia, then, as L. Lyulko indicates, Moscow relies on the Kurds as one of the sensible parties to the conflict in Syria. The Kremlin insists on the participation of the Kurdish delegation in the "Geneva-2".

Thus, the Syrian war has actualized the Kurdish map and has shaken the position of the Turkish Prime Minister Erdogan, who planned with the help of Washington to remove President Assad from power in Syria. However, Assad not only does not give up, but continues to oppose the Islamist mercenaries. On the geopolitical scene, the Syrian president has also managed to achieve significant success - including because Damascus is not helped by Washington, but by Moscow.

Observed and commented on Oleg Chuvakin
- especially for topwar.ru
Ctrl Enter
Noticed oshЫbku Highlight text and press. Ctrl + Enter
We are
Turkey against the Kurds. Is there a new phase of conflict ahead?Syrian Kurdistan: Will there be peace and freedom?
Military Reviewin Yandex News
Military Reviewin Google News
94 comments
Information
Dear reader, to leave comments on the publication, you must to register.