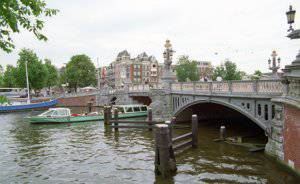 The Russian Foreign Ministry is sending a sharp note of protest to the Netherlands in connection with the attack on the Minister Counselor of the Russian Embassy in the Netherlands. This was announced today by the official representative of the Russian diplomacy Alexander Lukashevich.
“Last weekend armed men in camouflage uniforms broke into the apartment of counselor-envoy Dmitry Borodin and under an absolutely false pretext of allegedly mistreating his children in their own eyes, he was severely beaten,” the diplomat said. Borodin warned about his diplomatic status. " "It is well known that the home of a diplomat is inviolable," he recalled.
“Handcuffed Borodin was handcuffed to the police station, where he was kept almost all night,” Lukashevich said. “After that, they released him without any explanations or apologies.” “This case is not only a gross violation of the norms and rules of international communication, but also of the provisions of the Vienna Convention on Diplomatic Relations,” said the official representative of the Russian Foreign Ministry. “The Russian embassy in The Hague is currently dealing with the circumstances of this unlawful act.”

Ctrl Enter
Noticed oshЫbku Highlight text and press. Ctrl + Enter
We are
Picket at the American Embassy in KievIn the Netherlands, the ship Karel Doorman was commissioned
60 comments
Information
Dear reader, to leave comments on the publication, you must to register.