October 8 2013
192
At the recent Russian Arms Expo-2013 exhibition, several new developments of the domestic defense industry were shown. Among other things, for the first time demonstrated a new model of support combat vehicle tanks BMPT-72 "Terminator-2". In this project, the designers of the Uralvagonzavod enterprise took into account the experience gained in testing the previous car of this class, which allowed us to correctly update the design, composition of weapons and equipment. At the same time, some measures were taken that could lead to great commercial success of the new combat vehicle. 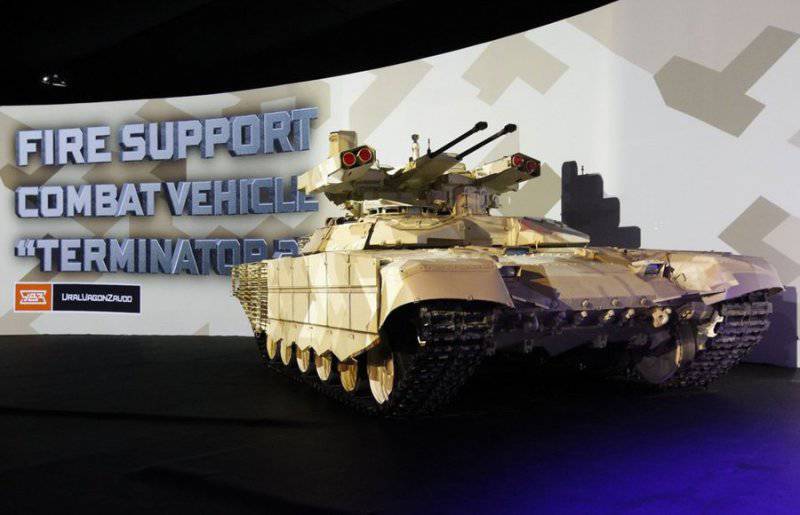 The main difference of the BMPT-72 car from its predecessor is the base chassis. In the early stages of the project, it was supposed to build the previous BMPT vehicle based on the chassis of the T-72 tanks, but later on a modified T-90 tank chassis was taken as the basis for it. The new version of the tank support combat vehicle is based on the hull and undercarriage of the T-72 tank. As expected, this feature of the project will help promote new machines in the international market. T-72 tanks are operated in dozens of states and each of them may show interest in the new Russian BMPT-72.

According to official data, built or converted from the tank "Terminator-2" has a combat mass of 44 tons. When using an 840 or 1000 engine horsepower (depending on the modification of the base tank), the BMPT-72 is able to accelerate on the highway to 60 km / h and travel along an off-road route at speeds up to 35-45 km / h Cruising range for fuel - 700 kilometers. Characteristics of mobility allow the new BMPT to move and fight in the same ranks with all modern main tanks of Russian production. In addition, the use of the chassis of the T-72 tank greatly simplifies and simplifies the maintenance and supply of spare parts.

The BMPT-72 is heavier than the base tank due to the installation of the original turret with weapons and additional protection modules. Frontal and side hulls are additionally covered with dynamic protection system modules. It is proposed to protect the engine compartment in addition with cumulative grids. In addition, to counter the anti-tank weapons using opto-electronic systems, the BMPT-72 has smoke grenade launchers. 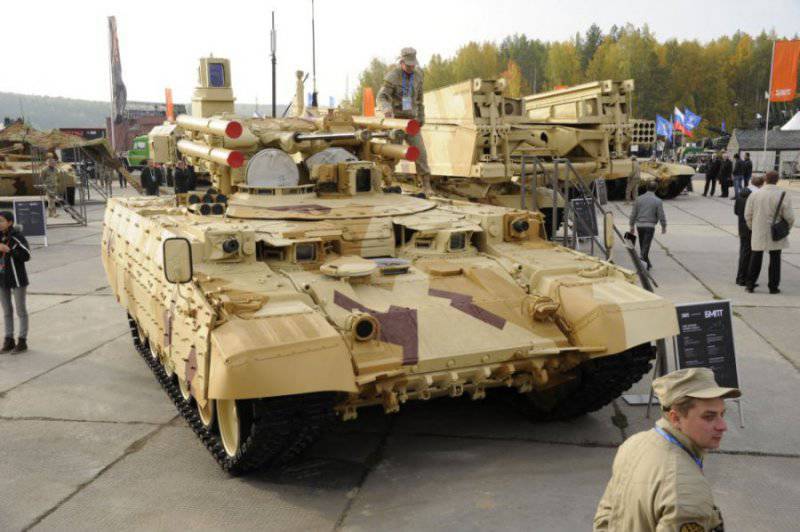 In order to simplify the production or re-equipment of finished machines, the new Terminator-2 has several noticeable differences from the previous model BMPTs. Thus, the crew was reduced to three people: only the driver, commander and gunner-operator of weapons remained in its structure. Two grenade throwers, as well as their weapon, removed. Obviously, this change in the composition of the crew and the armament complex made it possible to simplify the work on retrofitting the finished tank chassis due to the absence of the need for a serious change in the front of the hull. In addition, the withdrawal from the crew of the grenade throwers made it possible to reduce the number of people in the car to the “tank” level. In other words, the crew of the T-72 tank and BMPT at its base consists of three people. In the future this may contribute to facilitating crew retraining.

All the weapons of the updated tank support combat vehicle are mounted on the turret. The unit itself, in turn, is mounted on a standard chase of the T-72 tank without any modifications of the hull. The complex of tower armament and equipment of the BMPT-72 machine is similar to the corresponding equipment of the Terminator machine. At the same time, some technical solutions were used to increase the combat capability and survivability of both the machine as a whole and individual systems. First of all, noticeably developed bulletproof booking of almost all units located on the tower. Two 30-mm automatic guns 2А42 are partially covered with an armored casing. In BMPT-72 ammunition packs, it fits up to 850 projectiles for both guns. For shooting 2А42 cannons, all available 30 caliber millimeters of the Russian standard are suitable. Shooting is conducted in two modes: with a great pace at the level of 550 shots per minute and with a small, no more than 250-300 shots per minute. Above the guns in its own housing is placed a PKTM machine gun with 2100 ammunition ammunition. 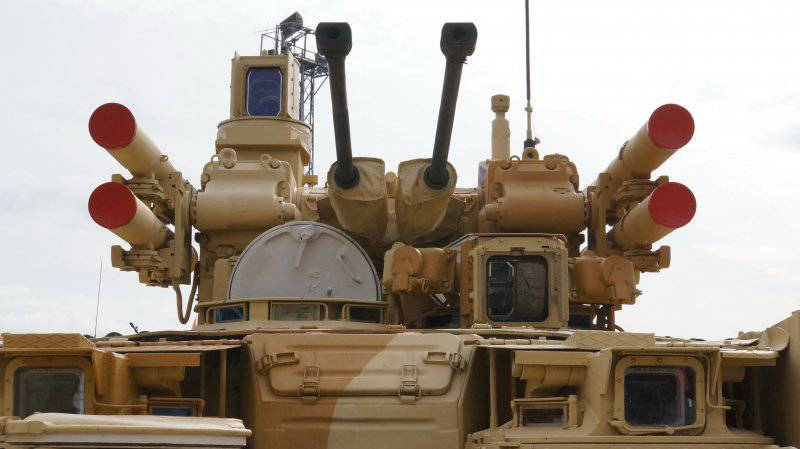 The authors of the BMPT-72 project solved the problem of the protection of guided weapons, which caused a lot of complaints about the vehicle supporting tanks of the first model. On the sides of the Terminator-2 tower there are two armored housings inside which are mounted transport and launch containers with 9М120-1 or 9М120-1Ф / 4 guided missiles. Missiles are capable of hitting armored targets at a distance of 6 kilometers. To control the missiles, a complex of means B07C1 is used.

The updated BMPT-72 machine fire control system includes gunner's and commander’s sights, laser rangefinders, ballistic computer and weapon stabilizer. The commander of the machine has a combined panoramic sight with television and thermal channels. Field of sight sight stabilized in two planes. The commander’s sight is also equipped with a laser range finder. The gunner machine uses a sight with optical and thermal imaging channels. This sighting device has a field of view stabilized in two planes, and is also equipped with a laser range finder and a laser control system for anti-tank missiles.

Used aiming equipment when using a television channel allows the commander of a combat vehicle to recognize enemy tanks at a distance of about 5 kilometers. At night, when using a thermal imaging system, the recognition range is reduced to 3,5 km. The target and thermal channels of the gunner's sight provide detection and recognition of the target at approximately the same distances - 5 and 3,5 km, respectively. 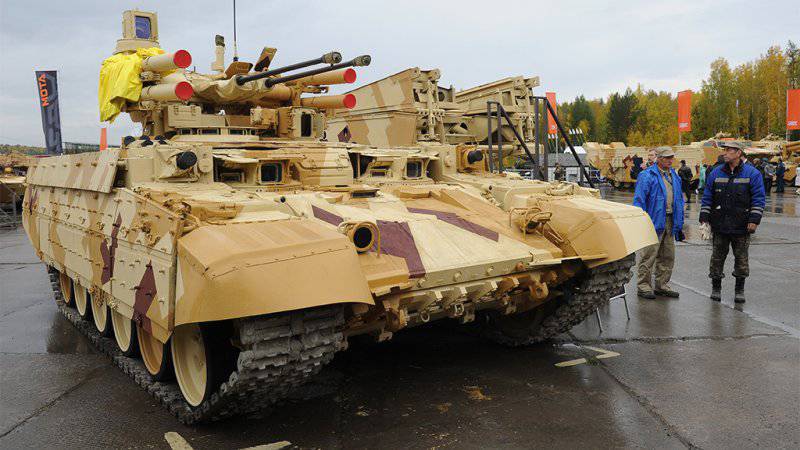 Shortly after the first show of BMPT-72 “Terminator-2”, several defense industry officials made statements about its prospects. All of them believe that the updated tank support combat vehicle should interest potential customers. One of the main advantages capable of attracting interest from the Russian or any foreign army is considered to be the base machine. T-72 tanks are operated in many countries, because of which the conversion of outdated equipment of this type into new BMPT-72 can have a beneficial effect on the capabilities of the customer’s ground forces.

An interesting feature of the BMPT-72 project is the fact that it was originally created taking into account not only the construction of new machines, but also the re-equipment of existing equipment. According to official information, the Russian enterprise Uralvagonzavod can supply the customer with ready-made tank support machines or transfer sets of equipment for retrofitting existing tanks by the customer.

The level of protection and firepower of the new infantry fighting vehicle in comparison with the original "Terminator" remained at about the same level. Probably, the refusal of automatic grenade launchers can badly affect the fighting qualities. However, this decision was made in connection with the simplification of the design and production. Probably the absence of two grenade launchers will not be able to push away potential customers. It is worth recalling that in numerous discussions of the BMPT machine, doubts were often expressed as to the advisability of installing two automatic grenade launchers, which should be controlled by individual crew members. The claims of specialists and people interested in military equipment concerned both the quantitative aspects of the crew and the combat effectiveness of grenade launchers with limited pick-up angles. 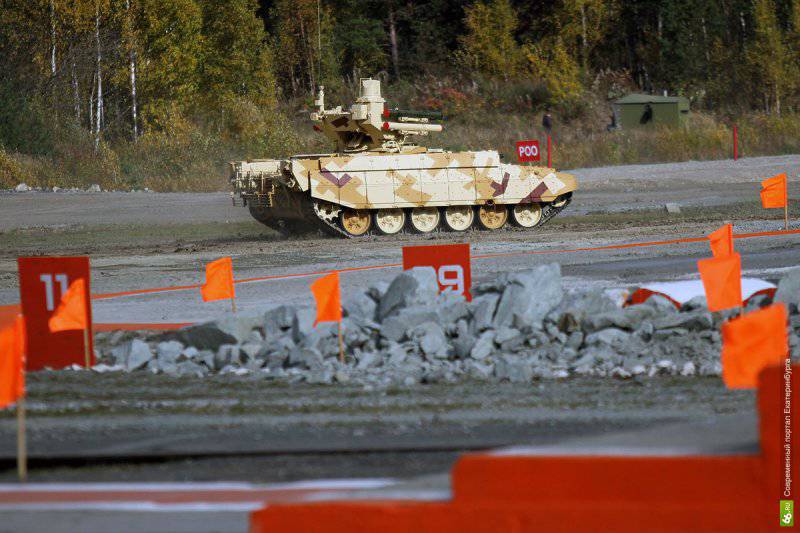 The firing capabilities of the barrel and guided weapons of the BMPT-72 roughly correspond to these parameters of the first Terminator. This can be explained by the fact that when creating a new tank support machine, the project authors sought to unify it with the T-72 tank, and also to remove the main drawbacks of the previous design. As a result, it became possible to relatively simply convert a tank into a tank support vehicle with sufficiently high performance.

While potential customers did not talk about their intentions to buy new cars BMPT-72 or make them from existing tanks. The first demonstration of the new combat vehicle took place a few weeks ago and therefore it is too early to talk about possible purchases. Possible operators of this technology only recently got the opportunity to get acquainted with the new proposal of the Russian defense industry. Reports of contract negotiations may begin in the coming months.