Financial and banking sanctions: the sword of Damocles over Russia 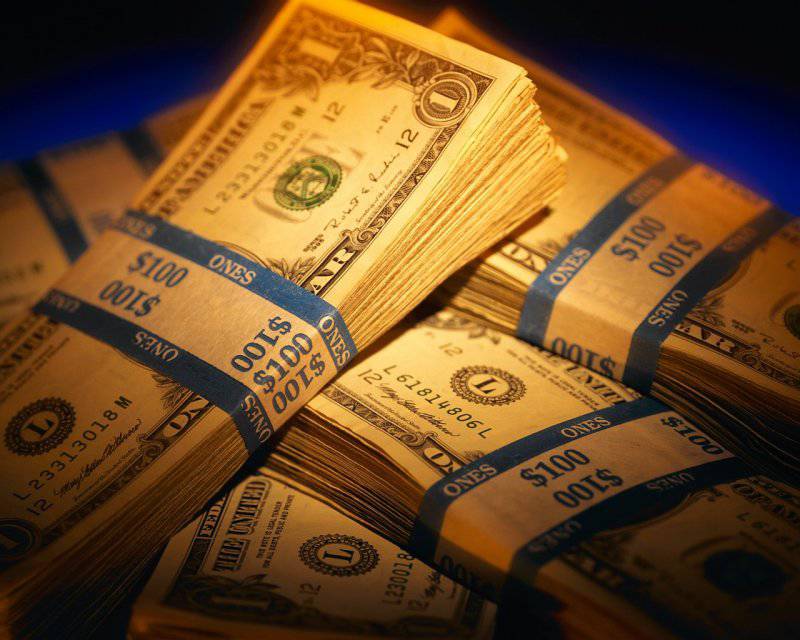 For many decades, the West has been waging an economic war against Russia / USSR. A serious signal for the Russian authorities was the recent letter from four US senators addressed to the head of the US Treasury Department, Jacob Lew. The senators called on the US administration to impose sanctions on the largest Russian banks, which, according to them, help finance the activities of the Syrian authorities. In essence, this letter is a direct call for confrontation at the state level, the official declaration by the United States of an economic war against the Russian Federation.

Trade, economic, financial and banking sanctions by the West against Russia have become the norm since the end of 1917. This was a reaction to the decision of the Bolsheviks to cancel the external debts of the tsarist government and to nationalize enterprises owned by foreign capital. At that time, foreign currency accounts of the State Bank and the Ministry of Finance of the Russian Empire were frozen in Western banks. Russian gold was also frozen, which was placed in banks in the UK and some other countries. European banks were prohibited from making settlements on export-import operations of Soviet Russia. Therefore, the Bolsheviks widely used dummy firms of bordering countries (especially Baltic), as well as some banks, formally foreign (Swedish, Estonian, American), but controlled by people who worked in the interests of Moscow. For calculations in foreign trade, the Soviet government made extensive use of gold, which reduced the effectiveness of the economic blockade of the West. In 1929, the former Entente countries tried to strangle Soviet Russia by imposing a ban on Western banks and gold companies accepting it. This sanction was called the "golden blockade". The effectiveness of trade, credit and "gold" blockades was low. This is evidenced by the fact that the USSR managed to build 1929 enterprises from 8600 until the beginning of World War II, most of which were based on imported equipment.

In the postwar years, the West, under the auspices of Washington, also organized various blockades of the USSR more than once. For example, in 1980-1982. At that time, a very large “gas-pipe” deal was carried out, which provided for the supply by Western (mainly Western European companies) pipes and compressors for the construction of an export gas pipeline in the USSR to the western borders of the Soviet Union. Under the pretext that Soviet troops invaded Afghanistan, Washington tried to impose bans on these supplies, attempts were made to block settlements on them through Western banks. Despite all this, the gas pipeline project was successfully implemented.

After 1991, the West several times came out with threats of imposing sanctions against the Russian Federation, although the case did not reach practice. In August, 1998, when Russia was not able to pay debts to foreign creditors, the question of the possible arrest of foreign accounts of the Bank of Russia was discussed in the West. In August, at the EU summit in Brussels, 2008 faced the issue of imposing trade-economic and financial-banking sanctions against Russia due to the fact that Russian troops thwarted Georgia’s attack on South Ossetia.

We can also recall the “spy scandal”, when Moscow refused to surrender Edward Snowden to Washington. Then, talks about the need for sanctions against the Russian Federation began at the White House and in the US Congress. The already prepared “package of sanctions” was mentioned, the content of which was not disclosed.

It cannot be said that everything is limited only to threats against Russian banks and their clients. There were specific actions. It is primarily about the so-called soft sanctions. They are carried out under the banner of the fight against the financing of terrorism, the laundering of "dirty" money, organized international crime, corruption, etc. It was under this pretext that the US authorities in the middle of the past decade closed down several hundred American correspondent accounts of Russian banks that were “suspected” of illegal operations. Russian banks, of course, managed to find a way out (opening a correspondent account with banks in other countries), but “soft sanctions” made their lives more difficult, because the dollar settlement rate has decreased, while the costs have increased (commissions for intermediary "services").

There were also attempts of “raids” by the US on Russian banks, allegedly in connection with violations by the latter of sanctions against individual countries. The most striking example is an organization called “World Business Bank”, which is a Russian credit institution. This is the “daughter” of the largest state-owned bank of Iran Bank Melli. It was opened in 2002 year under the name Bank Melli Iran CJSC. Since 2010, it has been called World Business Bank. In 2012, by the size of its assets, the World entered the first hundred of Russian banks. Provides a letter of credit service to the Russian-Iranian trade in wheat and commodities. The American authorities have repeatedly recommended that Russian banks refrain from interacting with both Bank Melli and its Russian subsidiary. The Russian Foreign Ministry had to clarify to journalists about the problems with Mir: “The bank’s activities do not contradict either the domestic legislation of Russia or its international obligations under the relevant UN Security Council resolutions on sanctions against Iran.” Bank Melli is mentioned in the UN Security Council resolution of 2008. It says about the possible involvement of the bank in financing the nuclear program, but did not impose any sanctions on the bank and its branches. Washington does not prohibit trade with Iran raw materials that can not be used for military and energy purposes. Nevertheless, according to Russian media reports, the “daughter” of the Iranian bank lost 17,6 billion rubles in sanctions. (News, 16.08.13).

It is probably in connection with the Mir Bank that Foreign Minister Sergey Lavrov 7 of September 2012 of the year after talks with US Secretary of State Hillary Clinton told reporters: “Unilateral American sanctions against Syria and Iran are increasingly acquiring an extraterritorial nature, affecting directly the interests of Russian business, in particular banks. "

The magnitude of the threat

The letter of US senators was commented on by many Russian experts. Perhaps the only one who rated the senators' letter as a serious warning was the former deputy chairman of the Accounts Chamber of the Russian Federation, Yuri Boldyrev. He drew attention to the fact that it was proposed to arrange sanctions against not just Russian commercial banks, but against state banks. The freezing of foreign assets of state credit institutions can be a step, followed by a much more serious step - the freezing or arresting of international reserves of the Bank of Russia.

Foreign assets of the banking sector of the Russian Federation without securities (on 01.01.2013)

Distribution of foreign assets of the banking sector of the Russian Federation by countries (01.01.2013) * 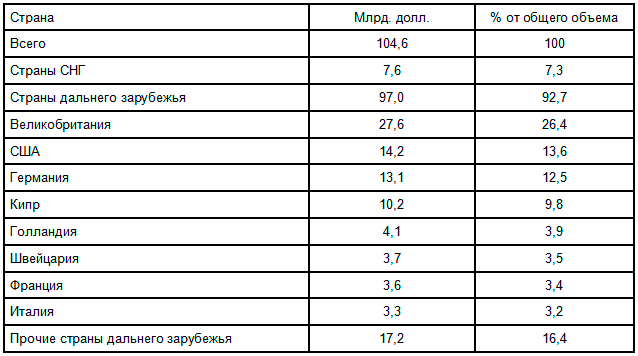 * The most liquid part of foreign assets, consisting of loans, deposits, correspondent accounts, cash foreign currency in the cash offices of credit institutions

After the letter of four American senators in the air there was a smell of large-scale economic war. In such conditions, urgent measures to protect the Russian economy from the threat of financial and banking sanctions from the West are necessary. A lot of useful experience in this regard can be drawn from the history of the Russian Empire. So, literally one month before the First World War, the State Bank and the Ministry of Finance of Russia withdrew currency from German and Austrian banks and transferred them either to Russia or to the banks of the Entente countries.

Similarly, it is necessary to do with the international reserves of the Russian Federation, most of which are placed in the debt securities of the US government and other Western countries, as well as in the accounts of Western banks. Part of foreign exchange reserves can and should be directed to cover such expenses as payments on government debt (all debt obligations should be repaid, if possible, ahead of schedule). Part of international reserves (especially the part that falls on the Reserve Fund and the National Wealth Fund) should be used to purchase assets of the real economy in countries friendly to Russia, and to use part to buy machinery and equipment and implement strategic investment projects. Here it is possible and necessary to use the invaluable experience of the first Soviet five-year plans, when, under the blockade of the West, it was possible to purchase machinery and equipment for the industrialization of the country. And, of course, whenever possible, convert the currency part of international reserves into gold, which should be equated to strategic resources. As is known, the "yellow metal" has "immunity" against the most severe sanctions.

Another important area is the creation of systems of international payments and settlements that are protected from sanctions, alternative to the current systems, which are based on the use of correspondent accounts in American and European banks ... This suggests a project to create such protected systems within the framework of BRICS and in the framework of Eurasian integration projects. This option implies the refusal of settlements in the current reserve currencies - the euro and the dollar.

If necessary, develop economic relations with Western countries or countries under Western control, it is advisable to more widely use the so-called currency saving schemes. This barter, compensation transactions, clearing calculations. By the way, during the times of the Soviet Union such schemes were actively used, there is a rich experience that is deliberately ignored. One should also recall the experience of the functioning of sovzagrank banks, which formally were not Soviet, but foreign, but acted in the interests of the USSR (Moscow People’s Bank in London, Yurobank in Paris and others). They helped bypass the sanctions and blockades that were periodically organized by the West.

Deoffshorization of the Russian economy is also an important condition for increasing its immunity with respect to Western sanctions. This is a very broad topic that requires separate discussion. We only note that a substantial part of the foreign assets of Russian banks are located in offshore jurisdictions - in the form of shares and shares of offshore companies, on deposit and other accounts of offshore banks. Western intelligence services have access to information about these assets, so hope that they will be protected from Western sanctions should not be.

Ctrl Enter
Noticed oshЫbku Highlight text and press. Ctrl + Enter
We are
Way out of chaosList of destroyed the largest and most high-tech enterprises
Military Reviewin Yandex News
Military Reviewin Google News
57 comments
Information
Dear reader, to leave comments on the publication, you must to register.