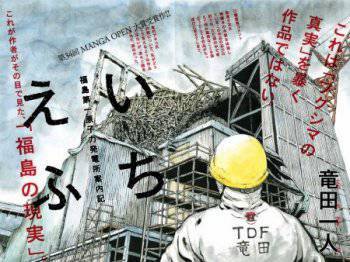 Frightening come from japan news: then information will be received about hundreds of thousands of tons of radioactive water, it will become clear that the water pumps have failed at the nuclear power plant, the hard workers will shed radioactive water under their feet, then, finally, an angry voice will be heard from the Japanese Nuclear Regulatory Agency. And recently, an assistant of a senator revealed through the Internet that many Japanese have bleeding from the nose. Flows and does not stop ...


As the correspondent of 4 reported October RIA News" Ksenia Naka, the ALPS radioactive water purification system at the Fukushima-1 NPP resumed operation after the shutdown. This was reported by the operator - the company "TERCO" (Tokyo Electric Power Co.). The reason for the next stop were violations in the installation of the system, and not a technical failure.

Through the use of ALPS, experts expect to solve the problem of accumulated polluted water. But troubles again bother: the ALPS began to be tried back in March, but the equipment was stopped due to technical problems. The Japanese are stuck at the testing stage.

The ALPS system can purify water from 62 types of radionuclides, with the exception of tritium, and the operating equipment only purifies water from cesium. On the day, “ALPS” cleans up to 500 tons of water.

This number does not seem large if you go back to those 440 thousands of tons that accumulated "Fukushima-1". TERSO plans to completely clear the water accumulated in the underground rooms of the power units, the technical tunnel of the station and tanks from radiation only by the end of March 2015.

Regarding the situation at nuclear power plants, the head of the agency that regulates the work of the nuclear industry in Japan spoke earlier. He sharply criticized the management of the operating company, "Euronews".

The Secretary General of the Nuclear Regulatory Agency of Japan publicly reprimanded the head of TERSO, Naomi Hirose:

“The problem of“ TEPCO ”today is that after the incident at the Fukushima nuclear power plant, the operating company did not take basic safety precautions. How the management of TEPCO resolves this situation is extremely dissatisfying. ”

Two days later, there was information about a power failure at a nuclear power plant. As transmits RBC, water pumps suffered from failure.

Pumps in the reactor cooling system suffered as a result of a power failure in October 6, TERSO reported. According to Reuters, the reserve capacity was immediately put into operation.

On the same day, Japanese Prime Minister Shinzo Abe delivered a speech. Speaking at an international scientific forum in Kyoto, he said that Japan is ready to accept foreign assistance to stop the leakage of radioactive water, reports RBC with reference to the Associated Press.

Andrey Reznichenko, the head of the editorial board of science, ecology and technology, outlined his vision of a series of problems at Fukushima, primarily related to the leakage of highly radioactive water. RIA News".

After a recent leak, measurements in the area of ​​tanks showed strontium content in the 200 concentration of thousands of Becquerels per liter at the statutory standard of 30 Becquerels per liter. The scientists named 200 thousand Bq for strontium are declared mid-level radioactive waste.

The neighbors of Japan have nothing to fear, the expert believes. Water ingress may even improve the situation. Ocean analyst calls the "great solvent."

But the question is: why is Fukushima constantly reeling? The answer is definitely not, because it is still not clear exactly what is happening with molten reactors. Andrei Reznichenko advises adding “skilled hands” on Fukushima by seeking international assistance. And to approach this should be very serious. First of all, you need to ask for help from Russia: it has a unique experience in analyzing, predicting and eliminating the consequences of accidents at nuclear facilities.

As for tritium, it could be dropped into the ocean. The idea of ​​discharging tritium accumulated in water into the ocean does not contain anything new, the expert points out. Similar plums are practiced in Canada and the UK. Such a discharge should be carried out under the control of the international community. True, Reznichenko believes that because of the “tantrum” around Fukushima, the Japanese will not go to such discharges.

Another solution to problems is to switch to another type of cooling of reactors and cooling pools (by air).

While the Japanese are late in asking for international assistance, information about massive bleeding has penetrated into the press.

According to Andrei Kamenetsky ("But"), Takahiro Katsumi — Senator Tadashi Inuzuku’s international affairs assistant — raised a wave of panic. He sat on Twitter and made a discovery:

Katsumi began to collect feedback on Facebook, and immediately people of different ages began to turn to him. Parents wrote for young children. All complained about the blood from the nose. The most problematic was the Kanto region. Light bleeding is noted in Hokkaido and Osaka-Kyoto-Kobe region.

“Nosebleeds in themselves are not entirely characteristic of radiation sickness. It usually arises as a side factor in severe damage to the body when there are more severe symptoms. However, there is a nuance. The hematopoietic syndrome of radiation sickness is characterized by a drop in the number of blood cells and the occurrence of aplastic anemia. A person loses immunity along with white blood cells, feels fatigued as with anemia due to the loss of red blood cells ... and begins to bleed freely without platelets. The majority of Katsumi respondents complained about anemia. ”

A. Kamenetsky reminds that 16 June 2011 was published by Tokyo Shimbun newspaper about many children from Koriyama (Fukushima Prefecture), who had suffered from nausea, anemia and nonstop nasal bleeding for several days in a row.

The same Katsumi conveyed an unconfirmed report that the 120-meter exhaust pipe on Fukushima-1 collapsed after a recent earthquake. As if a huge radioactive cloud of dust had risen, then spreading across the country.

And here Arnold Gundersen, the leading engineer of Fairewinds Associates, spoke out. This consulting firm works in the field of nuclear energy. According to Gundersen, Japanese doctors repeatedly applied to Fairewinds, claiming that they had patients with radiation sickness. The fact is that the authorities forbid reporting to the patients themselves. According to Gundersen’s estimates, there is a risk of radiation release comparable to 15.000 Hiroshima due to new leaks of radioactive water and impending tropical storms.

As Mary Saito points out (NBC News - “Reuters”), while radiation continues to leak into the Pacific, the Japanese government plans to spend half a billion dollars to contain the disaster.

Martin Fackler ("The New York Times") cites the “TEPCO” message that the water pump used to cool one of the reactors may have stopped due to a human error. A statement of a fault in the electrical panel did not sound.

Where did it come from?

It turns out that its source is a release for a government regulator. The “alternative” explanation is that the worker could accidentally turn off the main pump by pressing the stop button during a routine check.

In any case, the journalist writes, this refusal is the last straw that has overflowed the cup of patience. The public no longer believes in the promises of TEPCO to purify water.

Last week, the author adds, it was reported that workers simply spilled 114 liters of radioactive water, mistakenly trying to pour water into a tank already filled with water ...

Thus, let us add on our own, the Japanese, with their mentality, who tells everyone to keep quiet and lie for the sake of the same silence, are unlikely to cope with the nuclear problem without international assistance. After the speech of Shinzo Abe at the scientific forum, decisions should be expected in this very direction.

Observed and translated by Oleg Chuvakin
- especially for topwar.ru
Ctrl Enter
Noticed oshЫbku Highlight text and press. Ctrl + Enter
We are
Results of the week. "Enter the ambassador citizen!"The cause of the accident at "Fukushima" recognized the human factor
Military Reviewin Yandex News
Military Reviewin Google News
133 comments
Information
Dear reader, to leave comments on the publication, you must to register.