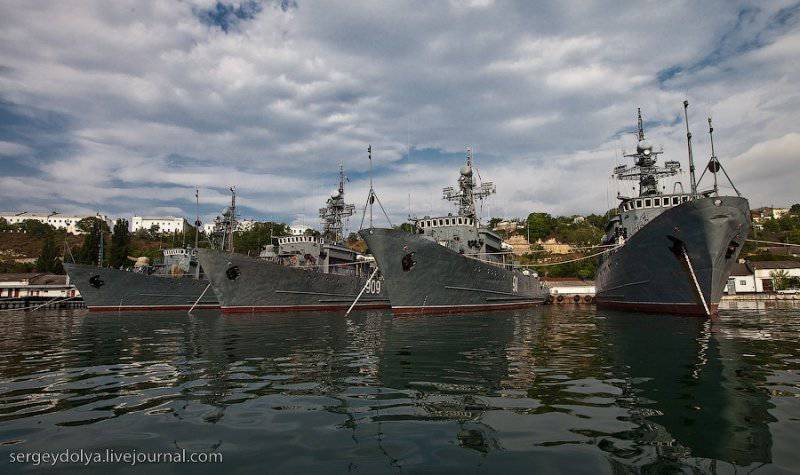 Moscow decides in its own way the issues of modernization of the Black Sea fleetnot paying attention to the position of Kiev and violating the basic Ukrainian-Russian agreements on the naval base, including the principle of "type on type, class on class."


Thus, in mid-February, the Azov landing ship, in violation of laws and procedures, brought the BTR-2013AM from Novorossiysk to Sevastopol, the latest modification of the BTR-82 armored base carrier for the Russian Armed Forces. In Ukraine, the new vehicle spent about a week aboard the landing ship and only 80 February, a few hours before visiting the Marines military town in Cossack Bay, the new Russian Defense Minister Sergei Shoigu, was taken to the location of the Black Sea Fleet 20 brigade.

At the official level, the command of the Russian Black Sea Fleet admitted the illegal import of armored vehicles into the territory of Ukraine only in April. Through the naval press service, it was stated that "the new BTR-82AM armored personnel carrier, which is to replace the BTR-80, which is in service with the Russian army, is being tested at the Marine Corps in Sevastopol", and that "the main difference between the new model BTR- 82AM from its predecessor is an automatic artillery installation caliber 30-mm, greatly enhancing the firepower of the machine. "

According to ZN.UA, the plans of the Russian military in the coming years include the receipt of this particular type of military equipment for the armament of the marine unit of the Russian Black Sea Fleet based in Ukraine.

Another example of violation of bilateral agreements on the Black Sea Fleet was the illegal entry into Ukraine of a new vessel of the Black Sea Fleet. At the end of April, a new-generation raid tug RB-389 came from Novorossiysk to Sevastopol. Officially declared purpose of arrival - for repairs.

However, having stood for a short time at the berth, the new equipment of the auxiliary fleet of the Black Sea Fleet set to work, being actively involved in towing Russian warships and ships in the water area of ​​Sevastopol. Already, 7 in May of the RB-389 was involved in the re-mooring of the ship's personnel to the parade in preparation for the celebration of the 230 anniversary of the founding of the Black Sea Fleet.

On September 11, Moscow tried, without any permission for that, to pass unnoticed through the sea gates of Ukraine another convoy of Black Sea Fleet vessels. On this day, the rescue tug Shakhtar hurried to tow two more auxiliary vessels of the Black Sea Fleet in tow to the Sevastopol naval base - the rescue tug SB-4 and the diving vessel VM-86. Both towed vessels are attributed to Novorossiysk.

Kiev was indignant and demanded that the illegal caravan leave the Ukrainian territorial waters and wait for the outcome of the situation outside the maritime borders of Ukraine. Only after the agreement of the problem issue by the foreign affairs agencies of the two countries, September 14, the rescue tug SB-4 and the VM-86 diving vessel, already legally, went to Sevastopol for repairs. But after stories with the tugboat RB-389, it is possible that the SB-4 and BM-86 will remain on permanent residence in the bays of Sevastopol.

21 April 2010, the Presidents of Ukraine and Russia Yanukovich and Dmitry Medvedev signed an agreement to extend the stay of the Russian Black Sea Fleet in Ukraine to 2042 and link the rent for it to the price of Russian gas supplied to Ukraine. 27 April 2010 was pleased to ratify this agreement.