Open letter of veterans of UKBTM to President Vladimir Putin

October 7 2013
63
OPEN LETTER TO THE PRESIDENT OF THE RUSSIAN FEDERATION V.V. PUTIN


Dear Vladimir Vladimirovich!
More than 20 years have passed since the adoption of the main military tank T-90 With the advent of this tank and, especially, its export modification of the T-90S, during the troubled and difficult years of the mass death of the defense industry enterprises, it was possible to save the tank design bureau in Nizhny Tagil and the only tank production plant, and, consequently, the entire tank industry of Russia. 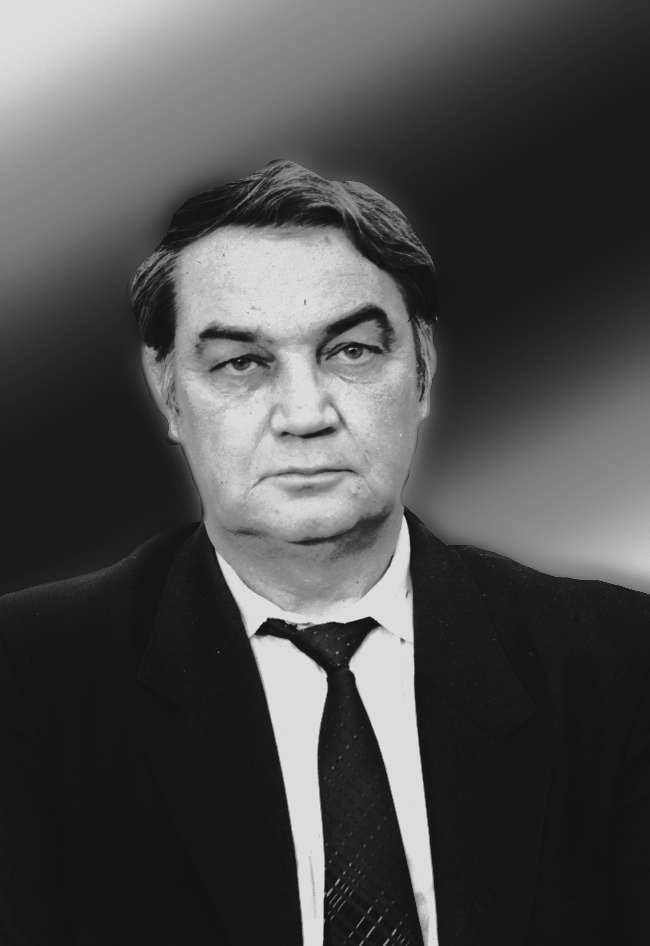 The main merit in this belongs to the talented designer and outstanding leader of the Orders of Lenin and the October Revolution of the Ural Design Bureau of Transport Engineering (UKBTM, Nizhny Tagil, Sverdlovsk Region), colonel-engineer Vladimir Ivanovich Potkin. This year he would have turned 75 since his birth. He not only organized with the support of the General Director of the production association "Uralvagonzavod" Malykh N.A. (1997-2003) and Head of the Main Automobile and Armored Directorate of the Ministry of Defense, Honorary Citizen of Nizhny Tagil, Colonel-General S.A. (1996-2006) in the shortest possible time the development of design documentation for the export version of the T-90C, but also recreated the entire chain of cooperation anew, persuading some suppliers to revive production again.
In addition, Potkin laid the foundation for the creation of new promising Russian combat vehicles and other complex equipment.

13 May 1999, Vladimir Ivanovich, refusing to go to the hospital, died in his workplace from a second heart attack, after the hardest preparation for extreme tests of T-90С tanks in India on the eve of their departure to the airport.
After that, a number of lucrative contracts for the supply of T-90С tanks were concluded abroad. To date, the T-90С tank is the most popular main tank on the international arms market, bringing substantial profits to the state.

Taking into account the exceptional contribution of the chief designer of OAO "Ural Transport Engineering Bureau" V. Potkina In the development of domestic tank production, its outstanding achievements in the creation of samples of armored, engineering, road-building equipment, which did not receive a decent assessment at the state level, the veterans of UKBTM OJSC put forward a proposal to award Vladimir Ivanovich Potkin with the title “Hero of the Russian Federation”, or as an option, “Hero of Labor of the Russian Federation” (posthumously).

The motivation of our proposals was recognized as convincing and supported by the staff of the Presidential Envoy to the Ural Federal District. Consultations of employees with specialists of the Commission under the President of the Russian Federation on state awards (hereinafter referred to as the "Commission") were held.
The experts of the Commission pointed out a number of requirements for awarding the highest awards that prevent the appropriation of Potkin V.I. the title of "Hero of Russia" or "Hero of Labor" (posthumously). Their essence is as follows:
1. Merits Potkina V.I. for the creation of the T-90 tank (T-90C) were awarded his Order "For Services to the Fatherland" III degree (posthumously) by the Decree of the President of the Russian Federation No. 796 from 18.06.99.
Twice state awards for the same merit are not assigned.

Thus, the top leaders of countries in justified cases do not take into account various restrictions in conferring the highest awards for outstanding services and exploits to their citizens.
In this case, in our opinion, for assignment to Potkin VI the highest rank of the country, the President of Russia does not even need to look for any exceptions to the order of award that has developed at the state level.
Vladimir Ivanovich Potkin was awarded the Order of Merit for the Fatherland, III degree, only for his specific services to lead the work on the creation of the T-90 (T-90С) tank of the 1999 model of the year and they are a priori worthily evaluated. (Like the chief designer MI Koshkin, Vladimir Ivanovich did not live to see the triumph of his “brainchild”).

A few days after the tragic death of Potkin, tests of X-NUMX’s T-XNUM-X tanks began in the most difficult climatic conditions of the Indian Tar desert, which resulted in the first lucrative Russian contract for supplying India with a large batch of these tanks. From that moment, Uralvagonzavod, dying from lack of money, and even more than two hundred enterprises - suppliers of components and components of the tank, began to rise "from its knees". The tank industry of Russia was saved!

But this does not exhaust the merits of Potkin to the country!
Despite the massive collapse of industrial enterprises and the degradation of scientific centers in the "dashing" 90-s, at UKBTM, under the leadership of Potkin, an unprecedented pace at that time carried out technical re-equipment of the enterprise, launched a unique integrated stand that allows you to remove the load characteristics of the tank at extremely high temperatures ambient air, 100-percent computerization was carried out at all engineering and engineering workplaces and auxiliary services, a huge technical reserve was created ytnye models of tanks, engineering and special complex machines.
Among them:
- Fighting vehicle fire support - BMPT ("Terminator"), which has no analogues in its combat characteristics in the world tank building;
- "Objects 187" - six (!) Completely different modifications of tanks;
- Perspective "Object 195" with unique technical characteristics.
According to experts, many technical solutions of this tank were borrowed in creating the now well-known prototype of the Armat tank;
- Loader universal small-sized PIP-500;
- Excavator on tracked EO-5126;
- Excavator wheeled EO-33211.
In addition, on the basis of "T-90" were developed:
- an improved engineering machine for lining the IMR-2MA;
- modernized engineering machine for lining the IMR-3;
- armored mine clearance vehicle BMR-3M), etc.

In total, over the period of work as chief designer from 01.12.87 to 13.05.99, Vladimir Ivanovich led the development and creation of 55 types of armored vehicles, engineering vehicles based on tank chassis, road construction equipment and other sophisticated vehicles.

During the period of his management of the enterprise, the work of the UKBTM workshops was transferred to 3-shift work, and all employees received their salaries regularly and on time.

This allowed UKBTM to take a leading position in the domestic tank building.

According to its importance for strengthening the defense capability of Russia, the listed merits of Potkin V.I. cumulatively must be evaluated separately and awarded the highest award of the country (posthumously).

For example: only for the supply by Ukraine of the 320 tank contract to Pakistan, the former chief designer of the Kharkov tank design bureau (KMDB) MD Borisyuk. He was awarded the title "Hero of Ukraine".
Let us recall once again that the ingenious designer of the T-34 tank, M. Koshkin, who did not live up to the start of serial production of his tank because of a serious illness, received by him during the historic run of two tanks on the route Kharkov-Moscow-Kharkov, everything after 50 years, he was awarded the long-deserved title of Hero (posthumously).
Like Koshkin M.I. Potkin V.I. accomplished the feat of self-sacrifice when introducing new tanks into production.
In our deep conviction, all the activities of Vladimir Ivanovich Potkin as the chief designer of the UKBTM in the most difficult 90 years of our country for the survival of the design bureau, Uralvagonzavod, the tank industry, and even its red death, similar to the death of a soldier in the battle to defend the Fatherland, should be commemorated by awarding him the title "Hero of the Russian Federation" (posthumously).

Dear Vladimir Vladimirovich!
We are veterans of UKBTM, participants of all the work carried out under the leadership of Vladimir Ivanovich Potkin, we petition for the award of the title “Hero of the Russian Federation”.

We ask to support our petition by awarding this highest rank to Russia to a person who, with his whole life, gave an example to young people how to love their homeland.

An urgent solution to this issue is necessary to perpetuate the memory of Vladimir Potkin, an outstanding tank designer of Russia on the anniversary of his 75 anniversary.

(Total 160 signatures. The list is attached. The original is kept in the archives of the UKBTM OJSC Veterans Council) 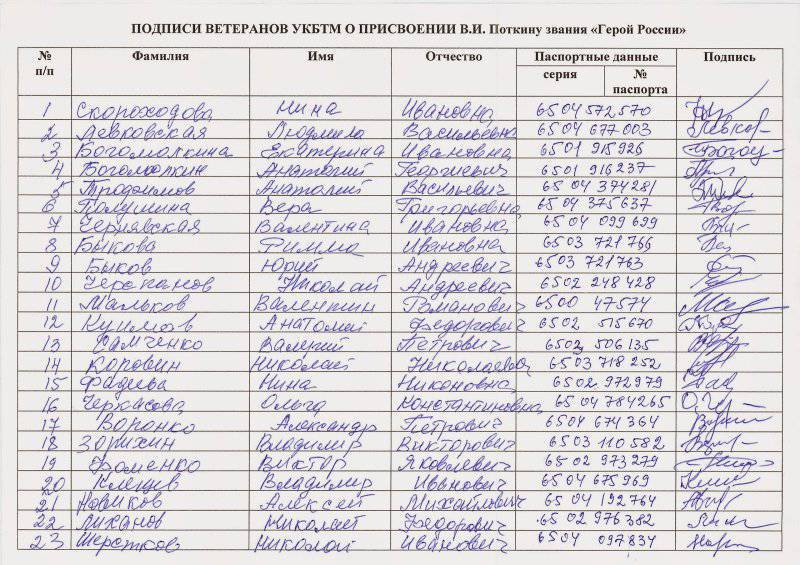 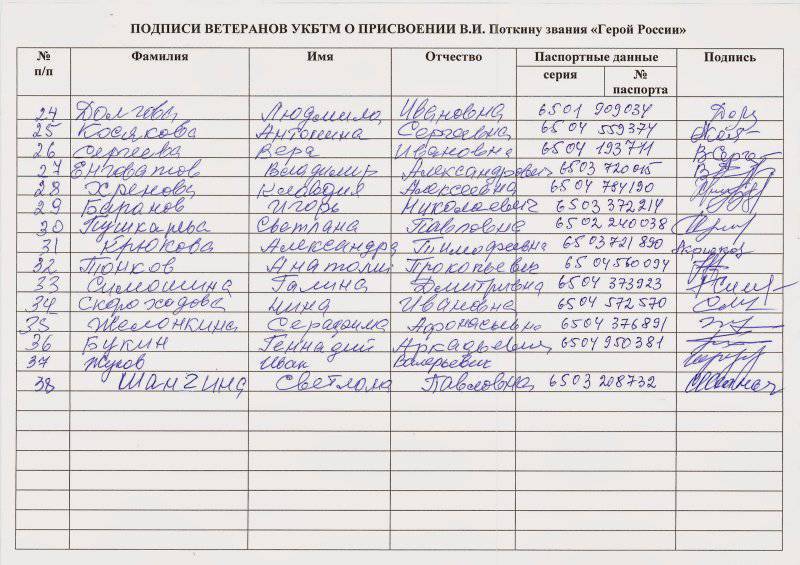 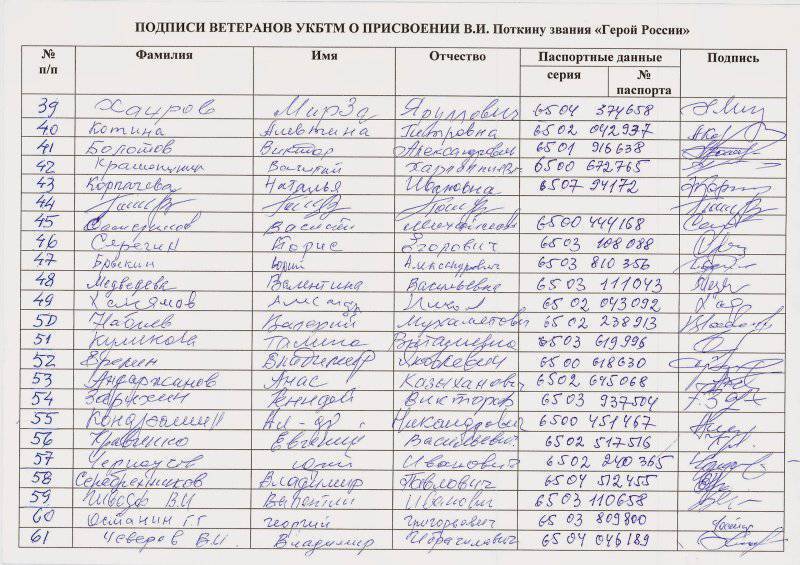 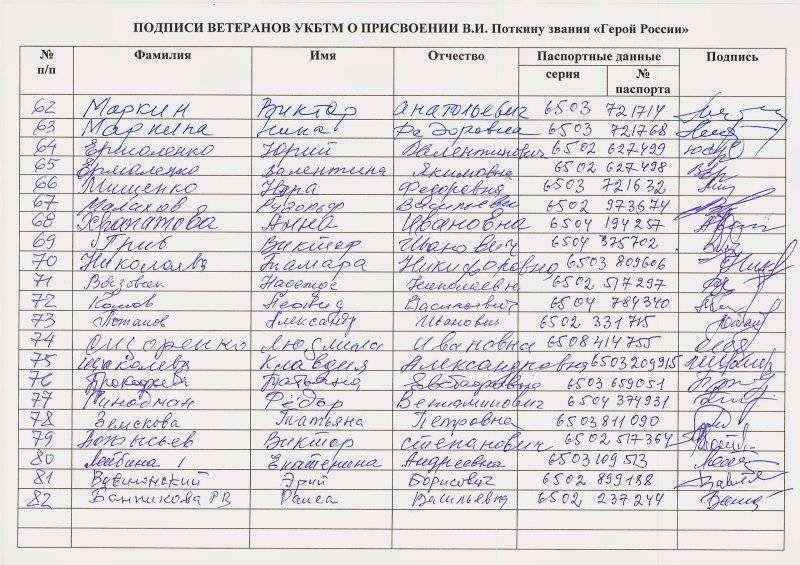 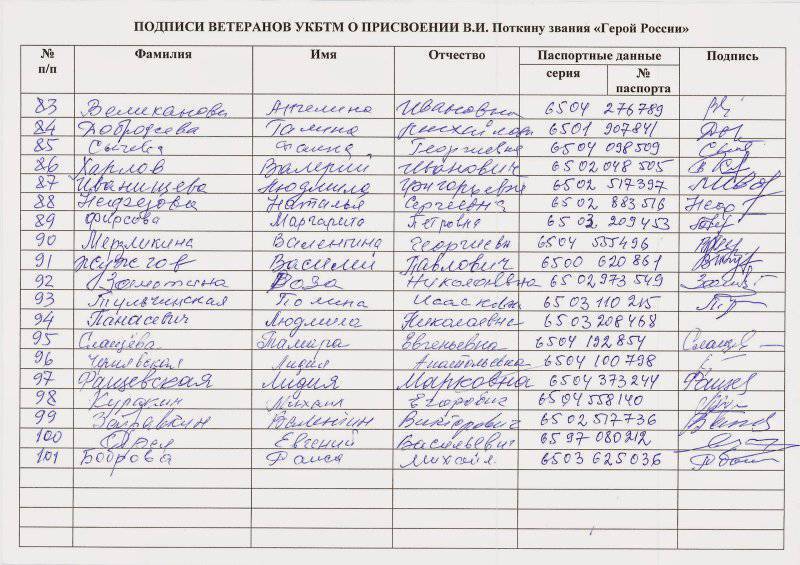 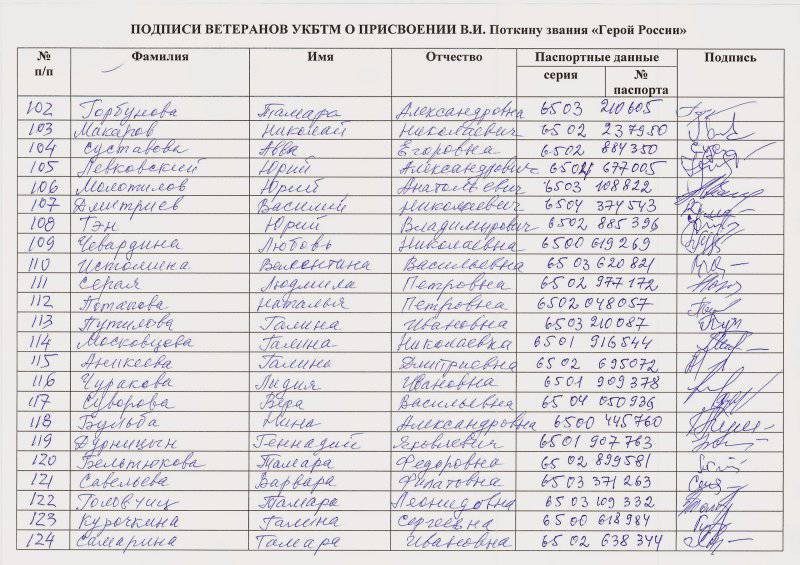 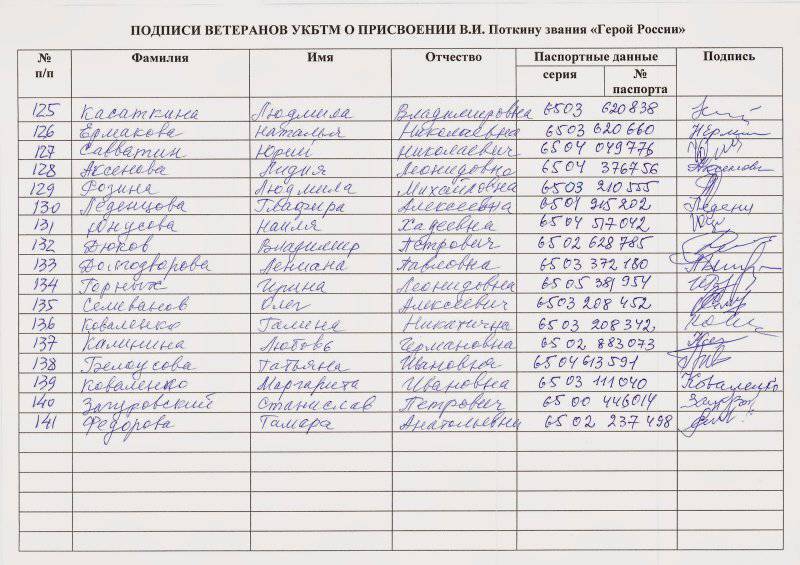 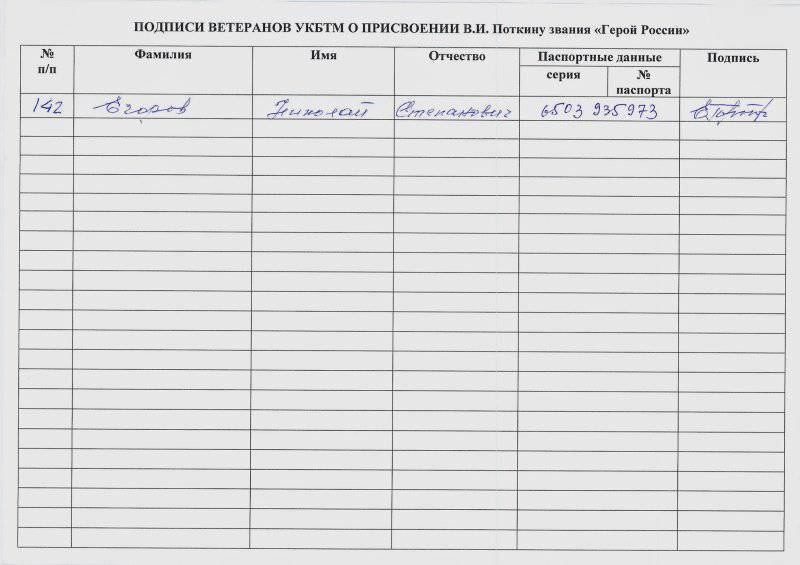 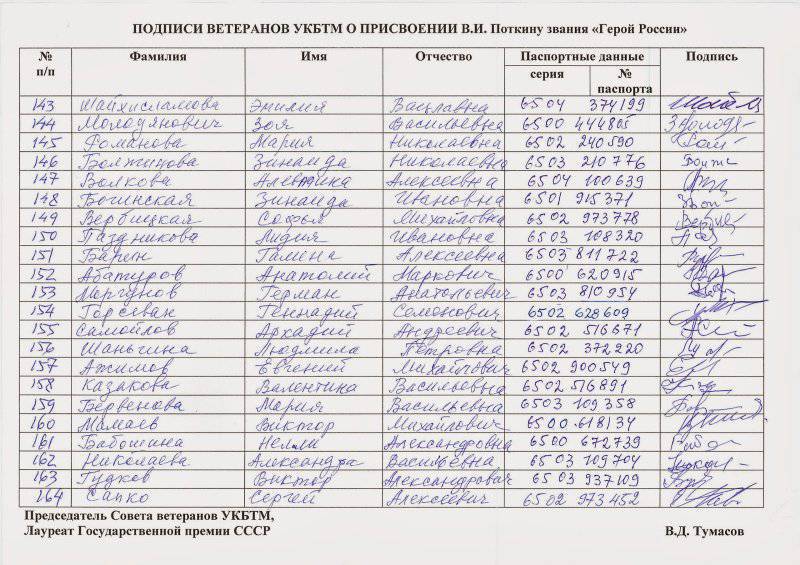 Ctrl Enter
Noticed oshЫbku Highlight text and press. Ctrl + Enter
We are
New plants and workshops in Russia in 2014 yearList of destroyed the largest and most high-tech enterprises
Military Reviewin Yandex News
Military Reviewin Google News
63 comments
Information
Dear reader, to leave comments on the publication, you must to register.