“This picture insults the patriotic feelings of the Russian people”

October 7 2013
235
You can not name the picture historicalsince this moment ... purely fantastic.
Konstantin Pobedonostsev


A number of historians and public figures asked to remove the painting of the Russian artist Ilya Repin, written in 1883 — 1885. - "Ivan the Terrible and his son Ivan," in the store. The appeal was sent to the Minister of Culture of Russia V. Medinsky and Director of the State Tretyakov Gallery I. Lebedeva.

According to the chairman of the organizing committee of the Popular Movement “Holy Russia” V. Boyko-Veliky, historian, professor of St. Petersburg University I.Froyanov, Repin’s painting, like a number of other paintings, contains slander against the Russian people, the Russian state and the Russian tsars. The great collection of the Tretyakov Gallery is intended to bring the light of enlightenment and creativity to the Russian people, and such works have no place in this collection of masterpieces. The picture reflects one of the “black myths” in relation to the great Russian tsar - Ivan the Terrible. Modern historical science has no evidence of the murder of Tsarevich Ivan Ivanovich by his father. Reliable information about this in the 16 century sources is missing. On the contrary, primary sources report the illness and death of the prince. Versions about the murder appeared later, as a rumor - with the prefix "Netsyi verb" (some say). This version was based on a very weak foundation - on the notes of obvious enemies of the Russian state, the foreign envoys of Jerome Gorsei and the papal nuncio Antonio Possevino.

The surviving originals of the materials of the Ambassadorial Order of that period, the case of the arrival of the Roman envoy Antonio Possevino, which included the Tsar's correspondence, allowed Academician N.S. Likhachev, who made these materials public in 1903, to conclude that Tsarevich Ivan died in Alexandrov Sloboda after an eleven-day illness, which seemed originally not dangerous. The reasons for this illness became clear in the 1963 year, when the tombs of Tsar Ivan Vasilyevich the Terrible and Tsarevich Ivan Ivanovich in the Archangel Cathedral opened. Scientific studies, medico-chemical and medical-forensic examinations showed that there is a presence of mercury in the remains of the prince, 32 times the norm of permissible content. An increased amount of arsenic and lead was also found. This is irrefutable evidence that the prince died as a result of poisoning with salts of mercury, arsenic and lead. In addition, the examination found no blood content in the prince's hair.

In the nineteenth century and in the beginning of the twentieth century. serious researchers and more prominent statesmen were doubtful about the version of the murder of his son by the king. Many considered the picture to be non-historical, including V. Stasov. A historian, academician S. F. Platonov, wrote about the slander of the tsar. In the modern period, Metropolitan of St. Petersburg and Ladoga John Snychev, I. Froyanov, A. Bokhanov, V. Shambarov and others opposed this slander. They argued that the "black myth" was created during the information war that was waged in the West against Russia. During the reign of Ivan the Terrible, the Russian kingdom fought hard for access to the Baltic Sea. In Europe, they then composed a whole series of various myths, “anecdotes” about Russia and the Russian tsar. Ivan Vasilyevich tried to turn into a real "beast in human form", "tyrant", "bloodsucker", "girl mate" and so on. Repin's picture became an echo of this slanderous campaign of the enemies of Russia. The myth was reflected in the picture and became very popular. Currently, the majority of Russian citizens are convinced that Ivan IV killed his son. Such is the power of the image created by a talented artist.

Patriotic historians and public figures believe that Repin "imbued with revolutionary theomachistic ideas," disregarded Orthodox traditions, and his picture was directed against the Russian autocracy, that is, against the Russian state. The picture, both in the past and at present, “has a profound psychological and emotional impact on the viewer, creating the effect of false“ psychological certainty ”, literally capturing in the memory of thousands and thousands of visitors to the Tretyakov Gallery. Especially dangerous is the impact on children who do not have a critical world view.

Tatyana Karpova, deputy director of the Tretyakov Gallery for Research, said that the artist painted the picture, relying on the work of the famous historian N. M. Karamzin, and the canvas is more likely not on a historical theme, but psychological, about the murder of a son by his father. In addition, if you remove the picture of Repin for unreliability, then what to do with the other picture on the mythological, biblical, fabulous themes. According to the director of the Tretyakov Gallery, Irina Lebedeva, this is a superficial view of our culture. If you follow the course of thought of the authors of the letter, you will also have to ban many movies that do not correspond to historical authenticity, etc. In addition, the artist has the right to his creative vision of the event. Lebedeva, in an interview with the journalists of the radio station Ekho Moskvy, said that the situation had arisen with the personal public relations of specific people.

Culture Minister Vladimir Medinsky called the statement by patriotic historians and public figures “a joke.” According to him, he refers to such statements ironically and expressed the hope that the authors were joking. The Minister also noted that it is necessary to distinguish historical facts from fiction, "there is art, but there is history." 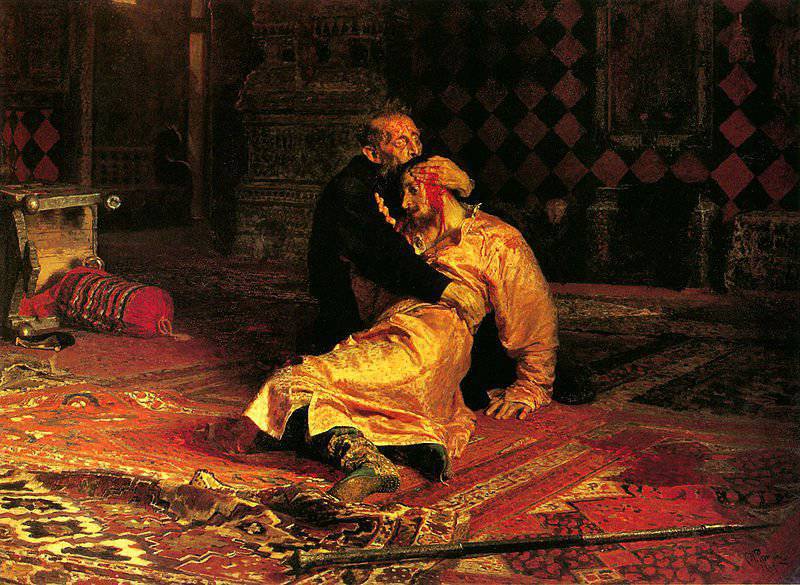 From the history of the painting

The artist, in an interview with the correspondent of the newspaper "Russian Word" reported that the thought of the picture originated after being impressed by the symphonic work of N. A. Rimsky-Korsakov "Revenge". Repin described it as follows: “These sounds captured me, and I wondered if it was impossible to embody the mood that I created under the influence of this music in painting. I remembered King Ivan. ” In addition, he was affected by the death of Emperor Alexander II: "Some kind of bloody streak went through this year, my feelings were overwhelmed by the horrors of modernity, ... I worked spellbound."

The artist began working on this painting in Moscow, where a costume was made for Ivan the Terrible and his son. The throne, mirror, caftan of Tsar Ivan were painted by Repin from life in Armory ward; the artist found a chest in the Rumyantsev Museum. In 1882, a pencil sketch was ready. But in Moscow, the artist could not finish the work, he moved to the capital. However, during his visits to Moscow, Repin continued to work. So in the fall of 1884 he came to the old Russian capital, stayed here for more than a month, studying and sketching various historical objects for this picture in the Kremlin Armory. The picture was completed in St. Petersburg. The tsar wrote some old man found for him by the artist P.P. Chistyakov, from the artisan, whom he met on the street, from the composer P.I. Blaramberg, and from the artist G.G. Myasoedov. The image of the prince was written by writer V.M. Garshin. In him, the artist was attracted by a certain stamp of doom on his face (the writer really died soon after that). The painting was exhibited in March 1885 at the XIII Traveling Exhibition in Moscow. The picture turned out great both in mastery of performance and in power, in the strength of the psychological disclosure of the characters of people and the impact on them.

This power was also appreciated by its critics. The chief procurator of the Synod of Pobedonostsev wrote to Emperor Alexander III: “Today I saw this picture and could not look at it without disgust. Amazing art now: without the slightest ideals, only with a sense of bare realism and with a tendency of criticism and denunciation. " The picture did not like the sovereign. P. Tretyakov, who bought the painting, was instructed not to exhibit it. Repin's work was the first picture that was censored in the Russian Empire. True, after a few months the authorities softened their position, the painting was allowed to be exhibited in the Tretyakov Gallery.

Ctrl Enter
Noticed oshЫbku Highlight text and press. Ctrl + Enter
We are
Sons of ivanFrom the history of own names of aircraft of Russia, 1885-1917 years
Military Reviewin Yandex News
Military Reviewin Google News
235 comments
Information
Dear reader, to leave comments on the publication, you must sign in.