China presents not only an economic, but also an ideological challenge to the West

October 7 2013
63
The leadership of the Communist Party of China circulated among the members of the CPC a circular in which Western democratic values ​​are defined as a threat to the country's national security. 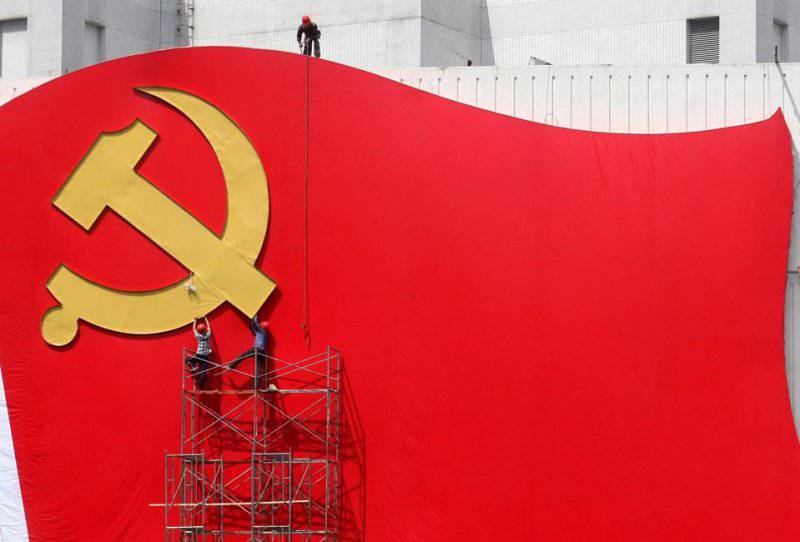 The Chinese know firsthand what "Western democracy" is ... Yuanmingyuan are the ruins of the Old Summer Palace of the Chinese emperors, once compared with Versailles. The Chinese authorities essentially refused to restore it. The ruins show the true appearance of Western democracy. The palace was destroyed by English and French marauders in 1860 at the conclusion of the Second Opium War. The circumstances leading up to her were as follows.

As soon as the Crimean War ended, the winners — Britain and France, as well as the United States that joined them — fell on China. In 1856, with the signing of the Paris Peace, the Crimean campaign ends and the Second Opium War begins in the same year. The reasons for the opium wars unleashed by the West, paradoxically, were related to the tea trade. It is known what importance the tea had in the system of consumption of the English. Tea drinking has become virtually an English national ritual. However, the necessary financial resources for the purchase of tea in the necessary volumes from England was not available. The Chinese did not recognize foreign currency, and agreed to sell tea only in exchange for silver bars. But the requirements for tea in England were such that the total world reserves of silver would not be enough to satisfy them. This meant a dilemma: either to abandon the current system of consumption of the British gentleman, or to find the appropriate barter. Russia has found furs as such a barter. English became barter opium. "Opium ships" began to be organized for shipment to China as early as the 70s of the 18th century. Opium in Bengal plunged on ships that went to China, where the smuggled goods were exchanged for tea, and he went to London. The belated attempts of the Chinese authorities to counteract this scheme became the cause of two opium wars. West breast defended free trade, despite the fact that the goods in it was opium.

In China, they are well aware that in order to ensure their domination and just a comfortable life (for example, to consume tea). West is ready to repeat the script 1860 of the year. To avoid this, China must be sovereign and strong. But how can this be achieved under the conditions of the hegemony of the West?
And here begins a great geopolitical game.

She was started in 1970-e years. Maoist China was by that time a scarecrow of the Western world. But here, in their relationship there is a fundamental turn. The West began to work on strengthening China, creating a geopolitical counterweight to the USSR. Supporter of the concept of "Chinese counterweight" was, for example, Z. Brzezinski. Western investment flowed into China. A large part of the western industrial sector was transferred there. China, along with a number of other East Asian countries, is becoming the “assembly workshop” of the West.

China, in turn, refuses to frighten the West with Maoist ideologies. Denotes the drift vector of China in the direction of capitalism. But at the same time limits of retreat were set. China has never abandoned the communist ideology. To make sure of this, it is enough to open the PRC Constitution adopted in 1982.

Inside the Chinese elite, there are currently two main clan groups. Conventionally, they are referred to as the "Shanghai" and "Beijing" clans. Shanghai - supporters of Deng Xiaoping. The Shanghai scenario was a scenario of the capitalist drift of the PRC. Peking are sticking to the left platform. Their ideology is neomaoism.

For a long time, power was concentrated in the hands of the Shanghai group.

The view was replicated that modern China is concerned exclusively with the economy, while the tasks of external ideological expansion are not in the current development agenda. But now, China has reached the position when it can already be positioned as a superpower, capable of challenging the struggle for world hegemony of the United States.

In accordance with this challenge of time, the position of the Pekingans in China is strengthening. The Secretary General of the CPC Central Committee, Xi Jinping, who was chosen in 2012 initially, was assessed as a compromise figure between the Shanghai and Pekingans. But, having come to power, he definitely took the side of the Peking clan. This was manifested in both political steps and personnel appointments. The PRC, with him, will obviously strengthen ideological propaganda.
The world is once again entering a period of global struggle of ideologies. China is more and more definitely trying to take the position of one of the poles in this fight.

Ctrl Enter
Noticed oshЫbku Highlight text and press. Ctrl + Enter
We are
Forced openness. Will the US solve its problems in economic relations with China with the help of the “new opium wars”?The death of the elder brother. The lessons of the crises China teaches very carefully
Military Reviewin Yandex News
Military Reviewin Google News
63 comments
Information
Dear reader, to leave comments on the publication, you must to register.