Why did the west lose the second world war? 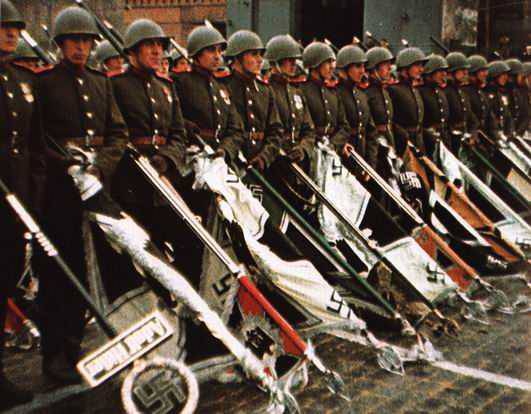 It seems to many Russians that we live in the era of Western triumph. West surrounds us everywhere. He reigns in models of popular cars and in labels of fashionable clothes, in photos of pop idols and in political brands. We are literally and figuratively dancing to Western music. Who can doubt the triumph of a victorious civilization?

It seems to many Russians that we live in the era of Western triumph. West surrounds us everywhere. He reigns in models of popular cars and in labels of fashionable clothes, in photos of pop idols and in political brands. We are literally and figuratively dancing to Western music. Who can doubt the triumph of a victorious civilization?

But this is a look from Khimki or from Odoev. View of people who survived the collapse of the “iron curtain” and literally knocked down by a mighty avalanche of forbidden values, gushing because of a broken dam. With a fright, we are even ready to declare banal market relations a “Western achievement,” although the market existed in ancient Sumer or Xi'an thousands of years before the construction of Wall Street.

And at the same time, the American ideologist Patrick Buchanan writes the book Death of the West. Epathetic name given not for the sake of advertising sensation. Each line contains the sincere concern of a US patriot not only for his country, but for the entire dying Euro-Atlantic civilization.

Bust, you say? Yes, this is probably too much. But what is really happening with the West? Is he advancing or dying? Or is it dying?

When you sit on the shore, admire the rolling waves, you meet the ebb and flow, it is difficult to understand: the sea is coming or going. To give the right answer to the question, you need to push the horizon of time. It is necessary to find reference points - lighthouses and moorings of a century ago. If we return from the seashore to stories civilizations and start looking for the right beacons in the past of mankind - the answer will not be in favor of the West.

The first concept of "civilization" in the scientific revolution introduced the British Arnold Toynbee. In history and cultural studies, he played the same role as Linnaeus in botany, and Mendeleev in chemistry. His modern world Toynbee divided into seven living civilizations: Western, Russian, Middle Eastern (heirs of Byzantium), Islamic, Hindu, Far Eastern (Chinese) and Japanese. The British genius was convinced that "... six out of seven societies bear the marks of the breakdown that has already taken place and the transition to the stage of disintegration." Moreover, “the West has put its contemporaries in a hopeless situation, having caught in the network of economic and political power”. So Toynbee wrote in the thirties, on the eve of the Second World War, and his assessments coincided entirely with the mood of the western man in the street.

But less than two decades, the complacent self-confidence of Western people gave way to panic phobia “Russians are coming!” After half a century, the Russian question was temporarily removed from the agenda, but new giants rose - China and the Islamic world, whose current situation cannot be called “hopeless”. In general, Toynbee himself, immediately after World War II, parted with the former categorical nature and transferred his native Western civilization from the category of unconditional leaders of the planet to the category of conditional ones.
Let us think about the position occupied by the West (that is, Protestant-Catholic Europe and its related Anglo-Saxon countries of the New World) in the years of Toynbee's creative work and what is happening with the West now, before our eyes?

At the beginning of the twentieth century, there was a powerful export of Western culture to all, without exception, countries of the world. Other values ​​of the West itself collected only as a museum. Today, no one will turn the language to call African rap, Indian yoga, martial arts or the Chinese horoscope museum values. Other people's roots have deeply invaded the life of Western society and increasingly affect its popular culture.

At the beginning of the twentieth century, the western population grew at an accelerating pace and created its own colonies in the new lands (the French in North Africa, the British in South, as well as throughout previous centuries in America and Oceania). Today, the number of Western peoples is declining, and people of other civilizations not only lead a “demographic reconquest” in Transvaal and Texas, but actively colonize the heart of Europe, where the stranger has never walked before.

At the dawn of the twentieth century, Western countries produced more than 90% of world industrial output and three-quarters of the planet's GDP. Today, they account for no more than half of global production, and economic dynamics clearly do not promise revenge for the West. American stores are already flooded with Chinese goods, as well as pharmacies with Indian medicines.

Finally, the most obvious changes concern the division of the world. One hundred years ago, all non-Western countries of the world (except Russia) were either colonies or semi-colonies of Western civilization. According to the rules of the famous game of the same name by Sid Meier (“Civilization”), domination on 66% of the planet’s territory means a global victory. And the West controlled more than 80% of world sushi! Now all the colonial administrations have gone home, and there’s no direct territorial control. Even about the control of the occupied Iraq and Afghanistan, where NATO soldiers do not risk leaving their strongholds!

So, no doubt, the West these days is a retreating civilization. Still very powerful, very influential - but forced to retreat, like a cancer, under the onslaught of rapidly developing neighbors around the planet. Moreover, such a comprehensive retreat takes place for the first time in a thousand-year western history, for the first time since the Crusades.

When did this landmark break happen? When did the sun of the West pass through its zenith? In the dating of this event, too, there is no doubt. The rise of the West ceased immediately after the 1945 of the year. The collapse of the colonial empires occurred after the fall of the Reichstag (on a historical scale - almost instantly). As soon as the red flag rose above the German capital, and after two decades, many national flags decorated the capitals of the former colonies: from Jakarta to Suriname, from Dakar to Hanoi.

The connection of the outcome of the Second World War with the collapse of the colonial system is all the more surprising because the empires collapsed, formally belonging to the camp of the victors: French, Belgian, Dutch and even British. If in the 1920 year, following the results of the Versailles, the possessions of Britain and France expanded at the expense of the vanquished, the consequences of Potsdam turned out to be completely different.

It is ridiculous to link the post-war world parade of sovereignties with the humanism of the Western democracies - we remember that each concession was preceded by fierce liberation wars and colonial expeditions. But after the 1945 year, these expeditions could not do anything. The world has become different. And the matter is not only in the arisen bipolarity, not only and not so much in the calculation of the native partisans for Soviet assistance. After 1945, the myth of the notorious superiority of a Western man, his innate right to domination, collapsed.

The defeat of German Nazism, the collapse of the concept of the "higher race" meant the failure of the entire global strategy of the West. The "white man's burden" sung by Rudyard Kipling lost its ideological foundations. Without him, "to rule a stupid crowd of Half-Devils, Half-Children" ("Half-devil and half-child" by R. Kipling. "The White Man's Burden") turned out to be impossible.

The Russians proposed an alternative philosophy of the universe, based on the equality of all people, regardless of racial or cultural background. And although the ideology of the true winners of 1945 of the year was clothed with the materialistic formulas of communism, in fact it went back to the Gospel sermon: "There is no Greek, no Jew, no Scythian, but Christ in all."

After the Russian victory, every person of the Third World colonized by the West could feel about the same thing that the little Indian himself felt from Nikolai Tikhonov's poem:

"As if he was born again in Amritsar,
but this time - HUMAN.
Never hit him again
Evil sahib with its cruel stack. ”

Having defeated German Nazism in World War II, the Russians proved to the whole planet that people of other races and cultures are not half-devils and not half-children, but the same PEOPLE who have an equal right to original development. In this development, they don’t dare to ponder with a stack of German, British or American sahib, even if very concerned about their messianic “white man’s burden”. The concept of a multipolar world triumphed over unipolar.

This is the main ideological outcome of the Second World War. In fact, the existential question of the world being was solved on its battlefields. I would formulate this question in the following way: are all the people of the planet — brothers created by God alone (as Christ teaches)? Or is humanity generated by unequal tribal totems (as paganism teaches) and there is a natural hierarchy of "higher" and "lower" peoples?

Despite the outward acceptance of Christianity, Western civilization from birth believed in the inequality of nations and in its absolute superiority over the surrounding societies. Hitlerism was not an aberration, as many believe, but the quintessence of Western political practice. Hitler’s defeat at the hands of a non-Western, “barbarous” civilization led to the deepest flaw in the traditional Western worldview and the beginning of the extinction of Western civilization as a whole.

Instinctive awareness of this, depressing domestic and foreign Westernizers of truth, makes them prove the unprovable with triple energy — detract from the role of the Soviet Union in the 1945 Victory of the year, at the same time exalting the role of Britain and the USA.
But this topic deserves a separate discussion.