The case of "Oboronservis." The climax?

October 7 2013
283
Oboronservice "Santa Barbara" is entering the climax stage? We don’t know, don’t know ... But the investigative authorities indicted the defendants in the Oboronservis case in the final version. “In the final version” is according to the representatives of the Main Directorate of Military Investigations (the Main Military Investigation Department). What is the "final version" of these accusations, at least in the example of one of the persons involved - let's try to understand more. 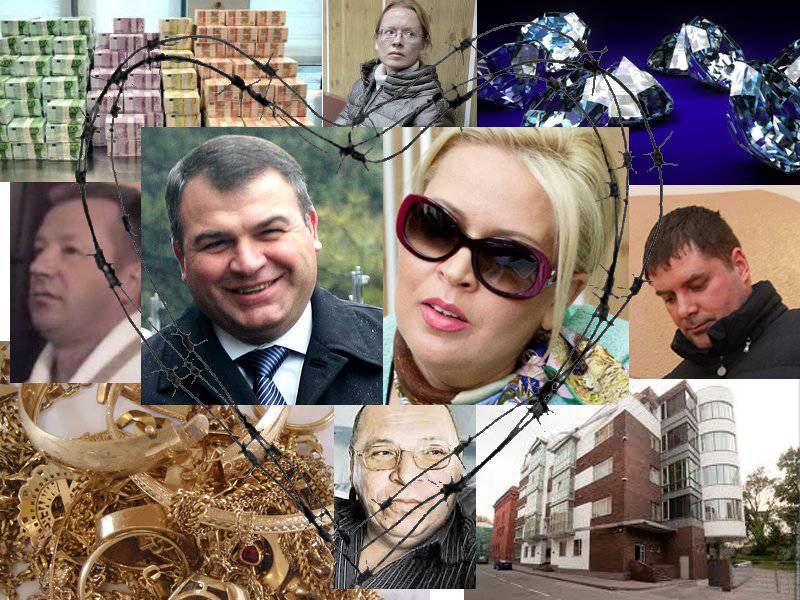 Regarding the time to become a superstar of domestic corruption, Evgenia Vasilyeva, charges were filed on a dozen episodes. All these episodes fit into four articles of the Criminal Code:

article 285 "Abuse of authority" (the maximum term under the article - 10 years in prison);

Only in fairness it must be said that all maximum terms “shine” to those persons who are “in a group”, “by prior agreement” or “with especially grave consequences”. The choice of the first paragraph of Article 174 by the investigation suggests that the GVSU is not ready to give Yevgeny Vasilyev the status of a representative of a criminal group. You know, I myself acted alone ... But, even if we partially sum up all the episodes that Vasiliev was accused of, then there would be plenty of time for sewing the jackets. Another thing is that in addition to the investigating authorities, we still have a court, and the Russian court often shows heightened humanity towards robbers of billions and suspicious anti-humanity towards those who stole a supermarket in a supermarket, for example, for the first time ...
Despite the fact that the damage inflicted to the state personally by Eugenia Vasilyeva is about 3 billion rubles, her lawyer does not lose heart, as his client himself does not seem to lose heart. Hassan Borokov (namely, he is the lawyer of the lady from Molochny Lane) stated (quoted from Interfax):

I hope that, if the law is observed, all the charges against Vasilyeva will be dropped due to the absence of corpus delicti in her actions. We believe that the case will not even go to court.

Here is how! The lawyer is not embarrassed by the fact that 57 thousands (!) Precious stones of the total mass (together with precious metals) already 19 kilograms were found by investigators in the apartment of his client, even 19 kilograms, or the amount of money needed to purchase XNUMX kg of diamonds , rubies, emeralds, gold and platinum, a whole set of expensive watches, Evgenia Vasilyeva needed to work hard for at least three of her lives ... Maybe he allows for a series of reincarnations in relation to her client, during which she had time to otat to "two buckets" bryulikov ...

GVSU representatives say that they collected an evidence base confirming the information that Evgenia Vasilyeva was selling state property to affiliated persons and structures at a lower price, after which this property was sold at market price, and the proceeds from such sales dropped into the accounts of combinators from "Oboronservisa." Such accounts (belonging to Vasilyeva) were arrested, in particular, in one of the Swiss banks.
At the moment, in relation to the activities of Oboronservis and, let's say, parallel structures, 25 criminal cases have been initiated, which are combined into one proceeding. The list of persons involved in the Oboronservis case (under various types of arrest) is impressive. Besides Mrs. Vasilyeva it

Andrei Lugansky (director of Security and Communications), who, together with the chief accountant of the company, Yulia Rotanova, is suspected of embezzling 53 million rubles;

Ekaterina Smetanova, who is under a written undertaking not to leave her on suspicion of a whole series of frauds related to military real estate;

The total damage caused to the state by these (well, of course, not only by these) ladies and gentlemen amounted to more than 6 billion rubles - this is according to representatives of the GVSU SU IC of the RF.

It is noteworthy that the investigation of the time allotted by the norms of the Criminal Procedure Code has managed to bring official charges far from all the defendants. For example, the aforementioned Maxim Zakutaylo may even be released in less than a month, as it turned out that the prosecution's investigators had delayed ...

Well, and in relation to some gentlemen, whose surnames are suspiciously often featured in various reports about the machinations in the Ministry of Defense, the investigation generally behaves, to put it mildly, strangely. For example, representatives of the Investigative Committee have never stated about the interrogation of such a person as Valery Puzikov (the husband of the sister of the ex-Minister of Defense). This, despite the fact that after conducting a journalistic investigation by Komsomolskaya Pravda, it turned out that the Puzikov family are just some Rockefellers of the domestic “spill”. In the possession of companies and organizations, headed by Mr. Puzikov, there were dozens of real estate objects: land, houses, apartments, offices, warehouses, and even ... a public toilet in St. Petersburg on Novoladozhskaya. By the way, the house in Molochny Pereulok, where Vasiliev is imprisoned, according to Kosmomolka, also belongs to Puzikov. Viktor Baranets, who carried out a journalistic investigation, says that this is “the insatiability of hapuzhnichestvo” and “it gives rise to the insatiability to recruit more, more, knowing that you will not be caught”.

It is obvious that all these "defense service" torments have long been able to step beyond the framework of a regular criminal case. This is, in fact, about the prestige of the country, about the ability of the authorities to effectively manage the state, about the ability to build a common legal field for all (and not just for the elect). Therefore, it depends on the end result of this extensive business that there is no need to conceal, and the level of people's confidence in the Russian authorities.

Ctrl Enter
Noticed oshЫbku Highlight text and press. Ctrl + Enter
We are
"Santa Barbara" with the continuation: a new case against Evgenia VasilyevaSit, but at home. Evgenia Vasilyeva arrested in the case of Oboronservis
Military Reviewin Yandex News
Military Reviewin Google News
283 comments
Information
Dear reader, to leave comments on the publication, you must to register.