Fight at Khmelevka. From the staged exercises need to go 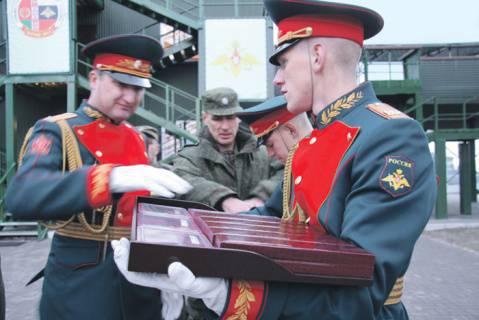 The Zapad-2013 exercises, which took place from 20 to 26 in September, at three Belarusian and two Russian (in the Kaliningrad region) testing grounds caused strong skepticism of many observers with their script. It is extremely difficult to understand where the large, well-armed terrorist groups in Polesie and the Amber region will suddenly come from? It is quite obvious that they have nowhere to take it. As a result, either hypocrisy came out (under the guise of fighting terrorists a classical war is being worked out), or absurd. It turned out rather absurd, since the exercises were really anti-terrorist. In particular, the battle with terrorists on the Baltic coast (at the Khmelevka training range) on the final day of the exercises was a frank performance (albeit spectacular), very far from real life.


This was indirectly confirmed by Russian Defense Minister Sergei Shoigu. At a meeting with experts and journalists the day after the “battle at Khmelyovka,” he said: “We need to finally abandon the staged exercises.”

Nevertheless, there is no reason to arrange another batch of criticism of the army for the “West-2013” for a number of reasons.

First, an absurd scenario is better than an exercise. Without a military training army die, meaninglessly devouring the people's money. From any point of view, the “battle at Khmelyovka” is better than the barrack massacre and the painting of dandelions in green.

Secondly, parts of the Armed Forces of Belarus and the Western HE of the Russian Federation in the framework of the CSTO operations may be in those regions where the anti-terrorism topic is really relevant.

Thirdly, the most important task of the exercise was to work out the interaction of the armies of the two countries in terms of the use of new equipment and control systems, and for this the exercise scenario is secondary.

Fourthly, during exercises in the territory of Russia (in the Nizhny Novgorod and Smolensk regions), things that had been forgotten over the past two decades were checked. We are talking about the interaction of the Armed Forces with civilian authorities and economic actors in a war and territorial defense. In Soviet times, the authorities, enterprises, and organizations should, during the period of danger and in time of war, present the armed forces with everything necessary, set out in advance in the mobilization plans. The current authorities, and even more so private structures that have appeared on the site of those enterprises and organizations, are not going to carry out anything. It is necessary to develop new mobilization plans, summarize them with a completely new legislative base and practice all this. Brand new challenges are also facing territorial defense (protection of rear facilities) in the conditions of the appearance of long-range high-precision weapons and a significant increase in the threat from well-trained sabotage units of numerous potential opponents.

In addition, the international dimension must be taken into account. Any exercises in the European part of the former USSR are furnished with a maximum of various restrictions under numerous international treaties. But this is not even the main thing. The “analytical conclusions” that have already appeared in our media that Russia and Belarus have shown to the West with these teachings that they will not allow the “Syrian scenario” to take place - a heavy paranoid delusion. The point is just the opposite. Since the beginning of this year, politicians and journalists of Eastern and Northern Europe (especially, of course, Poland and the Baltic countries) have been fanning outright hysteria about the “West-2013” (although these exercises were planned, they were known last year). There are still waiting for the "invasion of the Russian aggressors."

We do not need to laugh at this: European anti-Russian paranoia is no qualitative difference from Russian anti-NATO paranoia. Moreover, the first is more excusable. They are small and weak, and we are large and strong, so our paranoia is more indecent. Apparently, it was precisely in order to calm our western neighbors that the exercises were intentionally given the character that was farthest from the scenario of the classical (army against the army) war, especially from the development of the offensive operations of army formations. 80 tanks and 90 aircraft are not enough for aggression. Moreover, the maximum openness of the exercises was ensured: foreign military attachés occupied half of the Tu-154, which arrived from Chkalovsky, near Moscow, at the Khrabrovo airfield in Kaliningrad on the morning of September 26. Moreover, at the same time as Zapad-2013, Russia and Poland conducted joint air force exercises to intercept a passenger plane hijacked by terrorists, with the Su-27 deployed in the Kaliningrad Region taking part in the exercises from the Russian side.

According to Sergei Shoigu, large-scale exercises of the RF Armed Forces, different districts, fleets, military branches and types of armed forces are no longer a sensation and become a routine. They will inevitably lose their entertainment precisely because they cease to be staged. But they will be closer to the real scenarios of those wars and conflicts in which the Russian army and the fleet. The Minister also noted that in the sudden inspections through which all the Russian Armed Forces went through this year (the summer sudden exercises of the Eastern and Central districts were especially grandiose), it is necessary to involve CSTO allies, primarily the armies of Belarus and Kazakhstan (which is really useful and we still have mutually beneficial interaction only with them). This requires the development of a new regulatory framework.

Indeed, the maximum intensification of combat training and bringing it closer to reality become the “trademark” of the current minister. Moreover, a lot of attention is paid to strategic mobility, working out the actions of units, ships' connections on "foreign" theater of operations, at a considerable distance from the places of permanent deployment. In particular, inter-fleet transitions are constantly being worked out (and this is much more complicated than the transfer of ground forces and air forces within their own country, albeit over long distances). For example, if at the beginning of the year two Baltic BDK landed the Black Sea Fleet infantry on the coast of the Krasnodar Territory, then the Black Sea BDK Azov and the North Sea Georgiy Pobedonosets participated in the “battle at Khmelevka”, from which the Marines BF landed, respectively. The Pacific BOD "Admiral Panteleyev" was located for a long time off the coast of Syria, and now two Pacific BDK "Admiral Nevelskoy" and "Peresvet" also go there from Novorossiysk. And this is actually almost a routine.

The exercise also worked out the use of new technology, the receipt of which in the troops began in recent years. In particular, the Su-2013 fighter-bombers, all three corvettes of the 34 Ave, obtained by the BF from the 20380 of the year, were involved in the Zapad-2008 exercise. Of the four BDKs that represented all three European fleets, the marines landed on the BTR-82А that had just entered service. The arrival of new technology in the army is becoming more and more noticeable, although some randomness and unsystematic nature are seen here. The problem of dictatorship of the military-industrial complex over the Armed Forces (the military-industrial complex gives the army and the navy not what they need, but what it can create) took place back in the Soviet era, and in the post-Soviet period it was considerably aggravated. However, as in the case of the teachings, it’s better than nothing.

Unfortunately, in the case of rearmament, not everything depends on Shoigu. And ahead is a much more serious problem. There are big fears that the shortage of money forgotten in the past few years may return to the army. This trouble has objective reasons - serious problems of the Russian economy. But there are also subjective reasons: the installation of a certain part of the Russian elite that the Armed Forces is a parasite that senselessly devours money and is generally extremely harmful for the country. And the “exorbitant appetites of the military” must be curbed as much as possible. This installation is not just wrong, but criminal. Nevertheless, it is very strong and can work. Especially if it is carried out under the hypocritical pretext of the redistribution of military spending in favor of social. The hypocrisy here is that the social part of the Russian elite in fact is no more concerned about the strengthening of the country's defense.

A significant reduction in funding for the Armed Forces will break all the positive trends of recent years - the intensification of combat training, albeit chaotic, but re-equipping with new equipment, improving the conditions of service and the standard of living of servicemen. And it will be, without the slightest exaggeration, a catastrophe. The second shock in two decades will not stand, and their death is equivalent to the death of the country. It is necessary to understand this very clearly, before it is too late.

Ctrl Enter
Noticed oshЫbku Highlight text and press. Ctrl + Enter
We are
About Stalin and KhrushchevInterview by President Bashar Al-Assad to the Sunday Times
Military Reviewin Yandex News
Military Reviewin Google News
49 comments
Information
Dear reader, to leave comments on the publication, you must to register.