At no name altitude 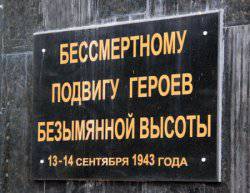 70 years ago, on the ninth kilometer outside the village of Vysokoye, Kuibyshevsky District, Kaluga Region, a battle for a height of 224,1 took place. This fierce battle became a symbol of the feat of those who stormed the impregnable positions of the enemy on the numerous nameless heights of the Great Patriotic War. In memory of the heroism of 18 Siberian soldiers who entered into an unequal battle with the enemy, members of the military-patriotic clubs of Moscow, Serpukhov and the Kaluga region held a militaryhistorical reconstruction of these military operations. 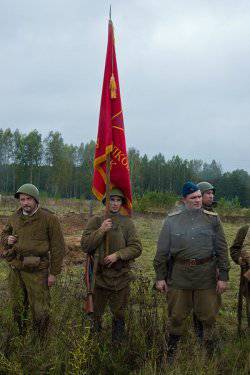 During the Smolensk offensive operation of Soviet troops in the autumn of 1943, in the offensive zone of the 139th Infantry Division of the 10th Army of the Western Front, the Soviet forces blocked the dominant terrain, the height of 224,1, blocked the dominant area over the area, and the city of Roslavl. It was reinforced with three rows of trenches, two tanks, self-propelled gun, densely dotted with machine gun nests, surrounded by minefields. Attempts by fighters of the 718th regiment to seize this stronghold of the enemy did not bring success. However, the 2nd Infantry Battalion managed to enter the flank of the German military guard, with a swift blow to drive the Nazis out of the villages of Plotina, Novaya and approach the height. They decided to attack the enemy at night, as the darkness deprived the enemy of many advantages and compensated for the lack of people, equipment and artillery. They formed an assault group of volunteers whose task was to break through to a height and provide offensive actions of other units of the regiment. Eighteen fighters volunteered under the command of Junior Lieutenant Yevgeny Poroshin.

At night, the strike team quietly crept to the fortifications. Siberians threw grenades at the first trench and the Nazis in it and rushed to the second row of fortifications. The suddenness of the attack, the swiftness of the actions made it possible to quickly overcome 600 meters and rush to the altitude. However, the company of the 3 battalion that followed them was cut off by machine-gun fire, and the assault group was surrounded by superior enemy forces. 18 fighters fought against several hundred Nazis until the morning. The battle lasted eight hours. The Germans launched four counterattacks. Only in the morning reinforcements broke through to the Siberians. The Nazis left on the battlefield more than a hundred corpses. And of the eighteen volunteers only two survived: Sergeant Konstantin Vlasov and Private Gerasim Lapin. Wounded and contused, they miraculously escaped - Vlasov was captured, from there he fled to the partisans, and Lapin was found by fighters among corpses.

The editor of the front-line newspaper, Nikolay Chaika, was one of the first with the advancing troops to reach anonymous height. He was shocked by what he saw: “In the puddles of his own and someone else’s blood lay our soldiers, who were clutching a grenade, who had a finger on the trigger of the machine gun. The entire height was literally littered with fragments, cartridge cases, empty disks, helmets. ” Later, he told about what he saw to the poet Mikhail Matusovsky, who after 20 years wrote poems to the song about anonymous height. If it were not for this song, beloved by the whole country, the feat of eighteen Siberians would have sunk into obscurity - there were many hundreds of similar battles for nameless heights during the war years. But thanks to the creation of Mikhail Matusovsky and the composer Veniamin Basner, the fighters standing for the height of 224,1 to death became an example of courage.

The memory of the dead "Porosintsy" is sacredly honored on Kaluga land. On the site of the 15 battle of September 1966, a monument was opened, and the 9 of May 1980 of the year was the Nameless Height Memorial.

The reconstruction of the battle has become traditional, but this year the scale of this theatrical performance and the number of participants and spectators was special. The event was held under the patronage of the Russian military-historical society. A thousand and a half people watched the spectacular action. About a hundred members of the military-patriotic clubs participated in the “battle”, some of which were dressed in the form of the Red Army soldiers, and the “Wehrmacht soldiers” were in gray-green uniforms. Used for the reconstruction of emasculated combat weapon since the Great Patriotic War.

According to the head of the initiative group of public organizations for the event, Viktor Maximov, the reconstruction participants tried to historically accurately recreate all the battle episodes at anonymous height. The documents from which enthusiasts scooped information, were very different. They mainly relied on the data of the website of the Ministry of Defense of the Russian Federation - OBD Memorial (www.obd-memorial.ru), where now in open access to the Internet everyone can find information of interest to him about the defenders of the Fatherland.

The battle scenario was as close as possible to the events of seventy years ago. As then, in the autumn of 1943, the fighters went on the attack and occupied the height of 224,1. The tasks of the assault group were fulfilled by members of the search team of the Russian military-historical society “Tuman” - VIC “477 Omrr”. Having taken all-round defense, they entered the battle. Siberians repelled several attacks of the Nazis ... 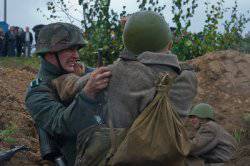 Of course, the recreated battle did not last eight hours, as in reality. However, the spectacle of even a reconstructed battle made it possible to present a fierce battle with the enemy. Pyrotechnic shells exploded, soldiers fired from weapons with blank cartridges, and signal rockets simulated volleys of a mortar, the air enveloped smoke, fired with the help of special means. Judging by the way the audience reacted emotionally to what was happening, the atmosphere of that battle could be conveyed in full after 70 years.

But there was a slight departure from the real battle. In addition to eighteen fighters, two more characters took part in the storm of anonymous height: the son of the regiment and the girl-fighter. They were a student of the 8 class of one of Moscow schools Aleksey Krupennikov, a member of the military patriotic youth club "Young Paratrooper", and a secondary school teacher from the city of Mozhaisk, Ekaterina Puzankova. ... It would seem that this reconstruction is so special? Well, dress up in historical costumes, play war. Someone will say - pampering. But not so simple. It is difficult to convey the feeling when a person puts on an old military uniform. In fact, he makes a journey into the past. And for the viewer such reconstructions are the best lesson in the history of the war.

Ctrl Enter
Noticed a mistake Highlight text and press. Ctrl + Enter
We are
Diplomats of the People's Commissariat of Defense: on the eve and during the warMyths of the Great Patriotic. Papier mache helmet
45 comments
Information
Dear reader, to leave comments on the publication, you must to register.