New army field uniform should be produced from Russian materials

October 4 2013
135
October 1 2013 was an exhibition and seminar in the capital of Russia, which was dedicated to the Russian field uniform (summer and winter). The exhibition-seminar was held in Rosoboronzakaz and touched upon the problems of placing orders for the supply of items to the army. The seminar was attended by representatives of the Russian Union of Textile and Light Industry Entrepreneurs, the Ministry of Industry and Trade, federal procurement agencies for the state defense order and other professional associations, as well as heads of enterprises of the country's light and textile industry.


At the exhibition-seminar, the participants were presented promising samples of uniforms for employees of Russian law enforcement agencies. Representatives of the industry also gathered with government customers to discuss ways to implement the Russian Government Resolution No. 269, which prescribes the use of components and materials only of Russian and Belarusian production in the production of clothing property supplied under the state defense order.

During the exhibition and seminar, the deputy director of Rosoboronzakaz, Alexander Dombrovsky, noted that clothes and shoes for military personnel of the Russian army, in accordance with the requirements of the Government of the country, should be made from materials of Russian and Belarusian manufacturers. Alexander Dombrovsky explained that at present, in the production of uniforms for military personnel of the Russian army, materials and components of foreign production are used, but the situation, he said, will soon have to change. Dombrovsky also expressed his confidence that in the near future - in the 2014-2015 period, Russian and Belarusian manufacturers will be able to fully master the production of textiles and leather, which are necessary for the production of uniforms for servicemen of the armed forces of the Russian Federation Russian law enforcement agencies and departments. 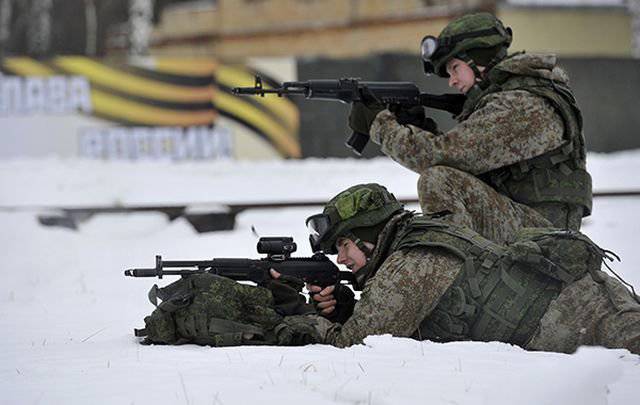 “We are focused on such steps by a resolution of the Russian government, which establishes additional requirements when placing orders for the supply of certain types of goods for the needs of federal executive bodies,” said the deputy director of Rosoboronzakaz. Alexander Dombrovsky drew particular attention to the fact that, following the results of the seminar, Rosoboronzakaz would develop a corresponding proposal to the Military-Industrial Commission of the country. According to the official, it is necessary to reach the new quality of the products supplied, to increase the effectiveness of the state defense order. “Such steps will allow Russian servicemen to perform the tasks that are determined by their intended use,” the official concluded.

Representatives of the country's Ministry of Defense, Ministry of Internal Affairs, Ministry of Emergency Situations, Ministry of Industry and Trade, as well as other interested ministries and departments from among the customers took part in the examination of the exhibition of the modern army field uniforms held in Moscow. Recall that the Russian army should completely switch to a new field uniform during 3 years. Until the end of this year, the Russian armed forces should receive 100 thousand sets of new field uniforms. In 2014, another 400 thousand field set will be delivered to the troops, in 2015 year - 500 thousand sets. All this will completely eliminate the need of the Russian Defense Ministry in military uniform for 3 years.

The new field uniform of the Russian army, which is known by the acronym WCHO - the all-season basic uniform kit, was presented to journalists and the public of 22 in August 2013 of the year in St. Petersburg, the uniform had already been put into mass production. The production of the new form for the Russian army is handled by the BTK Group in its factories located in the Leningrad Region (Boksitogorsk, Vsevolozhsk, Podporozhye). Currently, these factories are fully focused on the quality and timely execution of the order of the Russian Ministry of Defense. 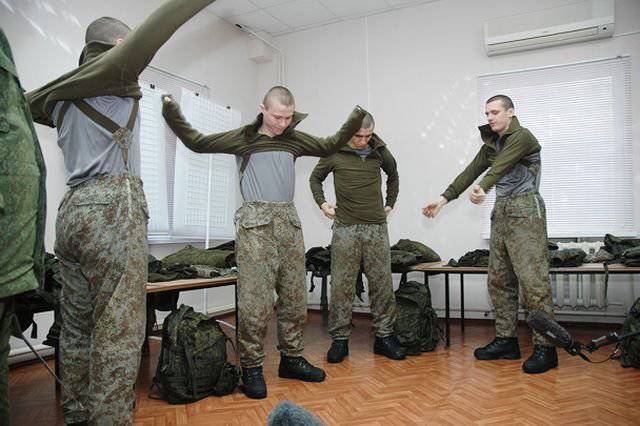 During the presentation of the WCBO, the main focus was on the convenience of the scheme with multiple layers (8 layers). Currently, the unit commander establishes only the appearance of a fighter: what kind of jacket, pants and headgear a soldier should wear. At the same time, all that is worn under them, the fighter is free to choose on their own, based on their personal ideas about comfort. The all-season basic outfit kit includes an 23 piece of equipment that can be freely changed and varied depending on the climatic zone in which this or that military unit is located.

The new form is different and a lot of "cosmetic" innovations. For example, the shoulder straps on it are back on the shoulders of servicemen, and the stars and stars will eventually be replaced with embroidered ones. The gates on clothes will become a thing of the past with time. In addition, this kit will not remain with the soldier after his demobilization from the army, as is the case today, but will be handed over to the storage warehouse for storage and further use by new draftees. It is assumed that the lifetime of one set of VKBO will be 3 of the year.

During the presentation, particular attention was paid to high-tech materials used in the production of the new field form. However, not all of these wonderful materials are produced in Russia. Andrei Podoprigorin, a representative of the form developer’s company (previously worked on the client’s side, was in charge of the ware supply of the Russian Armed Forces) assured journalists that if the Russian Ministry of Defense signs a long-term contract with the company for the delivery of a field uniform for a period of at least 3, then the relevant technologies will be fully localized in enterprises within the country. 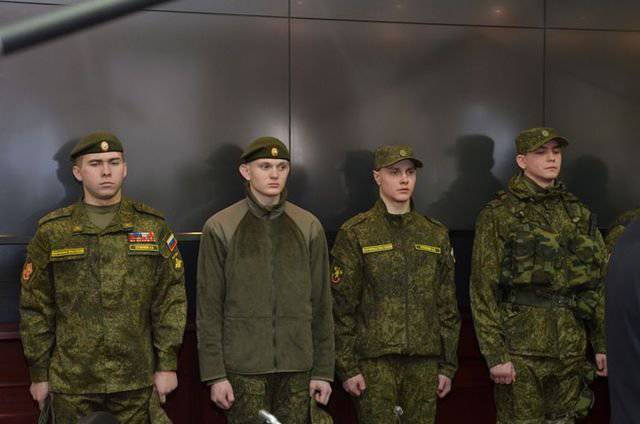 Speculation that the new field form - "cabbage" - as it was already called by Russian journalists and the military was copied from the American field form ACU - Army Combat Uniform for its layering, Andrei Podoprigorin retorted with this statement: "Tanks everything is similar in our place too - with armor, a tower and caterpillars. These are just today's trends in military field uniform. ” It is worth noting that the new field form, no matter what it looks like, came out really great. This is reflected in its value. In mass production, the price of each set of forms will be from 35 to 40 thousand rubles.