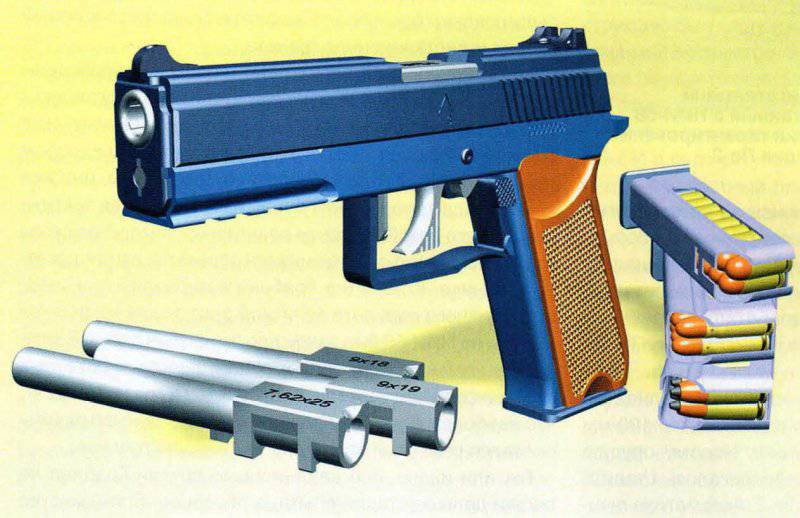 Having spent a lot of time looking for opportunities to expand the scope of a free gate, I am pleased to present to dear readers the stamped design of a self-loading pistol with a new principle of operation of automatics - a free gate with connection of the barrel.

Self-loading pistols produced by world-famous companies are archaic, non-technological, unreliable and very expensive. And how could it be otherwise, if the representatives of these companies openly declare that they use a steel weight in 2-3 kg for the manufacture, for example, of a bolt. In this case, the manufacturer does not explain, and the consumer does not ask how much it costs and what is being done. For some reason, both of them are sure that it is good to take and “cut out” from a three-kilogram piece of steel, a three-gram shutter. In fact, such statements are based on the widespread, but erroneous opinion of people that a piece milled from a single piece of metal is stronger than a stamped one. Meanwhile, the current achievements in the field of metal stamping and welding make it possible to manufacture it without loss of quality from sheet steel. Such a stamped valve will serve no less, but cost in 5-6, and even in 10 times cheaper. 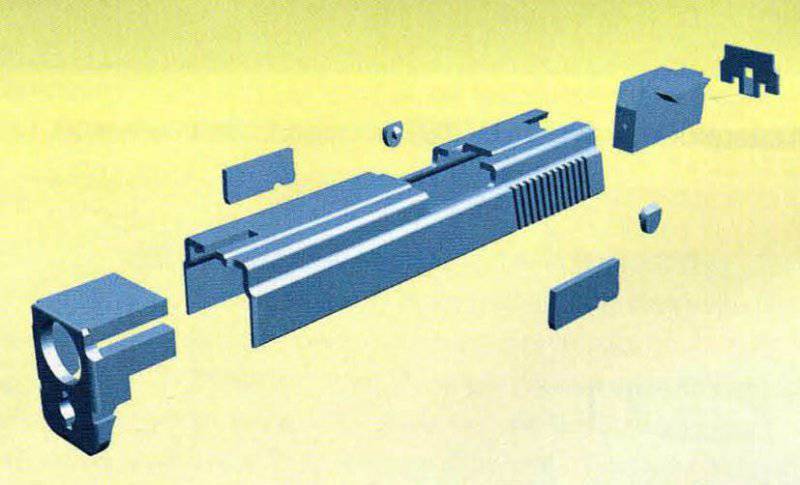 Technological scheme of the assembly of stamped-bolt

In most of the known designs of self-loading pistols, using cartridges with muzzle energy of more than 300 J, the weight of the moving system increases due to attachment to the barrel bore. So without increasing the weight of the bolt, and hence the gun, it is possible to keep the rollback speed within acceptable limits - 4-6 m / s. If the speed is greater, there is a risk of the gun breaking down, if it is less, there may be delays when shooting in difficult conditions - frost, dirt, shooting steeply up or down. This means that the faster the rollback, the more reliable and harder the automation works and, alas, the service life is shorter. weapons.

It should be noted here that not a single “coupled” pistol can be compared in reliability with a free-bolt weapon. The reason is the complexity of the design and the presence of large areas of fit and friction. To close the barrel, it is necessary to completely send the cartridge into the chamber. Even with minor contamination and under cartridge, the system is wedge. At the same time, the free shutter will provide a shot, even with strong pollution and underinvestment of the system to 2 mm, and only the shutter rim and the barrel end face each other in it.

Thus, it seems to me the most pressing task in the field of “pistol-building”, the essence of which is to create a simple, inexpensive and ergonomic sample, which combines the positive qualities of free and interlocking gates.

This task can be solved only by creating a self-loading pistol design with a new principle of operation of automation, which I called the free gate with the connection of the barrel. In fact, it is a system with an interlocked gate and a short barrel stroke, rotated at 180 degrees. As a result, the joint motion of the bolt and the barrel does not occur at the beginning of a rollback, but at the end - before striking the frame. The weapon is symmetrical, and all its details, except for the barrel and cheek, are shaped to allow them to be made from sheet steel and various profiles. 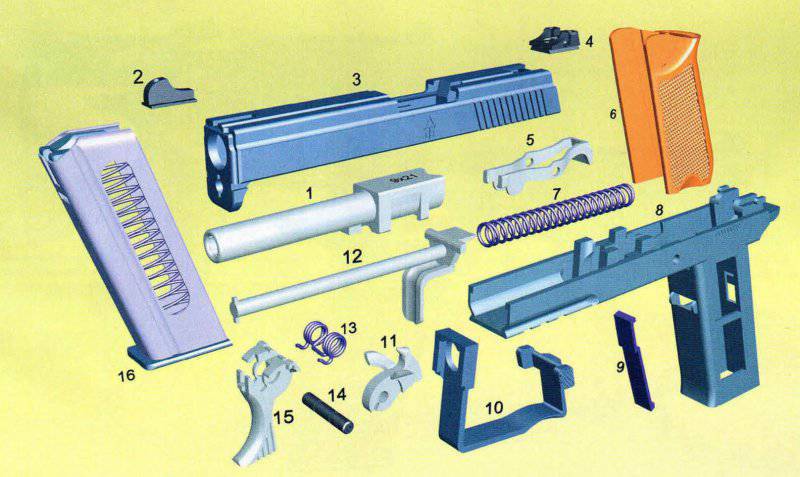 - the barrel is made with two stops, between which is placed the front end of the trigger guard, which performs the functions of the barrel spring, parts for disassembly and the magazine latch;

- the return mechanism guide is made with a protrusion for a finger and a sear with grooves and with the possibility of displacement in the longitudinal and vertical planes;

- the ejector sleeve mechanism is made with elliptical holes, which he put on the bolt pin;

- the trigger is made with a rear protrusion for the finger and three safety, two of which are placed in the grooves of the sear, and the third - opposite the notch in the guide return mechanism;

- the trigger is made with an elliptical hole under the axis and with a protrusion, ensuring the interaction of the trigger with the store feeder and the execution of the shutter stop function;

- fighting spring acting on the trigger has bent up ends that rest against the barrel, which provides unloading of the trigger when turning it forward;

- the frame is provided with stops for the barrel and the bolt, limiting their rollback, a spring-loaded latch of the cheek is installed on the back wall of the well for the magazine, with the possibility of fixing the liner for changing the cross-section of the well.

With special sets of barrels and magazines, you can shoot the whole range of 9 and 7,62-mm cartridges with muzzle energy from 300 to 600 J and length up to 35 mm from a pistol. The sleeve mechanism cleans up cartridges and cartridges of different lengths and throws them forward-up.

A simple calculation shows that in order to preserve the integrity of the cartridges of these cartridges during a shot, a sufficiently free bolt of weight 330 g. In practice, it will be possible to get by with an easier shutter in 300.

Assume that the barrel and magazine modules are installed on the pistol for firing domestic 9xXNNMX mm or 21XNNMX mm ammunition, both of them disperse the bullet to J. 9. Let's fire a shot.

During a shot, the shutter, weighing 330 g works as free. This means that by the time the bullet leaves the barrel, the cartridge case will go to 2,1 mm, and the bolt will start rolling back at a speed of 9,3 m / s. Such a waste does not threaten to break the liner, but the rollback speed is too high. Continuing the rollback, the shutter will go over the cartridge fed to the discharging line and bump into the forward-loaded barrel that stands in its path. The weight of the barrel 140 g, and being attached to the gate, it will increase the weight of the moving system to 470 g and, accordingly, reduce its speed to 6,6 m / s. Taking into account the action of the return spring and friction, the waste of the liner will be less than 2 mm, and the speed will be less than 5 m / s.

After that, the barrel and bolt will make a short joint waste, compressing the spring of the barrel, in this case 2 mm. Having come to the rearmost position, they will hit their rim on the frame. Such a blow is quite comfortable for weapons and for the shooter.

We will install a barrel and a magazine for firing with a 7,62xXNNUMX mm TT chuck with a muzzle energy of 25 J.

During the shot, his sleeve will go to 1,5 mm, which also does not threaten its rupture. The shutter will first accelerate to 7 m / s, and after connecting the barrel it will brake to 4,9 m / s, and taking into account the return spring to 4 m / s. There can be no talk of any destruction of a weapon, and the shooter will perceive such a return as soft.

Now let's take a set chambered for 9x18 mm PM with a bullet energy in 300 J. The cartridge is short and you will have to install an insert in the well for the store. 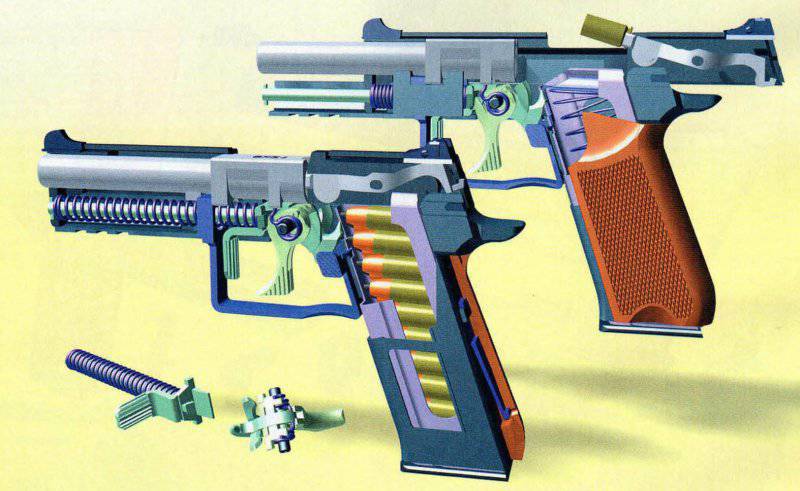 In the foreground - a pistol incision with a patron chuck and the fuse turned on, the shutter and the trigger are blocked. At the back - the slide on the slide delay, the function of which is performed by the trigger raised by the feeder. Below - return and trigger mechanisms.

When fired, the sleeve will go to 1,7 mm, and the shutter will roll first with a speed of 5,8 m / s and then 4 m / s. actually 3 m / s. For reliable operation of automation, this speed is enough, and the return will be very comfortable.

Thus, the reliability of this system is due to the fact that the bolt first performs the main work on recharging: removes the sleeve, compresses the return spring, overcomes the friction forces, and only then gives up the remaining energy, if any, to the barrel and then to the main mass of the weapon .

Equipped with a patron chuck, the gun is completely safe. Nevertheless, the weapon is equipped with a manual fuse, which is activated by turning the trigger forward. At the same time, the bolt, trigger and trigger are blocked. He turns off by pressing the key in front of the hook, which then, under the action of the mainspring, returns to its original position. The trigger also performs the functions of an uncoupler and a safety lock when the cartridge is not sent, in both cases it goes down, releasing the sear. The ejector performs the function of the indicator of the patron chuck, speaking at the same time on the back side of the bolt. Thus, the shot is possible only when the safety is off, the cartridge is sent out and the trigger is fully pressed.

For incomplete disassembly, remove the magazine and pull the trigger, which protects the weapon from self-disassembly, from a combat platoon. Then you need, freeing and lowering the rear protrusion of the trigger guard, move it down until it stops. After that, just slide the bolt forward and separate it along with the barrel from the frame. Separate the barrel. It turns out only four parts. 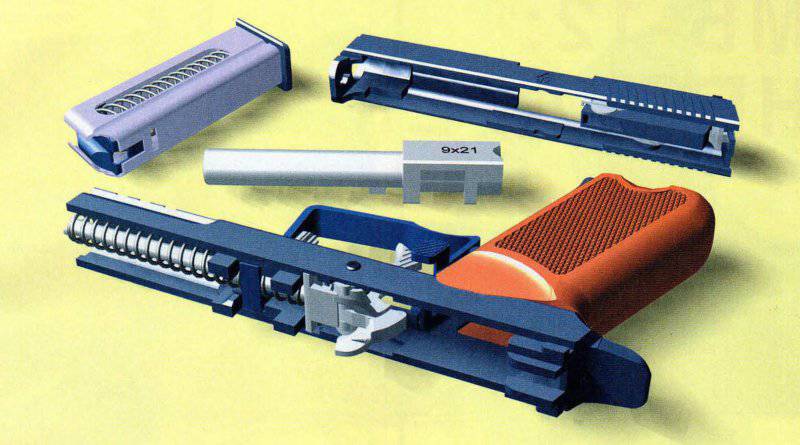 As a result of incomplete disassembly of the gun, four large parts are obtained.

For complete disassembly, further push out the USM axis and separate its parts. Then, removing and disassembling the return mechanism, it is necessary to separate the trigger guard and the ejector. Disassemble the store. There will be a total of 17 details.

The presented design, despite its simplicity and cheapness, is powerful and reliable, symmetrical in design and function, intuitively simple to operate and safe. For the first time, thanks to the new principle of automation, it really provides for firing cartridges of different power and length, with only the barrel and magazine being replaced. Its design is consistent with modern concepts of high-class weapons.

Unfortunately, a more detailed description of the device and the operation of the gun will take a lot of space and therefore I have to recommend to readers and critics not to rush to conclusions, but to be more attentive to the attached drawings, where you can find answers to many questions.