October 4 2013
24
The United States is mass-producing the latest Lockheed Martin F-35 Lightning II fighter jets, which are often claimed to be superior to all existing aircraft in combat performance. However, at the moment, the F-35 can not fully reveal its potential, using only existing types of weapons. Specifically, to expand the capabilities of the latest fighters, Lockheed Martin is currently developing a new air-to-air short-range missile. The result of a project called CUDA should be the creation of aviation missiles with higher performance compared to existing ammunition. 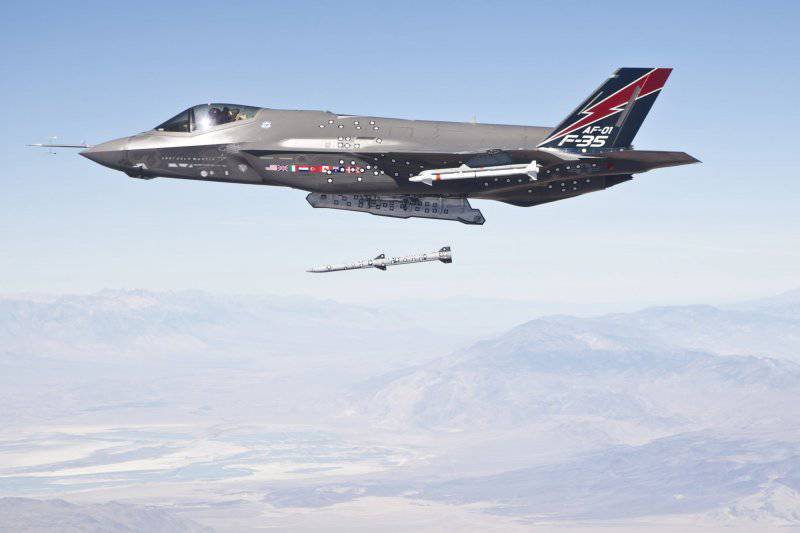 Work on the CUDA project started, tentatively, in 2010-11. As far as is known, Lockheed Martin registered the name of its new project as a trademark in 2011. Probably, by this time, the development of aviation ammunition had left the stage of preliminary design of the appearance. Last September, Washington hosted the Air & Space Conference and Technology Exposition 2012, organized by the United States Air Force Association. Some time later, Air Force Magazine published photos from this event. One of the photos showed a mockup of an F-35 fighter with some new missiles in the cargo bay. Soon, representatives of Lockheed Martin told about the existence of a new project called CUDA, and within the framework of the conference, its first demonstration to a limited number of people took place.

According to the developer, at that time the project was in the process of negotiating technical requirements with the customer in the United States Air Force. The main goal of creating a CUDA rocket was to increase the ammunition load of the newest fighters by two or three times. At the same time, talking about the new rocket to the general public, representatives of Lockheed Martin noted that due to the secrecy of the project, so far most of its details cannot be announced. In this regard, all publicly available information about the CUDA rocket are estimated. Estimates are made on the basis of published information and published images of prospective aircraft ammunition.

Despite the lack of information, you can imagine the approximate shape of the CUDA rocket and try to guess its prospects. From the photographs of the exhibition layout one can draw some conclusions about the dimensions of the rocket. In size, it is similar to the small-sized bomb GBU-39 SDB (Small Diameter Bomb - "Small Bomb"). Recall, the GBU-39 ammunition has a total length of 1,8 meter and a diameter of 19 cm. Thus, the CUDA missile is about half the size of the main American medium-range missile AIM-120 AMRAAM. It is the dimensions of the new missile that will allow in the future to significantly increase the fighter’s ammunition. The starting weight of the CUDA rocket is unknown. A comparison with AIM-120 suggests that this parameter of the new rocket will be within 70-80 kg.

Judging by the available data, the CUDA rocket will have an original powerplant resembling that used on some missiles of other classes. In the tail part of the hull will be placed solid sustainer engine. In addition, in the images of the rocket, in front of the case, characteristic perforation is noticeable. Probably, in addition to the aerodynamic rudders, the promising aircraft ammunition will receive a large number of gas rudders. Such a control system is able to provide high maneuverability. The ability to actively maneuver the CUDA rocket is necessary due to the original method of hitting the target.

Representatives of the company-developer have already said that the CUDA rocket will not carry the warhead in the usual sense. It is assumed that this ammunition will carry out the so-called. kinetic interception. This means that the missile guidance system must point it exactly at the target. Moving at high speed ammunition can cause serious damage to the target only with the help of its energy. This method of attacking a target has both advantages and disadvantages. The undoubted advantage of the kinetic interception is the possibility of rocket relief, since it does not need a separate warhead with an explosive charge and a fragmentation shirt or ready-made fragments. The main disadvantage of this method of destroying targets is the need for a guidance system capable of providing a missile collision with a target at high flight speeds. 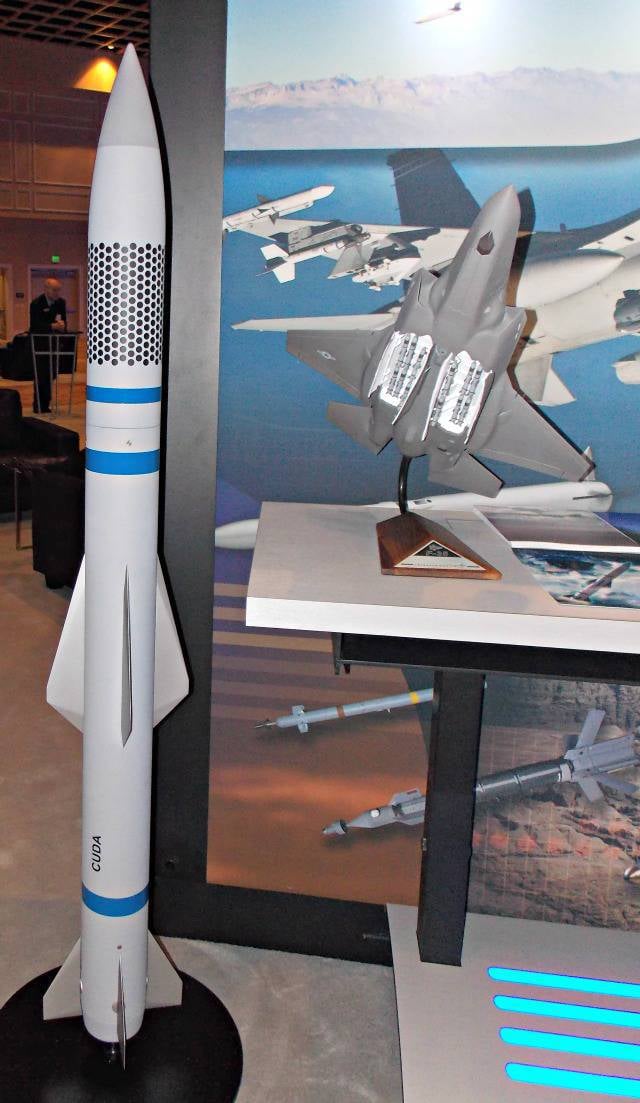 At the moment, it is known that the CUDA rocket will be equipped with an active radar homing head (ARGSN). This will make it possible to conduct a missile combat using the “launched-forgotten” method. However, such a homing head raises some questions for which there are no answers yet. Thus, the existing kinetic interceptors used in US missile defense systems are equipped with infrared homing heads (ICGSN). After the announcement of information about some of the details of the CUDA missile appearance among specialists and the public interested, doubts arose as to the viability and prospects of using an active radar seeker. However, it is worth remembering that the CUDA project will reach the testing stage only after several years. Therefore, the designers of the company Lockheed Martin have enough time to create and refine a workable system with the required guidance accuracy.

In the context of a promising missile guidance system, it is also necessary to recall assumptions about the reasons for which CUDA will receive ARGSN. This type of homing head may be more suitable for use with the latest American fighter aircraft equipped with internal ammunition compartments. A rocket with an active radar head is able to quickly and reliably find a target after the aircraft’s exit of the aircraft. In the case of using an infrared homing head, launching from the inside of the fighter's compartment can reduce effectiveness. The fact is that before launching modern missiles with ICGSN need to pre-capture the target. Carrying out this operation after launch does not currently provide the required reliability of search and target acquisition.

Overall dimensions of CUDA amid AMRAAM 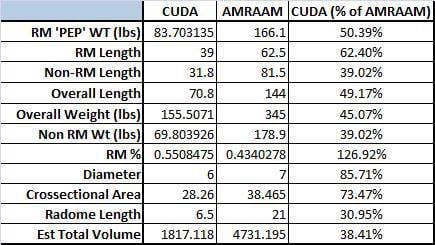 The flight qualities of the new air-to-air missile are still classified. Based on the available information about the method of intercepting goals, you can make approximate assumptions. To destroy modern and future aerodynamic targets, a CUDA rocket must accelerate to a speed of at least 2M. In addition, kinetic interception implies high maneuverability with high resistance to longitudinal overloads.

The adoption of a new CUDA missile will undoubtedly noticeably raise the combat potential of the US air force in a close missile battle. So, in the photo from Air Force Magazine magazine, the mock-up of the F-35 fighter "carried" the 12 CUDA missiles right away. It is too early to say exactly how it will be possible to combine the armament of these aircraft, but nothing prevents to build assumptions on this subject. For example, an F-35 aircraft can carry four AIM-120 AMRAAM and CUDA missiles only in the internal compartments. Such a composition of weapons allows the fighter to carry out interception of targets at small and medium distances with sufficient effectiveness. In addition, if necessary, it is possible to use external suspension units, which increases the number of several types of missiles ready for use.

The main combat work of CUDA missiles will be the attack of aerodynamic targets that are at a short distance from the fighter. At the same time, according to some rumors, the aircraft carriers of these missiles will receive a tool for the destruction of foreign ammunition. There is a version according to which a CUDA rocket can attack and destroy ground-to-air ammunition. It is unlikely that such an application of missiles is expedient and makes sense. The speed of modern anti-aircraft ammunition is such that CUDA may simply not have time to complete the necessary maneuver and destroy the enemy missile when confronted with it. Nevertheless, it cannot be ruled out that Lockheed Martin experts did not consider the issue of such a use of a promising rocket. 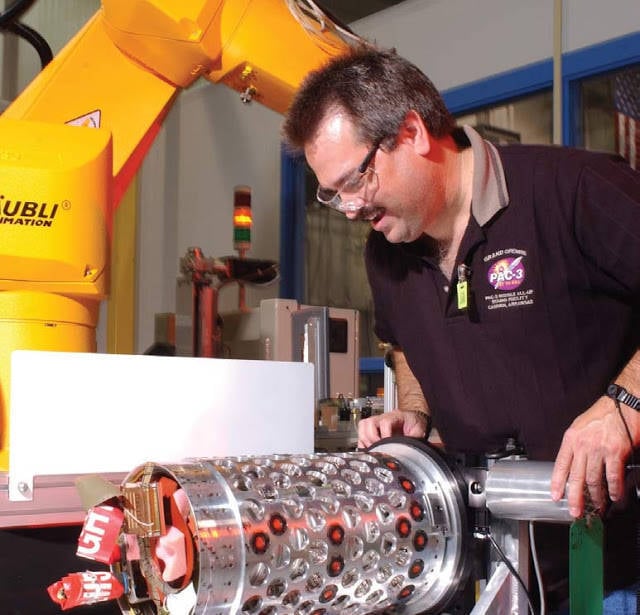 As we can see, despite the laconism of the development company, there is already an opportunity to get an idea of ​​the new rocket for modern American fighters. Do not forget that all these are only assumptions and the actual appearance of the CUDA rocket may differ significantly from them. Regardless of the correctness of those or other assumptions, we can confidently say that the new project, due to some of the declared features of the future rocket, may become one of the most difficult in stories by Lockheed Martin. In order to achieve high rocket performance, it is necessary to create several complex systems at once that will exceed the capabilities of modern equipment in their capabilities. If the CUDA project is crowned with success, then the US Air Force in the foreseeable future will be able to expand the range of its weapons and increase the combat potential, at least with respect to the quantitative aspects of the fighter’s ammunition assembly.