February 21 2011
3
In the United States, work has begun on the creation of a protective helmet, which is very similar to the props of the movie “Star Wars”, and are engaged in designing exoskeletons that are able to increase a person’s strength, making it virtually a “robocop”. According to experts, the soldiers of the XXI century, who donned armor, which are now being developed for him, will completely lose human traits, and he will have to think less, computers will do a lot for him. In fact, such a "star infantryman" will have only one function - the opening of fire by order, using the specified enemy as a target. But all this is theory, and what
will be in reality?

Infantry helmet in the spirit of "Star Wars" is good, but in the Hollywood blockbuster mentioned, it was not these stormtroopers who won, but brave and just Jedi, whose ammunition was ordinary clothing Belt, comfortable pants and boots. It seems surprising, but a military uniform a thousand years ago was much more functional than even at the beginning of the 20th century.

We used to dress in such a way that it was convenient to fight and work. A wide belt served to protect the belly and spine of a warrior, it was more convenient to walk on horseback in boots, and a short dagger was placed on the boots, which was later called a knife. Before the battle, over the top of his shirt, he wore a coat of mail or any other protection that protected the warrior from the piercing-cutting weapons the enemy. Then everything depended on the martial art of a particular person, it is worth saying that our glorious ancestors owned it perfectly. It’s a paradox, but the outfits of the squad of Grand Duke Dmitry Donskoy looked more optimal than the military uniform of the armies encountered on the Borodino field. And they fought on the Kulikovo Field in a contact maneuver battle, while at Borodino, soldiers and officers spent many hours standing in dense "boxes" or, moving forward, or dying in beautiful square. Yes, they were dressed in a European-style uniforms, but often suffered meaningless losses.

At the same time, it is even more paradoxical that the global trend in the development of military uniforms for centuries was one - inconvenient, but beautiful. Even now, in the new millennium, the conviction will remain that the uniform for fashion officers and soldiers can be designed only by fashionable couturiers, and not at all by those people who realize that the uniform should be first of all convenient for combat, and not beautiful.

But common sense gradually takes its toll. In the countries most militarily developed, military uniform is undergoing qualitative changes. Yes, of course, the parade uniforms will not disappear anywhere, in which it will not be a shame to appear outside the garrison, just as the field uniform will remain, on which the new combat ammunition will be put on. And our army will still have to abandon the beautiful form proposed by Yudashkin, who at the same time could not endure the harsh Russian winter.

The future clothing of a NATO soldier will be very functional, its hallmark will be that you can put on any modern armor that can be very diverse over it. So in the new American helmet it is planned to implement first of all protection against damaging factors in the form of such effects as the undermining of a partisan landmine. It is expected that it will be possible to achieve that the impact of the shock wave will not be transmitted to the eardrum, there will be no concussion. The helmet will be packed with computer and radio equipment to the maximum. Without removing the helmet, the soldier will be able to track their coordinates on the battlefield, receive commands and target designation. It is not excluded that filters will be installed in the helmet, which will give it the properties of a gas mask.

If it speaks of the so-called exosklete, which is now used in loading and unloading, it will become even more powerful and ergonomic, but most importantly, easier. In the exoskeleton, a soldier will be able to move around the battlefield with a heavy load over his shoulders, jumping over mine-dangerous areas, quickly climbing up hills or tall buildings. The developers of these technical innovations assure that they will be primarily needed during anti-terrorist operations, but the army is always created not to fight the partisans, but primarily to counteract the enemy’s regular units.

The fact that the soldier in combat conditions should be protected as much as possible, the Americans understood during the Vietnam War, they finally understood this after the end of the military operations of the USSR in Afghanistan. The US Army, which stepped into a series of local conflicts of the twentieth century, was completely different from the times of the shameful withdrawal from Southeast Asia. The uniform and ammunition of an American soldier who landed in the Persian Gulf in the 1990s was different from the one in which the expeditionary force in Vietnam was dressed, like a supersonic pilot’s suit aviation from the uniform of the pilot of the First World War.

In the near future, the protection of soldiers will become even more universal and durable. The back and chest of the fighter will be covered with rigid titanium or ceramic platinum that can withstand not only a rifle bullet, but also extinguish the blast wave. The side parts of the body, legs and arms will be covered with flexible synthetic bullet-proof pads.

Currently, Kevlar is used as synthetic armor. However, it is likely that in the near future he will be replaced by polyethylene. As it turned out, this well-known polymer, produced with nano-additives, becomes the owner of surprising properties: it becomes more resistant to external factors than Kevlar. At the same time, the softness of polyethylene ensures the absence of a traumatic effect, which is inherent in modern body armor. Thus, a bullet may not pierce a bulletproof vest, but the body of a soldier receives a dynamic blow of such force, which sometimes leads to rupture of internal organs, which can lead to his death. It is clear that when using polyethylene is excluded. Moreover, this material is lighter than water. In this case, the body armor will be able to perform the function of a life jacket, which is very important for crews of warships and marines. Perhaps it is polyethylene will become a kind of multifunctional armor of the future.

Our armor for the soldier

NATO has long been actively engaged in promising protection for its soldiers. And each of the countries is trying to bring something of their own. While in the leaders of France and the United States. In these countries, the creation of real combat complexes for those who have to fight on the ground. Everything described above is developed in the USA. But the great fame was received by the French ammunition FELIN. It is much less exotic in comparison with what is being developed in the United States by order of the Pentagon, but at the same time it is no less functional. And what happens in our country?

This may seem strange, but in many areas of providing protection and creating a convenient form, we were not so long ago among the world leaders, and even today not all positions are lost. A new outfit of a soldier of the Russian army is not those beautiful uniforms that are shown to the military and civilian public on the catwalks. This is a complex of protection, navigation and communications that meets all the basic requirements of a modern battlefield. 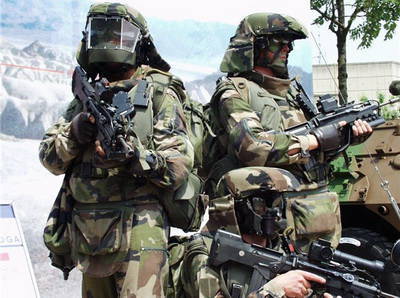 French outfit FELIN
Work on the creation of fundamentally new forms of protection and defeat began in our country in the 80-s of the XX century. The work was carried out at the Central Research Institute of Precision Engineering in the city of Klimovsk. Behind this little speaking abbreviation hides one of the world's leading manufacturers of equipment and small arms. This research institute is well aware of how to protect soldiers on the battlefield.

At one time, the implementation of the concept of “soldiers as a combat system” was first launched in Russia, and not in NATO countries. In our country, an interconnected complex of protection, life support, control and even power supply of a single soldier was designed. In the developed domestic complex, a sensor-transmitter was provided, which gave signals about the vital parameters of the human body. Suppose, after the end of a hard battle, you could immediately determine which of the soldiers was alive, and who needed help, and where the wounded soldier was.

In appearance, our promising outfit looks even more aesthetically pleasing than the massive one that the poster soldier of the American army is wearing. Almost now it is in no way inferior to the famous French kit FELIN, except in price.

The protection of the domestic soldier, as in most Western models, is combined and differentiated. All vital organs are covered with light titanium armor, which is able to withstand the hit of an automatic bullet. Synthetic protection is also widely used. In place of the usual helmet helmets come in a very different design: titanium, composite, composite or steel. Our helmets are less exotic, as promising American, but also save their ears from barotrauma, and the brain from concussion.

Unfortunately, bullet-proof polyethylene is currently unavailable for Russia, primarily in technological terms. However, already now the bulletproof vest for the Russian Navy simultaneously performs the function of a life jacket. If a sailor carrying a watch demanding wearing a bulletproof vest turns out to be in the water, he will not drown, but will float on the surface like a float. This development is a domestic know-how.

Mandatory for the Russian soldier of the future and personal navigation and communications. Each soldier departing for the mission must have a personal radio device and a receiver of GLONASS satellite navigation. This set of uniforms has already been recommended for use, it is hoped that it will begin to enter the troops in the near future.