“If we do not engage in politics, we will remain without schools” 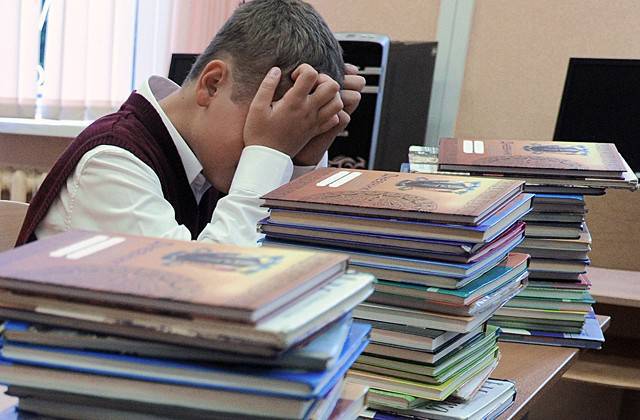 The teachers summed up the first results of the work on the new law “On Education”: there are more minuses than pluses


1 September 2013 of the year came into force the law "On Education". The problems of Moscow schools in the context of the new legislation were discussed on Wednesday at the Independent Press Center by teachers and parents of schoolchildren. The burden on teachers is growing, there is not enough money, correctional schools are gradually left without speech therapists and neuropsychologists, and ordinary ones without librarians and part-time teachers.

“This law is one of the most liberal and free laws on education, it gave free rein to regional authorities and removed all responsibility from the federal government. Now we are completely dependent on the wishes of the regional and municipal authorities, ”the teacher and a member of the board of the Teacher trade union Vsevolod Lukhovitsky began.

According to Lukhovitsky, many important provisions are not fixed in the law. So, it says nothing about the duty of the authorities to provide free additional education. Much is also unclear in the matter of financing schools and remunerating teachers. “Teaching salary should be average for the region, because of this, the average workload for the teacher is now one and a half rates. The administration squeezes librarians, psychologists and social workers from work, dismisses part-time workers. It is not profitable for schools to invite candidates of science from higher educational institutions so that they teach interesting subjects, ”the teacher resents.

As a result, teachers are forced to take more work, while being completely dependent on the administration, which, in turn, is controlled by the department of education. “According to the law, the department appoints school principals,” says Lukhovitsky, “and he can dismiss them at any time, without explaining the reasons for not justifying the trust.”

Another problem, according to the teacher, is the so-called effective contract. This refers to a temporary agreement with the teacher, in the text of which there can be literally anything.

"I saw this point with my own eyes:" The teacher undertakes to prepare for the EGE with at least 75 points from 100 in his subject. " That is, if a student scores a 74 score, then this could be a reason for dismissal, ”says the union representative.

In addition, teachers may face new challenges due to Russia's accession to the WTO, as it provides for the introduction of professional standards. “I saw a squeeze out of the draft professional standard. According to him, the teacher is a supergeny who does not understand where he studied and where it works incomprehensibly, ”says Lukhovitsky. The document states that a teacher should teach in an inclusive classroom, in which ordinary children, children with cerebral palsy, deviant behavior, children-athletes, children with certain creative inclinations, and any others can learn at the same time. “The standard is supergeny. None of the working teachers meets this standard, ”the union representative concludes.

Inclusive education has become a problem for parents of children with disabilities. “It is wonderful that the department wants to include children with disabilities in the society. Only neither the society nor the teaching staff are ready for this, ”says Elena Bagaradnikova, executive director of the Contact Center. Such children cannot study in ordinary schools, since many of them need small-sized classes with correctional support. But since the teacher’s salary now directly depends on the number of students in a class, experienced cadres are leaving, and the remaining teachers are increasing the workload.

“No one knows how to deal with these children in ordinary schools, we cannot switch to inclusion,” Bagaradnikova said. - In addition, the four hours of the free correction have now been cut twice, and this can only be done during non-teaching time. This is impossible without a prodlenki, and prodlenka paid. We do not know what to do. ”

“Since this year, it has become difficult to arrange for children with temporary registration in educational institutions. These are the children of migrants and the children of Russian citizens who have moved here to work. Financing falls into the 83 entity, and Moscow does not want to pay for other people's children, ”says Marina Ozhegova, head of the Association for the Protection of Family, Parents and Children. A possible way out of the current situation in the association is to create special policies, similar to medical ones, that could allow children to study in any subject of the country.

“If we do not engage in politics, then we will remain in the new building without polyclinics, schools and kindergartens. And in a couple of years we will start having problems with heating, ”concluded Grigory Kolyutsky, a teacher and organizer of a scientific and educational column at mass protests. - In the country, the economic crisis, and will save at all. Who will not shout loudly - will be left without money at all ".

The law “On Education” that came into force in the new school year has been developed for more than five years. 29 December he was signed by Vladimir Putin. The law describes the structure of education, ranging from kindergarten to postgraduate vocational education, and introduced a new system of financing institutions. Also, the document establishes the mandatory final certification for ninth-graders (GIA), extends the results of the USE to five years, introduces a mandatory school uniform, defines a special status for teachers and establishes that the teacher’s salary should not be lower than the average for the region. In kindergartens, the functions of education and child care are separated, and schools can receive income and independently manage them. Special attention in the law is given to children with disabilities - in particular, if possible, they should now study in ordinary schools. Critics of the law say that it greatly reduces the social obligations of the state.

Ctrl Enter
Noticed oshЫbku Highlight text and press. Ctrl + Enter
We are
15 comments
Information
Dear reader, to leave comments on the publication, you must to register.