There are no politicians in the USA, there are pathetic clowns! 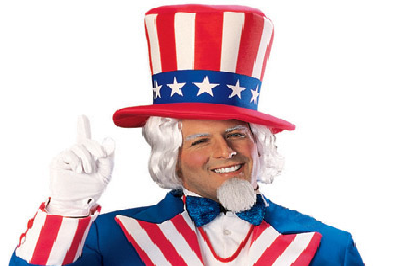 In the United States began another concert with the raising of the "ceiling". If these pathetic little people, who consider themselves the conscience and honor of a nation, knew with what contempt and feeling of abomination ordinary citizens look at them, they probably would never have put themselves in such a position.


America has never been such a hopeless ridicule in the eyes of the whole world, and never before have American citizens hated their chosen ones more than they do now. Today, one of the colleagues from Europe prodded the author with his nose, mocking American exclusivity, there’s simply nowhere else to go.

Frankly speaking, all these politicians are bored to hell. From their nonsense and dull bravado even the most patriotic Americans fall. Those who have always talked with inspiration about American power, now only evil spit. I remember a case in which an American farmer said in an interview to one of the channels: “I don't give a damn who sits in the White House, I’m only sure that the government will force Russians to buy American chicken.”

Less than 15 years have passed since then, and this farmer is no longer alive, it seems that he has committed suicide. All this well illustrates what is happening in America. By the way, the suicides of farmers are inferior in number only to suicides among military personnel. None of the legislators attended to the fate of farmers or wounded soldiers, who sometimes lie on mattresses soaked with urine, but everyone cares about Assad, and everyone is an expert on Syria. It must be said that this was not always the case. Previously, America did not care at all, the order should be in their own country. However, it seems that for some time now this is all already deep. история. Now the United States has a deal that the devil knows to whom, but to himself - last of all.

It seems that something happened to the United States, but no one noticed. But the answer lies on the surface, and a similar case in the new history has already been. Remember what happened to the USSR. The USA then very competently dragged the USSR into the war in Afghanistan and at some point they brought down the price of oil. The largest country in the world turned out to be a bankrupt country. However, the story is not over. For the United States, competing with the USSR in an arms race was not at all an easy one. I must say that the USSR almost won the race. Feeling that the country under his leadership is losing, Ronald Reagan allowed financial derivatives for banks, raised interest rates on income from US debt. Money all over the world rushed to America, it saved the US reputation from the shame of defeat. It must be said that under Reagan, a situation similar to today’s happened 8 times! Someone still considers "Reaganomics" the heyday of the US economy?

Agree, only the USSR could enter the race against the money of the whole world. Any other country would collapse in the second week. However, that was not the end of it. It was then that began the process that today "catching up" the United States from the past. The USA had no other way out. Either lose the race, or go into debt to the ears. It must be said that in the most difficult years, expenditures on the US defense budget amounted to 50%. This is a huge amount, in fact, showed the ineffectiveness of the American economy. The USSR dealt with these expenses on its own, while the United States had to go into debt. Mr. Brzezinski organized this "Afghan layout". Readers who visit us are constantly familiar with this material. For newbies, I also inform you that the unknown Mr. Robert Gates, the future head of the CIA (1991-1993) and the Minister of Defense of the USA (2006-2011), then went to Brzezinski's apprentices.

Since then, much has changed. In Russia, as they say on this site, Putin “happened”. He turned out to be a very talented student and immediately got down to business. The task was simple to formulate, but extremely difficult to complete. It was necessary to wait until the United States was drawn into the war, and better, in several wars, and to ensure high prices for hydrocarbons. As a result, the United States was drawn into several long-term and devastating wars at once, and, with the help of opening the theft of Khodorkovsky and denouncing the production-sharing agreement, Putin succeeded in driving hydrocarbon prices under the ceiling.

This is exactly the same as Brzezinski did, only with the opposite sign. Previously, the USSR fought, now America had to fight. Previously, hydrocarbon prices ruined the USSR, now they are ruining the United States. Previously, it ended in a default for the USSR, now the United States formally happened. Here, as they say, appreciate the beauty of the game. Interestingly, congressmen behave like retreating White Guards or Germans in films. One colleague says that he interviewed one Republican, and from that he was pretty drunk, and this is not an isolated case.

Despite the similarity of reasons, there is still one very significant difference. The United States has been and remains an international aggressor, while Russia today looks like an absolutely fair and peaceful state. Putin is practically impossible to object. Even the opposition bloomed because of an invitation to Valdai. However, not everything is so cloudless. So, for example, Sergei Shoigu did not press the hand extended to him by Ryzhkov. Every cricket know your hearth.

Losses for the United States are not over. As you know, McFaul completely failed his mission, he is now sitting quietly and does not seem to get a nose from Spaso House. However, for our readers this is no discovery. Surely there are old-timers on our site who read the article "Michael McFaul. Crash before take-off." This is a completely natural result. Most recently, we heard a discouraged interview with another “great friend of Russia,” John McCain. They say he is disappointed with the toothless UN Security Council resolution on Syria. And what did he actually count on?

When in the politics, like a friend of John, then victories in the confrontation with Putin can not be. Putin’s invincibility is explained by his great and invincible ally - the truth! Even ten McCains and thirty McFaus will not be able to defeat the truth, because they profess a lie. Putin only has to open this lie, which he does with pleasure. Remember: "It is very unpleasant and surprising to me that we talk to them (with the Americans) and assume that they are decent people, but he lies and knows that he lies. This is sad." Agree, rebuke as a blow with a whip. But what next? And then the "liar" was forced to refuse to go to Russia.

As a result, Kerry’s mission as Secretary of State was unfulfilled. That is, the worker was lousy, unqualified. This is not the first case. Before him, it was Secretary of State Hillary Clinton, this one also was that gift. Before her was Condoleezza Rice. As a matter of fact, wherever you go, candidates are suitable for delivering pizza and nothing more. Where, then, is the result? The current congressmen and senators are also no better than State Department employees.

John Beyner and Eric Cantor, two “goose from one brazier”, are not the first time trying to bend Obama precisely on the topic of raising the national debt ceiling. Mr. Cantor, who comes from a family of Romanian Jews, is terribly angry at Obama and in every possible way tries to subordinate him, to which Obama once reacted very calmly. This episode happened on the discussion of ways out of the crisis. On the third day after Obama’s inauguration in 2009, Cantor fussed and was verbose in Jewish terms. He insisted on the economic plan of the Republicans.

However, those who read us all the time know that Obama does not vote for the Jews. He prefers voices Latino. When Kantor got tired of him, Obama calmly declared to him: “It is worth making certain conclusions from the elections. And you know, Eric, I won them.” Obama slapped a loud slap to his fussy opponent without even raising his voice. At that time, many people understood that the President of the United States has a special talent of a speaker, who, probably, no other politician of the United States has.

This is not a praise of Obama, but rather a statement of the absence of literate, subtle and intelligent politicians in the US establishment. The fact that today the fairground is again in motion with the raising of the public debt only says that the Republicans have not become smarter and are trying to earn a reputation on the scandal. Of course, drunken shopkeepers in Romania did it this way, but why should drunken US lawmakers do it? This is a question of attitude towards voters.

Mr. Kantor believes that the US voters are so stupid that they need some kind of squabbling, and better, dog fighting or cockroach races where they could show themselves. Instead of conducting attentive legislative work for the sake of their homeland, the Republicans brought another booth for the play of those near at hand, which is clearly detrimental to the country. However, the worst thing is that if at the next election Kantor is elected again, it means that he turned out to be right and that the citizens need only a farce. It is precisely this example that demonstrates the depravity of the American elections, the illness of the American society, and all that these diseases lead to.