October 4 2013
59
Before the "shutdown" of the US government, which happened on 1 in October, one high-ranking officer from the Pentagon stated publicly that the cessation of funding for the state apparatus in the United States would be "another blow to the morale of the military and civilian contingent", which is "rather low". It was necessary, just in case, to explain to the general public that Defense Minister Chuck Hagel had the confidence of the people at the level of "from 70 percent and higher." This is what happens? And the fact that the American people are so stupid that they trust those who have low morale - and this spirit is about to become even lower. It seems to us that an unnamed Mr is right, and not a retired sergeant at all, but now millionaire and defense minister Hagel. After all, the US military, prescribed on bases all over the planet, continue to drink, thrash, sell drugs, brawl, use fists and knives, rape women, men and children. And it’s somehow strange to blame the economic crisis or the inability of Republicans and Democrats in Congress to agree on a budget. 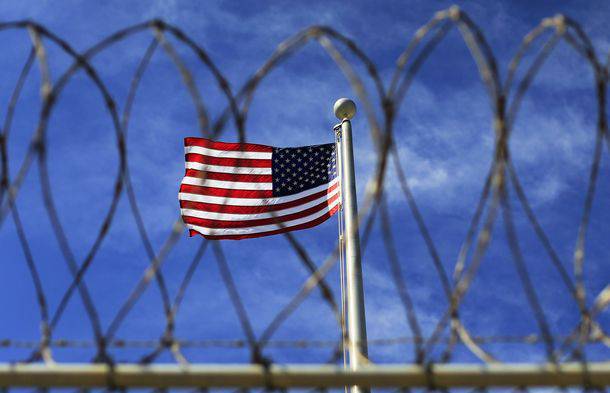 Channel "RT" notes that due to the budget collapse 1,4 million soldiers will not lose their jobs, but will remain without salary. The same sad fate awaits about 800 thousands of civil servants who work for the benefit of the Pentagon. According to FrancePress, in connection with this, one of the highest ranks of the Pentagon stated that the cessation of funding for the state apparatus would be "another blow to the fighting spirit of the military and civilian contingent", which is "rather low".

Americans lose confidence in the country's institutions of power. This was recognized in an interview with journalists, Defense Minister Chuck Hagel, reports the correspondent. ITAR-TASS Andrey Shitov.

True, the Pentagon chief said that the US armed forces are trusted by the people - at the level of "from 70 percent and above." “But all the others have record lows,” he noted for comparison.

Where would the people’s trust come from, Mr. Hagel? Especially against the background of the 2012-2013 scandals, due to which the adjective “combat”, which in military lexicon usually goes idiomatic couple to the noun “spirit”, did the press replace for a long time with “sexual”?

Let's go over the recent scandals that have shaken the army that the Americans so trust.

Last year, brigadier general Sinclair distinguished himself with massive sexual predilections. In May, 2012 rushed him send from Afghanistan to their homeland, where they filed a number of accusations: in repeated violence, and in sodomy, and in illegal sexual behavior, as well as other sex crimes, the victims of which were usually women - subordinates of Jeffrey A. Sinclair. The most significant were the rape charges of five women, of which four were subordinates of the general. In addition, Sinclair threatened the death of one of the victims, trying to make her silent. Not a general, but a duke from Marquis de Sade's novel 120 days of Sodom. This commander was caught on the little things - illegal possession of alcohol and pornography. He also became famous for not following orders from his superiors. What kind of "morale" is there?

In early August, 2012, two US Air Force instructors were convicted sexual abuse case at the Lackland Air Base military training center in San Antonio, Texas. Their victims were at least 38 listeners, but only in the case was passing 15 instructors are violent. In total, about half a thousand teachers work at the base. US Air Force Sergeant Louis Walker was in charge of the case. A court martial accused him of numerous rapes and sexual harassment under aggravating circumstances. Rape this Mr. preferred female recruits.

While the scandal with instructors inflamed, the US Department of Defense promulgated another report, where it was said that over the past 12 months, 4,4% of female military have been victims of unwanted sexual harassment. Many affected women believe that this figure is extremely undervalued.

According to the channel information Al Jazeera, only for 2011 a year about 3200 rape and sexual harassment was officially registered in the US military. At the same time, the Pentagon had to admit that this number was only 15% of all incidents.

A military study found that one in five women in the US military was sexually abused, but most of them do not report it. Nearly half of the respondents stated that they "do not want to create problems."

One former army nurse told a member of the US Congress that during her stay in Iraq and Afghanistan, she was more afraid of attacking fellow soldiers than attacking the enemy ...

And women do not necessarily suffer. In 2010, about 50 thousands (!) Of male veterans confirmed their “military sexual injury”. They reported this to the US Department of Veterans Affairs.

In mid-October, 2012, two brave American marines, pumped up alcohol on the waterline, raped a girl in Okinawa, for which were arrested by the police.

In August of the same year on the same Okinawa was taken into custody a US Marine sergeant for attacking a local woman.

2 November 2012 - again on Okinawa - a young American military pilot sat in a bar and succumbed. Already in the morning, pumping up to the clouding of reason, 24-year-old Mr. went up to the third floor of the hotel and burst into a room located above the bar. The pilot dragged the 13-year-old boy into the room, hit him, then he broke the TV and siganul out the window. The Japanese wrote a complaint to the flyer through the Ministry of Foreign Affairs.

American rapists are almost all alcoholics. They have not fighting spirit, but fighting alcoholism.

According to a report by the Medical Institute of the National Academy of Sciences of the USA, about 20% of all US military personnel abused alcohol. Almost half of the personnel of the Armed Forces and the Navy regularly pumped alcohol. During one visit to the bar, the infantrymen and sailors drink more than five bottles of beer or five glasses of strong alcohol.

Most drunkards serve in army units and marines in Iraq and Afghanistan. Among marines, there are especially many alcoholics: their number approaches 60%.

And what do you want? .. The democracy that Americans build in Afghanistan or Iraq is so terrible that you have to look at it through the glass of a bottle. In the first five glasses, the infantryman accepts the next five, and the belief in Mr. Jefferson’s ideals is strengthened in him ...

According to other data, from 20 to 35% of US Army soldiers not only abuse alcohol, but also take narcotic and psychotropic substances. "Heavy drinking" is typical for 20 percent of all soldiers of the ground forces, the National Guard and the reserve. According to the terminology of US narcologists, "heavy" alcoholics drink at least 200 grams of hard liquor every day. Binge drinking has increased in the US military over the past ten years from 35 to 47%.

In the newspaper "Work" recently published the latest "reports" from the US sexual fronts. The author of the material is Oleg Evseev ("Stringer Bureau of International Investigations").

Recorded rape of a six-year-old girl was found at private Joshua Klein. However, the command did not take the offender into custody and did not inform the victim’s mother. And the military pedophile again raped the child! Now a lawsuit of thirty million dollars has already been filed rather than against the rapist, but against the command, which pulled the case on the brakes, the journalist said.

Volunteers from the European and Pacific offices of the Stringer Bureau collected some evidence of offenses allowed by US soldiers at foreign military bases.

“They promised to teach me how to rap. In the hotel, they began to laugh at me and call me a whore. And when I was about to leave, they grabbed me. I began to scream, they hit me in the face and kept my mouth shut ... When I was left alone, I jumped out of the room and ran home. ”

In Japan, as noted in material like stories can tell dozens and hundreds of girls. But do not tell. For the Japanese, shame from the experienced humiliation is truly terrible. Many victims hide their rape all their lives. Satsuki's mother says:

“We learned about it completely by accident. When the daughter came home in tears, we did not ask her - we decided that this was another class conflict. It often happens with them, it even reaches fights. The terrible thing happened on Saturday when Satsuki was at school. Two men came to us - a policeman and an American, and they told what had happened. She went with the soldiers to the hotel, and after a while ran out in a torn jacket. This saw the hotel staff and called the police. When the door was opened, there were three drunken blacks in the room. We did not file an application so that the Japanese police would not be involved in the matter. If the neighbors find out about everything, it will be a shame for us for the rest of our lives. ”

Investigations of such cases are conducted by the American military police. And what? .. Documented 45000 incidents involving US soldiers in Japan, including fatal 512. Not a single case ended up in prison. And 40% of the accused did not even suffer an administrative penalty.

35 thousands of American soldiers serve in Japan, and 64 thousands in Germany. The US military is selling drugs here, taking advantage of the fact that they themselves and civilian personnel have been excluded from the operation of local laws.

With regard to sex, the American command since 1970-s has secretly allowed its valiant soldiers in Germany to use the services of German prostitutes. Red light district bloomed around the military bases. In the Electric Barbarella brothel, the author of the material writes, the prostitute Annette, at the mention of US bases, curses:

“Americans are bad - rude! But these are my main clients. ”

The other girl, Lina, did not have any incidents with “GI-A”, but her friend in a nearby brothel was not lucky: two American soldiers beat her cruelly. The American military police case was hushed up, and the German did not intervene. According to Lina, this happens all the time.

Only according to the Pentagon, in 2012, in the US Armed Forces 3374 cases of sexual violence were recorded. But an anonymous survey of a special commission revealed that in 9 of 10 cases, victims of violence did not report incidents. It turns out that last year 26 thousands of people became victims of violence in the US Armed Forces. 700 rapes are committed daily in the army.

“And all this is nominally the strongest army in the world. Army, armed with the most modern means of destruction. Army numbering 1,6 million personnel. An army that has 865 foreign military bases in 130 countries all over the planet (these are 95% of the total number of foreign bases in the world). Although in the light of the published data, it would be more correct to call them not military bases, but gangster nests, which need to be protected not from the outside, but from the inside. ”

So what did you say about high confidence in the army, Mr. Hagel?

Observed and translated by Oleg Chuvakin
- especially for topwar.ru
Ctrl Enter
Noticed oshЫbku Highlight text and press. Ctrl + Enter
We are
Memo to mercenaries in AfricaThe CIA and the Pentagon are awaiting new executives. Who are they?
Military Reviewin Yandex News
Military Reviewin Google News
59 comments
Information
Dear reader, to leave comments on the publication, you must sign in.