With the help of the local population 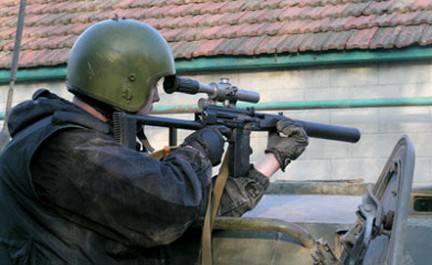 In a two-day confrontation of militants in the Levashinsky district of Dagestan, three policemen and three civilians were killed. However, it was possible to eliminate the participants of the gangs themselves, among whom was the leader of the local militants Zalimkhan Rabadanov. Crush the gang managed by the help of local residents.

Three policemen and three civilians were killed during a two-day skirmish with militants in the Levashinsky district, the backbone of the local gang was eliminated along with the leader.

“As a result of the counter-terrorist operation in the Levashinsky district, the battle core of the Levashin gang was destroyed. The preliminary identification of the identity of the dead militants established. They were natives of the villages of the Levashinsky district. Among them is Zalimkhan Rabadanov, born 1978, who was the leader of the gang, ”the website of the National Anti-Terrorism Committee (NAC) of Russia informs.

According to the ministry, five AKM assault rifles, a PSM pistol, a large amount of ammunition, medicines, foodstuffs, ammunition were found and seized at the scene of the incident.

“It was possible to stop criminal activity and prevent the commission of the planned“ Levashino ”gang by assisting local residents suffering from gang lawlessness. In the area of ​​KTO, further operational search and investigative actions are carried out, ”the committee added.

The NAC said that as a result of the shooting, three policemen and three civilians were killed. “The opposition to the militants began on October 1 in the afternoon. At 12.00, a group of armed persons was discovered by members of the people's militia team from among local residents and members of the district police department in a forest belt between the villages of Upper and Nizhnye Ubeki of the Levashinsky district. Having opened fire on vigilantes and law enforcement officers, the gangsters tried to escape, ”the statement reads.

Three civilians and three police officers were killed and four policemen and warriors were injured as a result of the arisen ammunition.

After receiving this information by the decision of the head of the Operational Headquarters of the NAC in the Republic of Dagestan, the legal regime of the counter-terrorist operation was introduced within the administrative boundaries of the Levashinsky District.

In addition, on Tuesday, the bomb was neutralized, the power of which is estimated to be TNT equivalent in 24 kg. “When carrying out road repair works in the city of Khasavyurt of the Republic of Dagestan, at the intersection of Shamil and Baranenko streets, workers discovered a suspicious object attached to a sewer manhole cover.

The bombers of the FSB of Russia identified the item as an improvised explosive device made of three trotyl drafts, a plastid with striking elements in the form of scrap steel, equipped with car alarms for remote control, ”reported NAK.

The head of Dagestan, Ramazan Abdulatipov, expressed condolences to the families of the victims. “All the dead and wounded for their courage and heroism will be presented to state awards. In addition, the families of the dead and wounded will be provided with appropriate material support, ”the RIA Dagestan press service told the press service of the President and the Government of the Republic of Dagestan.

Abdulatipov emphasized the fact that the residents of the Levashinsky district showed their determination to repel the bandits and were ready, with weapons in their hands, along with law enforcement agencies, to defend their native land.

“Today there is no region more affected by terrorism than Dagestan. Every day people die, widows and mothers mourn their loved ones, orphans remain children. Honest and decent Dagestanis can no longer tolerate what is happening in our republic. The situation is such that further remain indifferent to what is happening, we have no right. Dagestanis are obliged to express harsh rejection to any manifestations of destabilization of the situation in the republic. The land should burn under the feet of the bandits, and the most important thing is to make sure that these nonhumans do not meet the slightest chance for loyal attitude and all the more for any kind of support or help.

At the same time, I would like to note: the Russian state, the leadership of Dagestan and our security forces have enough forces and means to bring order to the republic. I ask the population not to resort to armed forms of struggle in order to avoid possible losses. But the state, society, more important is your support and uncompromising attitude towards extremism and terrorism. We are cleaning and updating Dagestan, we are determined to establish order, to ensure the rights and freedoms of Russian citizens in Dagestan, their well-being.

The Dagestan people are always with Russia, and especially at those moments when the fate of our entire multinational great country was decided. This is especially important to emphasize now, in the year of the celebration of the 200 anniversary of the entry of Dagestan into the Russian state. And no attempts to undermine this integrity, the withdrawal of Dagestan from the legal field of our country do not have a chance to be implemented, ”the head of the Republic of Dagestan stressed.

A veteran of the anti-terrorist group Alpha, Alexei Filatov, noted that “there are certain forces outside Russia who are not at ease in the North Caucasus.”

“This is especially disadvantageous in the conditions of the upcoming Winter Olympics - 2014 in Sochi. There are financial flows to the North Caucasus, which the militants have to work out, they should not reassure public opinion, especially world opinion, to constantly heat up the situation. There is no other way to explain the whole situation, ”Filatov told VIEW LOOK.

Ctrl Enter
Noticed oshЫbku Highlight text and press. Ctrl + Enter
We are
Results of anti-terrorist work on Dagestan in April 2014
26 comments
Information
Dear reader, to leave comments on the publication, you must to register.