US and South Korea will deter DPRK 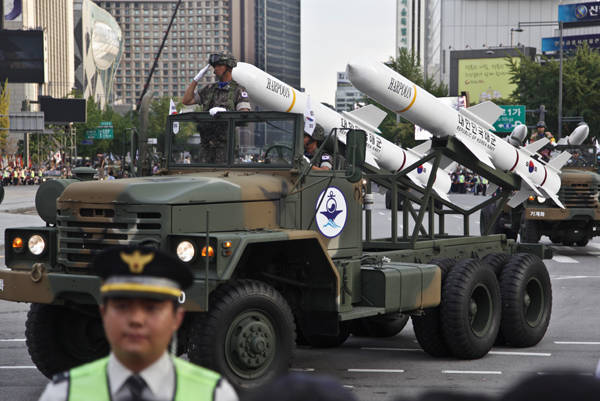 Today in Seoul, as part of the 45 meeting on security consultations between the United States and South Korea, talks were held between the heads of defense ministries of the two countries. Following the consultations, the parties signed a whole package of agreements aimed at strengthening the bilateral military alliance, as well as countering the threat from the DPRK.


Although some disagreements between the allies continue to remain, but in Seoul do not hide their satisfaction from the outcome of the negotiations: the United States promised "extended protection" to the South from nuclear weapons North. In addition, Washington actually satisfied the request of the southerners to postpone the transfer of command over the combined forces from the United States to South Korea in the event of a war. True, as some experts note, in exchange for this, the United States will now begin to push Seoul into joining the American system of a global missile defense system.

In principle, it was no secret to anyone that the current talks between the defense ministers of the United States and South Korea, as well as the chairmen of joint chiefs of staff committees (CEN) of the armed forces of the two countries will be of great importance both for the US-South Korean alliance and for the alignment of forces in the region. The fact that the head of the Pentagon, Chuck Hagel, spent four days in Korea, spoke about this. However, the main agreements were signed on the last day of the visit - October 2.

If we analyze what was going on in the negotiations, we can distinguish four main topics: the new Allies' response to the nuclear threat and other weapons of mass destruction (WMD) from the DPRK; missile defense theme; the question of the transfer of command; other aspects of cooperation, which had a working character.

Judging by the abundance of analytical broadcasts and extensive notes, the topic number 1 was still a threat from the DPRK, which greatly agitated Washington and Seoul after Pyongyang’s nuclear tests in February of this year, as well as a period of sharp tension in the first half of the year. Then, we recall, the Americans barely reassured their rather agitated South Korean allies, assuring that they would not abandon them and would eventually prepare their answer to all possible threats of the North. The result of this work was the Specialized Strategy for the Deterrence of the North Korean Nuclear and Other WMD Threat signed in October on 2.

In fact, this document has the character of a full-fledged manual on the use of weapons for neutralizing nuclear and other arsenals of the DPRK. Although the heads of the defense ministries of the two countries did not tire of referring to the "secret nature" of the agreement, the basic tenets of this plan became known. Immediately, attention was drawn to the fact that Washington and Seoul secured the right to launch a preemptive strike on the DPRK, "if reliable information is received about North Korea’s intention to use nuclear weapons or other types of weapons of mass destruction". At the same time, the head of the Pentagon assured the southerners that the United States, if necessary, would support its ally within the framework of the concept of an “extended nuclear umbrella”, using all the necessary forces and means for that. Seoul media immediately recalled that the United States had three main types of weapons for delivering nuclear strikes on the enemy: bombers capable of carrying nuclear weapons (B-2 invisible aircraft and B-52 "flying fortresses"), submarines with appropriate missiles and intercontinental nuclear missiles proper. It seems that the signed strategy determines when and what will be used.

At the same time, the threat itself from the DPRK is divided into three stages, within which various diplomatic and military methods of neutralizing it will be used: potential threat, the possibility of an early use of nuclear weapons, the stage when WMD was used by Pyongyang. Judging by the comments of the South Korean military, they are very pleased with the new "strategy", as well as what the head of the Pentagon promised them. "With the new agreements, we sent a clear signal to the North that, by developing its nuclear arsenals, it will not achieve the military and political dividends it hopes for," a senior South Korean defense official told reporters.

Seoul is not given the role of a passive observer. He will also take part in striking DPRK nuclear, missile and other objects using his new Khenmu-2, Khenmu-3 missiles, destroyers capabilities with Izhis combat information control systems, intelligence forces and so on.

By the way, this topic was touched on the day before by South Korean President Park Geun-hye, who spoke at a military parade on the 65 anniversary of the creation of the armed forces. He promised that by 2016, the South would create its own Kill Chain system, capable of destroying those DPRK objects that had attacked South Korea within 30 minutes, and by the beginning of 2020’s own air defense and missile defense system, known for under the abbreviation KAMD.

According to observers, behind all this, Washington’s desire to “connect” Seoul to the US global missile defense system is clearly visible. The official government of South Korea is still “holding on”, which is also promoted by the obviously negative reaction of China. But in the military circles of the South and in the expert community, there are more and more people who think that sooner or later South Korea will have to join the US missile defense system in one form or another. And this will significantly change the balance of forces in the region.

On the third agenda item of the negotiations, the South also managed to achieve concessions from the United States. According to media reports, Washington acknowledged that the transfer of command over the combined forces on the peninsula would be advisable to postpone to a later date, and not to the end of 2015 year, as it was until now. Let us clarify that so far, according to bilateral agreements, in the event of a war on the Korean Peninsula, the command over the troops of the South and the US contingent in Korea should be transferred to the Americans, whereas in peacetime the Koreans formally lead all.

However, several years ago, the Koreans insisted on the transfer of this command in the event of war. At first it was planned for the end of 2012 of the year, but then it was moved to December of 2015 of the year. Now the Koreans are backing down again, declaring that they are not yet ready for such responsibility, in effect asking the Americans to command in the event of hostilities. The United States has so far insisted that it is time to stop enduring the “inevitable”, but it seems that the South has managed to convince Washington that Seoul is not yet ready for this. The final decision will be made on this issue in the first half of next year. In the preliminary plan, the parties also predetermined the main outlines of the joint command structure after receiving full control of Seoul, but now it is already unclear when the South will finally “mature” for independent warfare. In any case, the United States seemed to have ceded here to the allies, which, in the first place, pleased the South Korean military, who spoke most loudly about their unpreparedness for new responsibility. But here, according to some experts, the topic of the US global missile defense has reappeared. According to some reports, in exchange for these concessions, the United States will now demand with renewed energy that the South join the US missile defense system, and it is becoming more and more difficult for Seoul to resist this pressure. According to a number of media reports, Seoul said that they would be ready to take over command when "they received sufficient means of deterring the DPRK." Representatives of the Pentagon immediately said happily to the allies that it was precisely global missile defense that was one of the best such means.

In addition, Seoul and Washington also signed agreements on cooperation in the field of cyber security and in the space sector. This means the intensification of the cooperation of allies in cyberspace, as well as more intensive interaction in terms of intelligence and data exchange on the DPRK.

As far as can be judged by the appearance of the head of the Pentagon, Chuck Hagel, he did not feel himself lost in the course of this round of "friendly battle with an ally." Although the media in the South relentlessly say that Seoul "got almost everything he wanted," it seems that the United States has not remained offended. It can be expected that sooner or later Seoul will start to do what Washington has long been seeking from him. For example, it concerns the same global missile defense system.

Independent South Korean experts meanwhile note that South Korea has to try to find a kind of compromise that would satisfy Washington, but wouldn’t understand Beijing, which, by the way, is Seoul’s main trade and economic partner.