European hyenas. To the 75-flight of the Munich Agreement 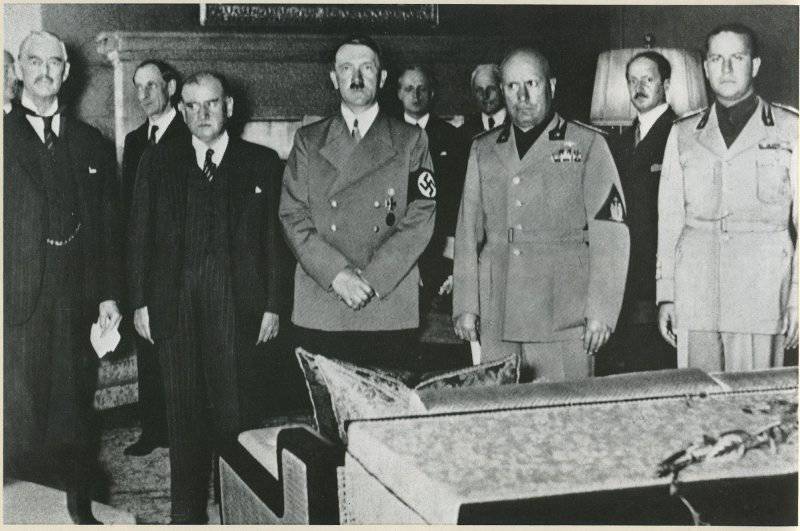 In the political calendar of the Western democracies, from time to time anniversaries of such events appear, which in London, Washington, Paris or Warsaw would prefer not to recall. One of them happened 75 years ago, 30 September 1938, when in Munich the prime ministers of Great Britain and France N. Chamberlain and E. Daladier put their signatures next to the signatures of A. Hitler and B. Mussolini under the agreement that Czechoslovakia gave to the slaughter . The United States supported the Munich deal ...


But still historical the memory of peoples is stronger than anyone's desire to erase, obscure this shameful page of Western diplomacy. Indeed, the Munich conspiracy must not be forgotten - because it was from him that the Second World War grew just a year later.

We turn over some pages of the history of 1938. Hitler decided to destroy Czechoslovakia in the spring of that year. In early April, he informed Mussolini that he intended to stop Germany moving towards the Mediterranean Sea and begin to solve the problems of the Sudetenland, where the majority of the population were ethnic Germans. In the Directive on the Grün Plan of 30 on May 1938, the Führer stated: "My firm decision is the destruction of Czechoslovakia through military action in the foreseeable future." At the direction of the chief of staff of the Supreme Command of the Wehrmacht V. Keitel, given to the commander in chief of the armed forces, the implementation of this directive was to be “ensured at the latest from October 1 to 1938.”

"Stopped" Hitler Neville Chamberlain. Showing literally touching concern that the military action did not cause international complications of the Third Reich, the British Prime Minister assured the interlocutor in his quest for “German-English rapprochement” and readiness at the 15 September meeting of 1938 with the Führer in Berchtesgaden (Germany) for the sake of this, recognize the inclusion of the Sudeto-German regions into Germany Undoubtedly, this untied the hands of Hitler, who could now have absolutely no fear that the desire to expand "living space" at the expense of Czechoslovak territory would be "not so" perceived by Western democracies. It was not by chance that during the re-meeting with Chamberlain in Godesberg, Hitler behaved in a businesslike manner: he demanded that all conditions be created for the occupation of the Sudeten no later than October October 1. And the British prime agreed. As an intermediary at a conference dedicated to solving the Sudeten problem, Great Britain chose the famous “peacemaker” - the Italian duce.

Having met on September 29 in Munich, Hitler, Mussolini, Chamberlain and Daladier, they ordered the government of Czechoslovakia to hand over to Germany about 75% of its territory within ten days. Czechoslovakia was losing a quarter of the population, about half of the heavy industry, powerful fortifications on the border with Germany, the new line of which now actually rested against the outskirts of Prague. The negative attitude to this dictatorship of the country's government was not taken into account, its representatives were not even deigned to be invited to Munich.

Thus, the coercion of Czechoslovakia was committed by the will of the Western democracies. But there was still the Soviet Union, which could have violated the plans of the Munich Four, because it was bound (as, by the way, France) by the 1935 agreement with Czechoslovakia. And although it was written in that agreement that in the event that assistance to the victim of the attack was provided by France (and France, as we see, betrayed Czechoslovakia), Moscow could decide to act unilaterally and still come out in defense of the Czechoslovakians. True, this required one more condition: for the Red Army to defend its contract partner, its troops had to cross Polish territory. But here Poland hastily hurried to the aid of London and Berlin. The Polish Ambassador to Paris, Y. Lukasevich, assured his colleague from the USA, W. Bullitt, that his country would immediately declare war on the Soviet Union if he tried to send troops through Polish territory to the borders of Czechoslovakia.

In Warsaw, they were already anticipating the future dismemberment of their neighbor, since the Poles themselves were eager to profit. Back in May, French Foreign Minister J. Bonnet told the Polish ambassador that the plan "on the division of Czechoslovakia between Germany and Hungary with the transfer of Teshensky Silesia to Poland is not a secret." Naive! .. In the above-mentioned telegram of Hitler addressed to Mussolini (recall - this is the beginning of April), among the immediate goals of Germany was the solution of the “problems” not only of the Sudetenland, but also of the “Polish corridor”. Absorption of the Polish territory, which separated East Prussia from the main territory of the Reich, one way or another would have turned into a war, which happened exactly one year later. But first enticed by the prospect of participation in the section of Czechoslovakia, and after 30 in September of 1938 and the exclusion of the Teshenskaya region (Teshenskaya Silesia) from it, the Poles did not notice the shadow of the imperial eagle with a swastika in its claws advancing from the west.

Europe's hyena, as W. Churchill called Poland non-diplomatically, was one of the first to regret her short-sightedness, becoming another victim of Nazi Germany in the world war that began on September 1 on September 1939. The following were France and the United Kingdom. But didn't they themselves in Munich give this war a green light?

We emphasize the most important features of the Munich Agreement: first, it was the agreed dictate of Germany and England (France and Italy followed in the wake of their partners); secondly, Hungary and Poland were complicit in the collusion and partition of Czechoslovakia: the latter occupied the Teshen region, and Hungary - the southern regions of Slovakia; thirdly, the Soviet Union was isolated. The measures he took in support of Czechoslovakia (concentration of troops on the western borders, diplomatic demarches) were not successful.

Britain and France hoped to pacify Germany at the cost of territorial concessions at the expense of Czechoslovakia, to divert the charge of its aggressive policy from itself. Soviet intelligence reported to Moscow that before the departure from Munich, Chamberlain again met with Hitler, who confidentially told the British prime minister: "We have enough planes to attack the USSR, especially since there is no longer any danger of basing Soviet planes on Czechoslovak airfields."

The Munich deal overnight destroyed with such difficulty the framework of the collective security system in Europe, which was based on the Soviet-French and Soviet-Czechoslovak treaties on mutual assistance. Having absorbed Czechoslovakia, Hitler, seeing perfectly well that no Western state or grouping of states is going to prevent him from territorial division, 3 on April 1939 gave a completely secret directive, which determined the time of the attack on Poland - 1 of September of the same year.

Under these conditions, the Soviet Union had no choice but, avoiding danger, to remain face to face with the possible united front of the Western powers, to go in August 1939 to sign a non-aggression treaty with Germany.

Today, by relieving themselves of the responsibility for “appeasing” Hitler, which resulted in a world conflagration, Western politicians and historians are trying to shift it onto other people's shoulders - to accuse the Soviet Union of provoking the Second World War. In fact, they still cannot forgive the Soviet leadership that, having completed a brilliant diplomatic maneuver, it slipped out of the trap set for the USSR and, thanks to the non-aggression treaty with Germany, avoided the prospect of war with the united forces of the West and left the Anglo-Saxons with the Wehrmacht the French, who, caressing Hitler, so strove to send him east.