Brazil and the irresistible Chinese march through Latin America 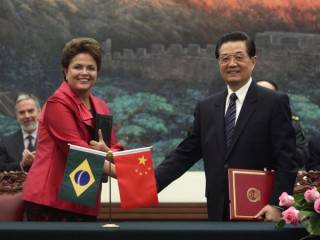 The conflict that has arisen between Brazil and the United States because of the espionage of the NSA, the CIA and other special services, highlighted the presence of deep crisis tendencies in the relations between the “single superpower” and Latin America. The provocation of wars in Africa and Asia to establish control over countries rich in hydrocarbon deposits, the initial successes of this aggressive strategy, the illusion of permissiveness caused a kind of dizziness in the leadership circles of the United States. The reliance on brute force led to a noticeable "stupidity" (no other definition!) Of Washington's foreign policy, the use of threats instead of constructive dialogue and balanced reasoning. Even external adherence to political correctness has become a useless anachronism for American diplomats.


This may explain the harsh reaction of Brazilian President Dilma Rousseff to the actual refusal of the Obama administration to apologize for the espionage activities in the country and to ensure that this will not happen in the future. For the Brazilian leadership, all attempts by Washington to get away from a concrete discussion of the problem are equivalent to the manifestation of imperial arrogance and hostility. If the Brazilians had any hopes for an “equal partnership” with the United States in the twenty-first century, it is now over with them. Theoretically, such a partnership could ensure that Washington maintains its position in South America. However, the Obama administration stupidly missed its chance and thus largely facilitated further penetration of non-regional powers into the continent.

Against the background of the Syrian failure, which revealed the dirty methods of Washington in organizing “humanitarian interventions,” the failure of the Obama administration in Brazil is not so noticeable, but for the countries of the Western Hemisphere it has a landmark character. Finally, the Brazilians have publicly demonstrated that they are dissatisfied with the hostile actions of the United States. Previously, difficult issues came down on the brakes, were solved at the insistence of Washington "through diplomatic channels," that is, indulged in oblivion. US diplomats and intelligence officers perceived the political correctness of the Brazilian leadership in principle for weakness and lack of political will. More than once, the Brazilian authorities (during the presidency of Inacio Lula da Silva) limited themselves to “moderate notations” even when they had evidence of the concrete subversive activities of the Americans. Suffice it to recall the operations of the US special services for the preparation of the rejection of Amazonia under the pretext of "preserving in the interests of mankind" strategic reserves of fresh water.

Against the backdrop of growing criticism in Brazilian society about the United States, President Dilma Rousseff is expanding relations with China, this time without a traditional regard for Washington’s possible reaction. China - one of the partners of Brazil in the framework of BRICS - skillfully uses the capabilities of this association to strengthen its position in the country. The Obama administration has no leverage to prevent this. All US resource capabilities are thrown to hold their positions in the oil-producing countries of Africa and Asia, to maintain pressure on Syria and Iran. The US is gradually losing political and economic influence in Latin America, and powerful competitors fill the void.

If we analyze the intensity of the visits of high-level Chinese leaders to the continent, then Beijing, of course, holds first place in this regard. As a rule, visits are well prepared, conclude with the signing of specific agreements and, most importantly, these agreements are consistently implemented. The Chinese at the turn of the millennium promised Latin America to implement a program of investment in the region's economy. The program is being successfully implemented - from Mexico to Chile, from Ecuador to the island states of the Caribbean. Without much advertising, step by step, the Chinese are mastering the region, demonstrating the effectiveness of their industry, space potential, technologies for the production of modern weapons and agriculture. The United States can only wage an increasingly noisy campaign to increase the "yellow threat" on the continent, but the Chinese almost do not react to it. They are confident in their abilities. And this is another proof that China has come to the Western Hemisphere, including the United States, for a long time, more correctly, to say forever.

Experts predict a further consolidation of Brazilian-Chinese relations. Dilma Rousseff seems to give a signal to other countries: now there are favorable conditions for leaving imperial care, searching for alternative development and cooperation without ultimatums and dictate. In Latin America, unions of states have been created - UNASUR, SELAC, ALBA and others, for which the fundamentally independent foreign policy and trade and economic course of Brazil will become the second birth. Previously, many decisions of these associations were taken with an eye to the position of Brazil, who does not want to aggravate relations with Washington. In particular, on the formation of the South American defense system. The need for it has matured. The United States will sooner or later be ousted from foreign territories, but they will oppose this with all their might. Is this why dozens of US military bases have already been created in Latin America?

Ctrl Enter
Noticed oshЫbku Highlight text and press. Ctrl + Enter
We are
Brazil: elections under pressure from the CIAHow the US uses surveillance and scandals to spread its global control (AlterNet, USA)
Military Reviewin Yandex News
Military Reviewin Google News
12 comments
Information
Dear reader, to leave comments on the publication, you must sign in.