Snipers go to a duel 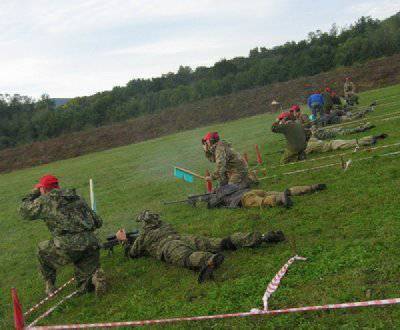 Every day the X International sniper competition pairs of special-purpose units, held in Kuban at Shapsugskaya station, was extremely saturated with the highest dynamics of competition in a wide range of exercises, reflecting almost all the specifics of sniper work. And although snipers - the people sustained and thorough, on the firing line a surge of emotions was becoming commonplace.


The exercise “Sniper Duel” did not leave indifferent neither spectators, nor participants, nor representatives of teams, but this stage of the competitions demanded the utmost precision and efficiency from the judges in evaluating every action of the shooters.

The essence of this exciting competition is that the two competing couples from a prone position start on command and rapidly run 25 meters to the firing line, charge weapon and again from a prone position they open fire. For each pair - two goals - plates with a diameter of about the head of the average terrorist, located at a distance of up to 300 meters. Only two cartridges per sniper, and they must be placed in different stores, which requires reloading weapons after each shot. If one of the numbers of the pair hits its target with the first shot, it can come to the aid of a partner. Time for shooting is limited to the defeat of the target, but not more than 1 minutes. Those who hit their targets faster will emerge victorious in this fight. In case none of the teams hit their targets in 60 seconds, a mutual defeat is declared. For each victory a sniper pair gets an 1 score. Places are determined by the highest amount of points scored in all dueling rounds.

This year, 42 teams arrived at the competition. Therefore, the panel of judges decided to divide the duel exercise into two stages: the semi-final and the final. Thus, only in the semi-final each sniper pair had to go to the starting line 20 times.

In the first run, applause from the audience was frustrated by Chinese snipers. Starting with a fast-paced sprint, they simultaneously lay down on the wet grass and literally after a couple of seconds they both hit their targets with a volley. No luck in this race troop pair of snipers from the motorized rifle brigade of the Southern Military District. Although they tried to equip their old SVDs with the bipods borrowed from their fellow rivals specially for the duel exercise, this did not add much stability to the weapon. And the standard deviation of the SVD bullet is, as you know, seven centimeters for every hundred meters.

During a duel, snipers - people, due to their professional specificity, are very balanced - cannot hold back their emotions. Crazy pace: start follows start. For some, the first bullet smashes the target to smithereens, and for someone, both of them fly into an unrecognized “milk”. The mood of the participants and representatives of the teams is changing, as the autumn weather in the foothills. Perhaps it was psychological stability that helped the team of Kazakhstan service "Airastan" to win this exciting and tense competition. The team from Essentuki in the final duels took second place, representatives of group “A” of the KGB of the Republic of Belarus took third place with a minimum margin. The best result among the teams representing the Ministry of Defense of the Russian Federation was the ninth place of the team No. 1 of the 92154 military unit. As the representative of this team noted, sniper instructor Gennady (he asked not to give his last name), the sniper duel will certainly be included in the competition of military sniper pairs, which will soon be held on the basis of one of the special forces units of the Western Military District.