October 3 2013
4
In 1960 years, the theme of spaceplanes was very popular. In various countries, these programs have evolved in many ways. One of them was the American program START - Spacecraft Technology and Advanced Re-entry Tests (Spacecraft Technologies and Advanced Repeat Tests). START was launched in August 1964 by the initiative of the US Air Force and incorporated the results of the X-15 and X-20 rocket-planes programs. In addition, work was done on studies of the entrance into the dense layers of the atmosphere of the head parts of ballistic missiles. The US military set a global goal - to combine previous developments and develop a space plane that can deliver a payload to Earth's orbit. Since the customers were naturally the military, the “payload” implied nuclear weapon.


By the year 1966 was ready to draft the experimental spaceplane SV-5D. The development of this unit was engaged in the Martin company Baltimore. The design of the case was quite original. Three vertical stabilizers were equipped with rudders. The spaceplane was a double cone with a flat bottom surface and a pair of short stabilizer wings, which are installed at a large angle. The third stabilizer was mounted at a right angle in the rear fuselage. The pitch was controlled by elevons, which were differentially related to control roll maneuvers. The design in the front of the fuselage is almost spherical. The weight of the models was 399-408 kg. Dimensions were also small: wingspan - 1,22 mm, length - 4,22 m. 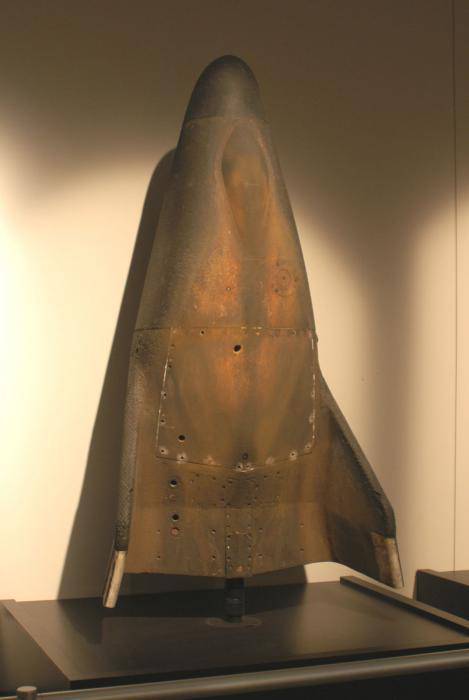 It was assumed that the SV-5D space planes would be launched by the carrier into orbit and, after the implementation of the flight task, would be self-descended with a “aircraft” landing. Having experience of flying on the modes of entry into the atmosphere, when the ablative protection is partially destroyed, and the control of the aerodynamic control surfaces loses its effectiveness, it was proposed to use jet nozzles.

At the first stage of testing, the SV-5D should have included only unmanned launches with a load of 0,5-0,9 tons. Simultaneously with the hypersonic tests, it was decided to conduct flight tests of the large manned SV-5D for controllability and stability on subsonic flight modes and for testing landing. 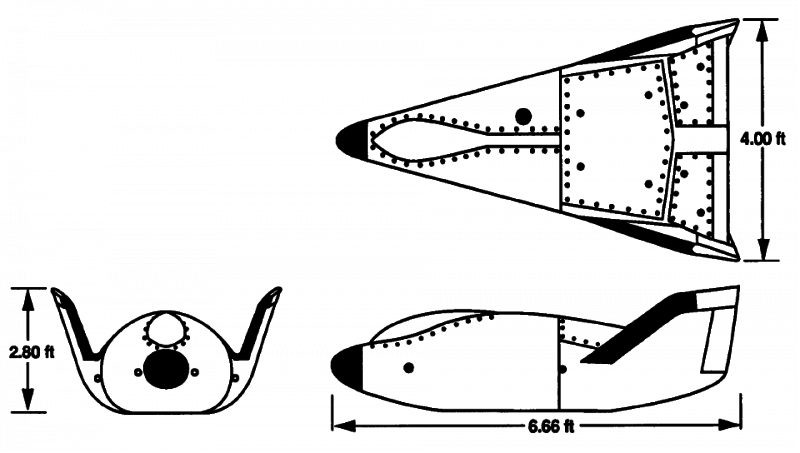 The first SV-5D prototype (also known as “Prime”) on the 21 December 1966 of the year was tested in an unmanned version. In fact, the car was a model for aerodynamic tests weighing 405 kg. The first start of the device ended in an accident. The spaceplane launched with the help of the Atlas launch vehicle SLV-3 along a suborbital ballistic trajectory collapsed into the ocean after entering the atmosphere. The device could not be saved. The cause of the disaster was not disclosed. The launch of the second unit, which took place on March 5, 1967, also ended in failure. Only the third unmanned model launched on April 19, previously strongly burned, landed in the estimated location. Despite this, the results were quite encouraging. The spaceplane, after separation from the carrier, reached the speed of 28157 km / h without any serious consequences. During the descent, at a height of 45000 feet, the speed decreased to M = 2, and the braking parachute opened. The SV-5D splashed down and was picked up by a C-130 transport plane.

While tests were conducted, the company Martin, on its own initiative, developed two more variants of the spaceplane - the SV-5J, equipped with an air-jet engine and the SV-5P - manned, designed for orbital flight. But, at the end of 1967, the START program has changed a lot, which was the reason for the change of symbols. As a result, SV-5D received the designation X-23, and the modified SV-5P was assigned the index X-24. An attempt was made to link the further development of the program with the design of the orbital station Manned Orbiting Laboratory (MOL), which was planned to be put into orbit in 1969 year.

The X-24 has undergone a number of improvements. Global changes were not worn. They were mainly associated with the improvement of equipment and aerodynamic qualities. The updated project was given the designation X-24A. Overall dimensions were: length - 7,5 meters, diameter - 4,2 meters. The flight mass was equal to 5192 kg of which the fuel accounted for 2480 kg. The fuel consisted of liquid oxygen and alcohol. The maximum thrust of the XLR-11 rocket engine mounted on the X-24 was 3845 kg. Continuous operation time - 225 seconds. 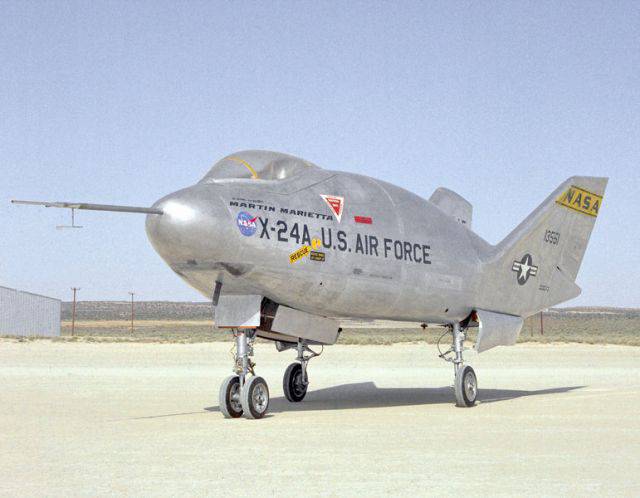 The X-24A spaceplane was a prototype ship - the Americans were not going to launch it into space. The aircraft was designed to study the possibilities of landing at high speeds from high altitudes and to study the characteristics of supersonic flights in the upper atmosphere. 17 April 1969, the first flight of the prototype rocket plane was made. The first flight with the inclusion of the engine carried 19 March 1970 g.

Like other winged vehicles equipped with rocket engines, the X-24A could not make an independent take-off. In this regard, the spaceplane was delivered to a predetermined height under the wing of a B-52 bomber. After dropping from the carrier, the pilot switched on the rocket engine and made an independent landing on the airfield. Despite its minimal number of protruding parts and the futuristic design of the X-24, only M = 1,6 could reach speed and reach the 21,8 km ceiling. These characteristics even for the prototype are quite modest.

Piloting the X-24A involved only three pilots: Jerold Gentry, John Menki and Cecil Powell. The spacecraft X-24A carried out 28 flights at AFFTC (US Air Force Flight Research Center) at aviation base Edwards, California. 18 flights were carried out with the start of the engine. The last flight was carried out on June 4, 1971. Further work on the SV-5 and its modernization was curtailed in favor of a more promising project. 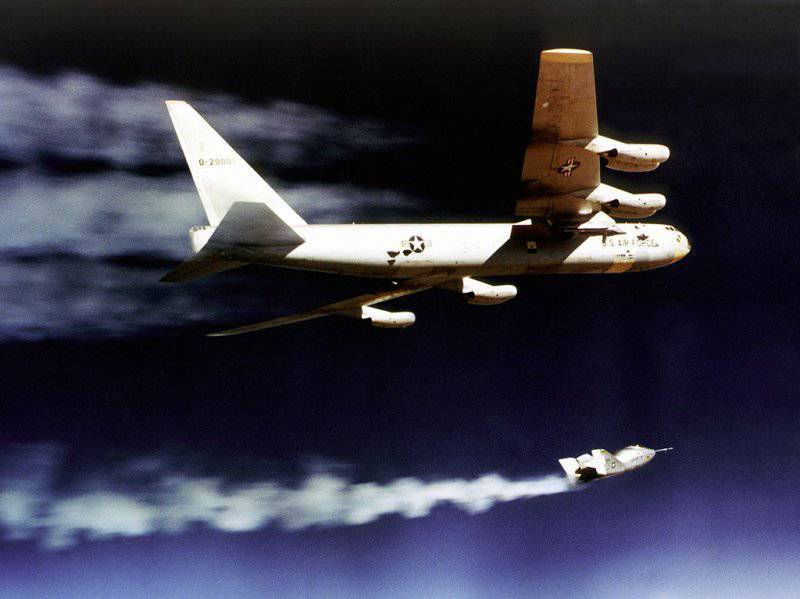 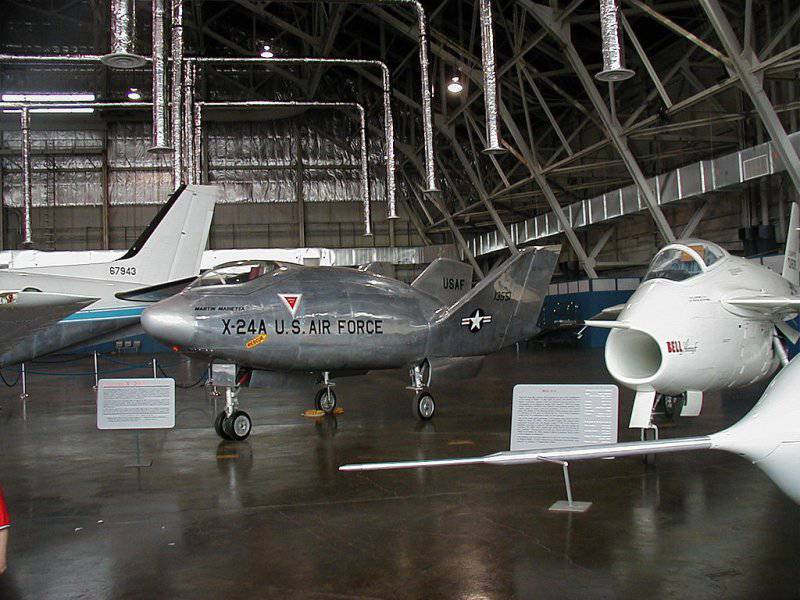 The spacecraft X-24B was significantly different from the prototypes SV-5, X-24 and X-24A. Appearance differed more "sharp" forms. The aerodynamic concept has been modified by the efforts of the Air Force Flight Dynamics Laboratory. The result was a kind of "flying iron" having in the middle part of the fuselage a "bubble" of the cockpit canopy. The length of the device was 11,4 meters, diameter - 5,8 meters. Flight weight increased to 6258 kg (mass of fuel 2480 kg). Engine running time has not changed, but thrust has increased to 4444 kg. In addition to the main engine, two special LLRV special landing rocket engines were installed (thrust 181 kgf). 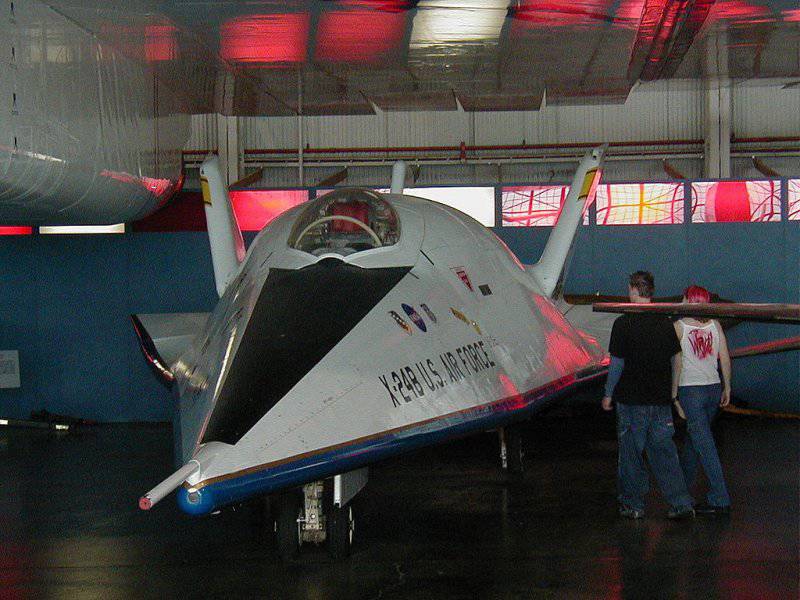 A total of X-24B made 36 flights of which 12 are planning. The last flight took place on November 26 1975 of the year. Unfortunately, the results obtained during the tests did not meet expectations. The maximum speed did not exceed 1873 km / h, the ceiling - 22590 m. X-24В, like its predecessors, was raised to a height with the help of the B-52 bomber. 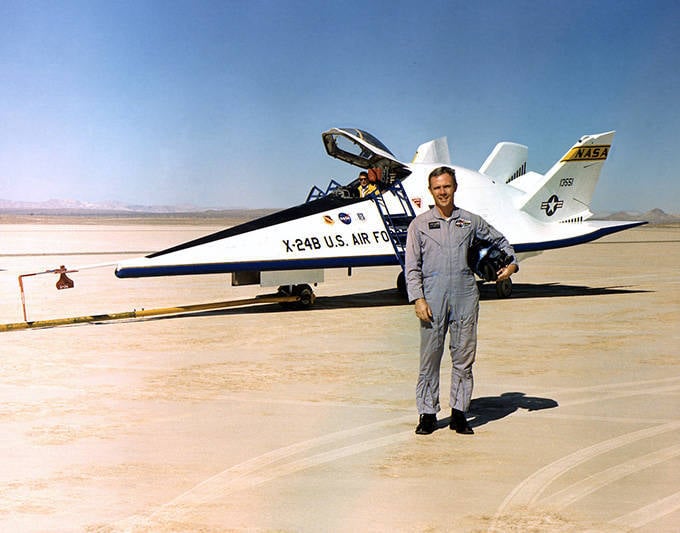 The testing program was not fully completed, since at that time the Space Shuttle space shuttle program was initiated, as well as the X-24 plus Titan III two-stage aerospace system of vertical launch.

Also stopped the program of development of an improved model X-24. Its development was conducted in 1972 - 1978. One of the X-24C models was planned to be equipped with a pair of direct-flow jet engines, the other with a liquid-propellant XLR-99 rocket engine, previously used for the X-15 rocket-based aircraft. Designers of the company "Martin" planned to conduct tests with 200 flights. It was assumed that X-24C will reach the speed of M = 8, but the 200 requested for research has not been allocated millions of dollars.

So far, only one program of the program has been preserved - the prototype X-24В, exhibited at the National Museum of the Air Force of the United States at the Wright-Patterson air base.