October 2 2013
119
At the 9-th international exhibition of military equipment, weapons and ammunition “Russian exhibition of weapons. Nizhny Tagil-2013 ”(Russia Arms EXPO 2013), one of the leading Russian manufacturers of cargo vehicles, the Ural automobile plant, presented several interesting novelties intended for Russian power structures. We are talking about modularly created family of multifunctional armored vehicles "Typhoon-U", super resistant to undermining the machines "Ural-53099", as well as machines for the Internal Troops "Ural-BB". It is about creating a tactical family of vehicles of various wheeled formulas, which will be distinguished by high unification.


Russia Arms EXPO 2013 traditionally took place in Nizhny Tagil from 25 to 28 in September. Within the framework of the exhibition, not only the novelties of the Ural were shown, but also their unique possibilities of overcoming obstacles were demonstrated (as part of a dynamic display). The basis of the automobile plant's exposition was the Typhoon-U family of multifunctional well-protected armored vehicles, which are designed to solve a wide range of tactical tasks, transport special cargo, tow trailer systems across all types of terrain and roads. This is a promising family of armored cars of the new generation, which is distinguished by enhanced protection of the crew, main components and assemblies, cargo from bullets and fragments, as well as a unique system of mine protection. In the machines presented at the exhibition a number of innovative design solutions were implemented.

The car "Typhoon-U" is a mobile platform that allows you to create cars with different wheel formulas, different levels of security from a set of various modules (power plant, control module, bridge, etc.), while at the base of the car is a bonnet layout . This design with a sufficiently large mass of armor protection of the machine allows for optimal distribution of the load on the ground, which provides the Typhoon with excellent cross-country ability. At the same time, the cars of the Ural family, unlike their counterparts, have a high unification on the component and aggregate base. 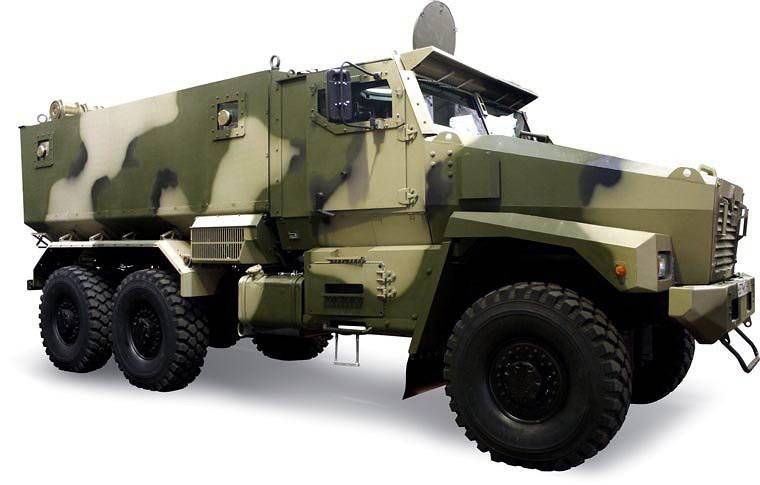 Typhoon-U
This year, the Russian armed forces are to receive the first experimental-industrial batch of multi-purpose tactical armored vehicles "Typhoon-U". These machines must take part in the program of state and military testing. In total, according to the site Rosoboronpostavka.rf, 30 units of this equipment should have been produced, the total cost of the lot will be 1 billion. 74 million rubles.

The development of these armored cars is a kind of technological breakthrough for Russian defense companies, since, despite the urgent need for such vehicles since the war in Afghanistan, our army was content with only trucks with local reservations. If such military equipment had appeared in the national army earlier, then perhaps it would have been possible to avoid so many victims in the protracted conflict in the Caucasus and various peacekeeping operations that were carried out by the Russian army over the past two decades. At the same time, the Russian designers did not sit with folded arms, even in the conditions of meager funding, work on the creation of advanced military equipment was carried out, but for obvious reasons, these machines were not purchased by the army.

Just a couple of years ago, it was reported that in Russia, in Naberezhnye Chelny and Miass, new cars of the perspective Typhoon family were developed. The KamAZ version of the main name received an addition in the form of a letter “K”, and the vehicles from the Ural received the designation Typhoon-U. The very first public display of these modern armored vehicles caused a storm of delight, even among those people who are far from military equipment. Many acknowledged the fact that the cars presented in no way inferior to modern Western designs. 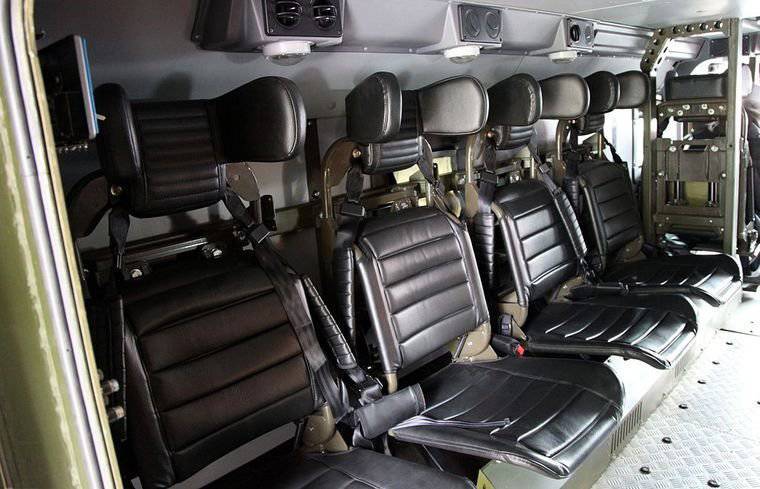 Indeed, the well-protected armored car "Typhoon-U" has a sufficiently significant mass, about 24 tons. The most advanced world technologies are applied in his armor protection. Radically solved the issue of increasing mine resistance. In addition to the traditional V-shaped bottom of the machine, which has already become, it itself is made of multi-layer, a special anti-mine pan is used. In addition, the floor inside the car is made on special elastic elements, and the landing is placed in the car on special shock-absorbing seats, which are equipped with belts and head restraints.

As part of the Nizhny Tagil exhibition, the public was shown for the first time a protected armored car "Ural-53099", presented in a modification with the wheel formula 4х4. The car is characterized by the presence of a single-armored hull for transporting 10 people. This car is completely unified with cars with wheel formula 6x6. Throttle and fairly maneuverable car, equipped with an engine capacity of 350 l. with. It will be used to recruit command and control centers and command various types of weapons. In the creation of this armored car, more than two dozen of the leading defense companies of the country took part. In particular, the resistance to undermining and the vehicle's armor protection was calculated by the specialists of the VNIIF - the All-Russian Research Institute for Nuclear Physics.

Another novelty was a well-protected vehicle for the Russian power structures “Ural-VV”, which was designed according to the technical task of the main command of the Interior Ministry of Russia. "Ural-VV" is the most consistent with all tasks set by the customer and has no analogues. The armored car with a wheel formula 6х6 has a single-volume armored body in which you can safely place up to 17 internal troops in fully armed and has strong anti-mine protection. The layout of the armored car is free, which allows you to install on it various versions of combat modules and equipment, depending on the assigned operational tasks. The powerful engine YAMZ of the Euro-4 standard and the well-proven chassis of the multi-purpose vehicle Ural-4320 provide the new product with high reliability and modern technical level. This car will be the basis for a whole family of tactical protected vehicles with a high degree of unification and different wheel formulas. The car can be used by all Russian law enforcement agencies without exception. 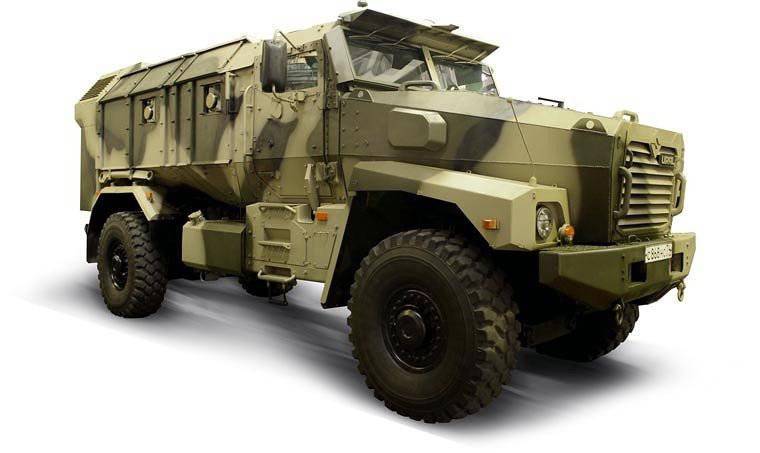 "Ural-53099"
The base of the family are multifunctional all-wheel drive protected three-axle cars "Ural-63095" (Typhoon-U) and "Ural-63099". The samples presented at the exhibition were modernized. "Ural-63099" (wheel formula 6х6) is a modern armored car with a one-volume body, which provides good protection for the crew, main components and assemblies, cargo from rifle weaponsand also equipped with mine protection. The one-volume body of this vehicle is designed to transport 12 people.

Frame armored car "Ural-63095" (wheel formula 6х6) is a bonnet multifunctional modular car. Its functional module has 16 footprints. The cabin of the car is three-seater, armored, it has a folding berth. Both cars have independent suspension with adjustable ground clearance and are designed to transport personnel and special cargo on roads of any type. On these armored cars can be installed up to several dozen different weapons systems, as well as military equipment for the Airborne Forces, Ground Forces and other security forces.

These cars are equipped with an automatic 6-speed gearbox, high-powered engines - 450 hp, which are produced by the Yaroslavl engine plant, which is part of the GAZ Group, as well as a mechanical 2-speed transfer case. On cars there is a two-way power steering system. During the solution of combat missions, cars are able to overcome almost two-meter fords, vertical walls up to 0,6 meters in height and rises to 60%. 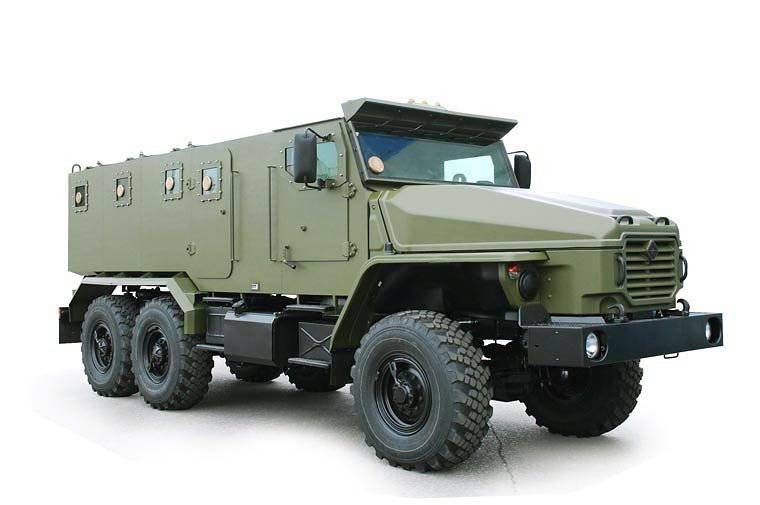 "Ural-BB"
Both new models are equipped with 2 fuel tanks with a capacity of 210 liters each, which exclude the possibility of fuel outflow and ignition. Cruising range of cars over 1000 km. Armored cars are equipped with a modern electronic control system with an open architecture, this system is highly reliable. This system not only displays to the driver all the necessary information about the state of the units and components of the machine, but is also able to perform the necessary diagnostics. If necessary, it can automatically report to the control on the state and location of the machine, as well as connect to external control systems. In this case, on the factory samples, research is being conducted on the study of robotic control of armored vehicles without human intervention.

At the exhibition, a wide delegation of Russian and foreign military met with the products of Miass Automobile Plant engineers. In addition, the exhibition was visited by Russian Prime Minister Dmitry Medvedev, with whom Vice Prime Minister Dmitry Rogozin, Russian Industry and Trade Minister Dmitry Manturov, and Presidential Envoy to the Urals Federal District Igor Kholmanskikh visited. They all met with the products of Russian and foreign manufacturers presented at the exhibition, talked with the developers and designers of military equipment. And then at the site were able to observe the demonstration shows of military equipment.