October 2 2013
18
Jaco's parrots were forbidden to be brought into the Soviet Union, but from Angola they were carried almost everything, bypassing customs in a cunning manner. For the transport of live cargo, it is necessary that this cargo behaves as if it were dead, that is, it didn’t flutter and generally smoked as a grill chicken, only small. Therefore, the parrots were simply soldered as much as a whole tablespoon of medical alcohol, after which they were cut off for at least a day and represented nothing more than a wordless anatomical textbook on the structure of the bird carcass in a state of anabiosis. Usually, the comatose animal was immersed in a container, like a tube for the drawings, in which neat holes were drilled, and in this state it was transported to a new residence.
Who knows, maybe this time the alcohol turned out to be diluted or a parrot experienced, but at the customs inspection, when the officer opened the bag, the drawing tube suddenly fluttered and a disheveled parrot got out of it.

- Op-pa! - only the customs officer could say, - What is it you, comrade, are transporting the illegal cargo ?!
The owner of the cargo had already gathered, it was to make excuses, but Jaco shook himself, straightened his feathers and shouted at the whole airport:
- I am Russian! I'm ru – y – y – sss! Russian!!!
Well, how was it not to let such a companion home ?? 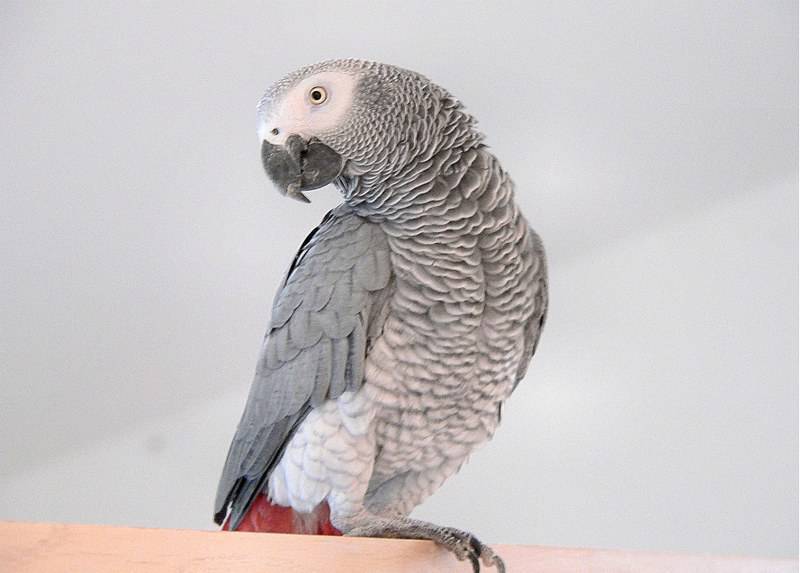 There are such parrots - Jaco. Many have heard about them, but hardly anyone has seen. They look inconspicuous, small, two or three times larger than wavy, greyish, without any special ornaments. One only distinguishes them - intelligence. Very quickly, they learn human speech and moreover, they apply the knowledge gained in time and place.
Jaco parrots live in Africa, and, despite all their wildness, they very quickly get used to and become attached to people, especially if they begin to communicate with them with their young. One of the military advisers, from a business trip, just brought such a chick. Small and naked, not yet overgrown with feathers, the officers fed him with his hand and tamed him in every way. A year later he grew up and, although he did not learn to fly, began to cheerfully run around the premises.
By that time, the gray parrot already knew a lot of Russian, English and Portuguese (Portuguese – English dialect, most of the population of Angola speak it) abusive words and used them in everyday life.

When in the morning his owner left to wash, Jaco ran out of the room and importantly walked along the corridor, looking in all the rooms in a row and commenting on what he saw:
- How so? What the *** nya? - He asked, looking into the first room - everyone was asleep there, which did not correspond to the parrot's routine.
- Na – a – aado! - He concluded and moved on.
- Media-and-Irnaaaaa! - Shouted Jaco at the entrance to another room. Major General M. Sr. lived there among military advisers and known for his commanding bass, and also in love to give a pretty one so that the Negroes of the world would not see the command.
- BUT? What?! Where? Fuck !!! - the awakening general cried, then turned away to the wall, and muttered, - That you died, feathered.
- The fool himself! - did not remain in debt parrot and moved on.

In the next room, only translators thrashed their eyes, and Jaco turned to them in the bourgeoisie:
- Fuck you, don't you gentlemen ??
- Jaco! Do not make me angry! - groaned Denis.
- May you not panima! - proudly declared a parrot and walked on. Colonel Crocodile was usually quite awake by that time, was busy with work, writing letters to his homeland and drinking local beer. His room was just following the translators. Near her, Jaco usually lingered and proclaimed a deputy for educational work in the mentor tone:
- Again thump, comrades ?! How can you!
- Do not teach me how to live! - answered the Crocodile and stretched a hand to a parrot. Jaco importantly stalked towards him, then climbed like a perch on his index finger, from there to the table and said:
- Bezbor – р – р – р – azie! No por – p – yadka! Around the sheer drunkenness and debauchery! Don't you think so? - and looked inquiringly at Colonel Crocodile’s eyes.
- I agree completely! - supported Crocodile and poured beer in a saucer parrot.
- Ur – r – ra! - proclaimed a toast to a parrot and drank, - Uhhhh, spirtyashshshka!

Since the room of Colonel Crocodile in the corridor was far from the last, and not only Crocodile was happy with the beer on a hot morning — to his master, already emerging from the shower, Jacot traveled in a state of some alcoholic intoxication.
- Eh, you bastards ... - the parrot owner said sadly, - Drink again. So what do I do with you?
- Let's go to the women !! - answered the parrot and both of them went to hang up in his room ...

The matter, meanwhile, was nearing the demob, the owner of Jacot was to go home. Suitcases are collected, photographs are printed, tickets are bought, jeeps to the airport are filled, in a word, soon, after only half a day, it is Homeland, cold and terribly wet compared to Luanda. Russian is everywhere, not just among its own. Little blacks and without weapons everything. Poverty, but not the same. Missed, in general.
But what about the parrot?
Why not do what other advisors did for generations? Drink a warrior, to sleep heroic and carry right in the luggage? However, it was not there! According to the precepts of the ancestors, for a little parrot, one teaspoon of pure alcohol is enough for a day of immobility. If the parrot is big, then the canteen.
The military council, after consuming doping, ruled that Jaco was still big. Immediately, alcohol was poured into a tablespoon and presented to a parrot.
- Speartiashshshka! - said the parrot and drank.
Then he hiccupped and said:
- Oh, frost, frost ...
“It seems a little ...” said the feathered owner.
“Do not freeze me,” said Jaco.
“So let's pour some more,” suggested the general.
Poured. Parrot, hesitantly trampled around the treats, mowing it with one or the other eye. It was evident that he wanted to drink, but somehow scary. Finally, having overcome all doubts, Jaco drank a second tablespoon of alcohol.
- Do not mo – rr – oz me! My horse! - He said, he swayed and fell on his side.
- Well, thank God. We'll put him in a container right now, and let's go, men, ”said the owner of the bird and got up from the table.
- Drunk! Around one drunk, a fly fly, ”said Jaco unexpectedly, and moving his clawed paws.
Everyone froze. Counselors silently and intently recalculated the amount of alcohol in two tablespoons of their size. While they were counting, Jaco clicked his beak and stood up. With militantly raising his tuft, he said:
- Walk, so walk! Hussar-r-ry! Champagne horse!
- That's awesome! Now still will begin to make a fuss, - the translator said.
“Silen is a vagabond,” muttered the general.
- Well, bastards! - the parrot owner boiled, - Still the bird has spoiled me! Well, I'll arrange you!
- Come on, do not shout, do not get drunk, and trained. And then with the habit of the opposite flippers could glue, or rather the wings.
- Yes? And what should I do now?
- Firstly, calm down, and secondly, pour more. Just Jaco is grated roll. In the cold just will not die now.

After the third parrot really overcame a deep drunk dream and it was packed in luggage. He naturally didn’t notice the flight, because he slept until the very end of the trip, and came to himself only at his master's house. When he woke up and got out of the box, the compassionate colonel was already holding a saucer of beer:
- Well, how, Jacques? No headache?
Parrot startled, raised his tuft and said:
- Cold fucking! - then went to the saucer and hung over. Apparently, the old drunkenness returned the intoxication and he, on his own, went to the box, where he lay down comfortably.
“Just like you,” the host’s wife angrily remarked, watching the whole picture from the beginning to the end.
- ***** - p – race! - cried out Jacquot and fell asleep.
- Just like you! - my wife said with conviction.