Special forces battles. Secrets of fighting at the lake Zhalanashkol 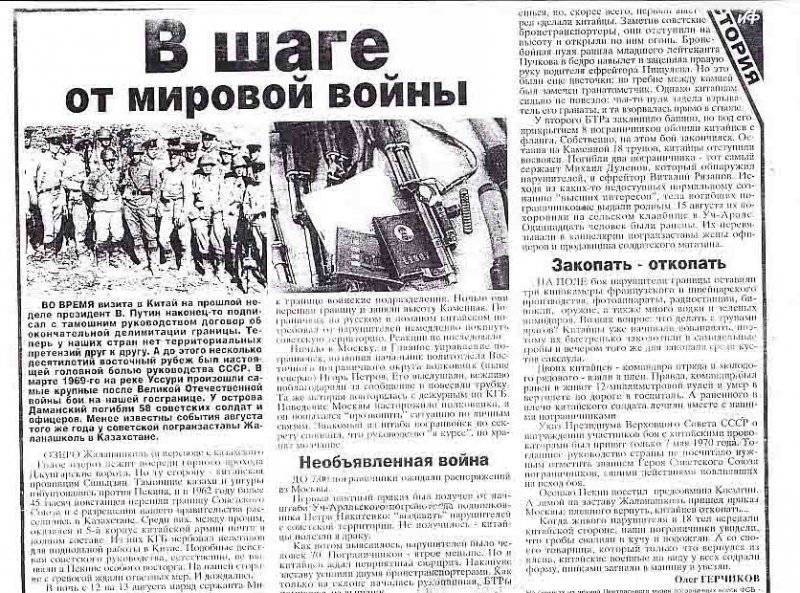 There is no doubt that when the required amount of time has passed, the statute of limitations has expired, and documents on border conflict events at Lake Zhalanashkol will be declassified on 1969. between the USSR and the People’s Republic of China, the public, according to seemingly well-known facts, is awaited by new discoveries. We'll have to rewrite the section in Wikipedia and beyond. There are reasons for this. In the autumn of 1998, at one of the civil defense events held in the Technical Lyceum No. 7 of Pavlodar, Kazakhstan, I was lucky to meet with representatives of various organizations Nikolai Alexandrovich Ebel, then deputy head of the repair service of the Thermal Networks enterprise. There was a lot of time, he turned out to be an interesting interlocutor, and, among other things, said that he was directly involved in hostilities on the border of the PRC and the Kazakh SSR, when he was serving in the army.

I managed to see the first material on these events in the media only in 2004 year, in “Arguments and Facts” No. 42 from October 20, entitled “One Step from World War” and I was quite surprised at the discrepancies in the description of events presented by Ebel ON. and the author of the newspaper material Oleg Gerchikov. I offer you their comparative analysis.

First, the background, taken from Wikipedia:

After the events of the spring 1969 on the island of Damansky provocations by the PRC did not stop. In May-June of the same year, the situation on the Dzungarian protrusion of the Kazakhstani section of the border worsened. On August 12, in the vicinity of the Soviet border posts “Spring” and “Zhalanashkol”, the movement of reinforced groups of Chinese military personnel was noticed in the territory of the PRC. The head of the Eastern Border Troops invited the Chinese side to negotiate, but received no response. Both outposts were put on high alert, trenches were dug along the border, a system of trenches and communications was created at the most threatened sites, and two armored personnel carriers were deployed on the flanks.

The materials of Wikipedia and AiF rather complement each other and slightly differ, telling about the heroism of Soviet border guards who are able to solve complex tasks on their own, only AiF even if casually exploits the rather beaten-up theme of Moscow's silence.

AiF - At night, the head of the political department of the Eastern Border District, Colonel (now General) Igor Petrov, called the head office of the Border Troops in Moscow. He was listened to, politely thanked for the message and hung up. Is the same история repeated with the duty officer of the KGB. The behavior of Moscow alerted the colonel, and he tried to “ring out” the situation through personal connections. A familiar from the headquarters of the Border Troops in secret said that the leadership was “in the know”, but remained silent.

And at this time ... from the words of Ebel N. who served as a private in the special forces, something happened that was never written in AiF and Wikipedia.

- 12 August 1969. Our unit received an order to load onto An 12 transport planes and we already changed the insignia directly in flight with the buttonholes and shoulder straps of the border troops. Issued caps.

- Order. The border conflict, therefore, cannot go beyond the scope of the border troops, otherwise it is war.

- Strange, I personally incomprehensible explanation. What happened next?

- We landed at night, guided by the light signal of hand lamps. There was a wind, a large spread at the landing, by the morning, the entire 25-30 man left the company to the assembly point. Moved to the line, to the height, entrenched.

- But so could someone get to the Chinese, because the landing was made in close proximity to the state border?

- I do not know what the landing pattern was. Perhaps it was the board with our group that passed in close proximity to the border. We were given the task, we completed it. In addition, the section of the state border, which should have been closed off, was rather lengthy, the full composition of the brigade was landed. It was possible to expect provocations in several places, and we were lucky, if I may say so.

- Do not remember the names of geographic reference? Lakes? Hill?

- Not. You never know what lakes and hills. All we knew was that we were on the border with China in the Ucharaly district of the Kazakh SSR.

With the mention of Ucharal district of the Kazakh SSR, the presentation of events by the parties begins to partially overlap. Why partially? Wikipedia and AiF say that the Chinese soldiers 13 August 1969. penetrated deep into the territory of the USSR to 400 meters, and for what purpose is not specified. Nevertheless, they had a goal, Nikolai Aleksandrovich speaks about it:

- The Chinese moved the border posts to our territory, the old pits from which they pulled them out, buried them and masked them with sod. You want, you will not find.

But it turned out later. Of course, Ebel N.A. I could not know how events developed before that, what character provocations were, the time of their beginning, he told what he knew. When the Chinese servicemen reached the line of their trenches, butting began with the pushing of each other on the parapet which had grown into a hand-to-hand dump. Was there an order to “squeeze out” violators, as AiF and Vicki wrote? Perhaps it was, but at that moment the guys were left to themselves, our soldiers 30 against more than 70 on their part, here the information of the parties converges. Roth against platoon. Nikolai Aleksandrovich asserts that there was a strict order - not to open fire and not to let the Chinese on, adding with genuine bewilderment

- It was hard. All completely two-meter deytin. But where are they two-meter Chinese scored?

A very interesting caveat for a thin man with an 1 height, see 85 meter. There is no doubt that from the PRC side there were the same “personnel border guards” as our hero. In any case, provocation is different from a misunderstanding that is carefully prepared and requires special skills. However, our special forces were stronger.
The first shot sounded from the Chinese military, says Nikolai Alexandrovich (AiF and Wikipedia suggest this).

- My friend Vitaly Ryazanov was killed next to me. After that, the fire from our side was the first I opened. Then there were three more days of fighting with a blow deep into the territory of China, there were a lot of victims, blood.

To the last words of Ebel N.A. should be treated with caution, because there interferes significant personal factor. According to the participant himself, after the events he was under investigation, he sat in the guardhouse for about a month, in fact the first fire was opened without an order. They wanted to take his case to court of a military tribunal. Fortunately cost.

I imagine myself on the site of a special department officer, and what else could a soldier do in those conditions? Do what you must and come what may, let the diplomats deal with the subtleties.

- Nikolay, single shots were heard from the violators. And how many times did you shoot back?

In any case, no matter how different the testimonies of the participants of those events were, it seems quite obvious that the events at Lake Zhalanashkol are an example of brilliant actions, both of Soviet intelligence and special forces of that time, head and shoulders above the Chinese comrades, about which we once Something still to be learned Separately, many thanks to the soldiers who have fulfilled their duty.

Attached to the text is a scanned photo from AiF taken from the archive of the FSB border troops, alas, in the newspaper’s online archive, it was for some reason inaccessible, so I apologize for its poor quality. The participants of the conflict are supposedly depicted on it, the circled person is surprisingly similar to Ebel NA, but this may be a coincidence.

Ctrl Enter
Noticed oshЫbku Highlight text and press. Ctrl + Enter
We are
Damansky, Dulaty, Zhalanashkol - unknown pages of the history of the Soviet-Chinese conflictPopular unrest in the USSR. 1953-1985
Military Reviewin Yandex News
Military Reviewin Google News
56 comments
Information
Dear reader, to leave comments on the publication, you must to register.