October 2 2013
26
Self-propelled vehicles with walking propulsion have long attracted scientists, engineers and potential users. Available studies clearly show the advantages of walkers over wheeled or tracked vehicles on several types of surface. At the same time, so far none of the projects of walking technology has left the stage of testing prototypes. The price of high road performance is the greater complexity of the design and the necessary control systems capable of controlling the condition of the surface, the operation of the aggregates, etc. A few days ago, there was a demonstration of the next sample of the walker, designed to solve some of the existing problems. 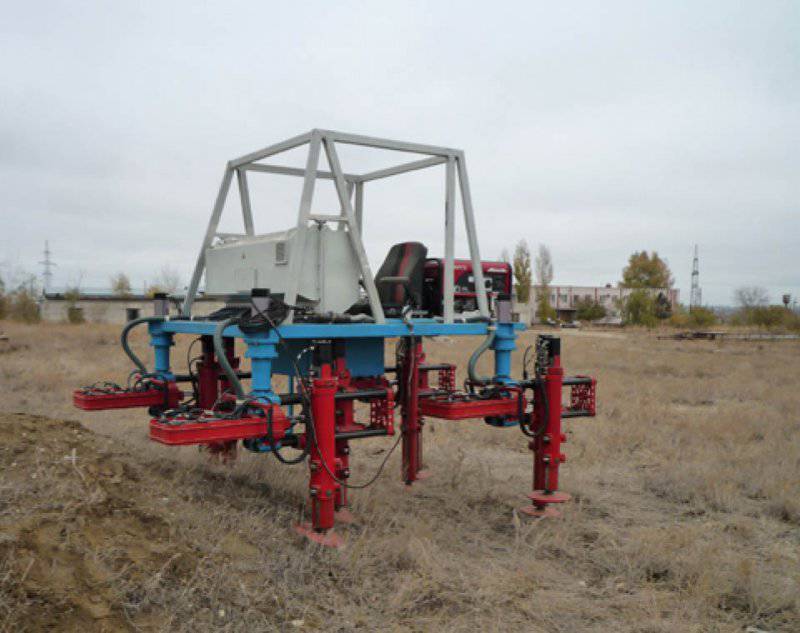 During the V International Scientific and Practical Conference "Progress of vehicles and systems-2013", recently held in Volgograd State Technical University (VolSTU), the participants of the event from 37 countries were shown the experimental apparatus "Ortonog". The walking machine, developed by the staff of the Theoretical Mechanics Department at the Volgograd Technical University and the TsKB Titan, is designed to test control systems and demonstrate the capabilities of a walker with an original orthogonal propulsion unit. It is worth noting that the Volgograd Ortonog first went a year ago, but the result of those tests was affected by the imperfection of the control system. Since then, the project developers have improved the algorithms by which the machine’s units operate, which has led to a noticeable increase in its characteristics. During the demonstration at the Ortonog conference, he walked freely around the demonstration site, receiving commands from the control panel.

The design of the experimental machine "Ortonog" is relatively simple, but at the same time effective. On the frame of the apparatus installed cab with the workplace of the operator-driver and control systems. Behind it is mounted a small-sized gasoline generator, which supplies the walker with the electric power necessary for its operation. Four blocks of orthogonal walking thrusters are fixed in the lower part of the frame. The prototype of the Ortonog car is painted in the colors of the Russian flag, which, among other things, facilitates the visual identification of various units. Thus, the cab elements are painted white, the frame is blue, and the chassis is red. The experimental machine weighing about 1200 kg has a total length of the order of 3,3 meters, a width of no more than 2,2 meters and a height of 2,75 meters.

Each of the four blocks of the chassis is conventionally divided into three elements: the mechanisms of vertical movement, the mechanisms of horizontal movement and rotation mechanisms. The former have electric cylinders in their composition and are responsible for raising and lowering circular supports placed on retractable rods. Ortonog has eight such supports, two for each block of the chassis. Mechanisms of horizontal movements, consisting of guides and actuators, are designed to move the cylinder and rod with the support. Each block of the chassis has two sets of guides and drives, one for each cylinder with a support. Finally, the turning gears deploy the entire chassis block around a vertical axis. The entire undercarriage of the experimental machine is based on electric drives.

The movement of the Ortonog walker on a flat surface is as follows. The machine lifts four out of eight supports (one from each block in the chassis) and shifts them forward using horizontal movement mechanisms. Further, the support falls to the surface and the cycle repeats, but this time the other four supports rise and move forward. During the movement, the Ortonog uses alternately vertical displacement drives, and horizontal mechanisms work almost all the time. If necessary, the mechanisms of rotation are activated. Their synchronous or separate operation ensures rotation to the required angle. As can be seen from the design, the experimental walker can take turns with a minimum radius. 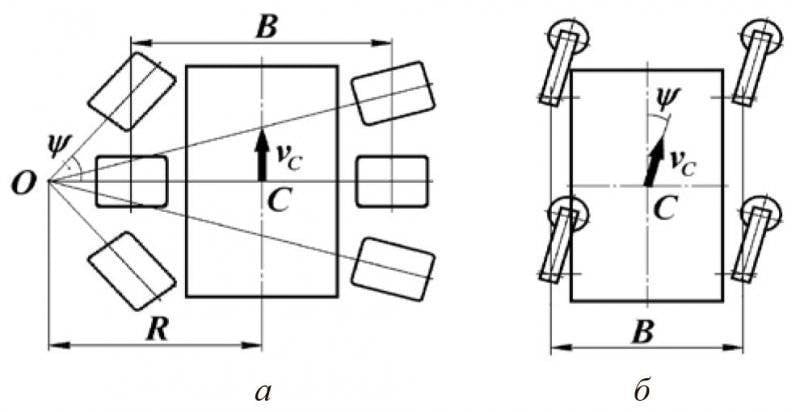 Fig. 5. The scheme of rotation of the wheeled (a) and walking (b) cars

All running gear mechanisms are equipped with sensors that collect information about their work. The information is transmitted to the operator’s driver console and it has the ability to make adjustments to the operation of the machine. One of the biggest issues in the Ortonog project is connected with the driver’s work. As practice shows, a person can effectively operate a machine only when driving on a flat surface. If there is a need to move over rough terrain, etc. complex routes, the operator cannot independently monitor the work of all the mechanisms and select the necessary operation algorithms at one time or another. In this regard, simultaneously with the technical part of the machine, an automated control complex was developed.

Initially, the following control method was used to test the experimental machine. The operator of the complex controlled the autonomous operation of the device according to the information transmitted by the video system. If necessary, in the first place, while overcoming obstacles, he interfered and made the necessary adjustments to the work of the walker. The overwhelming majority of machine control actions were carried out by automation without human intervention. In this case, the automation of the experimental apparatus received information about the operation of the systems and the position of the machine in space only from the sensors. No measures were taken to use the video signal. The result of this approach to the collection of information necessary to control the machine, was a situation in which the electronics can not bypass the obstacles and this requires the intervention of the operator. 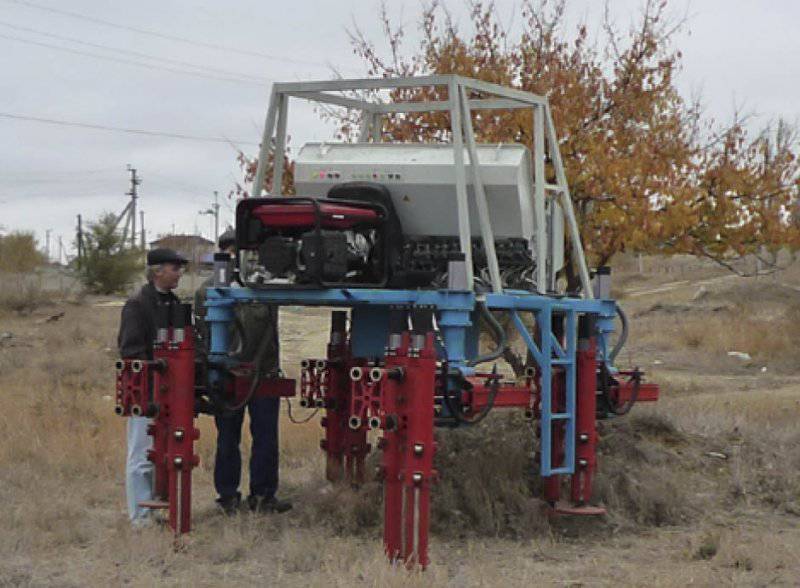 Such tests helped to gather the information needed to set up an adaptive walker control. Special equipment recorded all operator actions, information from sensors, and also recorded the signal from external and built-in video cameras. In the future, all recorded data were compared and those data fragments were selected that corresponded to specific actions of the mechanisms. This information was used for "learning" automation. The results of testing and fine-tuning control systems at first glance seem not too high. However, already at the end of last year, the Ortonog apparatus was able, independently and without the operator’s help, to move along straight and inclined surfaces and hold the required body position regardless of the angle of the surface. In addition, the unit “learned” to stop independently, stumbled upon an obstacle, and determine the size of the disturbance using the available undercarriage mechanisms.

Despite the fact that the Ortonog apparatus cannot yet become the basis for walking machines suitable for practical use, its prospects are already visible. As it follows from the available information on the progress of work on this project, the staff of VolSTU and TsKB "Titan" managed to develop an efficient walking propulsor and create control algorithms with good prospects. According to official data, the Ortonog car can accelerate to speeds in excess of 1,6 kilometers per hour. The length and height of the pitch of the support in 45 cm allow the device to overcome obstacles up to 40-45 cm in height, while maintaining the horizontal position of the frame. For more complex maneuvers involving the inclination of the apparatus, the maximum height of the obstacle increases to 80, see. The maximum width of the intersected moat is the 0,9 meter. Walking propeller is able to overcome rises to 40 °. When moving across a slope, the Ortonog retains stability at an angle of inclination of the surface to 60 °. Swivel chassis blocks allow the unit to change the direction of motion at any angle relative to its longitudinal axis. If necessary, it is possible to move sideways and turn with a radius of just over one meter.

It’s too early to talk about the prospects of the Ortonog project. This project and the device built in accordance with it are purely experimental in nature, which fully determines the future plans of the development organizations. In the near future, the department "Theoretical Mechanics" of the Volgograd Technical University and the Central Design Bureau "Titan" will continue to develop the walking propulsion and control systems for it. Only after the creation of full-fledged algorithms that are able to ensure the work of the walker on various surfaces and in different environments, it is possible to begin work on the following experimental sample. The next project can be used to improve existing developments and their adaptation to practical application. It is unlikely that a new project will appear in the near future: it may take several years to complete the work on the Ortonog apparatus. 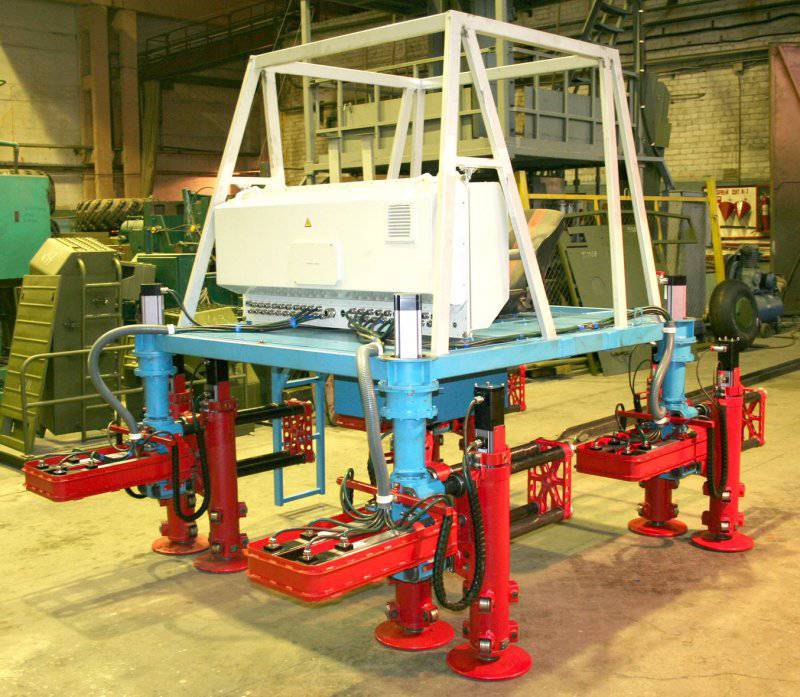