Novelties of the autumn draft in Russia

October 2 2013
36
October 1 2013 of the year in the Russian Federation began the next autumn conscription. Young people between the ages of 18 and 27 in the number of 150 thousands of 30 people will be called up until December of this year's 31. This autumn call has a number of differences from calls of the past. And these differences should be discussed in more detail. 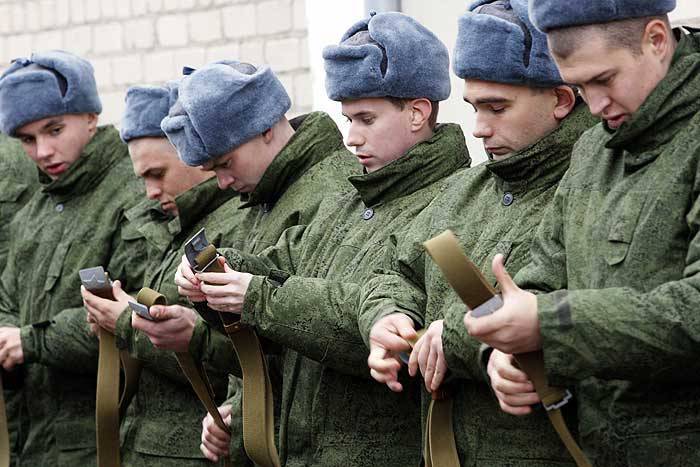 For a start It should be noted that under the autumn call 2013 of the year will fall on almost 3200 people less than under the spring call of the same year. The Defense Ministry explains this by the fact that in the army, with some advance of the plan (by about 6%), there is a replenishment of units by contract servicemen. According to Defense Minister Sergei Shoigu, the number of contract servicemen in the Russian army by 2017 should be about 425 thousand troops. Today, according to the deputy chief of the Main Organizational-Mobilization Directorate of the General Staff Yevgeny Burdinsky, about 190 thousand contract servicemen serve in the Armed Forces of the Russian Federation. General Burdinsky said that if the number of contract servicemen in the Russian army will grow at a planned rate, then the number of recruits will decrease somewhat. Plans for the autumn call 2013 such a decrease (by about 2%) have already been demonstrated. The total planned strength of the Russian army (the strength that needs to be achieved) is called at the level of 1 a million military personnel.

Second difference The current autumn draft is that the Ministry of Defense will give a deferment from serving in the army to those young men who are members of families affected by floods in the regions of the Far East living in these regions. Such a decision, of course, can be called timely and reasonable. After all, if one or another Far Eastern family lost all its property during a large-scale flood and needs urgent housing restoration, then the work of young guys of draft age, if there are any in this family, will definitely not be superfluous. If they are taken to the army, many families may be left without any help at all.

Third difference. It concerns the possibility of choosing the place of service by those draftees who are among the first to respond to the presidential decree on the autumn draft. If a young man of military age already in the near future will go to the military registration and enlistment office in order to declare his desire to go to conscription service, he can choose a region for service - for example, the same subject of the federation in which he lives. In addition, the right to possibly choose a region of service (community service) or a specialty can be used by married young people, guys who have learned certain skills (driving, parachuting, etc.) in DOSAAF RF, as well as future draftees who have elderly parents.

By the way, the main military department could well have thought about the peculiar combination of the second and third points mentioned in the material. It was quite possible for young people from the Amur flooding zone to consider help in the aftermath of the flood as a period of military service, and not just be limited to a delay. After all, when the consequences of the flood will be eliminated by the young guys who are really interested in this, then the work will go faster and not as an example with better quality. The main thing is less bureaucratic red tape and maximum efficiency: not just a postponement or a call at the place of residence, but also a clear purpose of the call - for restoration purposes. At one time, soldiers were used to build general dachas ... And in the case when local recruits help with the restoration of their native region, the Far East will only thank the Ministry of Defense, and not only the Far East, by the way. The last fundraising campaign showed that in difficult times our people are able to unite, despite a whole range of other differences.

Fourth difference. New sports and scientific companies are being created. In the scientific companies, which are now located in the Moscow region and Voronezh, will add another Moscow region scientific company and company in the northern capital. Only 60 people will fall into these companies. The Ministry of Defense declares the serious interest of recruits with higher education in getting into the service precisely in a scientific company. The competition promises to be huge. Conscripts who will be in sports companies, and this is St. Petersburg, Samara, Balashikha and Rostov-on-Don, according to statements by representatives of the Ministry of Defense, will also be preparing for possible participation in the Olympic Games. I would like to hope that in the scientific and sports companies there will be truly technically talented and athletic-trained young people, and not those who decide to use these military units as a screen of their shirking from military service.

The fifth difference. According to the representative of the General Staff, for the first time in stories parents can accompany their sons up to the military unit in which young people will be serving. True, at the same time, General Burdinsky made an important reservation. Parents will be able to arrive at the military unit not with their son, but at their own expense. Indeed, an important caveat. And it was already possible to think that all willing parents would be loaded into trains and, at the expense of the Defense Ministry, would be sent along with their sons to military units. And then - as in the famous Soviet cartoon about Sidorov Vova:

Vova goes to the army
And takes relatives with her ...
This is me
This is my mom.
I will serve with her -
I alone can not do anything ...
All right, - the regiment commander said, -
So be it, serve while.

The sixth difference. Now everyone will be able to do the army service with their dogs, which they will put to pay. If, when reading these words, a potential recruit decided that to facilitate military service, he would take a chihuahua with him - it was not there ... The dog should be trained and be of interest to the cynological service of the Ministry. General Burdinsky:

This may not necessarily be a German Shepherd. Here is a spaniel - hunting dog, has search skills, looking for drugs. It is in demand in the army.

Also important note. And then a fighter with a chihuahua in his bosom in the army would raise certain questions ...

Seventh difference. Those young men of military age who received a Russian passport will be subjected to military conscription, having previously served as a “time” in a foreign army. The Russian army will not call upon those who managed to serve in the armies of Turkmenistan and Tajikistan, since only with these states does Russia have a corresponding treaty. It is noteworthy that the representative of the Ministry of Defense did not say anything about the former citizens of Kazakhstan and Belarus. Either he forgot, or there was no such order, and the newly-minted young Russians from among the former citizens of the Republic of Belarus and the Republic of Kazakhstan can go to the army once more - now to the Russian ...

In addition to these innovations, it is necessary to note the distribution of special memos to recruits from representatives of the Chief Military Prosecutor's Office. These leaflets provide a list of the rights and obligations of the draftee, and also indicate the contact details of the GWP office nearest to this or that military unit. GWP representatives say that during the draft campaign in Russia, 145 will conduct so-called counseling centers, where parents or the soldiers themselves can receive important informational assistance, leave their suggestions and complaints, if they have any. The Main Consultation Center for the Main Military Prospectus is located in Moscow at Holznova, 16, tel. (495) 693-02-69. For more information, please visit the GWP website www.gvp.gov.ru.

We present the contact details of other GWP consultation centers:

Another important point: the head of Chechnya, Ramzan Kadyrov, decided to call up Chechen young people between the ages of 18 and 27 for military service. It is noteworthy that all Chechen recruits will most likely be serving in units of the Ministry of Internal Affairs, and not the Ministry of Defense, and exclusively on the territory of the Chechen Republic. This is the second “local call” from Ramzan Kadyrov. The first - spring - the same year. Then 120 young people were called up to the 46 Brigade of the Interior Troops of the Ministry of Internal Affairs of the Russian Federation, where they continue to “urgent” service.