October 2 2013
83
As expected, the Republicans and Democrats in the United States did not manage to agree in time on the budget for the new fiscal year (came October 1). Republicans deliberately put sticks in the wheels of the Obama administration: the latter has already dropped its rating extremely low, and now, after hundreds of thousands of civil servants remain without salaries, Americans will remember Barak Hussein as the worst president at all times. 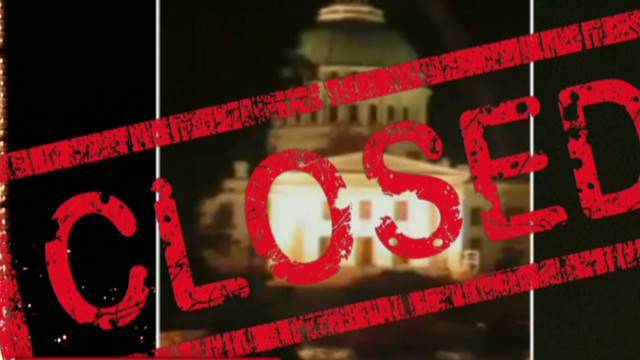 In the US, national parks, museum and other cultural institutions will cease to operate. The president will be left without economic advisers, cooks, laundresses and even without personal protection. Soldiers and civilians working for the benefit of the Pentagon, a total of about 2,2 million will remain without salary (will be sent on unpaid leave). In the United States, only mail, weather forecasts, and national security agencies will function fully.

The reason for new differences between Republicans and Democrats in Congress was write "Vesti" with reference to ITAR-TASS, the presidential health insurance program. The fact is that Obama proposed to make medical insurance not only affordable, but also generally obligatory. Those who could already afford the services of a doctor considered that it was undesirable to pay for those in advance.

If we count on 1977 of the year, then funding for the work of the federal government in the USA was interrupted at least 17 times because of disagreements between the administration and Congress. The executive branch was left without money. The shortest non-cash gap was 3 days and the longest 21 day (from December 15 1995 to January 6 1996). By to other sourcesIn the days of Clinton, power sat without money for 28 days.

It is interesting that just B. Clinton believes that Obama cannot be inferior in this situation. “There are situations when there is no need to succumb to provocations,” сказал Clinton in an interview with television channel ABC. “To stop (the health insurance program) is now more expensive than letting the Republicans finish what they started, but leave the program.”

However, let us add on our own, Obama and the Democrats still have a chance to avoid default. After all, the Senate voted against the budget project of the administration, which means the return of the document for revision. At the same time, it is unlikely that the Republicans will lose on all counts. In addition to expanding his medical reform, Obama wants to once again raise the ceiling on public debt. Republicans, on the other hand, want to freeze the medical program, which received the name “Obamacare” by the people, but it is better to cancel it, and reduce government spending, and in the long run.

Obama told obstinate congressmen that they must adopt a budget, and speaking on TV, he called Republican behavior irresponsible.

To some extent this is the case.

As Ekaterina Mereminskaya writes (Gazeta.ru), Asian stock indexes fell by 2%, which was a reaction to the political crisis in the United States - to the “shutdown” that threatens the government.

Raising the national debt limit is a real stumbling block in Congress. The current limit will be reached on October 17, and in early November, the American state will have nothing to pay not only to employees, but already to creditors. Raise the national debt ceiling? What is easier in America? But Republicans want for this step the abolition of "Obamacare".

As indicated by the correspondent. "BBC" Kim Jittelson (New York), if Congress does not reach a compromise, the country's economy may collapse. In this case, her recovery will simply have to be forgotten.

Even if the budget is approved, it will be impossible to relax. The Minister of Finance has long been engaged in “creative accounting” in order to continue to pay off debts after the top level of 16,7 trillion national debt. dollars was exceeded in May.

It is known that the debt ceiling in the United States raised from the year 1960 raised 78 times. But in the last three years, the correspondent reports. "BBC" Republicans use this very "ceiling" as a tool to influence the negotiations.

Today this problem has not been solved: before, the parties only found short-term compromises, not a solution. Now that October 1 was to take effect in a substantial part of Obama’s health care reform, Republicans are pushing wheels into the White House.

Most analysts, said Kim Jittelson, believe that the House of Representatives and the Senate will still approve a three-month law on the financing of federal agencies. But what about the debt ceiling? Previously, the United States never declared a default on debts. Such a move could lead to instability of the entire world market.

At the September 18 press conference, he stated that the conflict over the budget could worsen the situation: “I think that the government shutdown (and perhaps even more so, the inability to raise the debt limit) could have very serious consequences for financial markets and for the economy, as well as for the policies of the Federal Reserve System, which takes all the actions that allow the economic course to be maintained. ”

Hopes that the shutdown of the US government will not happen, died at the last minute. The White House refused to “surrender” its medical program and ordered government agencies to begin closing. What are the consequences for the economy?

For example, a three-week “shutdown” may lead to a slowdown in economic growth in October-December 2013 to the percentage point 0,9 (Goldman Sachs estimate).

If the national debt ceiling is not raised, the consequences will be truly catastrophic. The government will probably have to cut spending on 32% immediately, as estimated by the Center for Bipartisan Policy. The government can skip the interest payments on treasury bonds, which will cause the first in stories country state default. But the US Treasury bonds, the channel reminds, are in banks, governments and people all over the planet. Therefore, a long default can lead to a global financial crisis.

On the topic of the coming American and global crisis, he argued in "New York Times" and Paul Krugman.

The default of the US government, which happens if Congress does not raise the debt ceiling in the near future, could lead to a financial catastrophe, the economist writes. Unfortunately, many Republicans either do not understand this, or do not think about it.

Yes, there was a "shutdown" before - under Clinton, between 1995 and 1996 years. And many observers have concluded that it is not so scary. This is partly true, the author says, but it is important to note that under Clinton, "shutdown" occurred against the backdrop of a rapidly growing economy. Today the USA has a weak economy, the author reminds. Therefore, the "off" can be a strong blow, especially if it lasts a long time. However, “switching off” is a trifle compared to what happens if Congress refuses to raise the national debt ceiling.

Immediate cuts in government spending will almost certainly plunge America back into recession. In addition, the inability to raise the ceiling will lead to the omission of payments on the existing debt of the government. And this is fraught with terrible consequences.

Financial markets have long been fed on US bonds. These papers have always been considered safe assets. The assumption that America will always pay its debts is the foundation on which the global financial system rests.

The mere assumption that US bonds will lose reliability means a violation of this entire system. Such a default will create a huge financial crisis, before which, the economist writes, will fade the crisis associated with the "Lehman Brothers" five years ago.

Arguments about the politics and economics of these people Krugman calls "delusional."

Republican radicals, he notes with irony, generally oppose scientific consensus on climate change. Also, many of them reject the theory of evolution. How can you expect from these people that they will believe the experts, warning of the danger of default?

As for politics, then sensible people know that Obama cannot allow anyone to blackmail himself - and this is not only a matter of health care reform. To yield to people who threaten to blow up the world economy is about the same as giving up the Constitution. But the Republican radicals still insist that Mr. Obama will bend under their demands.

Paul Krugman knows what will end the fuss.

Who pulled the country into economic chaos? Wall Street. Who will save the country? Wall Street. This is the most likely answer. Big money, Krugman writes, will indicate to Republican leaders that it’s time to put an end to the “nonsense”.

In conclusion, the economist and the Nobel laureate notes with bitterness that insanity lies not in the current situation, but in the minds of politicians and those who voted for them.

Observed and translated by Oleg Chuvakin
- especially for topwar.ru
Ctrl Enter
Noticed oshЫbku Highlight text and press. Ctrl + Enter
We are
Results of the week. “We won't give you the keys! We're not Pinocchio! ”Geopolitical mosaic: DPRK threatens enemies with a "special tool", and Mitt Romney caught up with Barack Obama
Military Reviewin Yandex News
Military Reviewin Google News
83 comments
Information
Dear reader, to leave comments on the publication, you must to register.