US Marine Corps will receive a new Havoc BTR

October 1 2013
21
In the summer of 2013, the American company Lockheed Martin successfully completed the test program for protecting the new modular armored car Havoc (“Havok”) with the wheel formula 8х8. The new BTR was developed as part of the MPC program - Marine Personnel Carrier. With the help of detectors mounted on an armored personnel carrier, it was found that during the tests no damage was noted that would cause damage to any of the 3 crew members or 9 marines inside the combat vehicle.


“Willingness to perform various combat missions and security are our top priorities, and today we can say that the Havoc armored personnel carrier is able to protect marines in real conditions of modern combat. The Havoc's armor proved that all our preliminary calculations are correct, ”said Scott Green, who is vice president of ground vehicles at Lockheed Martin Missiles and Fire Control. In March, the 2013 of the year BNR on 100% performed all the test conditions that were organized to detect the buoyancy of the vehicle. Currently, the BTR is ready for mass production, a very high degree of unification of parts and assemblies with other floating vehicles of the Marine Corps (ILC) was achieved in the combat vehicle, which significantly reduces the cost of the vehicle, simplifies logistics and facilitates personnel training. .

The Havoc armored personnel carrier is a modern multi-purpose expeditionary combat vehicle, which was created on the basis of the successful baptism of the modular Finnish armored personnel carrier Patria (8х8) that was widespread in many armies of the world. In close cooperation with the specialists of the Israeli company Plasan Sasa Israel, Lockheed Martin engineers conducted a large-scale modernization of the combat vehicle in the interests of the US KMP. The configuration used allows placing on its base a wide range of weapons, communication systems and sensors for the successful solution of various tasks. The Havok armored personnel carrier has very good transportability and mobility indicators and is able to protect the crew and troops from various threats on the battlefield. 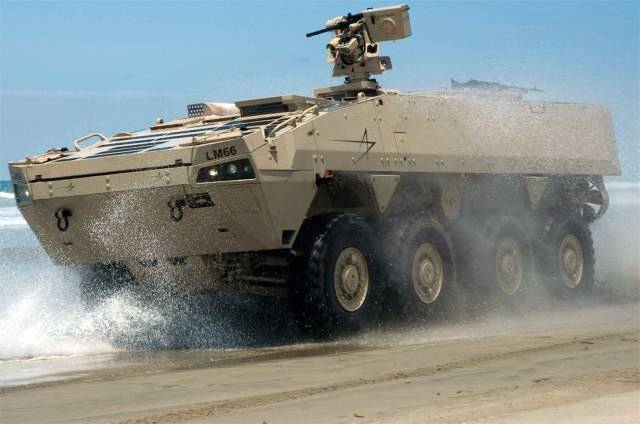 The armored personnel carrier was developed as part of the MPC program, which provides for the purchase of the 579 "medium" floating BTR with the wheel formula 8х8 for the US KMP. The program provides for the achievement of the operational readiness stage of the units armed with this equipment for the 2018 year. It is expected that in each of the battalions of the marines a new fighting vehicle will be equipped with a 1 company. It should be noted that the MPC program is complementary, and not alternative to the purchase programs of the promising EFV amphibious combat vehicle Expeditionary Fighting Vehicle, and after canceling the latter, the amphibious ACV amphibious tracked armored personnel carrier program adopted instead of the EFV is Amphibious Combat Vehicle. The basic requirements for a wheeled armored vehicle envisaged a combat weight in the range from 20,4 to 25 tons, enhanced mine protection, maximum speed on land at 65 mph, and on water - at least 6 nodes.

The prototype of the Havoc armored personnel carrier, manufactured according to the requirements of the USMC, was shown last year at the exhibition “Modern Day Marine”. The BTR did not have a V-shaped hull bottom, but in order to increase the level of protection against mines and land mines, the BTR was equipped with a special “subframe” of the hull. The armored vehicle also had a reinforced floor and special shockproof seats for the crew and landing force. So far, the KMP has not fully decided on the composition of the armament of the machine being created as part of the MPC program, but the prototype Havoc was equipped with a turret with an 40-mm automatic grenade launcher and an 12,7-mm heavy machine gun. The turret is similar to the one installed on AAV tracked armored personnel carriers used by marines. 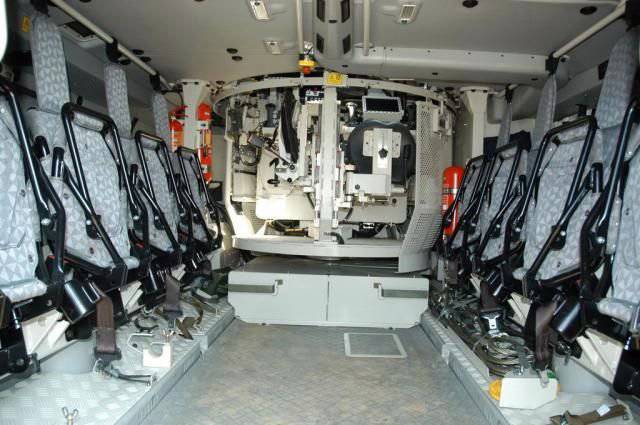 Work on the creation of the wheeled armored vehicle (KBM) of the new generation of Patria AMV - Armored Modular Vehicle began in the middle of the 90s of the last century. The basis of the new project Finnish designers put the results of research, which were carried out by scientific and technical units of the Finnish army, as well as the accumulated experience in the development and operation (including in peacekeeping missions under the auspices of the UN) BTR family Sisu HA-180, having a wheel formula 6x6. These machines have been manufactured in Finland since 1984. Finnish engineers considered several chassis options for the new armored personnel carrier - 6 x6, 8 x8 and 10 x10. At the same time, the military and specialists of Patria Vehicles came to the conclusion that the best for replacing the XA-180 will be KBM, having the wheel formula 8х8. This chassis best suited to the deployment of a variety of weapons and increase the security of the crew and landing force.

The hull of the KBM is welded, made of high-hardness rolled Armox armor plates. In the standard version, the armor of the vehicle is able to withstand the hit of ordinary NATO bullets of caliber 7,62-mm and corresponds to the 2 class of protection of the standard STANAG-4569. To increase armor protection can be used additional armor plates. In any case, according to the creators, the armored personnel carrier Patria AMV is not afraid of even 30-mm sub-caliber ammunition when firing at a frontal projection. In order to reduce the impact of the cumulative jet in case of an RPG RPG grenade hit in an armored troop-carrier, the combat vehicle is equipped with a lining that includes composite panels. 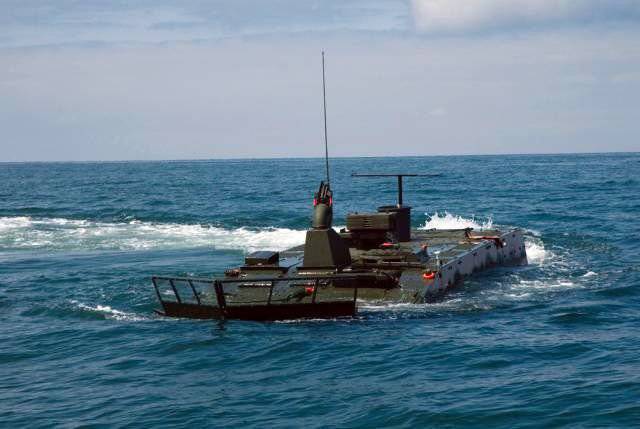 Unlike most of its counterparts, the Finnish BTR Patria AMV does not have a carrying body. Elements of its chassis are attached directly to the frame. Due to this, it was possible to significantly simplify the design of the lower part of the case, in addition, the frame protects the driveline from all sorts of mechanical damage.

The transmission, the engine and the undercarriage provide the KBM with a mass of 16 tons (in the BTR version) the maximum speed on the highway in 100 km / h. With the increase in the mass of the machine to 27 tons, depending on the modification, its dynamic characteristics do not become worse, since the range of different motors with power from 335 to 536 hp can be used for installation in Patria. At the same time, all KBM weights up to 22 tons are floating. For movement on the water surface in the rear part of the armored vehicle, 2 jet propulsion units are mounted, which allow afloat speeds up to 10 km / h.

The main attractive feature of the Patria AMV wheeled combat vehicle is the modularity of the design. First, at the request of the customer on the armored car can be installed a variety of transmission options and engines, heating systems, cooling systems, air conditioningcollective protection against weapons of mass destruction, as well as wheels of various types and sizes. Secondly, due to the various configuration of the base chassis, special equipment and armament at the output manages to get equipment of various purposes - BTR, BMP, KSHM, SAU, BREM, BMM, etc.

The most interesting of all presented on the market today is the version of the BMP for the UAE army. This vehicle is equipped with a turret with an armament complex from the Russian BMP-3. In addition to the BMP and BTR, two mortar systems AMOS and NEMO were developed on the basis of the wheeled combat vehicle Patria AMV. The first one is curious in that it includes a tower with two paired 120-mm breech-loading smooth-bore mortars that work in tandem with an automatic loader system. The NEMO version is a lightweight version of the AMOS system - it has only one 120-mm barrel.