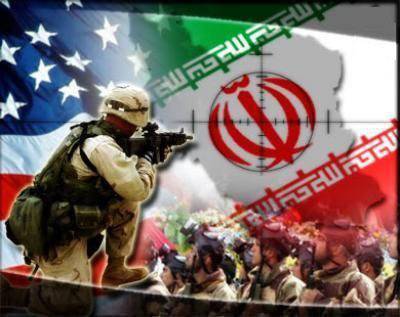 "Iran is now, like Maximilien Robespierre - between tragedy and farce!"
Dmitry Ershov @David_Arius

The end of last week was marked by a sharp "warming" of relations between the US and Iran. The newly elected President of Iran, Hassan Rouhani, attended the UN General Assembly in New York and even 15 minutes talked on the phone with US President Barack Obama. In fact, this is an unprecedented event for the whole history The Islamic Republic of Iran, where until then the United States had not been called the “Big Satan” before. True, at home, Rouhani’s initiatives to begin a dialogue with the United States were not approved by everyone. As a result, Iranian conservatives threw Rouhani's motorcade with boots.

What lies behind such drastic US maneuvers in the Middle East ?! And the essence here is the same. Having suffered a complete fiasco in late August-early September this year with the start of the Great Regional War in the region, the demiurges of these processes took a different path. At one time, Plutarch ascribed to Philip of Macedon (The father of the very Alexander of Macedon) saying that "A donkey loaded with gold will take an impregnable fortress". In the USA now, apparently, this thesis was adopted as a guide to action in the Middle East.

So let's see who and what is needed there.

What does the USA need ?!

The elite of the United States, the one that really "rules", and does not sit in the White House and Congress, you need a big regional war. The reason here is simple and clear, like "2 + 2"! These are economic problems. The external debt of the United States has already gone beyond all reasonable limits, the domestic debt is even longer than the external one, and we should add more "dirty assets", "financial bubbles" and a fully virtual economy, and, most importantly, a dollar that is not secured. Since even almost all of their gold reserves and a part of someone else’s in addition, the United States has long been sold off to a quiet one. There is one way out in this situation - this is war. But the problem is that no one wants to fight, and there is no serious reason. This is the beginning of September this year in the United States understood and changed the strategy.

What does Iran need ?!

Iran is the richest country. The truth is that it is hampered by international isolation and sanctions, which were imposed on Iran by the West, or more precisely, by the United States. This has been done through the UN or through someone else - this is not so important. The fact itself is important - the US is behind the sanctions against Iran.

Accordingly, in Iran, where the economic situation because of the sanctions is very, very sad, they want only one to remove these sanctions. Sanctions - a kind of American "carrot" for Iran, with which you can do a lot. This has been clear for a long time. For example, this is why I, as the 3 of the month, have constantly said that Russia should unilaterally withdraw sanctions from Iran. Then the US "carrot" would simply disappear, Iran would start developing normally, and our country got access to the markets of half of the Middle East and oil for "5 kopecks." But, unfortunately, although they listened, they did not hear.

Well, now US Secretary of State John Kerry declaresThat: "The decision to lift international sanctions against Iran can be made in the coming months. To do this, Tehran needs to cooperate and open facilities for inspections of the country's nuclear program.". What does all this mean and where does Iran’s nuclear program ?!

This means only one thing. The US elite decided to take extreme measures and began to offer Iran a "carrot" in the form of lifting the sanctions. At the same time, I, unlike my good friend and colleague political scientist Lev VershininI still think that Iran is not yet tamed, and in the leadership of this country there are far from “donkeys” who can easily be taken by this very “carrot”.

What is the price issue?

So, back to the Iranian nuclear program. Do you want me to tell you all a terrible-prestrashnuyu secret? Actually, Iran’s nuclear program is of no interest to anyone except Iran itself. This is just a reason. For example, nuclear weapon in large quantities has long been in a country like Israel. Israel is a Zionist state. According to the same Resolution No. 3379 of the UN General Assembly entitled “Elimination of all forms of racial discrimination”Zionism is nothing but a form of racism and racial discrimination. That is, Israel is a racist state that discriminates against the rights of a part of its population. But at the same time, Israel has several hundred nuclear warheads, but something is not heard about the sanctions against Israel. At the same time, Iran is not a racist state, but sanctions have been imposed on it, although Iran still does not have any nuclear weapons.

Another nuclear weapon is in a regime like the Kim Jong Un regime in the DPRK, as well as in Pakistan. Honestly, I am not ready to call Kim Jong-un a sane politician. In my opinion, he, like his dad Kim Jong Il, is sick with his head. And this is incurable. And Pakistan, with its "Taliban" and a bunch of other evil spirits, to call my language a stable state. But here the racist regime of Israel, “frozen” over the whole head of the regime of the DPRK and the unstable regime of Pakistan, has nuclear weapons, but Iran does not. Paradox?! But no!

Iran, in principle, might want to have a nuclear bomb, but Tehran would not have much sense from it. For example, the DPRK, for example, has a nuclear bomb, but what is the use of it in real terms ?! But at the same time, Iran is important in the development of nuclear energy. The country just needs electricity. Hence all the radioactive components. By the way, our RosAtom is engaged in the development of Iran’s nuclear power industry. Literally the other day in "Rosatom" stated on the transfer of Bushehr NPP to Iran. What the hell is a nuclear weapon ?!

The point here is different. The United States and Iran will not negotiate on Iran’s nuclear program, which really doesn’t care not only that the United States, but even Israel and I have already explained above why, but in Syria. The United States will offer "exchange" to Tehran. That is, Iran "surrenders" the regime of Bashar Assad in Syria in exchange for the lifting of sanctions from Iran. Of course, the "tame" Israel is already noisy, but this is a noise to nowhere. With this, Barack Obama in negotiations with the same Israeli Prime Minister Benjamin Netanyagu also explicitly stated that: "I do not remove from consideration any options, not excluding military actions. The United States agrees that everything must be done so that Iran does not possess nuclear weapons.".

What does all of this mean?!

So this is only the fact that first on the sidelines of Iran, American diplomats will offer to “exchange” Syria in exchange for the lifting of sanctions. Accordingly, if such agreements are reached, then everyone will know from the media that, in fact, Iran simply does not have a nuclear program. At the same time, the same Benjamin Netanyagu will continue to shout to the whole world that this is not the case, and Iran will have a terrible and terrible teratermoyadern “shaitan pipe” from which almost all the people will die tomorrow. And, you know, what will happen in three or four months after the American Jews in Saudi Saudi money overthrew the regime of Bashar al-Assad ?! So, the "whole world" will hear Netanyagu screaming about the mythical nuclear program of Iran and Iran, everything will start in a new way. With the only difference that having lost the outpost in Syria in the face of Bashar Assad and the SAR Army, as well as the outpost in Lebanon in the face of the Hezbollah movement, Iran will be doomed to be in the "ring" of friends in the face of the radical Islamists of Iraq and Sham and the Kurds (With whom Iran’s leadership is not so good) from the West; Turkey and Azerbaijan from the North; Afghan Taliban (Who in half a year is likely to completely take power in Afghanistan) from the East and the "Monarchy of the Persian Gulf" from the South. For Iran, this will only mean the end.

I just hope that this situation is understood in Tehran. Because in the case of the fall of Damascus, the collapse of Iran itself is inevitable, just as a major regional war in the Middle East is inevitable, with the subsequent radicalization of the entire Middle East and the arrival of all this evil in Central Asia, as well as in the Russian North Caucasus and the Russian Volga region.

PS: In the 20th century, the Zionist Rothschild Jews, through their puppets, Bush and Rockefeller, brought Adolf Hitler to power in Germany. Who is interested to know the real historical facts, then about all this is described in detail in the relevant chapter of my book "The twentieth century: Russia against the backdrop of global betrayal". As we all know, then Adolf Hitler gave a “Holocaust”. As the German philosopher Georg Hegel said, "All the great world-historical events and personalities are repeated twice: the first time as a tragedy, and the second - as a farce". The tragedy has already happened in the 1939 year. Now the farce will repeat ... Although in perspective with the same tragic consequences.