Reflections on the Eurasian Union

October 1 2013
220
Two years ago (October 3 2011 of the year), Vladimir Putin, being at that time in the position of Prime Minister of the Russian Federation, published an article in which he conducted discussions about the possibility of creating a certain territorial association, which Russia, Kazakhstan and Belarus are able to enter, and this union could would become, according to Putin, one of the poles of the modern world. The new territorial association of the then Russian prime minister in the article referred to the Eurasian Union (EAU), declaring that in the future, the close integration of the mentioned states would allow all to achieve economic well-being together, and a quote from "civilizational progress". 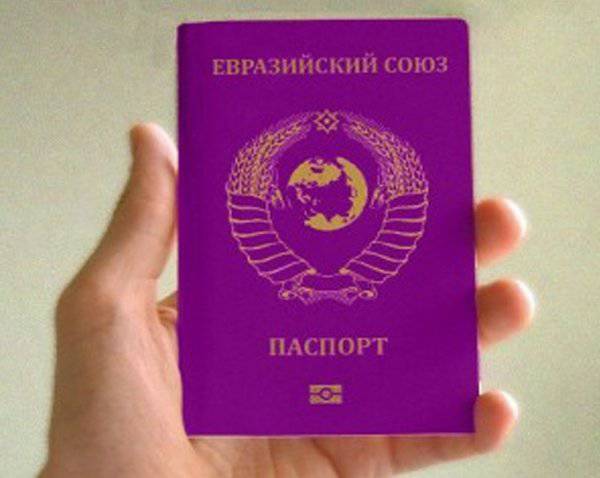 The Eurasian Union itself, despite the fact that the name “economic” often appeared in its name, since the beginning of Vladimir Putin’s first ideas on this subject, was positioned far from only as an economic association. The union was also endowed with common political, military and other interests, with the absence of customs barriers and sectoral unification. At the same time, the status of all states that can enter it was defined a priori as sovereign - with their own independent authorities delegating representatives to the single “brain center” of the Eurasian Union.

Since the publication of the publication of Vladimir Putin, as already mentioned, it has been almost two years. What happened during this time in relation to the thesis on the creation of the Eurasian Union has changed (not counting the fact that Putin changed the premiership status to the status of the president of Russia), at what stage is the construction of the EAU is, and is there a future for such a territorial-economic-military-political alliance States in the post-Soviet space?

On the one hand, it may seem that everything is going according to plan: there is a Customs Union, joint military exercises on its territory are being held, reconciliation of political positions, for example, in Syria, is present, the presidents of the Russian Federation, the Republic of Belarus and the Republic of Kazakhstan meet quite often positive wave discuss various issues.

However, this process, like any other, has a downside. It lies in the fact that there is a set of objective realities against which, as they say, you will not trample. One of such realities is the inability of most of the territorial associations of the world to exist and develop on the basis of full sovereignty and equality. At any moment of the integration process, there will definitely be someone (as a whole state or as the head of such a state), who will implicitly begin to bring his own territorial, political, economic and other segments to the fore. Moreover, this desire to “be a little ahead” often appears on the basis of a combination of other equally objective realities. It's like in a normal court, where the majority are comrades, but among them there is necessarily one who is stronger, one who is richer and one who is more cunning. For the time being, the comradely component prevails, but a black cat can run at any time (she can run, or someone can throw it), and then, usually, it begins ...

It is noteworthy that in the case of the Eurasian Union, the very beginning of the formation of this union began with a certain incident. At the time of putting forward the idea of ​​close integration between the three states in 2011, this idea was supported in Russia by about 54% of the population, in Belarus about 44%, in Kazakhstan - a little more than 52%. The number of people who expressed their categorical rejection of this kind of integration, according to opinion polls, accounted for about 19% of the total number of respondents in three states. The rest were either “rather for”, or “rather against”, or simply refrained from answering. The incident was that within two days after the publication of the very article of Vladimir Putin in October 2011 of the year, the number of supporters of the idea in Belarus and Kazakhstan began to decline. In Belarus, the number of supporters of integration with Russia, according to the statistical services, generally fell below the number of supporters of European integration (today these figures are at about the same level). The reason for the fall in popularity of the idea was the statement by the Putin press service, which stated that Moscow is in favor of creating a single issuing center of the EAU with the simultaneous introduction of a single currency.

Of course, the press service led by Dmitry Peskov did not declare that the ruble should certainly become the single currency, and that the single emission center would be located in the Russian Federation, but this neighbors understood this message. In the Belarusian and Kazakh press, especially in the Internet publications of that time, there was a heated discussion about the fact that the Eurasian Union is Putin’s idea, according to which he is going to get control over the neighboring states, spreading his influence. The Belarusian and Kazakh authorities, too, to put it mildly, took the words about a single currency and a single issuing center with little enthusiasm, which led to a kind of information campaign to counteract Russia's “economic expansion”.

Obviously, the Russian authorities realized that the single currency and other “single” things for the EAU were a little early, they had to play back, using the words that if the joint work proceeds in a constructive and energetic manner, the EAU features can take shape already by 2015 year.

Let's try to dwell on the new thesis of Vladimir Putin - on the implementation of the idea of ​​creating the EAU before 2015. And having stopped, we immediately face the question: how much can the Eurasian Economic Union really appear on the world map in less than a year or so?

Theoretically can. But in what form? The fact is that if the EAU starts to translate into reality as a kind of analogue, for example, of the European Union, in the end, you still have to discuss the issue of the emission center and the creation of a single currency. There is a so-called supranational single emission center in the European Union (in the part that is usually called the “eurozone”), which the European Parliament can theoretically influence, and in practice a narrow group of states (Germany and France). If we assume that the Eurasian Union will also begin to create a supranational center for the issuance of financial resources (CEFS), then first we will have to form (at least for legal substantiation of all work) the Eurasian parliament - a sort of Congress of Russian, Belarusian and Kazakhstan deputies, ministers, representatives of other departments which will have to determine to whom and how much “to weigh in grams”. Will such a Congress be able to work productively and make decisions that suit everyone? I would like it to be that way, but at some point this or that group of deputies will still turn into extras, with which it will either have to be reconciled (well, for example, as the Communist Party of the Russian Federation as part of the current State Duma, or as Greeks in the European Parliament) , either announce “withdrawal from the game”, or gain strength and call for the restoration of equality. In this case, the first two options look the most likely.

If we allow the first option (a group of extras with a certain majority), then the Eurasian Union may in time repeat the fate of the European Union. Berlin and Paris dominate there (now, it seems, only Berlin), and in the Eurasian Union such an advantage will most likely get to Moscow. But then “something else” arises: Lukashenko and Nazarbayev (at least for the time being) are not some Greek Karolos Papoulias or Antonis Samaras who can admit positions of extras if there is a certain main decision-making center. Lukashenko and Nazarbayev can beat their fists on the table ...

Then - the second option - "out of the game" ... Unless, of course, Russia does not provide both Belarus and Kazakhstan with manna from heaven. Perhaps, I would like to provide it, but economic indicators, as we were told by Prime Minister Medvedev just now, leave much to be desired, and therefore they themselves predict a tightening of belts.

It turns out that even the presence of the Eurasian Parliament and the single emission center of a supranational (supranational) character are only the old European rakes on which Moscow, Astana and Minsk can step on.

So you need to look for some alternative options. But which ones? You can, of course, remember that our states have far more solid cultural and spiritual ties, rather than ties, offhand Germans, Greeks and Poles. But will this be enough to create a full-fledged association? After all, culture and roots are one thing, and economic and political interests are another. There will always be politicians who, if they remember the so-called spiritual bonds, only after they receive guarantees of achieving economic and political goals.

Then, perhaps, to agree on a kind of triumvirate (Putin-Lukashenko-Nazarbayev), which will solve all the issues in the EAU. But this is something from the level close to utopian, if only because all three politicians have enormous political weight separately (at least in their own countries), and therefore compromises will not be permanent (the issue of a single emission center, recognition independence of South Ossetia and Abkhazia - these are just a couple of examples, let's say, “friction”). And not one of the presidents mentioned is eternal on political Olympus ... This, too, should not be forgotten, since if the unification of states rests solely on the interests of their leaders, then the coming to power in any of these countries of another politician can destroy everything overnight.

Based on this, there is only one way out for building a full-fledged Eurasian Union. And this way out consists in the necessity of passing through our heads through ourselves an important thought: it’s impossible to build from above. If you start installing the roof without having a clear plan in front of you, remembering that first you had to lay the foundation, then the building will turn out to be quite short and very unstable. Examples of such scanty “buildings” in stories a dime a dozen, and start building another one - just no need. But to think about the architecture in the "bottom-up" style - is another matter. The unity of people is the best reason for the unity of states. Another question - will they go for this unity? Is it in the interests of supreme politicians? In general, there are an order of magnitude more questions than answers.

Ctrl Enter
Noticed oshЫbku Highlight text and press. Ctrl + Enter
We are
Situational analysis of the death of the MH17 flight (Malaysian Boeing 777), made on the basis of engineering analysis from 15.08.2014Eurasian Union: a look into the future
220 comments
Information
Dear reader, to leave comments on the publication, you must to register.