The most modern tank on the most dangerous border: a report from the border with the Gaza Strip

October 1 2013
475
“Now the approach has changed. When we are fired at with rockets, we do not back up, but attack and respond with fire. Gaza knows that we are here, they are familiar with our capabilities. Gaza is a very vulnerable place for Israeli fire, and we have a list here goals like the Air Force has. Tanks armed and ready for battle, just like we are. "Tankers of the 401th brigade are well aware that the calm on the border with the Gaza Strip that has remained since the Pillar of Fire can explode at any moment. It looks like one day from their daily service. 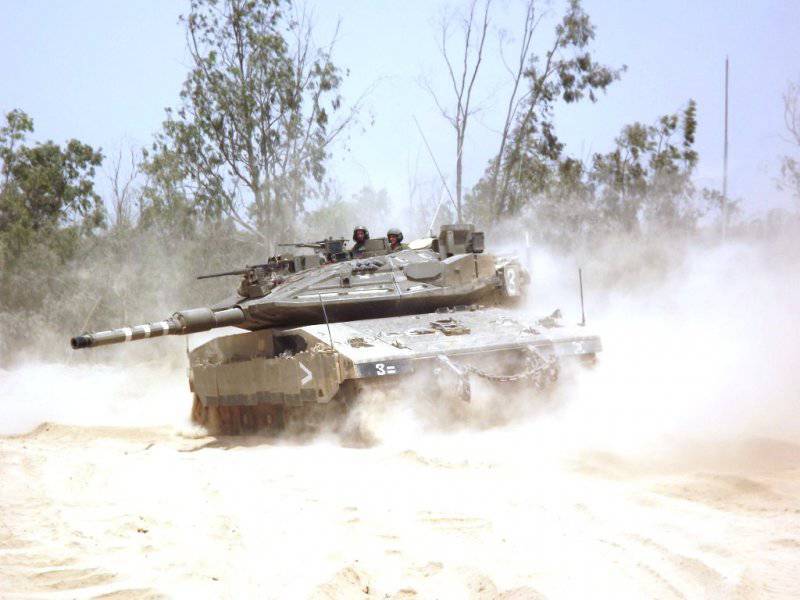 Tank Merkava 4 on the border with Gaza. "In full combat readiness"

It has been seven months since the end of the operation Cloud Pillar. Just seven months, and it seems that the border with the Gaza Strip has become one of the most peaceful in Israel, although everyone knows that invisible lava boils below the surface. Last month, fighters of the 401 Brigade began to guard the border with the Gaza Strip after they completed large-scale brigade exercises. They fell into a deceptive reality, calm on the one hand and raging on the other. The seemingly quiet border is not at all, and most of the incidents, even minor ones, do not receive the attention of the press. Only in January, a tunnel was discovered near the security fence, in March, forces from Gaza violated imaginary calm by firing a rocket in the direction of Ashkelon, and also fired at the vehicle of the northern district commander Colonel Ofer Winter. In April, an improvised explosive device was launched at the border near the D-9 bulldozer, another border violation was committed in May, and this incomplete list does not include unsuccessful attempts to launch rockets, fire from small arms weapons and demonstrations at the border.

All these incidents have to be dealt with by the fighters of the 401 Brigade, an armored brigade armed with the Merkava 4 tanks. It is on them that Tsakhal is counting on in the event that the conflict breaks out with a new force. As the tanker officer told us: "The army understands that this is the most dangerous border, despite the situation on the Golan Heights and therefore has placed here the most modern and protected tanks we have." 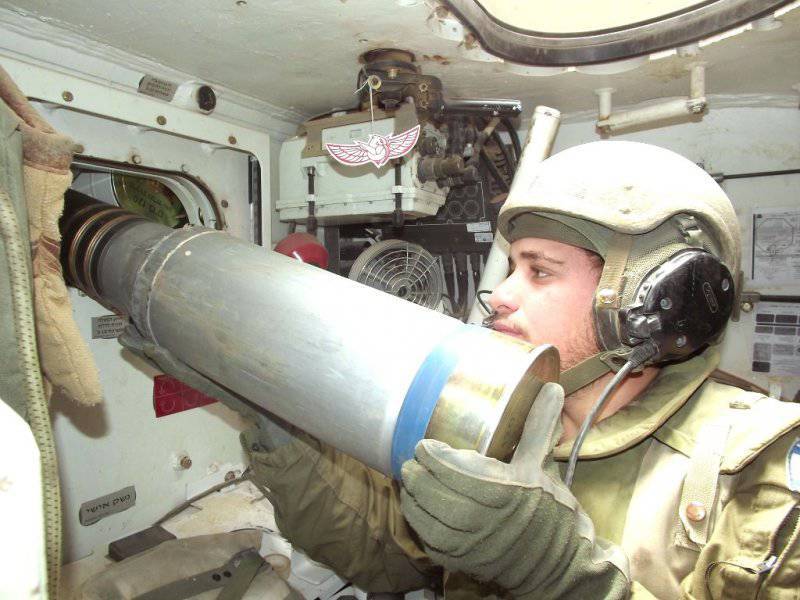 "When we are fired on with rockets, we do not back up, but we attack and fire with fire." Crew tank in action.

This week (18 of June 2013 of the year) I went to Gaza to meet with the crew of the brigade’s tank to look at Gaza with their eyes and hear their impressions of the situation directly from their seats - a situation for many in Israel that seems like a real utopia. I happened to meet an interesting and cohesive team, a platoon commander living in a settlement in the West Bank, a proud farmer from the agricultural village of Nahalal, a new immigrant from Brazil and another fighter living near Netanya. All of them are proud of their service and everyone is aware of the meaning of service on the border with the Gaza Strip.

"We moved from defense to attack"
The 401 Brigade has a long tradition of roots leading to the Six Day War. Since then, she has participated in all wars and conflicts. This brigade and the ninth regiment to which the tank crew I was assigned is assigned, entered into history having carried out in combat conditions the first interception of the anti-tank guided missile released on the tank. "We are the first company to receive a Windbreaker (KAZ Trophy) and a company that intercepted the first missile," said Lieutenant Ariel Hoffman (אריאל הופמן) from the village of Carmey Tzur. "You realize the capabilities of this tank and its strength. It is necessary to understand that thanks to all tank systems including the Windbreaker it has the ability to fire very quickly. In this tank with an active defense system, along with the secret systems, the approach changed and we went from attack to attack. When we are fired at with rockets, we do not back up, but we attack and fire with fire. In Gaza they know that we are here, in the end they have intelligence and observers and they understand that we are here. They are more or less familiar with our capabilities E. "

I met the crew of Lieutenant Hoffman after they returned from a long ambush where, using the means of observation, they watched what was happening in the depths of Gaza. They live in this area and, unlike us, feel calm before the storm. "Very quiet, on the other hand, you see everything, you also know what is happening on the other side of the fence. I can tell you how we are watching the militants in the sights and it is especially difficult for us to tank crews. Our tanks are armed and ready to open fire at any moment "But we understand the complexity of the situation and maintain a lull. In the end, we protect the inhabitants of the south of the country, and when everything is calm, it’s clear to us that everything’s calm. That’s our task."

The command of the Gaza division knows that in its hands is the most modern tank ready for any situation. The equipment of the tank, up to the armor of the vest, is in an accessible place, the crew is able to get its tank in a matter of minutes where it should appear. They carry out the opening of routes, long ambushes and the most serious challenge is to maintain combat readiness. That is what Lieutenant Hoffman works tirelessly. "This constant tension at the end may explode. This is the main challenge." 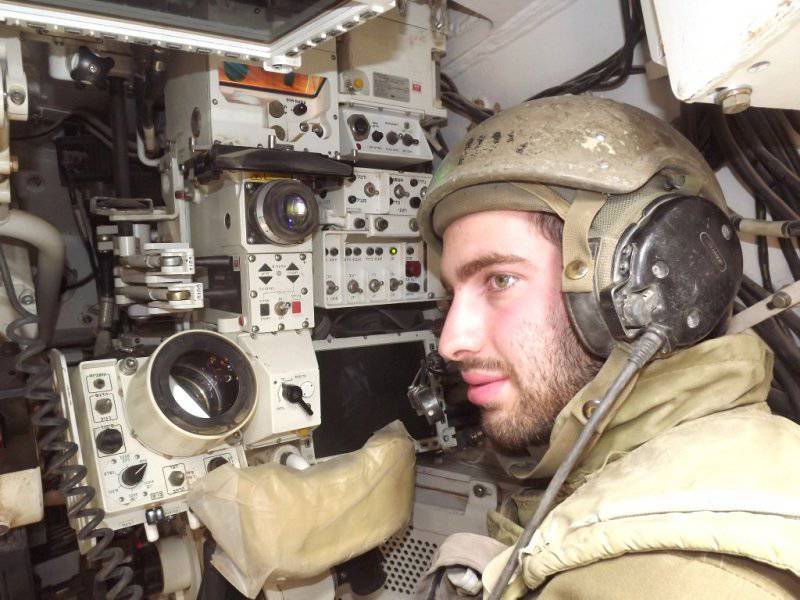 "This constant tension at the end may explode." An inside look.

Work in Gaza is integrated with other forces (integrated combat group), which includes, in addition to tank battalions, engineering, infantry, artillery units, UAVs and other means prohibited for publication. "We know how to interact with everyone here. It works well, and we constantly work on it. Before each ambush, we conduct joint exercises that include the techniques of our other forces."

“Two weeks ago, the D-9 bulldozer hit an IED and a bucket flew off,” recalls Lieutenant Hoffman. "We had a week of mortar attacks and other events that were not reported and this is what makes the tank crew here ready for anything. Gaza is a very vulnerable place for Israel’s fire, and we have here a list of targets like that of the Air Force. in the end, with armored firepower, we can use it instantly. However, it is important to note that the return fire of the tank can affect the status quo in the Gaza Strip. "

“This weapon is frightening with its capabilities. When something happens at the border, they call us to bring order”

They are the generation of high-tech in the most modern technology and this is what immediately catches the eye when you climb into the tank. Everything is computerized and controlled by pressing a button. There is no longer a need for a muscular loader and the driver should not strain his neck to stick his head out or strain his eyes to see well. Corporal Michael Balisiano (מיכאל בליסיאנו) was recruited into the army a year and a half ago after he came from Brazil. He shows me the driver's seat of the tank, and again the screens are striking. "To drive such a tank is just a thrill, especially since I do not have a driver's license for a car," he says with a smile. "We do a lot of ambush here and take various firing positions. The job is not easy, but interesting. Actually, as a driver, I sleep most of the time because everyone needs a vigorous driver. So I'm not complaining."

The tank is fully automated and very easy to use. "In addition, we have a computer that displays all the information, from electrical faults to the remaining amount of fuel. The speed switch is like in a car and it is very convenient. There are also thermal imaging cameras, so for me that day, that night - without the difference. " 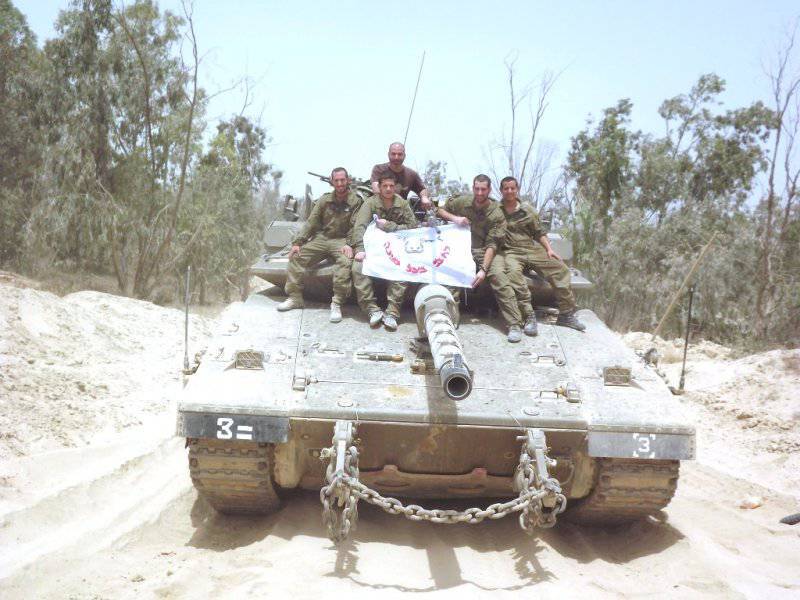 "This is a great feeling, we protect our citizens"

Sergeant Dotan Lavi (דותן לביא), charging the tank, always emphasizes that first of all he is proud that he is a farmer from the village of Nahalal. He joined the crew after almost 2 of the year served in the Magellan unit. "My duties include loading cannon shells and controlling a machine gun. Through the computer I control the communication system and all this with one click of a button. In ambush, I scan the area with a special device I cannot tell about and see everything." If in the past the loader had to use a small amount of physical force when charging projectiles and monitor what projectile he charges, then in the 4 Merkava everything is computerized. "I choose the type of projectile by pressing a button on the computer and after I click the OK button, the system itself gives me the projectile that I chose, a cell opens and from there I send the projectile into the barrel."

“After 20 days I’m going to pre-demobilization leave and I can say that I had a very interesting service,” Lavi says. This transition from Maglan to tank forces was very hard, I had to achieve this for a long time and I’m happy for every minute. Being a fighter here is much more interesting, the border is not simple, but it leaves a good feeling that we are protecting our citizens. "

Sergeant Saaru Papar (סער ר), the gunner, had to seek permission for a long time to return to the company after being wounded, and it was he who in the tank pulls the gun "trigger". "It is very important for my position that I perfectly familiarize myself with this area. I do this work from the tank in each ambush, and also physically visit the operational part of the observers in order to get better acquainted with the area and potential goals. There is always something to learn and I can say that I know the whole area as a souvenir. " 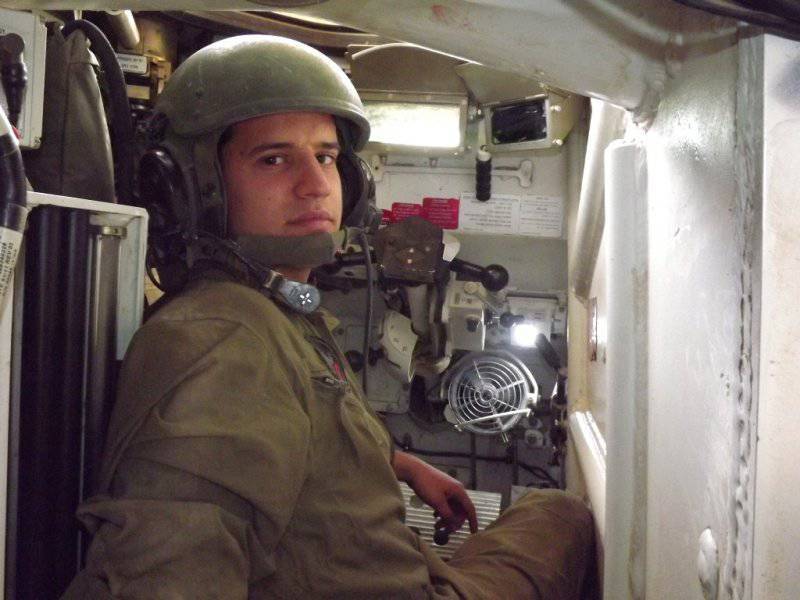 Peper adds that it is difficult to stay in a closed tank for so many hours, but their crew is very close-knit. "There are also our charms. For example, yesterday we brought a watermelon with ice into the tank. But seriously, I can say that before performing one of our tasks, we protected the territory, and in a few meters behind us a simple farmer plowed his land on his tractor. I can tell you that somehow the paratroopers who were here with us came up to me and said: “You really are fighters and you are doing your job.” In fact, a tank is an awesome vehicle. opportunities. When something happens at the border, ay us to clean up the mess. "

Ctrl Enter
Noticed a mistake Highlight text and press. Ctrl + Enter
We are
The commander of the armored forces of Israel no longer relies only on tanksReport from TsNIITOCHMASH. Part I. Weapons and ammunition
475 comments
Information
Dear reader, to leave comments on the publication, you must to register.