Syria agrees. Damascus confirmed its readiness to fulfill the requirements of the UN Security Council resolution 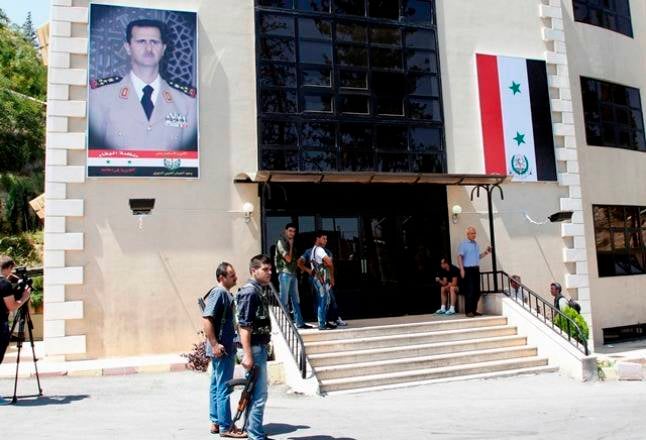 The Syrian government intends to adhere to the UN Security Council resolution on chemical arms. This was confirmed on Sunday by the president of the country. At the same time, Damascus still emphasizes that the resignation of Bashar al-Assad is out of the question.


Syria agrees to follow the requirements of the UN Security Council resolution. This was announced on Sunday by the Syrian leader Bashar Assad.

Earlier, Syrian Foreign Minister Walid al-Muallem told the same about this in an interview with NHK.

According to the minister, the Syrian government is carefully studying the content of this resolution, stressing that all countries must comply with the provisions of this document.

Recall, the resolution was unanimously approved by all members of the Security Council on Saturday night. "Historical The resolution adopted today is the first joyful event in a long time related to Syria. And in this regard, I especially want to note the efforts of Russian Foreign Minister Sergei Lavrov and US Secretary of State John Kerry, ”said UN Secretary General Ban Ki-moon after the vote.

The resolution commits Syria to destroy all stocks of chemical weapons, as well as to provide international inspectors unimpeded access to the country. The document condemns the use of chemical weapons in Syria, but does not place the blame on any of the parties to the conflict.

In addition, the document calls for the government of Syrian President Bashar Assad and the opposition, which has been trying to remove him from power for more than two years, to start a dialogue with a view to a political settlement of the conflict.

The resolution implies the use of force against Syria only if it does not fulfill the conditions of the Russian-American plan to eliminate chemical weapons. But even in this case, the UN Security Council will have to discuss and adopt a new resolution that will allow any sanctions against the country. It was this version that Russian diplomats insisted on.

However, not all were satisfied with the content of the document. So, his disappointment in this regard was expressed by Republican Senator, former US presidential candidate John McCain. In Russia, it was perceived, however, with a grin. “The dissatisfaction of J. McCain, one of the leaders of the“ war party ”, with the resolution on Syria is a sure sign of our success. We took into account the lessons of the war in Libya, ”wrote Alexey Pushkov, chairman of the State Duma’s international affairs committee, on his Twitter account on Sunday.

The Syrian leader stressed that Damascus does not intend to negotiate with the armed opposition in the framework of the Geneva-2, if it does not lay down its arms. “If the rebels are armed, then this is no longer the opposition, but terrorists. And we cannot hold discussions with terrorists, with al-Qaeda and its supporters, or with those who call for military intervention in Syria. If they lay down their arms, then we are ready for a dialogue with them, ”he added.

Earlier, the Syrian Foreign Minister said that his government is ready to take part in an international conference with the participation of representatives of the Syrian opposition without setting any conditions.

At the same time, he confirmed that Damascus still has concerns about the possibility of chemical weapons falling into the hands of insurgents. “After the militants used chemical weapons several months ago in Khan al-Asal (Syrian President Bashar), Assad thought about the dangers of this problem from the point of view of protecting the Syrian people,” said Muallem, quoted by RIA “News».

He admitted that it is difficult to get to some chemical weapons warehouses due to the fact that the militants control the roads leading to them. “This was one of the reasons Syria agreed to put chemical weapons under international control,” said Moallem.

The Foreign Minister also expressed regret that the UN does not take into account the evidence presented by the Russian delegation to the use of chemical weapons by militants.

The Minister also stressed that the issue of the early resignation of the current Syrian President Bashar Assad is not on the agenda. “Assad will remain the legitimate president of Syria until the presidential election, which will be held in the middle of 2014. No one should doubt this, ”said Moallem.

However, he did not answer the question whether Asad will take part in the upcoming elections.

At the same time, he sharply criticized the foreign opposition in the person of the National Coalition, which is supported by Western and several Arab countries. “She (the National coalition) fell in the eyes of the Syrians when she demanded that the United States strike at Syria,” he said.

According to the minister, this opposition was formed outside Syria under the leadership of foreign states. At the same time, he noted that the internal Syrian opposition defended national interests and should be represented at a conference in Geneva.

Ctrl Enter
Noticed oshЫbku Highlight text and press. Ctrl + Enter
We are
What did Mualem eat? The head of the Syrian Foreign Ministry actually called the United States and Syria allies
Military Reviewin Yandex News
Military Reviewin Google News
9 comments
Information
Dear reader, to leave comments on the publication, you must to register.