American professor: By the 2035 year, China will become a threat to Russia and America, and the powers will create an anti-Chinese alliance ("Huanqiu Shibao Newspaper", China) 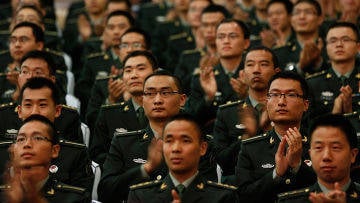 Now that tensions have arisen in Russian-American relations because of the incident with Snowden, the report, calling on Russia and America to rally against the “Chinese aggressor”, could not help but attract everyone’s attention. According to the agency article "RIA News”From 1 in August, Eduard Ponarin, professor at the HSE Department, on the same day, during the presentation of the analytical report“ The Russian Elite - 2020 ”, noted that the views of the Russian elite on the USA had undergone a significant transformation. In 1993, the top of Russian society was very friendly to America, but today the situation has changed dramatically. America is perceived as a threat to the security of Russia, but if a “common threat” hangs over these two countries, the elites of the United States and Russia can discover their common interests. “For this, some common interests or a common threat should arise. It so happens that interests are different and often contradict each other, ”the expert explained. William Zimmerman, a professor at the University of Michigan, who took part in the discussion, called everything by his own name, saying directly that such a “common threat” was China. Zimmerman said that by 2035, China would become a sufficient threat for Russia and the United States to join forces to fight the People's Republic of China, which should "extremely scare" China.


“Russian Elite - 2020” is an analytical report on the development of Russia in the period from 2015 to 2030, created with the help of the International Discussion Club “Valdai”. The club was created in 2004, the RIA Novosti news agency and the Council on Foreign and Defense Policy of Russia became its founders. The essence of the Valdai Club is to involve the most prominent world experts, scholars and representatives of political elites in a discussion about the role of Russia in the world. According to available data, the tenth meeting of the club will be held from 16 to 19 September. The above report was prepared just for this meeting. The participants of “Valday” are people who most vividly embody the trends of recent years.

The Interfax news agency notes that Western-style democratic values ​​are gradually taking root in the minds of representatives of the Russian elite, but the level of anti-American sentiment is growing faster among the elite than among the general population. Perhaps this process can no longer be reversed. The head of the Valdai International Discussion Club, Pavel Andreev, said that the transformation of the Russian elite is coming to an end, soon it will become completely different. Today, the ruling elite is sharply opposed to America, but it is not yet possible to predict how these views will change in the future.

The expert on Chinese-Russian relations, Xia Yishan (“Huanqiu Shibao”) of 2 of August, explained that in Russia there is a certain concern about the direction in which China will develop after becoming a mighty power. In Russia, China is not psychologically ready for the growth of China, and there is no corresponding theory. In Russian public opinion there is a pluralism of opinions, the media constantly publish various points of view. There is a certain number of supporters in the idea of ​​the “yellow threat”, but there are few of them. More and more people treat China favorably. However, it is worth paying attention to the fact that after the collapse of the Soviet Union, America had a great influence on the Russian intelligentsia. It got to the point that some of them even began to speak instead of American speakers, exaggerating and telling about the “yellow threat”. However, it should be understood that these people do not represent the views of the entire Russian intelligentsia. Xia Yishan added that almost none of the Russian experts he knew had raised the issue of a Russian-American alliance against China. The Russian public is much more concerned about the possibility of an excessive convergence of the United States and China, which can then completely rule the world.

But American experts have expressed thoughts about the Russian-American alliance against the PRC is not the first time. They often slander China, noting that he is now crushing the neighboring countries for himself, and also wants to seize Russian natural resources. Hence the conclusion that Washington and Moscow should join forces and put an end to the growth of Chinese influence in Asia. In his essay, published in the journal Foreign Affairs, senior researcher at the Center for New American Security Robert D. Kaplan suggested that the political ambitions of modern China are not much different from the claims of the United States a hundred years ago. The balance of power in Asia is now shifting, and not in favor of America. This leads to the fact that the United States, currently a hegemon in the western hemisphere, is trying to prevent China from becoming a hegemon in most of the eastern hemisphere. Further Kaplan writes that in order not to yield to China, the United States can conclude a strategic alliance with Russia. As for Russia, it may well accept such an offer, because China is now allegedly conducting a unhurried seizure of poorly populated territories of the Far East and Siberia with the help of its settlers; Chinese companies are also gradually “leaking out” there.

In the same article in Foreign Affairs, it says that Russia, like many other countries, believes that the rise of China fell on the decline of the United States and the entire Western world. Because of this, Russia began to focus on the East. Moscow emphasizes that its goal is cooperation with China, and not competition at all. Alexander Larin, a leading researcher at the Institute of Far Eastern Studies of the Russian Academy of Sciences, is convinced that China-US relations have only two options for development: either competition and conflict, or the organization of some form of joint territorial management. For Russia, caught up between China and the United States, it will be most reasonable to maintain neutrality.