October 1 2013
12
7 November 1974 at a military parade in honor of the 57 anniversary of the October Revolution for the first time was widely demonstrated a new model of the Soviet rifle weapons - 5,45-mm AK-74 machine gun for small caliber cartridge. By this time, the development work on the creation of the 5,45-mm Modern miniature submachine gun, designed to equip grenade launchers, crews and crews of armored vehicles and other units, to replace the APS pistol was already opened.


The use of a new low-impact ammunition promised a number of significant advantages, the main of which were a noticeable decrease in dispersion when firing, an increase in the range of a direct shot, a reduction in the mass of weapons and portable ammunition. Calculations showed that, along with an increase in the tactical and technical characteristics (TTH) of a full-sized army sample, the new cartridge allowed the creation of compact small-sized automatic weapons, in which servicemen of auxiliary and technical units, whose number was constantly increasing in the army, were in urgent need. The possibility of creating such a model was justified in the 60-s experts TSNIITOCHMASH. A prototype of the light AO-46 small-sized automaton was also created under the chambered 5,45x39 mm for research and testing. In 1973, development work was started on the creation of an 5,45-mm Modern machine-sized miniature machine for the tactical and technical requirements of No 008407. In accordance with the tactical and technical requirements (TTT), a small-sized machine designed to arm grenade launchers, crews and crews of armored vehicles and other units (instead of the APS pistol), had to provide the ability to conduct automatic and single fire, have a weight not exceeding 2,2 kg, length butt spread out no more than 750 mm, with a folded butt not more than 450 mm, sighting range of shooting up to 500 m. 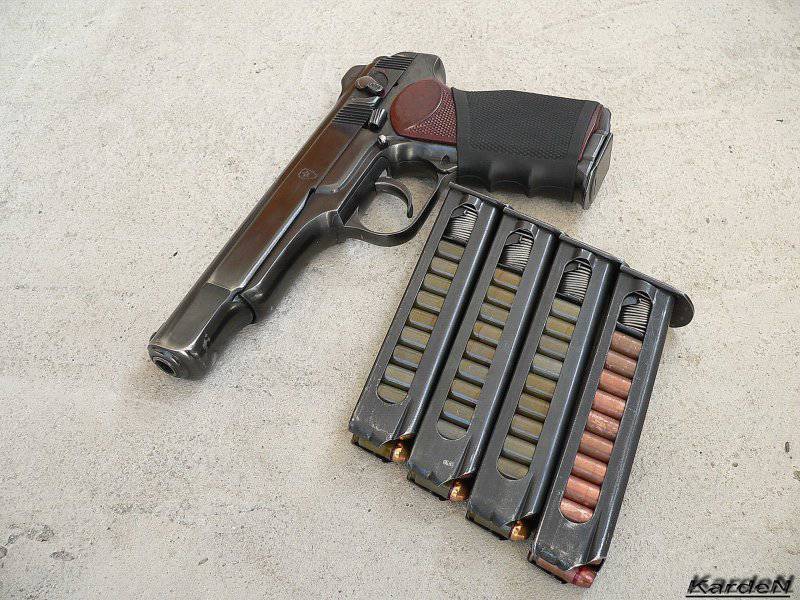 The gunsmith designers M.T. Kalashnikov, S.G. Simonov, S.I. Koshkarov, A.S. Konstantinov, I. Ya. Stechkin began to work on the creation of a small-sized automaton on a competitive basis.

Under the guidance of S. G. Simonov, an AG-043 venting machine with a mass of 2,1 kg (without cartridges) was developed with a metal sliding shoulder rest. The length of the weapon with the butt in the combat position was 680 mm, in the traveling - 420 mm.

The Kovrov machine gun, S. I. Koshkarova, and A. S. Konstantinov, AEK-958, also had gas-automatic equipment, stores on 20 and 30 cartridges, and a folding butt.

In Izhevsk, the new 5,45-mm machine gun А-3 (АК-74), the development of which was nearing completion, became the basis for "Modern". The length of the base of the base sample was reduced to 255 mm, the design of the vapor section, the sight, the receiver cover was changed, the length of the gas piston rod decreased. To reduce the muzzle flame, a cylindrical muzzle was designed. The metal butt folded up. In the process of further development, the Izhevsk automatic received a side-folding butt, the barrel was reduced to 206 mm, which, however, still did not allow to fit into the framework of the requirements of the tactical and technical specifications (TTZ).

TKB-0116 machine gun The designer of the Tula TsKIB SOO (now the branch of the State Unitary Enterprise “KBP”) I. Ya. Stechkin presented the most original sample for the competition. The 5,45-mm small-sized TKB-0116 machine gun had an automatic with recoil of the barrel during its short course. At the end of the rollback, the barrel transfers energy to the shutter, accelerating its movement. The shutter is rigidly connected to the bolt carrier. Locking the barrel is made by turning the barrel in the extreme forward position, with the protrusions on the barrel engage with cut-outs of the bolt carrier.

The trigger type trigger mechanism allows single and automatic fire. Removable modular device simultaneously performs the functions of a booster recoil, brake-compensator, flame arrester and reduces the sound level when firing. The liner is reflected upwards through the lid-closed extraction window, which automatically opens when the slide frame is moved. 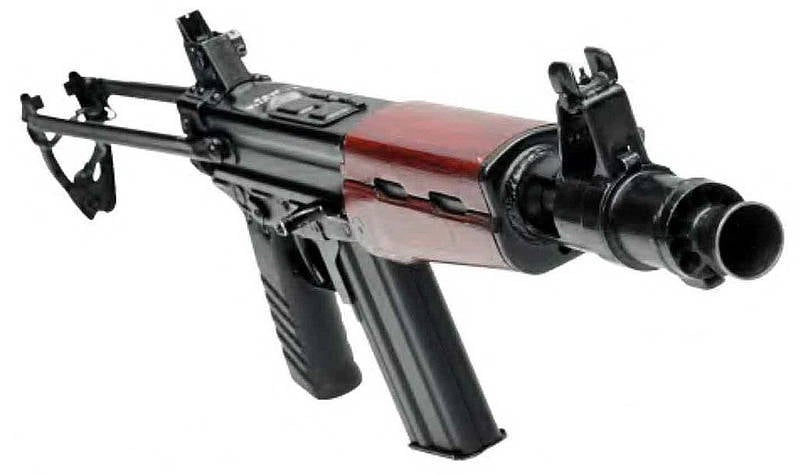 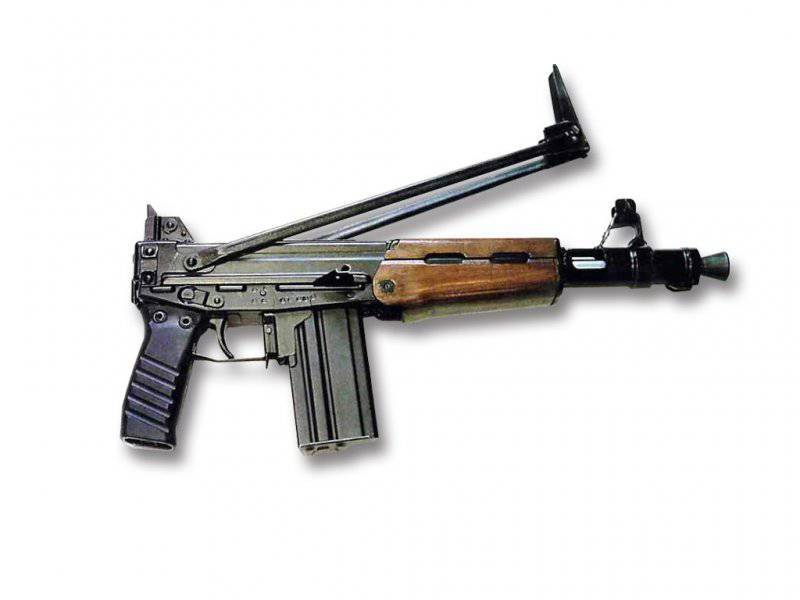 The mechanical sight has settings for shooting at a distance of 100, 400, 500 m and “P” (constant). The supply of cartridges is carried out from box stores with a capacity of 20 and 30 cartridges.

Characteristics of the machine TKB-0116

At the comparative ground tests of 5,45-mm small-sized machines, created in the framework of the competition "Modern", which were held in 1976, were presented TKB-0116 I. Ya. Stechkina, PP-1 M.T. Kalashnikova and AEK-958 C I. Koshkarova. Tests revealed the leaders who became automata from Tula and Izhevsk. The TKB-0116 small-sized machine gun had a smaller mass and length with a folded butt, better accuracy of fire. An important advantage of TKB-0116 was a lower sound pressure level when fired, which significantly increased the comfort of using the weapon and, as a result, the effectiveness of shooting.

Created on the basis of the mass-produced AK-74, the automatic PP-1 showed, as expected, higher reliability than the TKB-0116, reliability of operation and survivability of parts. The decisive argument in favor of the PP-1 compact machine was its high degree of unification with the AK-74 adopted, and the Izhevsk model, after revision, was sent to military trials by the decision of the NTS section of the Ministry of Defense Industry. Small-sized machines TKB-0116 and AEK-958, it was decided to finalize and submit for testing in the scientific research institute 61. In 1977, the small-sized TKB-0116 and AEK-958 submachine guns were tested, as a result of which it was decided that, compared with the small-sized PP-1 submachine gun, which by that time had passed military tests and was recommended for use, they They have no significant advantages and it is not advisable to further refine them.

The automaton created in Izhevsk under the symbol AKS-74U (6P26) was put into service and 1980 began to enter the troops, and then to arm the staff of the Ministry of Internal Affairs. Its mass production was deployed at the Tula Arms Plant. 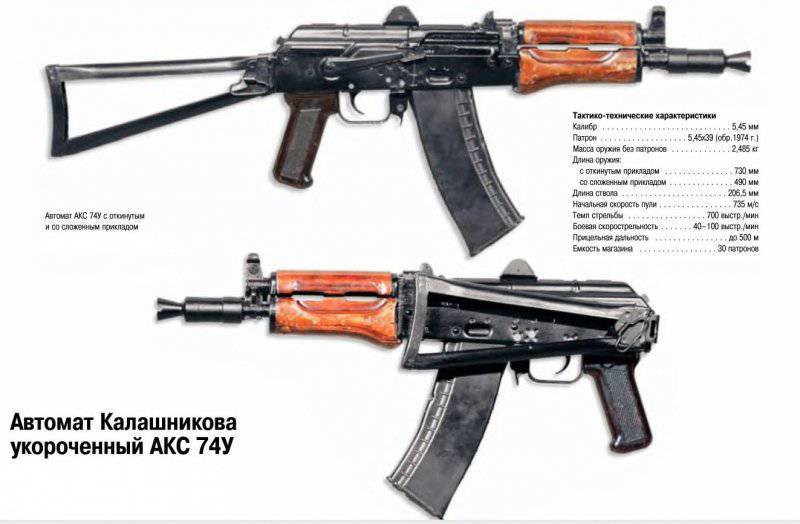 Today it can be stated that the AKS-74U machine gun, which became the winner in the Modern contest, is one of the best samples in its class in the world, but nevertheless, another attempt to create an effective self-defense weapon for servicemen technical branches of troops and auxiliary units cannot be recognized as 100% successful. If in the first case the automatic pistol turned out to be too demanding to qualify the shooter and was ineffective in the hands of conscripts, then AKS-74U, while ensuring sufficient efficiency and firing range, does not fully meet modern requirements for mass and dimensions of an individual defensive weapon. The quest for the perfect PDW weapon continues.