30 September 2013
119
On September 22, a military parade was held in Tehran to mark the 33 anniversary of the start of the Iran-Iraq war. Traditionally, this parade has become a pretext for the demonstration of new weapons and military equipment. The Iranian military showed the 12 missiles of the Sejjil model and the 18 Ghadr missiles. Exact modifications of the products shown are not yet known. According to reports, both missiles have a range of about 2000 kilometers. The demonstration of such missiles at a recent parade confirms not only the fact of the existence of the relevant Iranian projects, but also the presence of at least small-scale production of ammunition. All together, this speaks of Tehran’s intentions in strengthening the military power of its armed forces. 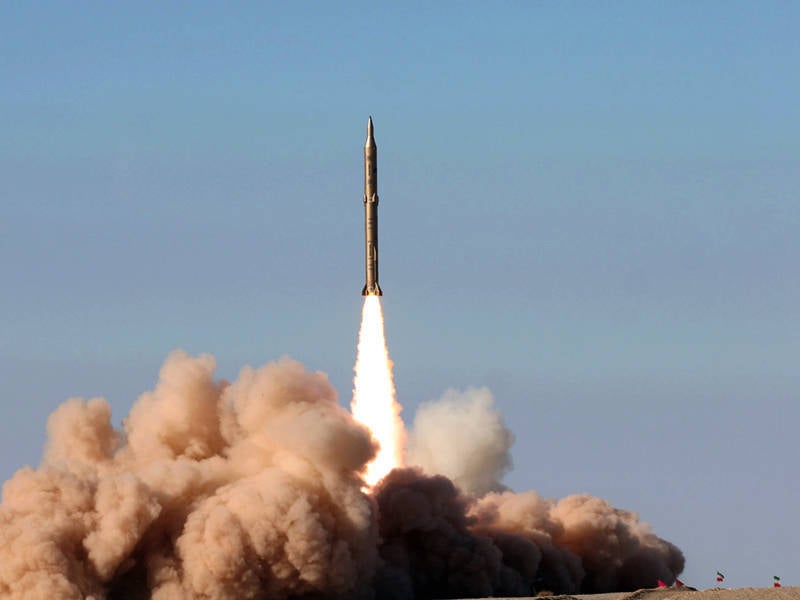 Iran began to develop its rocket technology in the eighties of the last century. The reason for the start of active work in this direction were some tactical nuances of the war with Iraq. A number of important targets in Iraqi territory turned out to be inaccessible to the Iranian armed forces. To accomplish such tasks, Tehran initiated the development of new ballistic missiles of various classes. Great help from Iranian scientists and designers was provided by specialists from China and North Korea. These countries, possessing some of the necessary technologies, shared them with Iran, thanks to which Iranian specialists were able to create several new projects.

Currently, the Iranian armed forces have several types of ballistic missiles of several classes that can hit targets at a distance of several tens to several thousand kilometers. According to reports, if necessary, Iranian rocket engineers can attack targets located at a distance of 2500 kilometers. Due to the geographical and political characteristics of the region, this range makes Iranian missiles a strategic weapon.

Iran maintains a strict secrecy regime in all that relates to its missile weapons. About the existence of new missiles it becomes known only some time after their tests or adoption. The number of manufactured products is also a state secret and is not subject to disclosure. As a result, foreign countries need only to make assessments on the basis of available information, expediency, etc. data.

The most advanced of the currently known Iranian missiles is the Fajr-3. This medium-range ballistic missile uses fluid engines and is capable of flying at a distance of at least 2000 kilometers. According to some sources, the Fajr-3 rocket has a range of up to 2500 km. Like other medium-range ballistic missiles, the Fajr-3 is equipped with an inertial guidance system. The payload of the rocket consists of three warheads with individual guidance. It is known that in the middle of the last decade, Iran conducted several test launches of the new Fajr-3 rocket. By now, obviously, the new rocket has been adopted and is being mass-produced. The number of assembled products of this model is estimated at several dozen and is unlikely to exceed 100 units. However, continued production can significantly increase the number of such missiles on duty and in warehouses. 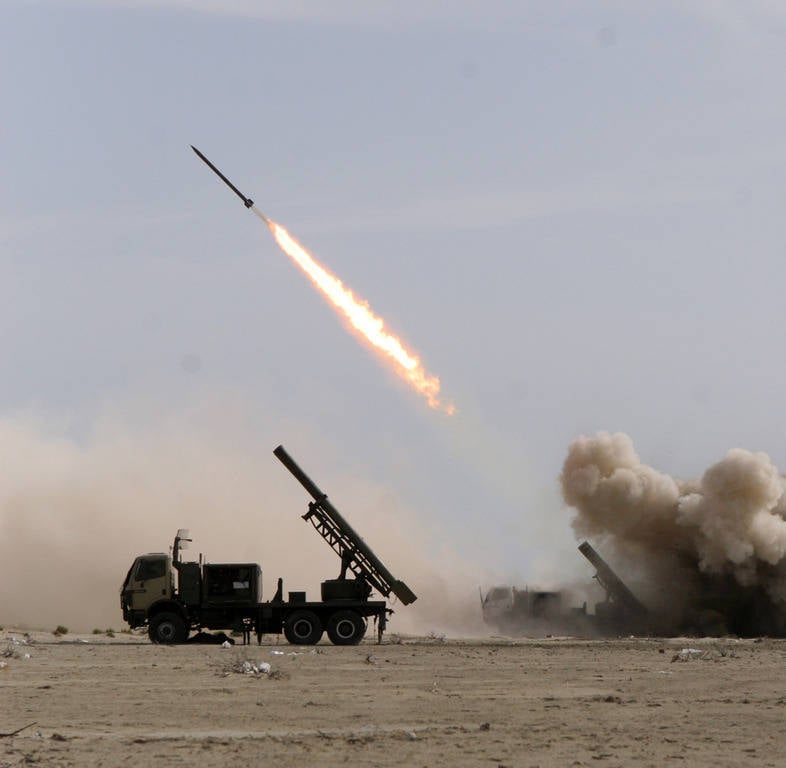 At the recent parade, the Sejjil and Ghadr missiles were demonstrated. There is every reason to believe that this year the Iranian military showed rockets models Sejjil-2 and Ghadr-110, representing the further development of old projects. Not much is known about these two rockets. According to reports, the Sejjil-2 and Ghadr-110 are capable of hitting targets at ranges up to 2000 km. With comparable dimensions and starting weight, these two missiles differ from each other in technological terms. So, the Sejjil family of rockets is equipped with a solid-propellant rocket engine, and the Ghadr-110 ammunition has a combined composition of engines: the first stage is made solid-fuel, and the second one has liquid engines. The reasons for the difference between the missiles relate to industrial and technological issues. Both missiles with a range of about 2000 kilometers carry one-piece combat units. 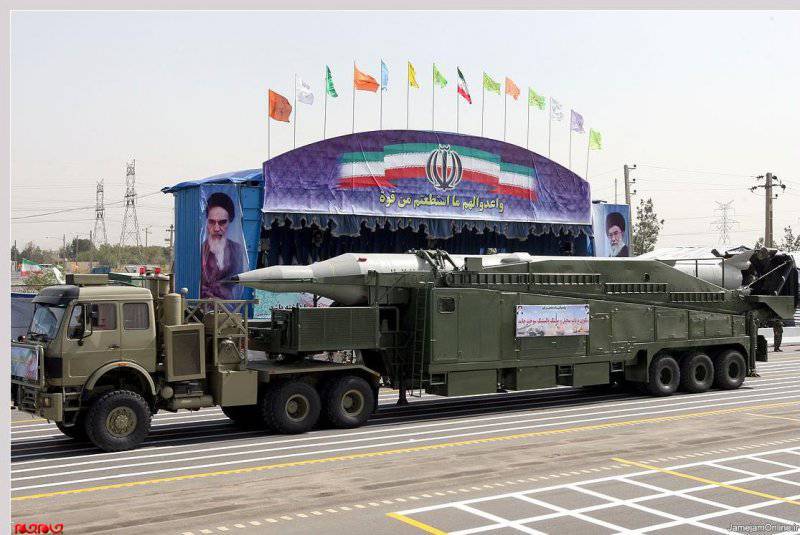 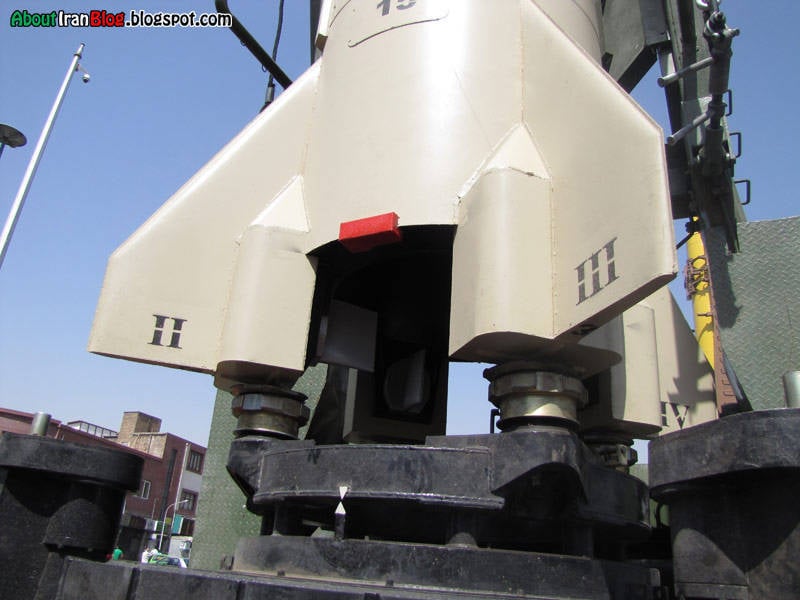 The medium-range ballistic missile Sejjil-2 is directly related to the Sejjil-1 project. Earlier it was reported that the Sejjil-1 rocket, having a slightly larger size and weight in comparison with the Sejjil-2, can deliver a warhead to a distance of 2400 km. Tests of a rocket with such high performance began in the 2007-2008 years and probably ended in success. At the same time, it cannot be excluded that, for whatever reason, the Iranian armed forces did not begin to adopt the missile in its present form and requested its modernization. In addition, there is every reason to believe that the Sejjil-1 and Sejjil-2 missiles were developed simultaneously in the framework of the same project. The fact is that between the first test launches of these missiles took about six months.

The immediate predecessor of the Fajr-3, Sejjil and Ghadr-110 missiles is the Shahab-3 project. The ballistic missile of this model is equipped with solid-fuel and liquid-propellant engines, which allows it to deliver a payload weighing less than one ton over a distance of 1900-1950 kilometers. According to reports, the Shahab-3 project is an Iranian processing of the North Korean Nodong-1 rocket. Over the past 10-12 years, Iranian designers have created several modifications of the Shahab-3 rocket, differing from each other in certain nodes, aggregates and characteristics. So, the latest versions with the Shahab-3C and Shahab-3D indexes carry up to five warheads with individual hoverings weighing about 280 kg. Like other Iranian medium-range ballistic missiles, the Shahab-3 is equipped with an inertial guidance system.

It should be noted that the Shahab family of ballistic missiles began with short-range ammunition. In the late eighties, the Shahab-1 and Shahab-2 missiles were created. During the modernization of these missiles, Iranian designers managed to bring their range to 1000 km (Shahab-1) and 750 km (Shahab-2). Some sources claim that the first Shahab missiles were created on the basis of technologies obtained in the study of P-300 missiles (an export version of the P-17 missiles) of Soviet production acquired through third countries. Information is also available on cooperation with the DPRK. Over the years of production, the Iranian defense industry has manufactured several thousand Shahab-1 and Shahab-2 missiles. Some sources claim that the troops still have a certain amount of such ammunition. 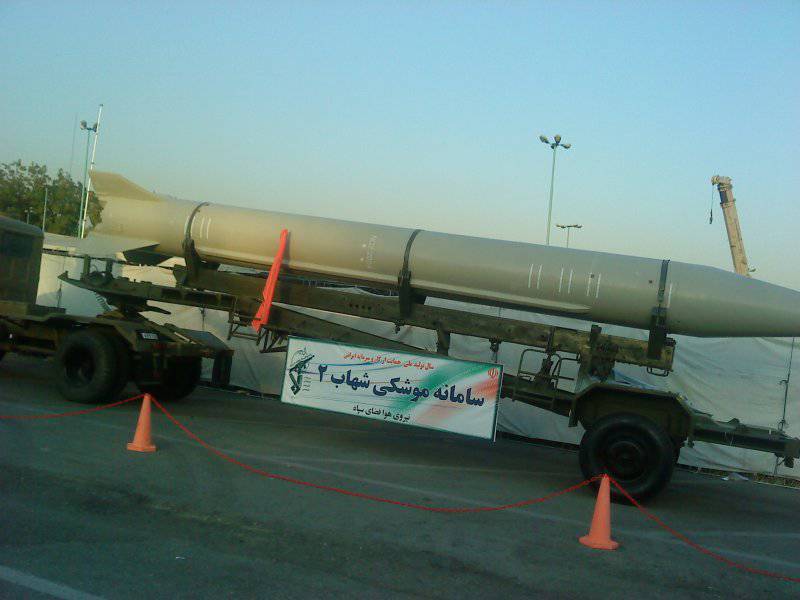 As you can see, in recent decades, Iran has been actively engaged in the creation of short and medium-range ballistic missiles. At the same time, the Iranian industry achieved the greatest success only in the two thousandth years, starting mass production of several types of missiles with similar characteristics. Simultaneously with the development of ammunition suitable for deterring a potential enemy in the conditions of the Middle East region, Iran was engaged in projects of ballistic missiles for operational-tactical missile systems. A characteristic feature of this part of the Iranian missile program is its emphasis on the use of liquid engines: the overwhelming majority of solid-propellant missiles were not equipped with any control systems and were intended for firing at areal targets without precise guidance. Probably the reason for this are the Soviet developments (first of all, the 9K72 “Elbrus” complex with the P-17 / P-300 rocket), which are the “roots” of North Korean and Iranian ballistic missiles. 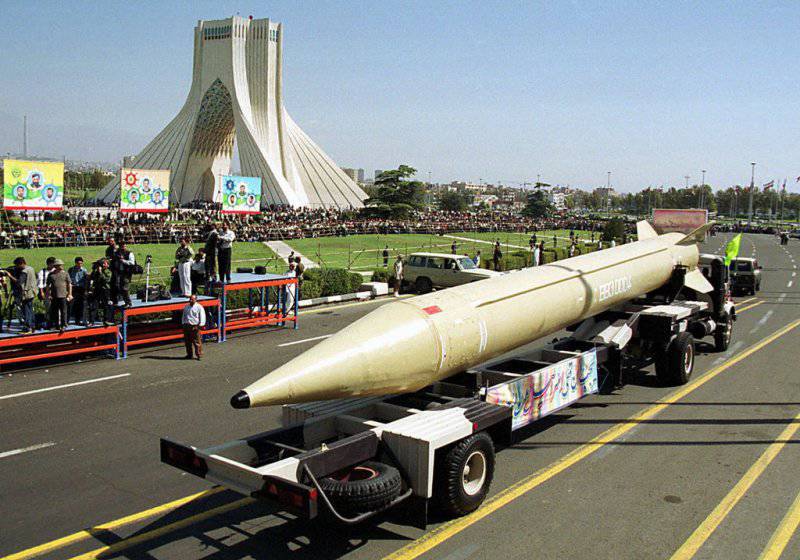 For quite a long time, it was supposed to use unguided rockets and Shahab-1000 or Shahab-1 missiles to attack targets located at a distance of no more than 2 kilometers. Due to the inadequate characteristics of obsolete missile systems in the late nineties, Iran launched a new project, the purpose of which was to create new short-range ballistic missiles and operational-tactical purposes.

In September, the 2002 of the year passed the successful tests of the Fateh-110 rocket with a range of up to 200 kilometers. The rocket of the first version was equipped with an inertial guidance system and could deliver a monoblock warhead to the target weighing about 650 kg. In the future, announced the creation of new versions of the rocket with higher performance. In 2012, the Iranian military told about the existence of the Fateh-110-D1 rocket with a range of up to 300 kilometers. As stated, thanks to the use of inertial and optical-electronic guidance systems, the latest model of the missile surpasses all previous developments in its accuracy indicators. In addition, the Fateh-110 became the basis for the Khalij Fars anti-ship ballistic missile.

Another missile, designed to replace the old short-range ammunition, is Qiam-1. The start of work on this project became known in the middle of 2010. Then it was reported that Iran is already in full swing developing a new liquid-propellant rocket. According to reports, the Qiam-1 ballistic missile is capable of delivering an 700-kilogram warhead over a distance of 750 kilometers. In 2011, the Iranian Ministry of Defense announced the ordering of the first batch of new-type production missiles. At the present time, the full-scale production of short-range missiles is probably underway, which are gradually replacing similar-purpose ammunition in the military. 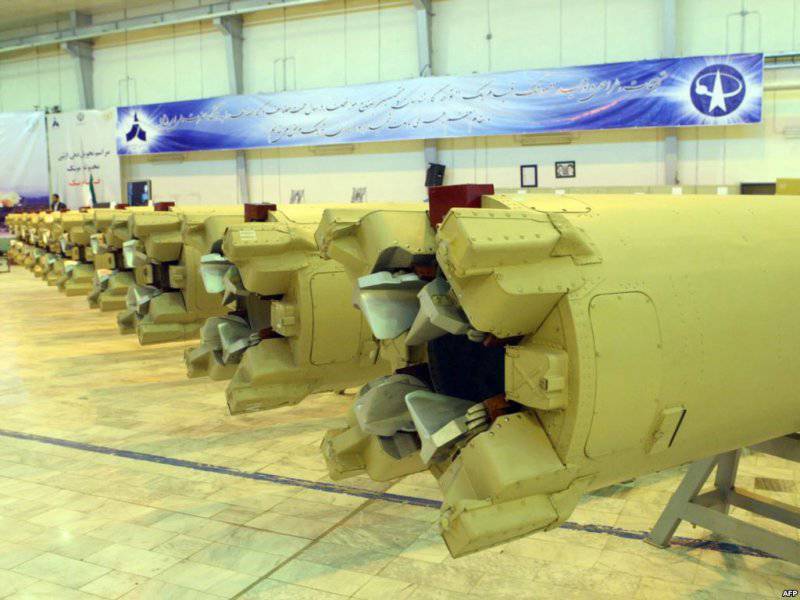 It is easy to see that the Iranian ballistic missiles developed in recent decades make it possible to hit targets in a sufficiently large range of distances. Nevertheless, a number of features of Iranian missiles complicate their operation. There is information about the lack of technology in Iran, allowing to keep for a long time liquid rocket on duty. Because of this, putting a rocket on duty and removing it from it is accompanied by several long and laborious procedures, which accordingly affects the combat capability of the rocket forces.

Operational problems of liquid rockets at the current level of technology development in Iran can be solved only by switching to solid-fuel engines. Capacity, in turn, can be provided with a sufficient number of missiles. In this case, you can create a convenient mechanism for setting up missiles on duty, removal from it and maintenance, without harming the overall combat capability of the troops. Judging by the available information, the Iranian armed forces are actively using both of these methods to improve the status of rocket forces.

The Iranian Ministry of Defense does not disclose numerical indicators of the armament of the rocket forces, which does not allow an accurate assessment of their overall potential. In this regard, it is necessary to manage only approximate estimates. So, with respect to the missiles of old models (Shahab-1 or Shahab-2), the number of several thousand units is often called. This assumption is associated with the tactical objectives of the missiles and the peculiarities of their use. For the same reasons, the number of medium-range missiles can be estimated from a few dozen (Ghadr-110, Sejjil-2 or Fajr-3) to several hundred (Shahab-3 or Fateh-110).

Iran’s ballistic missiles make it possible to “hold on sight” a large area around the country. Missiles with a range of about 1000 kilometers when launched from Iranian territory can attack targets in Afghanistan, Pakistan, the Middle East and Transcaucasia. Shahab-3 or Fajr-3 rockets, in turn, can hit targets in India, Northern and Eastern Africa, Central Asia, Russia and Eastern Europe. Thus, having such weapons, Iran now claims to be the regional leader. Considering the situation in the Middle East, it can also be assumed that Iranian ballistic missiles are one of the instruments for maintaining stability in the region. Despite the difficult political situation and several recent wars, this weapon can eliminate aggression, the result of which could be a large-scale armed conflict in the entire Middle East.

Ctrl Enter
Noticed oshЫbku Highlight text and press. Ctrl + Enter
We are
Missile attack on Europe: myth or reality?The history of the Iraqi Navy. Part of 2. Iran-Iraq War at Sea (1980-1988)
119 comments
Information
Dear reader, to leave comments on the publication, you must to register.