Each of us can help flood victims in the Far East

29 September 2013
186
All of us for a long time (about two months) continued and continue to monitor what happened and is happening in the Far East. Hundreds of settlements of the Amur and Magadan regions, the Jewish Autonomous Region and the Khabarovsk Territory were in the grip of the dispersed element. Thousands of families lost their homes, homesteads, lost crops, vehicles, their property, for the acquisition of which many had to work all their lives. Together with the houses that went under the water, the hope for the future also disappeared. Psychological trauma was sometimes stronger than even the physical suffering that people had to endure, driven by the elements into a real water trap. 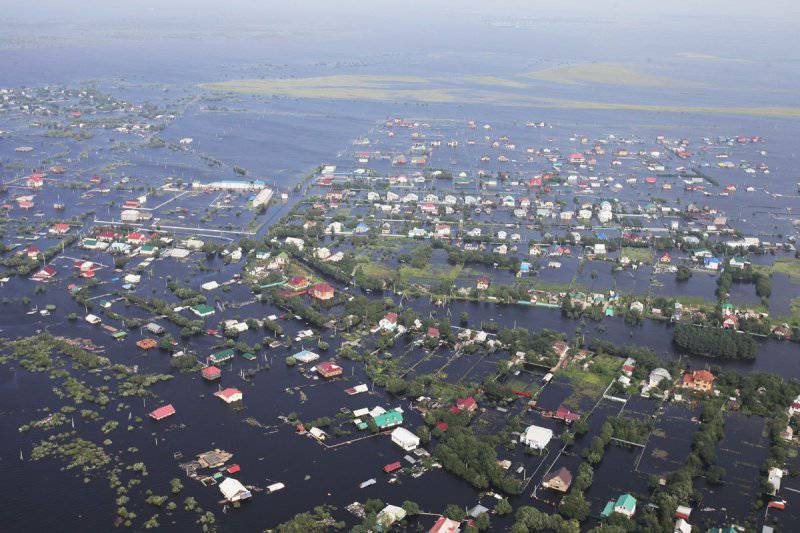 We didn't miss news TV channels, with the hope that the big water will recede from this huge region, that the Amur will finally pacify its waters. But the Amur and other rivers of the region for a long time not only did not recede, but also exacerbated the situation with new rises in their levels. Real heroism in confronting the elements was shown not only by the servicemen and fighters of the Ministry of Emergency Situations, but also by ordinary residents of the region, who helped to equip improvised dams, pump out water from flooded entrances, and hosted those people who had lost their homes and livelihoods.

Today, the element recedes. In some regions, the situation of emergencies has been removed, and everything seems to be going for the best. But the retreating water leaves behind itself literally mountains of problems: lop-sided and completely damp residential buildings, medical institutions diverging at the seams, retail outlets, blurred highways and railway embankments, hundreds of tons of worn-out furniture, corpses of domestic animals, fallen trees, technical and household waste.

Most of the people whose homes were in the flooding zone do not have the opportunity to return to them, since the housing needs either full-scale repairs or urgent demolition with replacement with a new one. At the same time, it is necessary to understand that now is the end of September, and this means that within a few days the water that has not completely come down in the region can ice over hundreds of settlements, which finally paralyzes the restoration work. While the weather makes it possible to carry out at least a partial drying of the premises that have survived the elements. The weekly forecast for Khabarovsk is as follows: from September 30 to October 6 - both during the day and at night, plus temperatures reaching + 20 Celsius (during the daytime). In Komsomolsk-on-Amur and Blagoveshchensk, the situation is similar in a similar way. In Birobidzhan, from mid-week meteorologists predict frosts to -3 degrees at night, but then to October 11-12 in the autonomous region the positive temperature will again be established.

The weather, which yesterday showed the conquest of the whole region, today gives a small chance for the restoration work at least on the most important sites to be held at a decent level.

Today we will not discuss the issue of what has become the real reason for such a large-scale flooding in the Far East. We will not look for those guilty of “not warning”, “not predicting”, “not having time”, “who should help, and who should not”. Today, it’s time to drop the whole husk, and ask ourselves: who are we - representatives of one big nation inhabiting a huge country, or an impressive group of egoists who are used to discuss other people's problems with a philosophical view, while being implicitly afraid to put themselves in the place of another person.

Recently, we have somehow become too isolated, began to perceive the world around us through the muddy prism of “if someone is in trouble, then this is his problem,” forgetting that trouble can come at any time in every home. So, is it not time to remember that the desire to help the needy is not just beautiful words, it is a real trait of character of that big and, still want to believe, one people, to which we all belong.

The Far East needs emergency care. And we can help our compatriots in great distress. To do this, it is enough to participate in one of those charity events that today hold various funds, publications and associations in different regions of the country. One of these actions is carried out by the First Channel. The action is called "the whole world." And you can somehow relate to the channel itself, to the principles of its work and to the programs that it broadcasts, but to support the initiative to help victims of severe floods - worthy of a resident of a huge country.

To help people who are left without livelihood and shelter, lost property and household, you can send SMS with the word "Together" to the short number 4447. The maximum cost of sending a message is only 50 rubles. For people who do not wish to be limited to 50-ruble contribution, it is possible to send several SMS from your mobile phone or use electronic systems PayPal, Yandex.Money or RBK.Money, having read the rules of transferring funds on the websiteFirst Channel". With the funds raised for those residents of the Far East who have suffered the most from the floods, it is planned to build pre-fabricated and high-quality houses as soon as possible with the necessary infrastructure.

At the time of the preparation of this material, about “The World” received about 61 million rubles from residents of Russia and the CIS. Channel One gives an assurance that the funds raised will be used exclusively to help the residents of the Far East who are victims of the rampant disaster.

PS Theses in the style of "and where is the state and where are the budget funds?" We will try to save for other materials. Now the Far East is waiting for help.